Former teacher from Khotimsk, Tatiana Kovaleva, mastered the loom from scratch in retirement and is now reviving folk traditions 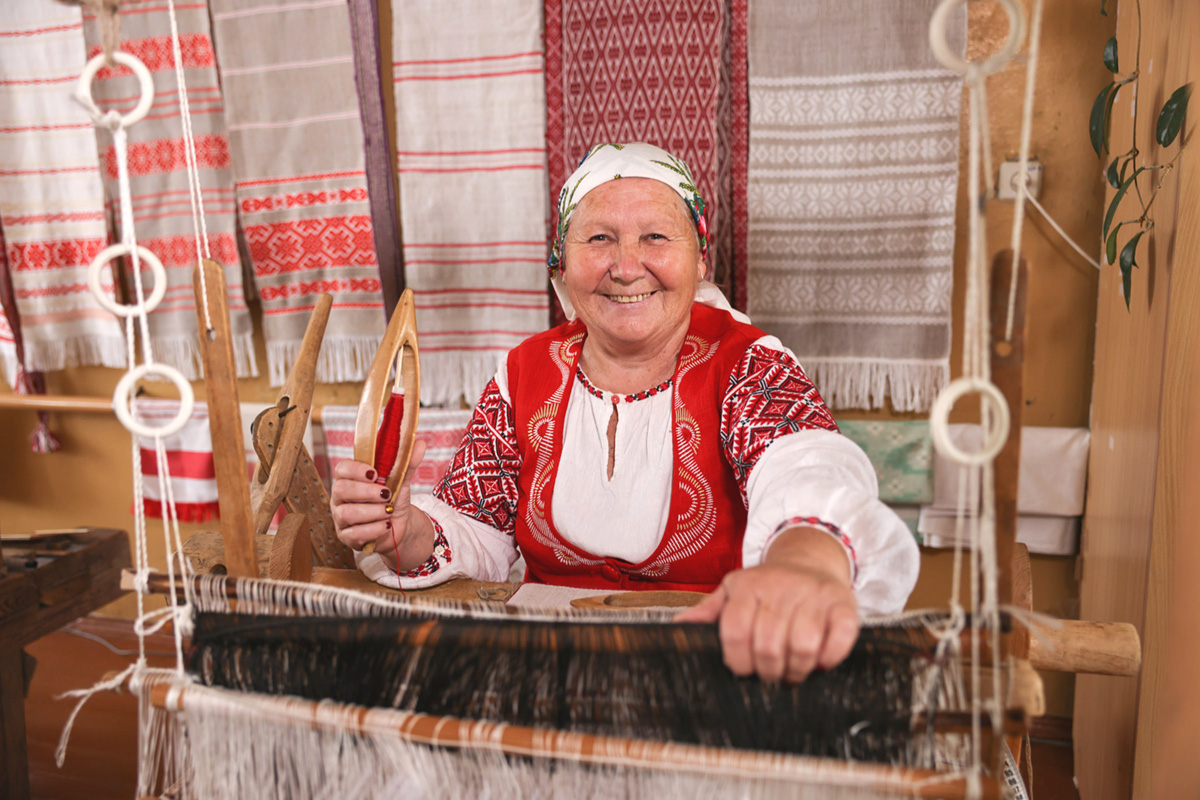 Tatiana Kovaleva arrives at the Khotimsk District House of Crafts by bicycle. She has got used to using this method of transport to get to her favourite work. At 74 years, she is still in the ranks of the workers. She admits that she doesn’t like to sit around. This prompted the former teacher to master the loom in her retirement. Now she is reviving folk traditions: her works are exhibited at international festivals, her items are bought not only by residents of the district centre, but also by guests from neighbouring countries. The craftswoman’s rushniks (traditional Slavic towels with embroidery) and vyshyvankas (embroidered shirts) have even travelled to France where the folk patterns are greatly enjoyed.

A thread with history

Tatiana Kovaleva is from Obol in the Shumilino District. She moved to Khotimsk in her youth with her husband, so considers the district centre to be her second home. For more than 30 years, she worked here as a teacher of chemistry and biology at school №1. She practised needlework in her free time, but more for the soul. When she retired, she decided that there is nothing to sit around for and she needed to look for new interests. The craftswoman recalled,

“So, in 2010, I came to the district House of Crafts, and it turned out that at 74 I have never been out of work! What did I start with? We had an old loom in our centre, which had been idle for a long time, and I decided to get it back to work. But how? After all, I didn’t even know which side to approach it.” 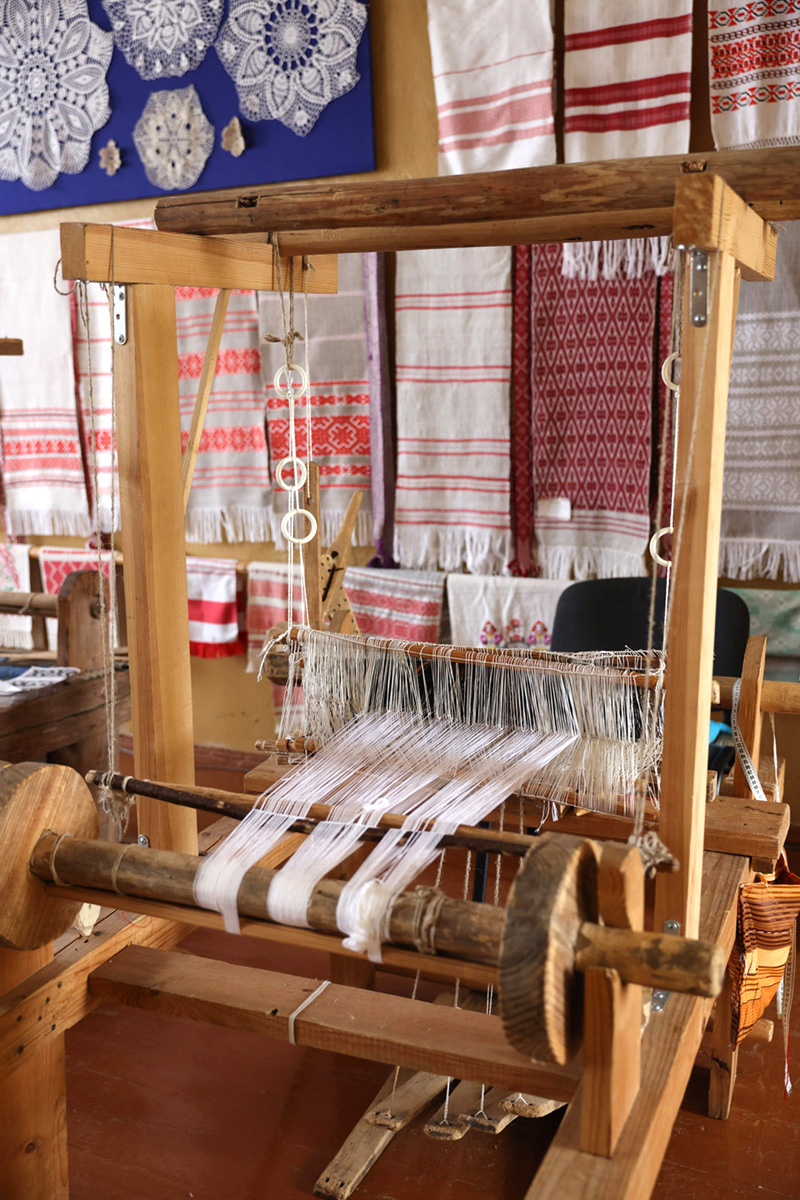 Tatiana Ivanovna began to master a new area for herself through books. The first handbook was The Revival of the Craft with step-by-step instructions: how to thread the machine, what types and techniques are needed. However, knowledge was still not enough. Therefore, she decided to take an adventurous step and went to Mogilev to study weaving courses.
“This is how I got to know the craft from scratch. The more I learned, the more I was amazed at the wisdom of our people. Another time I compare the traditional ornament with hieroglyphs, which have many meanings. So it is here: you add an element to the pattern, which results in another symbol. A small star, for example, represents a person. If you frame it with flowers, it is paradise. Meanwhile, the sun is a rhombus with rays, the earth is the same figure but with rays inside. If you put the sun in the earth, then you receive spring, life. Moreover, in the old times, in order to make it rain, our women wove ritual cloths overnight, and then they carried them around the village, thus encouraging the thunder to rumble. Woven products were used for even more practical reasons,” said the craftswoman, offering us a cultural educational programme. “How, for example, can you wish a person good health? The solution is to present a belt with the desired ornament. Or how to show that you like the guy? To present him with a towel with birds on it. He will immediately understand that the girl has an interest in him. There is a sacred meaning in this. When there was no written language, people expressed their wishes in this way, in ornament.” 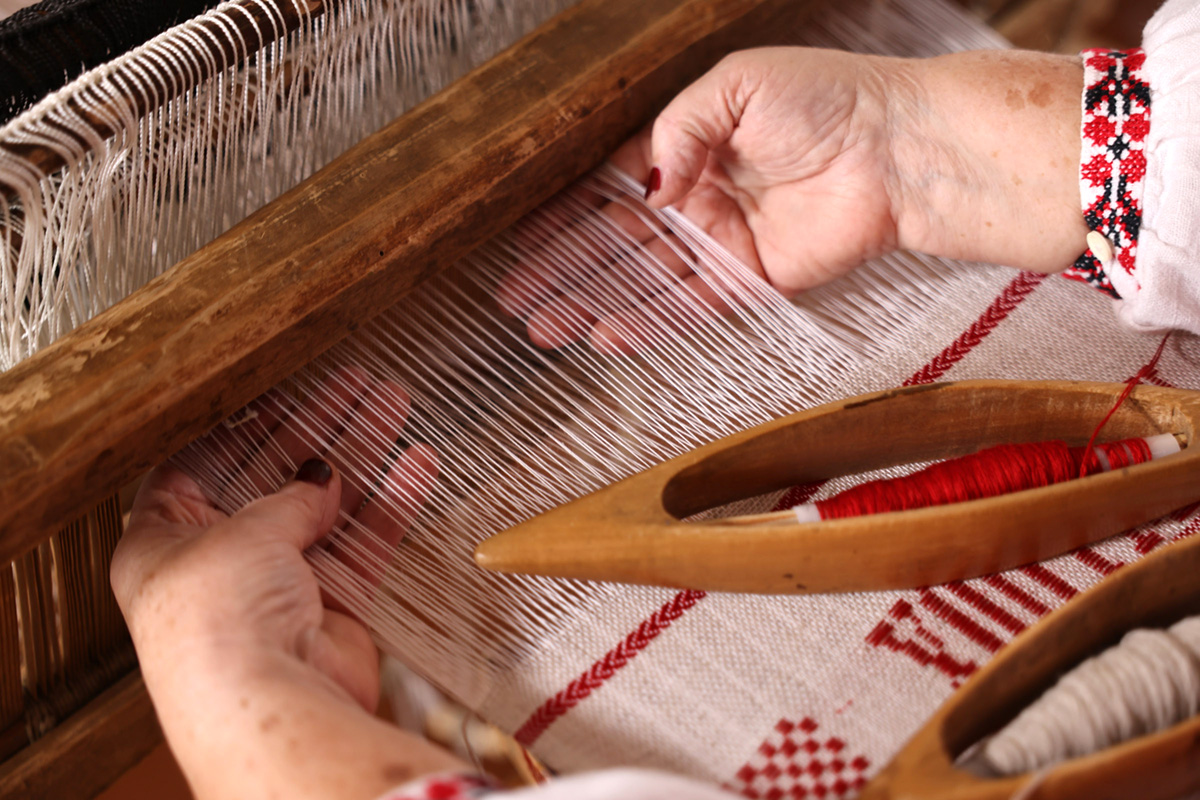 Tatiana Ivanovna has already lost count of how many rushniks she has woven because her works not only travel to exhibitions and festivals but she also makes them to order, “People have become more interested in Belarusian culture. It usually happens that, at the festivals, people come up to me and take my telephone number. Then they call and ask me to weave a rushnik or an embroidered shirt. Or the Russians travel, notice the sign, come in and see that we have such beauty here! There are also regular customers: at the request of Muscovites I made embroidered shirts for various occasions. My granddaughter even took my works to her friends in France and they admired our patterns!”
One of the most special works for Tatiana Ivanovna is a rushnik, which was exhibited in Alexandria in the Shklov District at the Kupala Night Festival this year. It won the first-degree diploma. During her work, the master Kovaleva created a rich collection, which was demonstrated in different parts of Belarus and abroad. The merits of the work were highly praised and, at the beginning of the year, she was awarded the People’s Master of Belarus title.
“I have enough energy, so why not put it into action? For me, weaving is a revival of traditions, a connection between people and nations,” says Tatiana Kovaleva, explaining her love of creativity. “Think about it, in old times, rushniks accompanied the whole life of a person — from birth to their death. They were used in the most important stages of life: christenings, weddings etc. It was believed that a good future wife is the one whose dowry chest fifteen men could not lift. It should contain woven fabrics, embroidered shirts for relatives, belts for guests and rushniks. In addition, the craft for me is the elixir of life. When I see that people are interested in my works, it gives me strength to do even more!”