What will the 2022 budget be like, what will happen to salaries and the Belarusian Rouble, how will we respond to the sanctions and what advice did Aleksandr Lukashenko give to foreign diplomats. Priorities for the next year were discussed at the Palace of Independence.

Issues around the forecast for socio-economic development, budget and monetary policy for 2022 were tackled at a meeting with the President. Aleksandr Lukashenko outlined the main task, “Whatever the sanctions, no matter how much they put pressure on us, no matter what they try to do to us, we must take such measures so that people do not feel these sanctions. At least so that these sanctions and measures from the outside do not determine the lives of people.”

The Government was preparing for a new round of sanctions ahead of time, and even created an anti-crisis headquarters. The Head of State stressed that the Government should deal with these issues in principle, without red tape, clearly and in a military manner. Apparently, the team of Prime Minister Roman Golovchenko is succeeding in this. In any case, the country managed to maintain economic growth and prevent the transfer of most problems into the everyday lives of people, noted
Aleksandr Lukashenko. He named a number of the most important indicators characterising the preliminary results of the economy over ten months.
• Gross domestic product increased by about 2.5 percent.
• Industrial production increased by over 7 percent, in practically all of its subsectors.
• More than 60 percent of Belarusian industrial goods are exported. At the same time, according to the UN, Belarus ranks 46th among 152 countries in the global ranking of countries according to the industrial competitiveness index.
• Exports of goods and services increased by about 33 percent. The country received an additional $8.5bn. A record positive foreign trade balance was formed: more than $2.7bn.
According to the President, the average salary in October came close to Br1,500. Every fourth worker in the country receives a salary in excess of this level, whereas a year ago their share was only 16 percent.
However, the positive indicators should not make the Government complacent. Yes, they are the result of the hard work of the state apparatus and the entire nation but there is also a coincidence of circumstances. Aleksandr Lukashenko believes,
“We were lucky in some respects.

I have already said that today we have benefited from our decision not to shut down the economy and continue working during the pandemic last year. The whole world followed the Belarusian response strategy in 2021. Nobody will say this because Belarus is not America. If the Americans had done it, then they would have trumpeted to the whole world: ‘Oh, Trump and Biden have done well for choosing the right path’. We will not be praised for this. On the contrary, they will be turning up the pressure on us.” 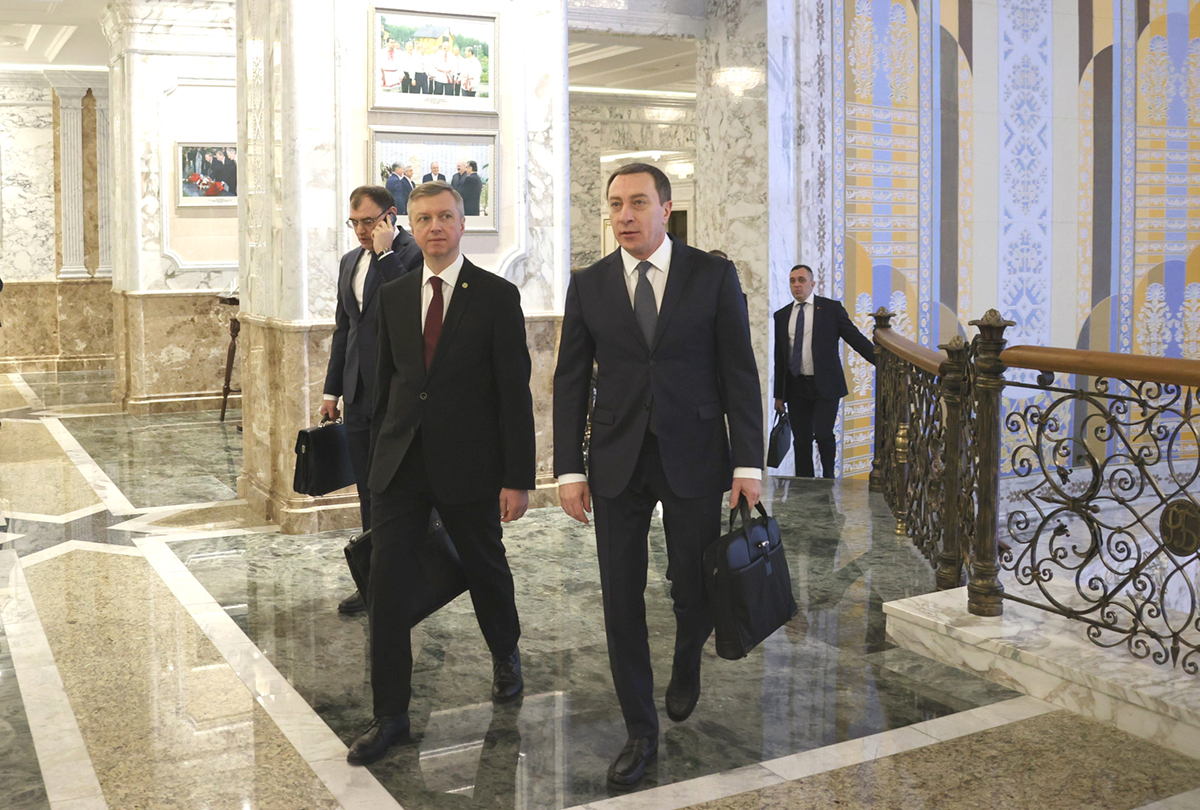 One of the priorities that the Government is proposing for the next year is export. This is reasonable, and the President believes,
“As long as there is an opportunity to sell and gain a foothold in the world markets, we need to act.
We will intensively increase foreign exchange earnings and we will get a strong Belarusian Rouble. The population will stop being cautious and offer their money in deposits or bonds. In this way, we will gradually build up the base for long-term investment.”
This task has been set not only for the Government, but also for the banking bloc, especially considering that the inflow of investments is still sagging. Although the Head of State reminded that the previous cycle and related large projects are practically completed. These include a nuclear power plant, the Belarusian National Biotechnology Corporation, the mining and processing plant in Petrikov and cellulose and paper complexes, with projects in oil refining also being completed.
A separate issue is the situation with public debt and plans to repay it. The President stressed,

“Belarus has always been and will be an irreproachable payer for its obligations. Despite all the difficulties, we must not lose this reputation.”

On the language of ultimatums

Political issues were also discussed at the meeting. Belarus has found itself in the centre of the global confrontation that is now unfolding between the West and Russia, the President reminds once again. He draws attention to the fact that one should not think that there are no contacts; there are channels through which parties talk. At the same time, the collective West moved from requests to firm demands and ultimatums. Aleksandr Lukashenko gave a very recent example,

“They demand that Belarus become like Ukraine. I quote: ‘a democratic, promising, developed state like Ukraine’. We told them straight away that we will never become Ukraine, because we are Belarusians, we have our own vision of our future.”

He expressed his firm conviction that the idea of Belarus turning into another Ukraine is supported neither by the country’s top government officials who are in attendance at the meeting, nor by the general public who want a normal life for themselves and their children.
Referring to the ultimatum, the President addressed the Prime Minister, Roman Golovchenko, “You are a former diplomat, you are tolerating all this, you are not suggesting anything. Those who brought this ultimatum should leave our country no matter what state they represent. Why are we ‘playing nicely’ with them? They seek to do harm to us.”
At the same time, the Head of State added that it has become noticeable that ‘some embassies are packing their suitcases, saying that the president will order them to be kicked out the next day’. Aleksandr Lukashenko tried to calm the alarmists,

“We will not seize their luggage and what is inside. We will not kick anyone out. We will do this in a civilised manner, in accordance with international law. Therefore, those who are packing their suitcases, listen to me: calm down and put your suitcases back. If we declare you persona non grata, you will have time to pack your luggage and leave. Anyway, it is up to you to decide when to do this.”

RESPONSE STEPS
In response to illegal external sanctions pressure aimed at undermining the sovereignty of Belarus and deteriorating the well-being of Belarusian citizens, in order to protect national interests, the Government of the Republic of Belarus decided to ban the import into the country of a number of goods originating from states applying illegal anti-Belarusian sanctions. This was told to sb.by by the Press Service of the Foreign Ministry.
The corresponding resolution will be signed in the shortest possible time. The necessary measures will be taken to fill the domestic market with similar goods from friendly countries.
In response to the illegitimate restrictions on the Belarusian aviation industry, which are based on unfair competition, our country will take similar steps in relation to air carriers from the countries of the European Union and Great Britain.
The lists of persons whose entry into the territory of the Republic of Belarus and the Union State is undesirable from countries that systematically discriminate against Belarusian officials, journalists and representatives of public organisations have been expanded.
As one of the most significant measures to counter external pressure from the collective West and strengthen its economic security, the Republic of Belarus will continue to implement the Union State programmes and strengthen economic integration with the Russian Federation, while building strong trade-economic ties with partners in the EAEU and with countries of the far arc.
A number of other non-public steps will be also implemented. At the same time, Belarus is ready to settle any existing disagreements through a mutually respectful dialogue, taking into account the interests of the parties.