The new star of the Paralympic team of Belarus Valiantsina Shyts: about native village of Boroviki, skis and cow Milka

She smiles and laughs, and cheerful twinkles spark in her eyes. Valiantsina Shyts has just completed her daily training 20 kilometres on the ski run in Vesnyanka, but she doesn’t look tired at all. The start of the next Paralympic season is coming soon, and it promises to be full of tournaments of various levels — both in vast Russia and in native Belarus despite all the intrigues of Western cynics, for whom nothing seems to be sacred. In March of this year, Valiantsina laid high expectations on the Beijing 2022 Paralympics, but sports politics did not allow our athletes to perform there, shamelessly and brazenly driving the Belarusian and Russian delegations out of the Olympic village less than a day before the opening ceremony. 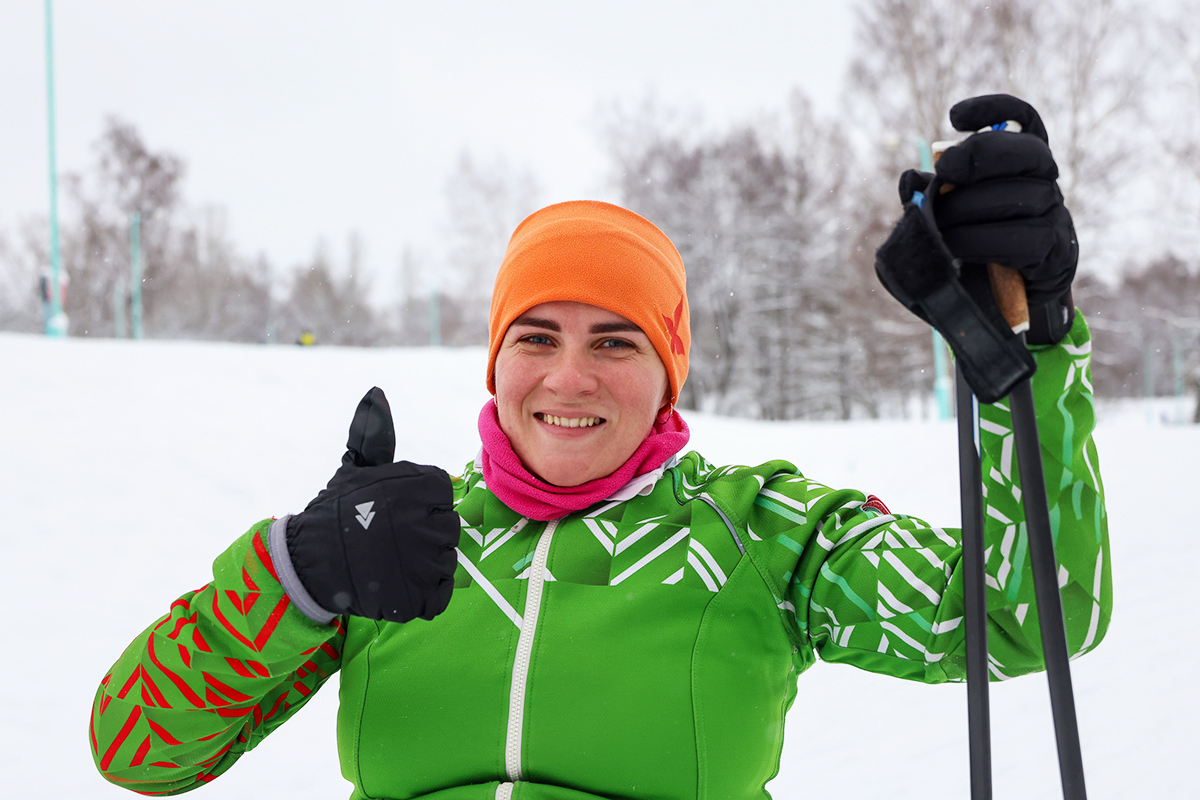 Valiantsina Shyts, member of the national Paralympic team of Belarus

Valiantsina still remembers that day with pain and bitterness,

“I must confess, I cried. From resentment. As well as misunderstandings. I was very depressed. What is our fault? What about sport? Everyone who managed to get to the Games has come a long way and literally suffered the right to perform at these competitions. Fate beat us more than once, we know how to take a hit. But this vile act of people who declare their high morality and concern for physically challenged athletes is impossible to understand.”

Fortunately, by joint efforts Russia and Belarus organised and held alternative ‘We are together. Sport’ Paralympic Winter Games in Khanty-Mansiysk, where Valiantsina Shyts became the main star, returning as a three-time champion in cross-country skiing. According to the decree signed by the President, the winners and prize-winners of these competitions were paid Br64,000 (a little more than $26,000) for gold, Br38,400 (about $16,000) for silver and Br25,600 (about $10,500) — for bronze. Along with this, remuneration was provided for personal trainers, mentors who provided sports training for medallists at the early stages, as well as other specialists of the national team. In a word, everyone got what they deserved, was remarked and supported in this difficult situation.

Paralympic athletes don’t have easy lives, and Valiantsina is no exception.

Her life is a ready-made drama script with a happy ending, where there is a place for deep feelings, despair, love and self-sacrifice, self-confidence and, of course, kind people. Valiantsina was born in 1994 in the village of Boroviki, Svetlogorsk District, in an ordinary working family, where her mother worked as a seller, and her father worked at the Belvtorchermet enterprise. She is the third child, but was born with a trauma. The doctors did everything possible, but soon announced a terrible diagnosis: the girl would never be able to stand on her own feet.
“As a child, I had a dream. When it snowed, it was problematic to move around the street in a wheelchair. The maximum that I could count on was to go down from the porch and stand there. I looked into the snowy white distance and imagined how I was rushing forward towards the burning frosty wind on skis. I was looking for some sticks to push off, and I tried to push towards these dreams of my own along the narrow path that was cleaned,” Valiantsina explains. 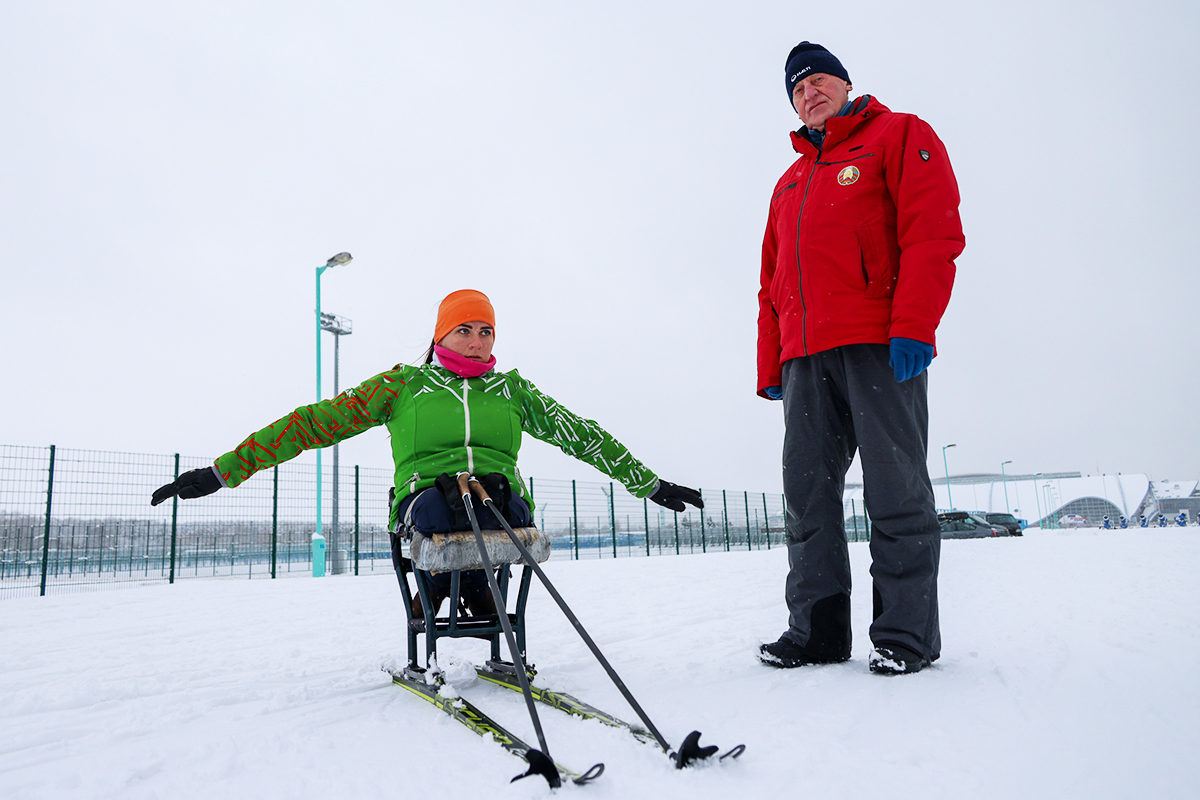 Valiantsina realised that there is a sport for the disabled only in a special boarding school in Osipovichi, where she studied at the age of 13. Her parents made this strong-willed decision through tears, literally leaving their own daughter with watery eyes and a heavy heart.
“It was hard for all of us then. In Boroviki I was surrounded by completely healthy people, I never felt flawed or sick. I was homeschooled until the sixth year of school, and then went to Osipovichi. Honestly, it was very scary! I could not even imagine such a variety of people with all kinds of injuries and diagnoses, because it seemed to me that I was the only one. I was terribly scared. Furthermore, I cried every day and called my mother all the time: ‘Take me, I want to go home!’ My mother’s heart was breaking, I can’t imagine how she survived! But as it turned out later, this was the very first step from which the road to big-time sports began,” Valiantsina says with a smile.
In September, wheelchair races were held between boarding schools in Staiki. The lively Valiantsina was immediately noticed and brought to defend the honour of the institution. And she just won despite everything. And here’s another sign of fate: Yury Buranov, the current coach of Shyts, was the main official at one of the competitions. He suggested that the girl try skiing in a wheelchair. Yury Buranov recalls, “She was not very fast, but I noticed her shoulders — they are very athletic. Since then, we have been working together. Already 12 years. We always set the maximum plans and goals: first or second place, no lower. Our bar is raised high.”
The road to the pedestal was not strewn with roses, she had to go through a lot.
“In general, I wanted to quit sports and go to Mogilev to study as a seamstress after graduating from the boarding school. Together with my friends. But the coach and parents convinced me. They said that such a chance is rare and not for everyone,” the champion laughs out loud.
However, it’s fun to remember this fact now, but five years ago the sky did not seem to be in diamonds. It is not easy even for a healthy person to navigate in a big city, coming from the outback, but how can a girl in a wheelchair cope with everything? The Paralympic Committee helped with the training camp, but this is only a small part of the training programme until she got into the national team. Where to get strength, and most importantly, funds? The solution was found. And it’s an amazing story! Mom and dad sold their nurse — the cow Milka, in order to get money for their daughter.
“They believed in me so much and wanted their youngest daughter to succeed in life that they decided to take this desperate step. I am incredibly grateful to them. And I hope I didn’t let my parents down,” sportswoman remembers.
A couple of years before the Paralympics in Beijing, Valiantsina Shyts and Yury Buranov went to Finland, where they were going to run in the season. In Suomi, on the way to the ski base, they got into ice, the car spun on a slippery road and, as if by someone’s invisible, but strong hand, was thrown right under an oncoming truck. The blow was terrible. Fortunately, it hit the back of the car — the trunk and things lying there were damaged, including a brand new Valiantsina’s wheelchair, which turned into a pile of scrap metal. The coach and the athlete were taken to the hospital in an ambulance, but they were soon released: the coach escaped with bruises, and Valiantsina with a slight shock. God saved, deciding, apparently, that she had already experienced a lot test in her life.
Since then, her results became even better: winter gold at the European Cup in Finland, two silver and bronze at the World Championship in Norway... Then there should have been the same Beijing 2022 and the title of champion. But it didn’t happen. Alas.

“I speak on behalf of all Paralympic athletes of the Republic of Belarus. I want to convey to you our pain and misunderstanding of the decision of the Executive Committee of the International Paralympic Committee to refuse the entire Belarusian team to compete at the 2022 Winter Paralympic Games in Beijing”, with this text — Valiantsina Shyts made a call for justice in June at the 15th session of the Conference of the States Parties to the UN Convention on the Rights of Persons with Disabilities. The only question is: did these words reach the hearts and souls of officials? Or, as usual, they went in one ear and out the other?

“People are different, maybe someone heard. Time passes, but this whole situation still leaves a bitter aftertaste. I have a feeling of injustice. Thank you for not abandoning the country, for supporting and helping us. We all feel it and are very grateful,” Valiantsina believes in the best.
Today, Valiantsina Shyts is known not only in the village of Boroviki, Svetlogorsk District, she is now a well-known personality — Belarus is proud of her! True, since she began to win, and people started talking about her, she did not manage to get out to her native village. Valiantsina knows that they are waiting for her there with impatience, the phone of her mother is literally blowing up because of her friends: where is our champion?
“I will definitely come after the season, in April. Then we will celebrate all the medals. Those that I already have, and those that will definitely be. You’ll see!” she promises.