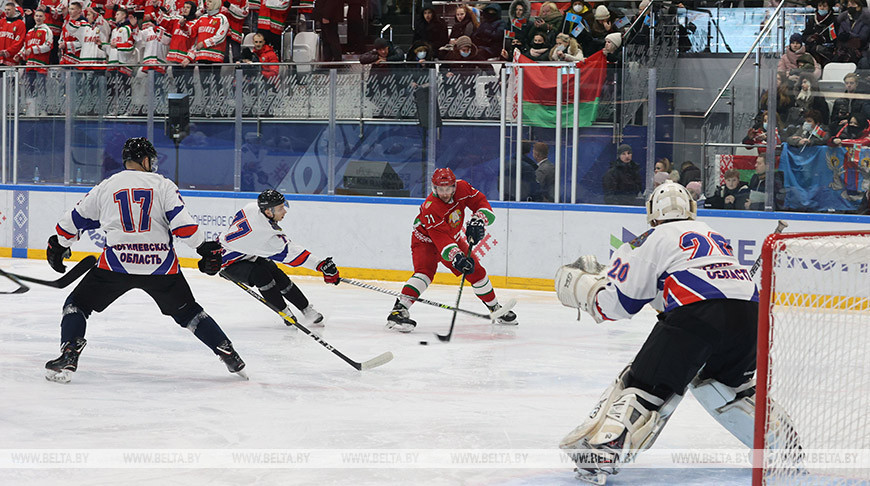 On the ice of Minsk’s Olympic-Arena, the President’s team beat the hockey players of the Mogilev Region – 12:4 (4:0, 4:3, 4:1). For a long time, the rivals failed to open the score, but in the middle of the first period, the hosts hit the gates of Mogilev players four times in a row within just four minutes.

Oleg Bondarev (Mogilev Region) and Nikolai Lukashenko (President’s team) were recognised as the best players of the match. According to a long-established tradition, the fans were not left without gifts either; immediately after the end of the meeting they were presented with dozens of soft toys from the players of the President’s team. Moreover, during the breaks of the match, the most active fans took part in various competitions right on the ice, and winners were given prizes from the President’s Sports Club.

At the start of the tournament, the President’s team defeated the ice hockey players of the Brest Region – 7:3, then beat the team of the Minsk Region – 5:2, and then was stronger than the those from the Gomel region – 8:2.

The ice squad of the Head of State will play the next match on February 12th against hockey players from the Grodno Region.

The hockey team of the President has won competitions among amateur teams 12 times, while ice hockey players from Gomel and Minsk regions also boast one title each.

The organisers of the 15th Republican Amateur Ice Hockey Tournament are the President’s Sports Club, the Ministry of Sports and Tourism, and the Minsk City Executive Committee.