Nine special prizes of the President of Belarus were awarded to art luminaries for outstanding achievements in the sphere of musical, pictorial, decorative-and-applied arts, journalism, folk and amateur arts, training and education of creative youth 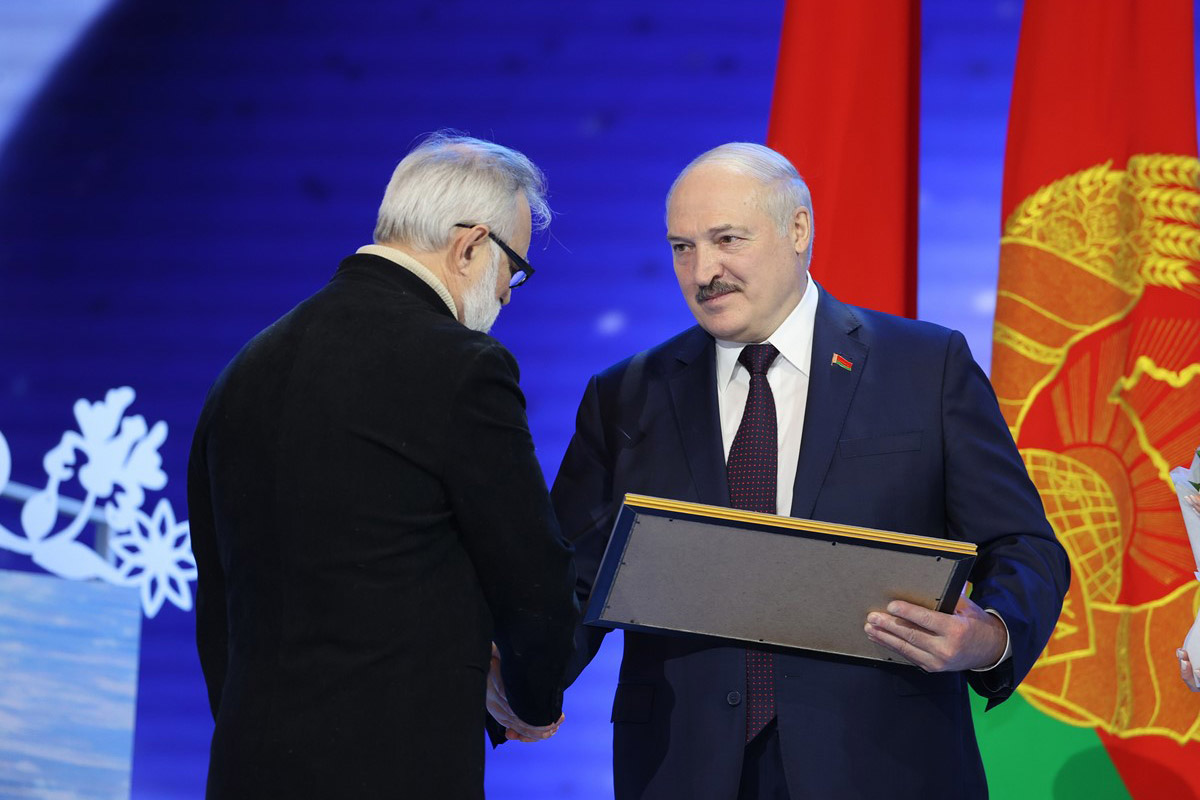 Publicist Yuri Terekhovich does not hide his emotions, “We are immensely proud that our project was given such a great honour. Frankly speaking, it was even somewhat spontaneous. We just wanted to show what is really happening, to reveal the true reasons for what happened in 2020, to bring to light all the intricacies of the so-called ‘opposition’ activities: what is behind this, how this process is managed, where it is funded from, what people and how manage it. We just wanted to convey the truth to our readers. Of course, it is very pleasant and unexpected that the President noticed and appreciated our work. Lyudmila Gladkaya, an observer of the Belarus Segodnya Publishing House, was supposed to stand with us today on the stage, but she is now in fraternal Kazakhstan, where there was an attempt at another ‘colour revolution’, a rebellion according to the same scenario that they tried to play out in Belarus. Instead of enjoying the holiday and getting applause, a fragile girl goes to a hot spot because her conscience and professional duty tell her. This is real journalism.”

Oleg Karpovich, an observer for the Belarus Segodnya Publishing House, is confident that this prize is much cooler than the Nobel Prize, “Especially today, when we understood what the current Nobel Prize is. Our Prize of the President is much cleaner, it can’t be even compared with the Nobel Prize millions. This is the highest award for me. Moreover, Belarusian cartoonists have never received it before. Co-operation with Lyudmila Gladkaya and Yuri Terekhovich was established in the first days of August 2020. We immediately understood what was happening and started working. The events of those days showed that a political caricature is very much needed today, and I think it won’t disappear from newspaper pages: it is simply impossible to do without its sharpness.”

The Reverse Side of the Rebellion project appeared on the basis of the Investigations section of the SB. Belarus Segodnya newspaper and caused a wide response, revealing the mechanisms of manipulating public consciousness and other destructive methods. The texts and pictures of the publications are made at a high professional level. The Belarus Segodnya Publishing House familiarises the readership with The Reverse Side of Rebellion project through the SB. Belarus Segodnya newspaper and through an interactive Internet project.

The ceremony presenting the Spiritual Revival awards, special prizes to art luminaries, and the Belarusian Sports Olympus awards took place on January 11th at the Palace of the Republic.