Since the beginning of this year, 3,500 people have taken tours of the Palace of Independence. Among regular guests is the staff of the Belarus Segodnya Publishing House. 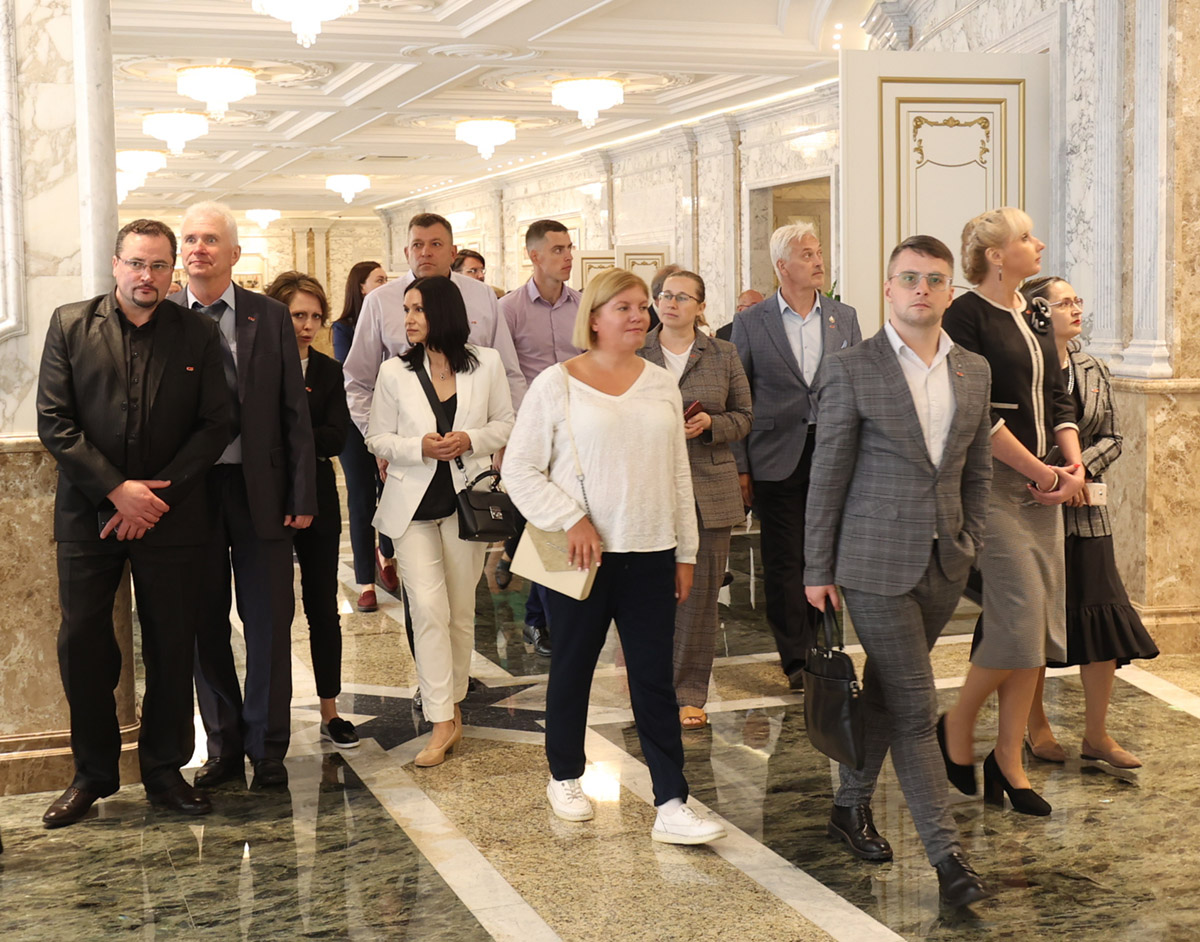 August 2nd marks the 95th anniversary of the publication of the first issue of the SB. Belarus Segodnya newspaper (formerly Rabochy, Sovetskaya Belorussiya). On the eve of this date, the staff of the Belarus Segodnya Publishing House visited the Palace of Independence.
It delights with its scale and surprises with its authentic beauty. History is made within these walls, and the main events that influence the fate of our country originate from here. And all this splendour is available to every Belarusian — such a promise was given by the President. As always, he kept it. It does not matter at all whether it is a child or an adult, a student or a minister, a farmer or a doctor, a teacher or a diplomat. Absolutely anyone can feel at home within these walls. We got a chance to see this for ourselves.


President Aleksandr Lukashenko,
“Nowadays, the doors of the Palace of Independence are open to everyone. Everyone has a chance to visit it both as a guest and as an official, and not due to blood privilege or connections, but due to hard work, talent and commitment to the Fatherland. This is justice — one of the main achievements of sovereign Belarus, a country of absolutely equal opportunities. If we can just preserve it.”
During a New Year ball for young Belarusians in the Palace of Independence, December 29th, 2020.

It is a delight!

Some of our colleagues may call the Palace of Independence their second home, because they spend a lot of time here on official visits and informal celebrations. These are the journalists of the Presidential pool, whose reports and articles can traditionally be found on the front pages of the newspapers of the publishing house. For others — correspondents, publishing specialists, lawyers, proofreaders and photographers — the decoration of the palace and unique details from its life were a pleasant surprise and a good gift for the anniversary of the newspaper. 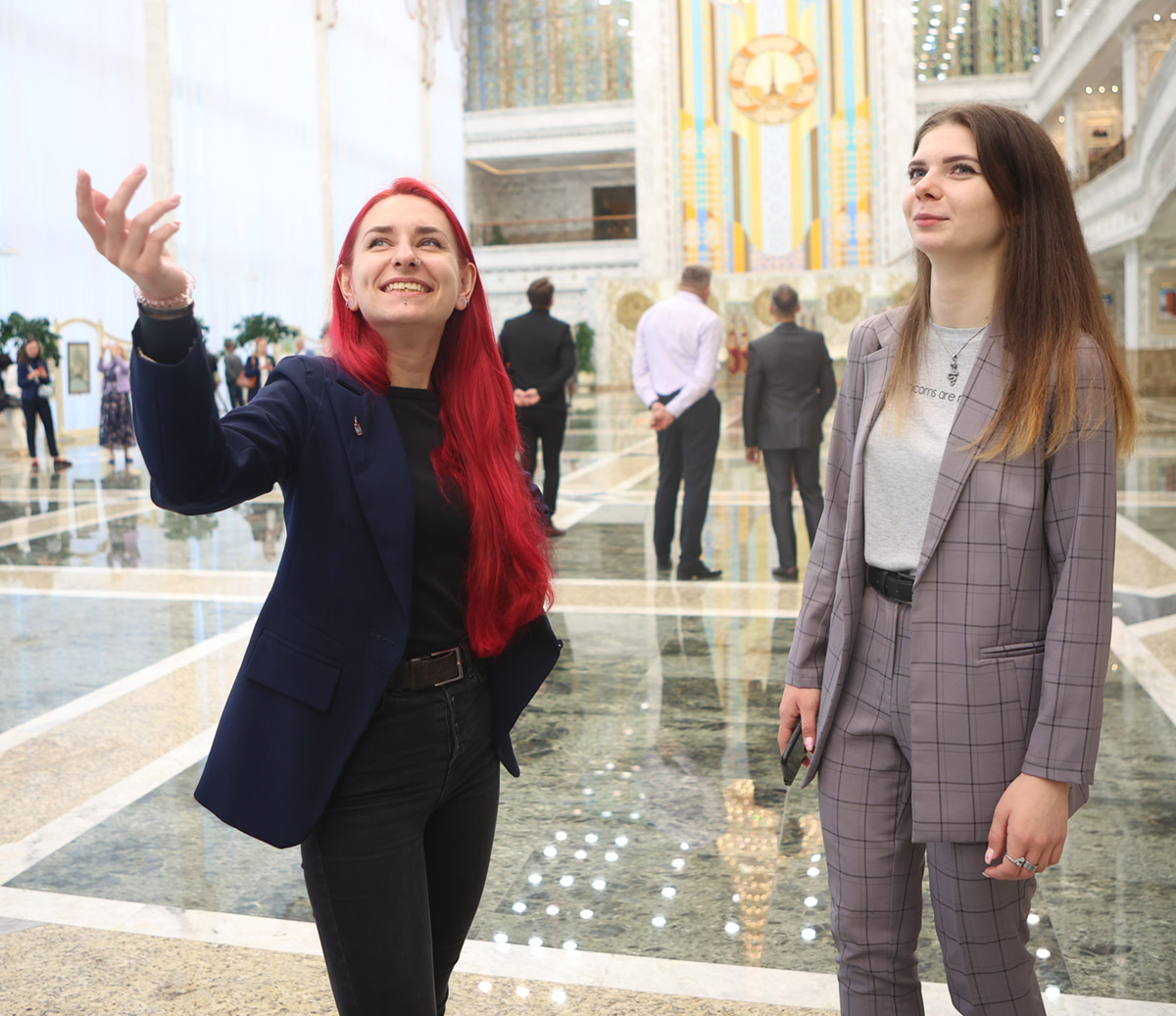 So how not to capture such beauty as a memory? Our special correspondent Daria Staravoytova is spectacularly posing in the entourage of the Winter Garden. During the day she writes news for the www.sb.by website, and in the evening she conquers the catwalks, collecting hundreds of admiring glances. Daria’s Instagram page has been replenished with one more photo, but it will probably be liked more than others, “An insanely beautiful palace, and it is especially pleasant and symbolic that it was built by Belarusians from our domestic materials. However, if you choose a place for a photo shoot, I would definitely recommend you to stop at the Winter Garden. This is a delight! Here is a pleasant atmosphere that beckons relaxation and reflection on the beautiful.”
It’s a pity that sound cannot be transmitted through paper: this timbre would certainly be recognised by every listener of Alfa Radio. The voice of the head of the broadcasting department Vadim Shepet invigorates in the morning. However, anecdotes are not his thing (although everything is possible), but serious socio-political topics that he, together with experts, raises in the ‘Weekdays’ talk show. Your guide to politics and economics was inspired by the Green Hall. 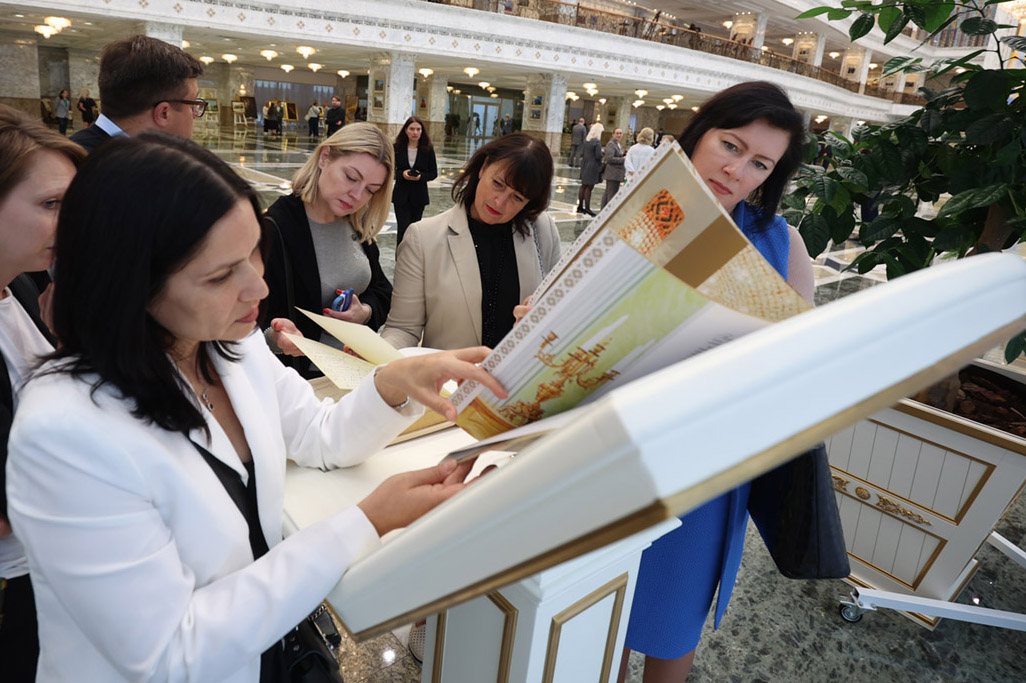 His choice is quite understandable, because here the most difficult negotiations of the Normandy Four took place in February 2015. The meeting had to be organised in a day — and this is a large-scale event, which brought together thousands of people.
True, already in the process, the guests determined that the negotiations would be held in the ‘green room’. Moreover, they never sat down at the table: the 16-hour negotiation marathon was held on sofas.
“For myself, I would call this hall a place of calm, well-being and understanding. It’s nice that there is such an island of peace in the very centre of Europe. As you can see, Belarus is still making the maximum amount of effort to preserve this world. I am sure that the Green Hall is ready to receive the next delegations in order to peacefully resolve the situation that is now, unfortunately, happening in Ukraine,” shared his feelings Vadim.


With a Slavic scope

The Red one is the most ‘functional’ hall in the Palace of Independence, which is also called the expanded office of the Head of State. The most important decisions were made here, and it was especially hot in 2020.
“Already today, when enough time has passed and we managed to defend the truth, the independence of Belarus, it is curious to look back and feel the atmosphere that reigned here in 2020. To be honest, I felt the drive!
Visiting this hall is like riding a bike at speed,” this is how our own correspondent for the Grodno Region Anna Kasper describes her impressions. Moreover, she does it with skill, because a girl with fiery red hair never leaves without motorcycles. 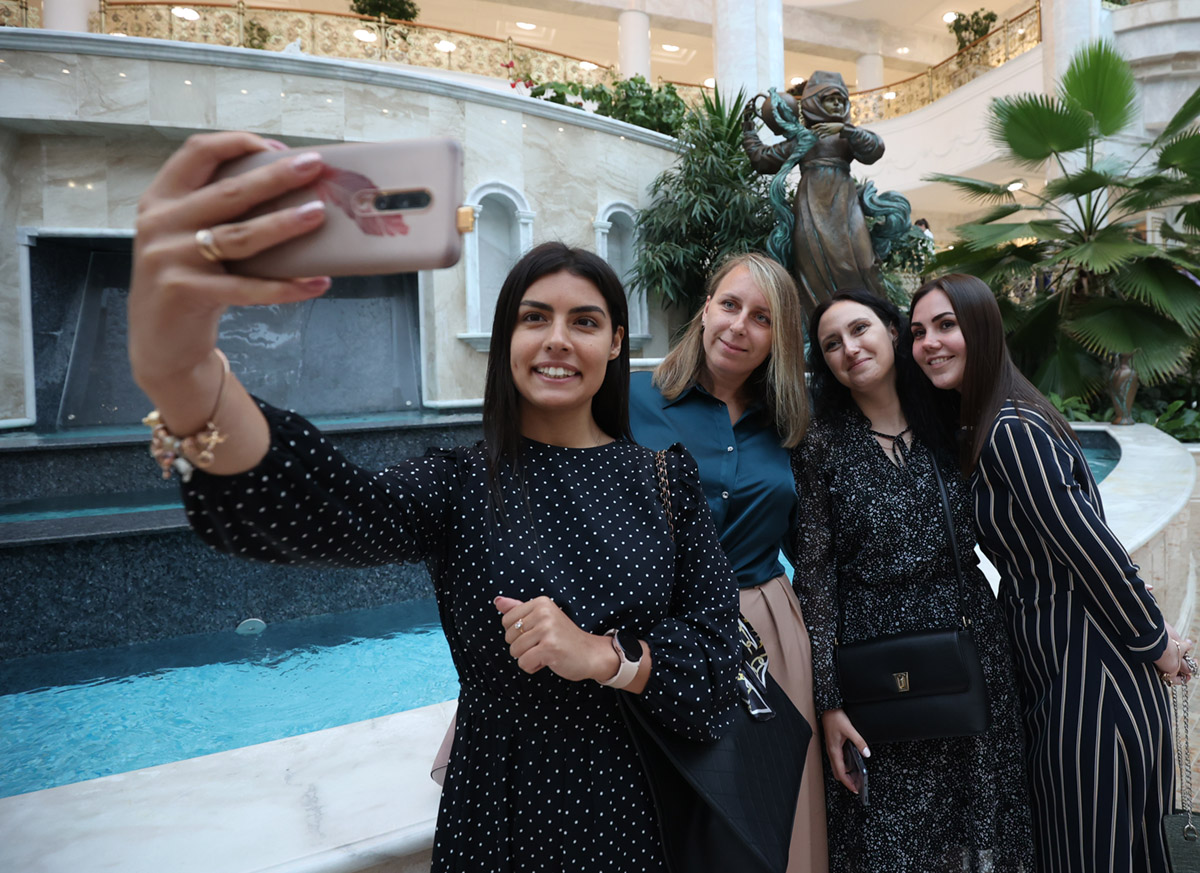 Kind words are most often heard in the Belarus Hall, because here the Head of State presents awards to honoured people of the country. We did not break the tradition either: a compliment to the palace was made by a person who does not need to list regalia — a favourite of readers Andrei Mukovozchik. He summed up in his usual manner, “The palace is magnificent, diverse in atmosphere and sound solution. Here everything is inscribed compactly, but with our reasonable Slavic scope.
How many significant figures have been in this palace, how many decisions have been made that have influenced Belarusian, European and world politics... Here I felt calmness, confidence and pride in myself, the country and our leader.” 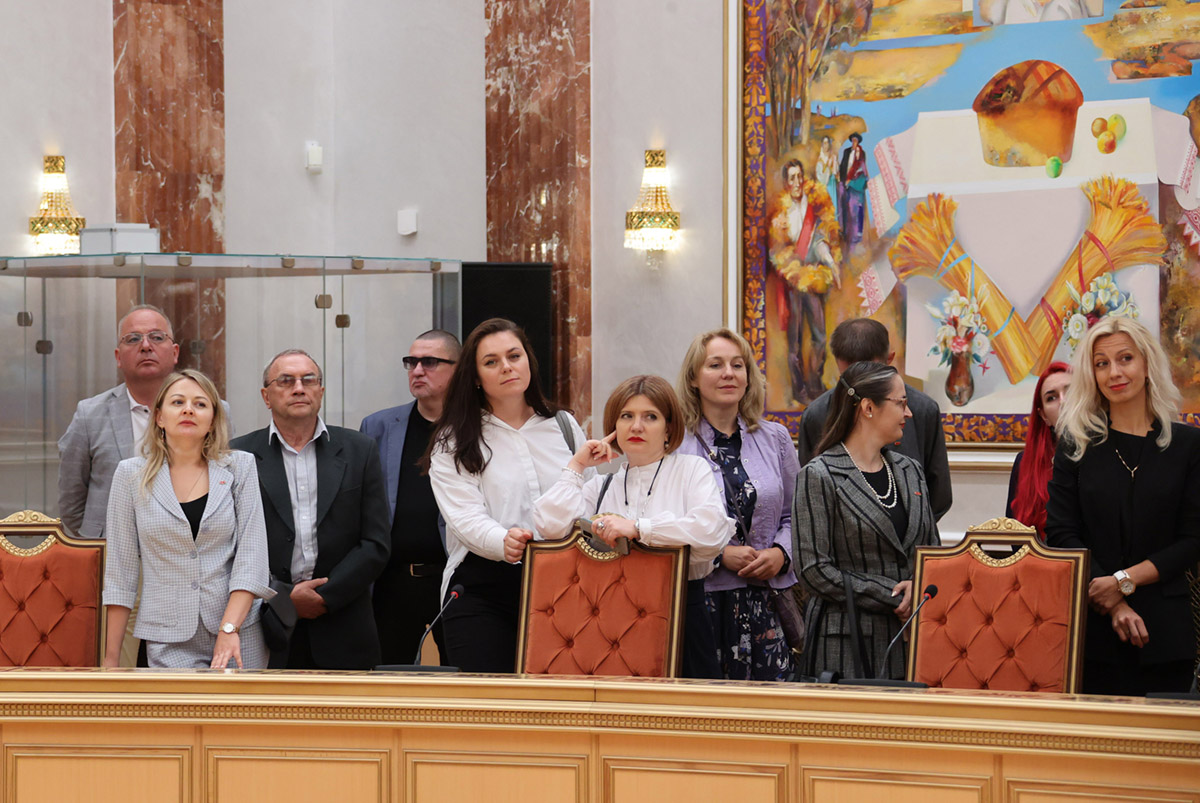 INTERESTINGLY
The Palace of Independence was built in 30 months, although it was originally planned that it would take 57 months to build it. Up to 3,000 of the best Belarusian builders worked at the facility on peak days