Star mission 3.0 completed: Oleg Novitsky tells us about the first experience of filming and emergency situations on board the ISS

Recently, Oleg Novitsky, a Russian cosmonaut of Belarusian origin, returned to Earth from his third stellar expedition. This time, he spent 191 days on the International Space Station. Oleg’s dream came true: he went into outer space three times. The expedition didn’t turn out to be easy: the Russian crew received and integrated the new ‘Nauka’ module with the station, returned the ISS to its original position when the suddenly turned-on engines of the new module deployed it, and looked for the source of smoke on the ‘Zvezda’ module. Oleg had a chance in manual mode to re-dock the ‘Soyuz MS-18’ manned spacecraft from the ‘Rassvet’ module to ‘Nauka’ module. In addition, for the first time in history, the cosmonauts met a film crew on board the ISS and took part in the filming of a feature film. Now Oleg Novitsky is in the Moscow Region, on rehabilitation. His programme is full, but the cosmonaut found time for a conversation with our correspondent. 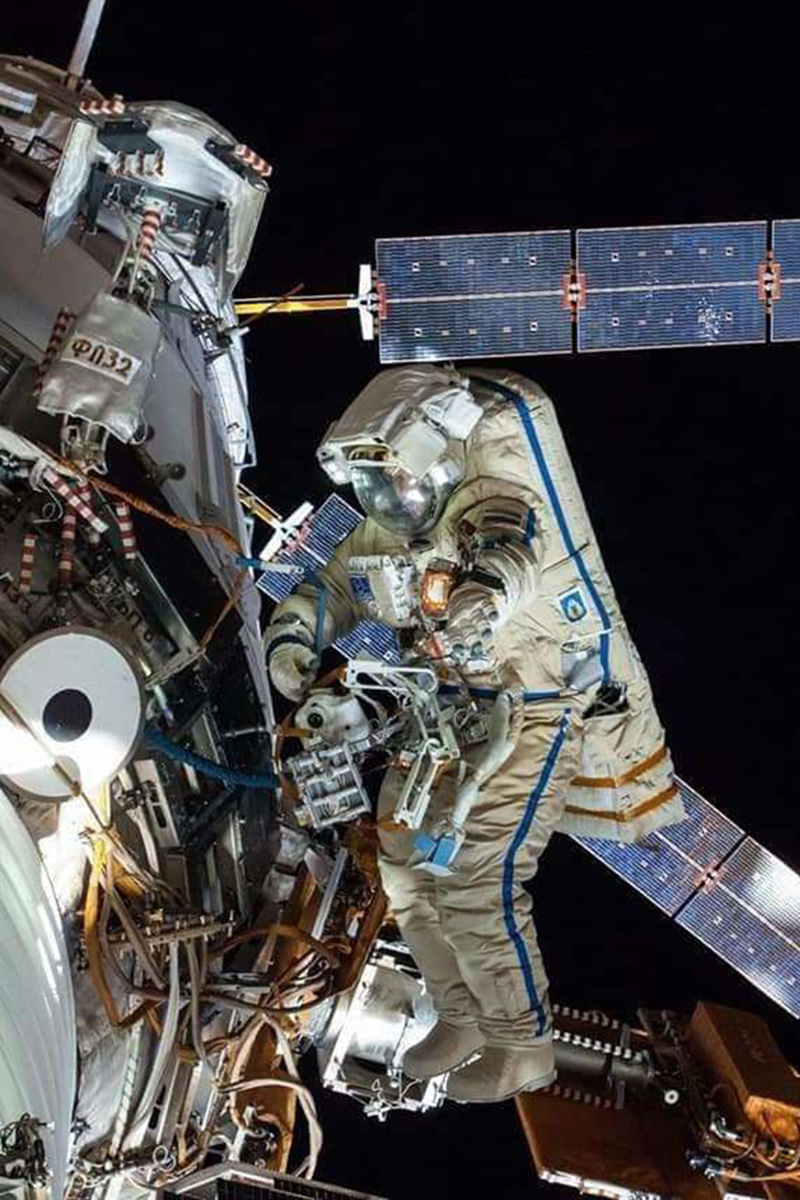 On the third expedition, Oleg Novitsky
went into outer space three times
“I have literally ten minutes,” the retired colonel warns us in a military manner. “Then a two-hour training session will begin, followed by rehabilitation. The evening belongs to my family...”
Oleg Novitsky returned to Earth on October 17th. Together with him, actress Yulia Peresild and director Klim Shipenko were on board the ‘Soyuz MS-18’ descent vehicle. This miniature film crew spent twelve days on the ISS, working on a film with the working title Challenge — about a female doctor who went to the ISS to rescue an astronaut. For the first time in history, the descent to Earth was carried out by one professional cosmonaut.
“The landing took place as usual, without any incidents. The crew’s help, of course, is required for the commander since the spacecraft is not adapted for the flight of one person,” said Mr. Novitsky, commenting on the event. “But Yulia and Klim underwent serious special training before the flight to the ISS. Moreover, a few days before departure, the crew conducted a final training session with an instructor on Earth, during which the cosmonauts refreshed their memory of everything they’d learned during training and worked out various landing plans, including in the event of an emergency. So, the guys were ready and provided me with the necessary help where, for instance, I couldn’t reach on my own such as with the cabin fittings.”
Cosmonauts are, one might say, recognisable because they have to give interviews and take part in press conferences. However, for the first time in their lives, Oleg Novitsky, Piotr Dubov and Anton Shkaplerov got the experience of filming in a feature film. Did acting talent awaken in them, how did they manage to combine acting with the performance of immediate duties and tasks? It turns out that everything can be done if you strictly follow the plan and orders!
“The plan for work in orbit also included work on the Challenge project,” explains Oleg Novitsky prosaically. “It was necessary to maintain the time frame, to combine so that the work on the film was not to the detriment of space experiments, activities to maintain the operation of the station itself and its systems and the members of the film crew understood this. The workload increased, of course, but it was interesting. We were faced with the task of fulfilling the orders of Klim and Yulia, because they have rich experience in the field of cinema. We just listened to what they were saying and tried to do it exactly...”
Oleg Novitsky didn’t talk about the roles that the cosmonauts had a chance to play; they say, the director’s realm begins here, perhaps he still wants to keep the details secret.

‘Everything can be managed’

From the Earth, the impression was that the third space expedition for our compatriot was especially rich in emergencies: either the ‘Nauka’ module suddenly turned on the engines without permission, while even turning the ISS, or the ‘Soyuz MS-18’ manned spacecraft had to be docked manually from the ‘Rassvet module’ to a new module, then there was smoke on the ‘Zvezda’ module... 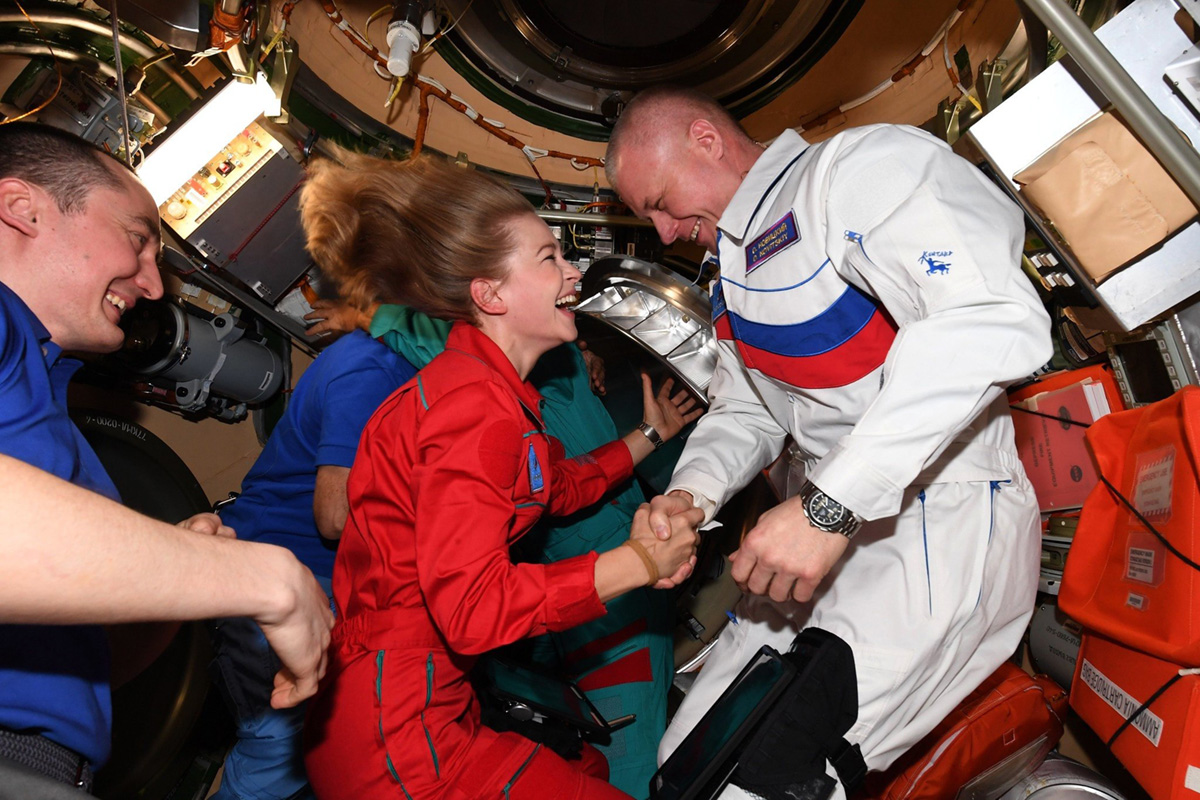 For the first time in history, astronauts met a film crew on board the ISS

“This is technique, anything can happen to it,” Oleg Novitsky notes philosophically. “Such incidents always come as a surprise, but they’re not critical. After all, the crew is prepared for different situations, Flight Control Centre immediately joins in and everything can be managed, which we did. For example, to compensate for the impulse given by turning the ‘Nauka’ engines, the engines of the neighbouring ‘Zvezda’ module and the ‘Progress’ cargo ship were launched.”
In the third stellar expedition, Oleg Novitsky’s dream came true: he went into open space, and not once, but three times. However, this cannot be called pleasure, because the cosmonauts worked hard for seven hours in a row. It’s impossible to imagine: in the infinite Universe, connected to the ISS with only two safety tethers, they prepared the station for undocking the ‘Pirs’ module, which had served its time; its place was taken by the ‘Nauka’ module, they also performed works on integrating the new module with the station and connected the local cable Ethernet networks.
“Open space has more than met my expectations,” admits Oleg Novitsky. “It’s hard to put into words — interesting, exciting. There was no time to admire the planet, since the exit programme turned out to be very busy, it was necessary to meet the schedule. But there are breaks in it to rest your hands for a few minutes. That’s when we looked around. The Earth looks beautiful!”
Oleg speaks carefully about his plans for the future, “Now the primary task is to recover and return to duty. Everything in the world is changing so quickly that it makes no sense to think far ahead. I know that very interesting space programmes are coming, and the tourists, apparently, will already fly... Of course, I would like to join the fourth space expedition!”

Grass near the house 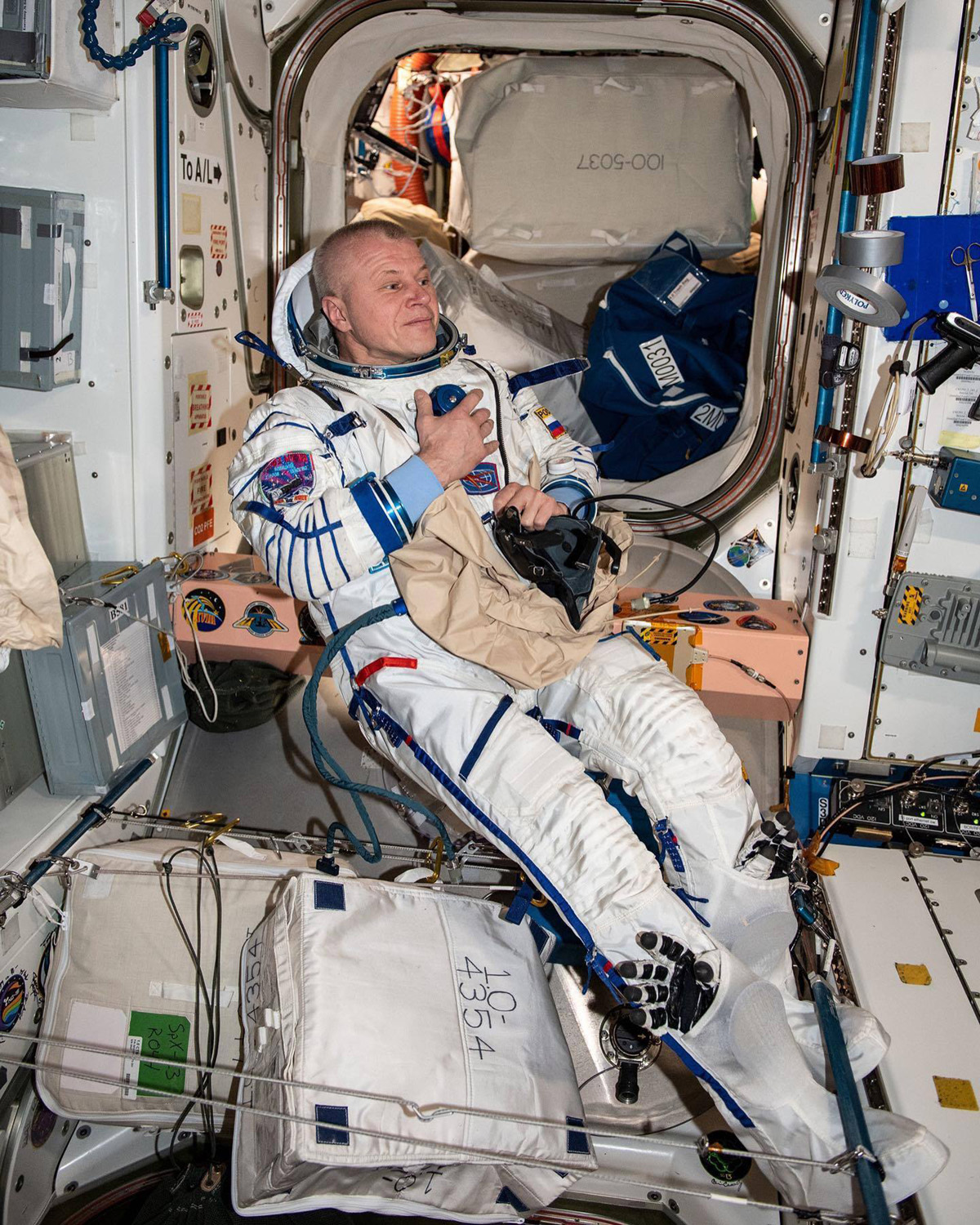 Preparation for the crucial operation of re-docking of the ‘Soyuz MS-18’ manned spacecraft to the newly arrived ‘Nauka’ module
It is highly likely that after rehabilitation and rest in the sanatorium, Oleg Novitsky will come to his small homeland, to the town of Cherven, where his mother is always waiting for him.
“We talked on the phone almost every day. Rather, Oleg called, I could not call there,” said Valentina Novitskaya. “He dialled my phone number in the morning on October 12th, on his 50th birthday. I congratulated him on the phone, and in advance all the family members and I also filmed video congratulations and Yulia — my daughter-in-law — sent them into orbit through the Flight Control Centre. Every snapshot, every video from Earth is a great joy not only for Oleg, but also for everyone on the ISS.”
Valentina Novitskaya is sure that, despite COVID and related restrictions, she will meet with her son before the New Year, “Everyone went through quarantine, was vaccinated, so everything is ok with health in this regard. Now Oleg will take a test for antibodies, if the amount is insufficient, he’ll be vaccinated again. I was also vaccinated, and if you want to know my opinion, everyone should be without fail! I know from a very good doctor and a decent person: there is not a single vaccinated person in the intensive care unit of our district hospital!”
For her son’s birthday, Valentina Novitskaya has a gift that was more material than a video greeting but would not reveal the secret: let it be a surprise for Oleg!