A hybrid war has been unleashed against Belarus, the purpose of which is to eliminate a competitor. The Government effectively resists external pressure. What other topics have been tackled by the President of Belarus at a meeting on countering sanctions measures.

There is little good in sanctions. But it is also a chance to find new growth reserves. Judging by the performance of the economy this year, the Government is able to find effective counter-instruments. Both GDP and exports are growing. Aleksandr Lukashenko urges people not to slow down, and also to take care of each other, “As the Prime Minister reports to me, there is no drama in the Government. I like the attitude to oppose sanctions. This is how we should work... We need to do everything so that ordinary families and work collectives do not suffer in any way because of our fugitive traitors and their western sponsors-curators who run around Europe and America, begging for sanctions against Belarus.” 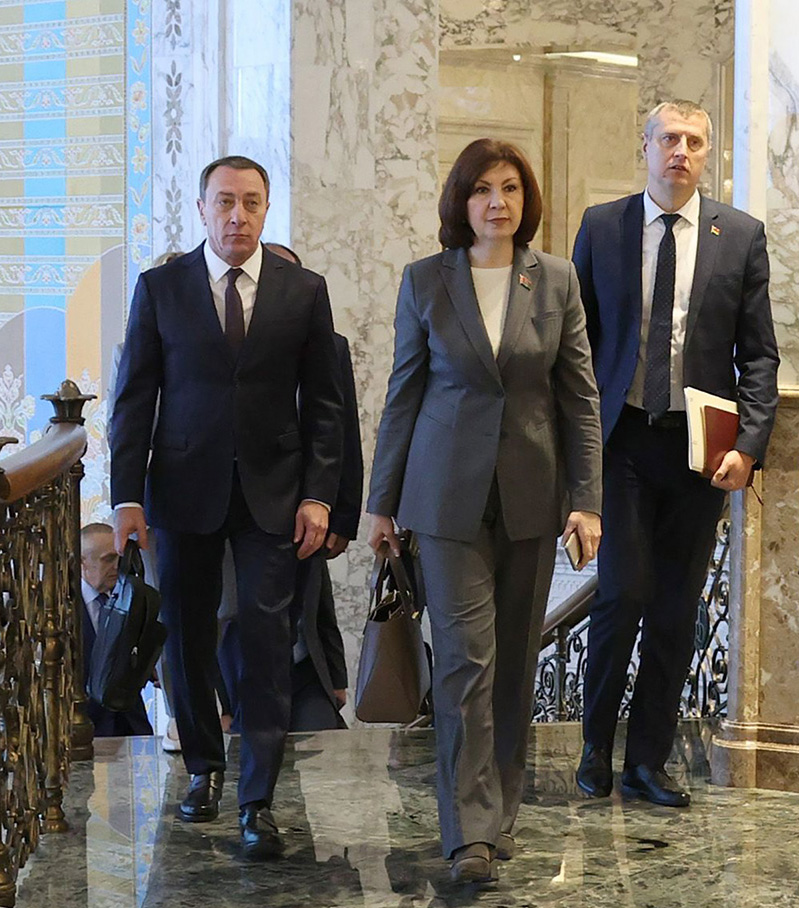 Participants of the meeting: First Deputy
Prime Minister, Nikolai Snopkov, Chairperson of the Council
of the Republic, Natalya Kochanova, and Deputy
Head of the Administration of the President,
Dmitry Krutoi

The President noted that today no one doubts that the main purpose of this frenzied blackmail is not the fight for some mythical human rights or the revision of the election results. According to the President, this is also evidenced by the data of the study of public opinion, and not only by Belarusian experts, “I closely follow the media in Russia, America, Europe and in Belarus.
In Belarus, westerners conducted sociological research, as a result of which the Belarusians unequivocally stated that no Tikhanovskaya had ever won the election and they admit that the current President has definitely won.”

The Head of State pointed out the true motives of the sanctions pressure, “The goal is to eliminate direct competitors, ruin, destroy key enterprises, and ultimately strangle our economy. And, to put it bluntly, drive people into poverty through the closure of factories and massive unemployment, and at best — to bring them to the streets. We cannot and will not allow this.”
Aleksandr Lukashenko calls a spade a spade. A real hybrid war has been unleashed against Belarus and economic pressure is just one of its elements, “Today we are talking about the economic component, about the economic block of this hybrid war. Hybrid warfare consists of opposition and media warfare. You see, this is the most important area of influence on Belarus. This is an economic war. This is a political war. And in all other areas too.
We need to not only promptly and coherently respond to all challenges, but also actively take preventive measures.
This is what we agreed with the Government: not to wait for December, but to look for ways out of the current situation.”


Belarus is awaited by foreign markets

The Head of State recalled that Belarus has an open economy, “It is more than 60 percent tied to exports and foreign markets.”
The Head of State recommends the Government act decisively in all directions,
“The attempts to restrict and intimidate us turn against the business and economy of the country that imposes the sanctions.”
Aleksandr Lukashenko drew attention to the fact that the Baltic countries, Poland and Ukraine have already felt the negative consequences of the sanctions against Belarus. The Head of State stressed,
“You understand that we are not somewhere in the corner of a planet or some region. We are at the very crossroads, and it is impossible to close the country, which is located in the centre of Europe. This is crazy. Moreover, we have always been reliable partners in all markets.” 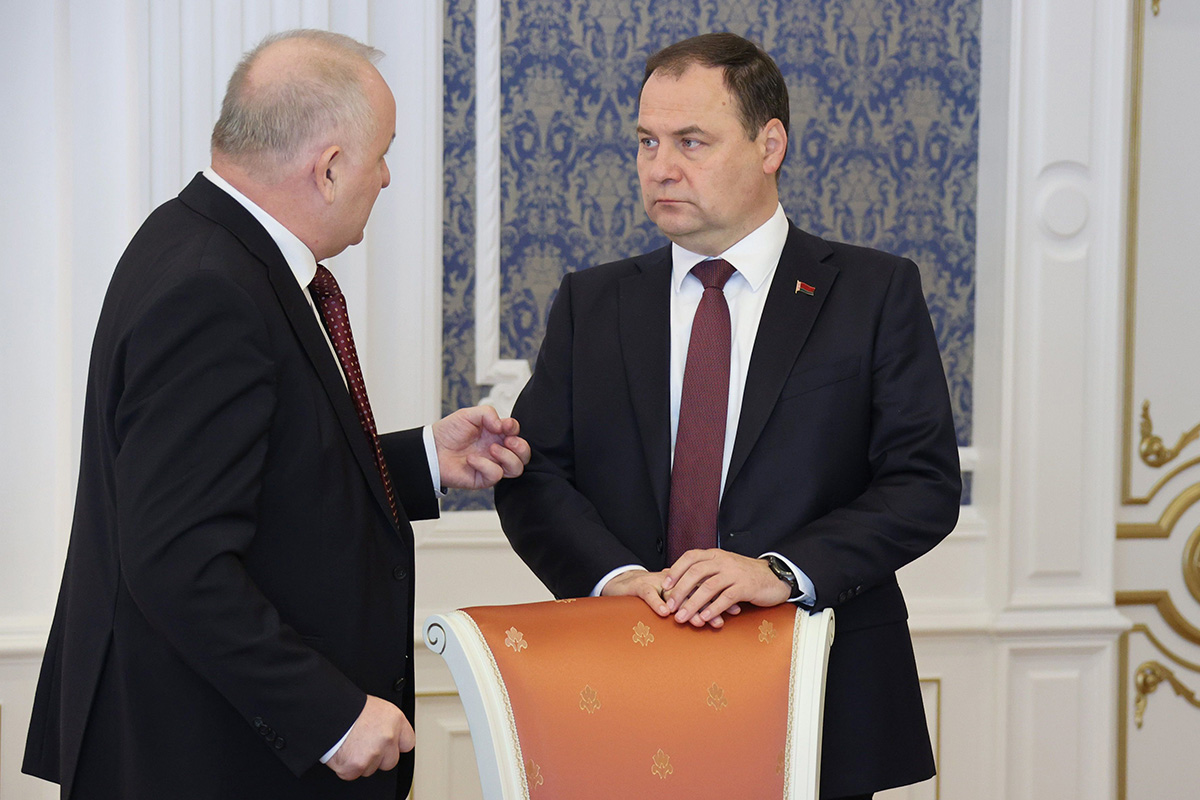 Chairman of the Board of the National Bank
Pavel Kallaur and Prime Minister Roman Golovchenko
The President orients the Government towards a close study of promising territories, “We are looking especially closely at the African and Asian regions, where as many as 5.5 billion people live — 70 percent of the population [of the planet]. And there everyone wants to eat, but in order to eat, you need to have equipment. We have both. Yes, the current situation is a challenge for us. We are out of our comfort zone or we can get out. But at the same time, it’s a moment to open up new opportunities, to mobilise and achieve results, regardless of any pressure.”
In this vein, Aleksandr Lukashenko cited the Russian Federation as an example, “They closed, as they thought, Russia, and Russia — discarding all the issues — looked at its internal reserves and took a giant step forward. This especially tackles those areas that have already been ruined since the mid-90s. But together we can do more!”
According to Aleksandr Lukashenko, this was also discussed during a telephone conversation with Vladimir Putin before the meeting, “We can, we must, and Russia is ready to co-operate together across all areas that Belarus needs. It is for us to decide.”
According to the President, so far this has been achieved, “The results of the economy for eight months are significantly higher than the forecasted figures in terms of production, exports and incomes of the population. I have already said that the key task is to maintain these dynamics until the end of the year. And it will be a huge success, if not a feat.”
Separately, the President inquired about the situation in the potash, oil and aviation industries. At what stage is the agreement with the Russian Federation on seaports and on the opening of new routes? Not forgetting about the old ones.
“Taking into account that special groups have been created in the Government, I would ask you to provide information as concretely and to the point as possible, without going into details. If you need to resolve issues quickly, then there should be no red tape. Once again, I would like to draw the attention of all coordinating bodies. There should be no bureaucracy, all issues should be resolved as soon as possible,” the Head of State said as he outlined his requirements.

Analysing the results of the meeting in an interview with journalists, Belarus’ First Deputy Prime Minister, Nikolai Snopkov, drew attention to the fact that the Belarusian economy is now demonstrating balanced and high-quality development,
“Three percent GDP growth is a good percentage and it is on a balanced basis. This is confirmed by the growth of exports, which increased by $6.5bn.
For the first time since 2013, we have a high foreign trade surplus of $2bn. This is an excellent indicator, I’m not afraid of the word, which forms the gold reserves, currency stability, peace of mind of people, and a normal economic atmosphere in the country.”
The First Deputy Prime Minister added that these trends should continue in the coming year. At the same time, he drew attention to the fact that the sanctions in this situation also affect us,
“But it’s not for nothing that a wise Chinese proverb says that any crises are opportunities. Our capabilities are that we look at the situation from a different angle, evaluate business processes, export strategies and the ability of enterprises to purchase components.”

Nikolai Snopkov is also confident in stable supplies of Belarusian oil products and potash fertilisers to foreign markets, “Both the export of potash and petroleum products will be carried out on the basis of economic feasibility. Nobody says that now the export will stop. These are, I would say, just psychological statements on the Internet. Business will put everything in its place. The global market demand for these products will put everything in its place.”
Nikolai Snopkov recalled that some time ago, long-term contracts for the sale of Belarusian potash were concluded at the rate of $210-215 per tonne.