Aleksandr Lukashenko has met with the Chairman of the Board of the Eurasian Economic Commission, Mikhail Myasnikovich, today 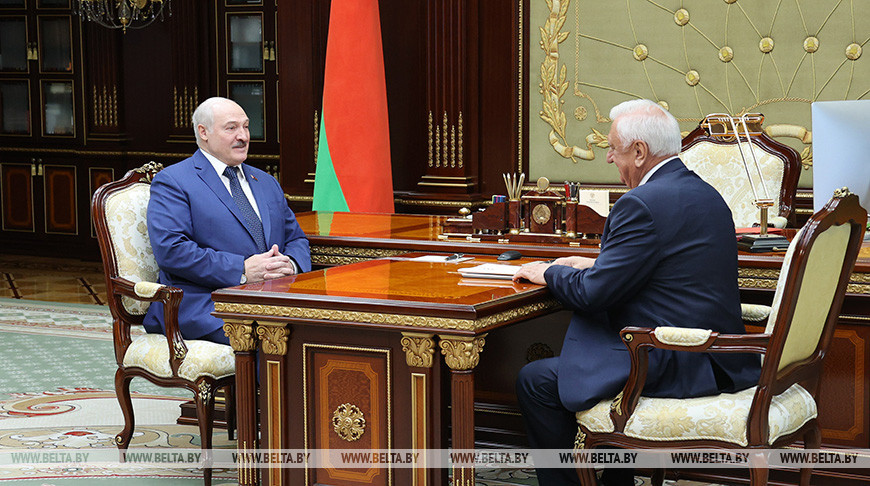 After the meeting, Mr. Myasnikovich shared some details of his talk with the President, “We had a comprehensive conversation, including my report on a whole range of topical issues related to the Eurasian economic integration. I am very grateful to Aleksandr Grigorievich for his interesting, I would say, bold proposals to deepen integration.”

The Chairman of the Board of the Eurasian Economic Commission explained that they primarily concern the agenda of a meeting of the Supreme Eurasian Economic Council scheduled to be held on May 27th in the format of a videoconference. It was earlier planned that the event would be held in Bishkek, with 14 issues on its agenda. At the same time, as Mr. Myasnikovich noted, the Belarusian leader focused on the issues that are much broader than those provided for by the forum agenda, “Much attention was paid to the issues of perspective: what should the Eurasian Economic Union be like after 2025. Until 2025, the EAEU Development Strategy is operational; it was approved by the heads of state in December 2022. What will happen after 2025? In this regard, there are issues related to investment co-operation, establishment of joint companies that will feel confident enough in the domestic market to produce goods in demand on world markets.”

According to Mr. Myasnikovich, in this regard, the President touched upon the topic of development institutions: they should be represented not only by the Eurasian Development Bank, but also the Eurasian Fund for Stabilisation and Development, as well as internal sources. “Now is the time when it is necessary to seriously invest in creation of new projects – primarily, import-substituting ones. I have accepted all these issues for further study, so we will have a very interesting conversation at the meeting of the Supreme Eurasian Economic Council,” he said.

On the eve of the meeting, on May 26th, the first Eurasian Economic Forum will also be held – gathering the EAEU heads of state via a video link. The interest in the upcoming event is very high, including from far-abroad countries.

“This indicates that our Union has succeeded, and it arouses interest among others. A number of states are studying the possible pros and cons of close co-operation directly with the EAEU," Mr. Myasnikovich stressed.