The Turkish Coast Guard announced on Sunday that traffic in the Bosphorus Strait was suspended, BelTA reports with reference to TASS 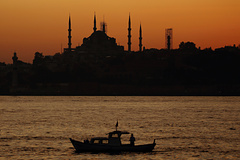 "The passage of all ships in both directions in the Bosphorus Strait is temporarily suspended due to the failure of bulk carrier Brave Knight," the department noted.

According to the Anadolu agency, the ship broke down near the Yavuz Sultan Selim Bridge while it was travelling from Turkey to Romania.