Everything that was acquired by overwork could disappear and turn in latters: hard work in training, expectations and ambitions, faith in goodness and justice. Belarusian swimmers were suspended from participating in international tournaments, equating them, presumably, with a type of especially dangerous strategic weapons such as a nuclear submarine or missile cruiser. It is difficult to say what a threat to universal democracy and a danger to world liberalism Ilya Shimanovich and Anastasiya Shkurdai may pose, but such is the twisted logic of the modern world today, which wants to force everyone to think in a single paradigm, drive them under the stove and do not rock the boat. Rough communication in the ‘who the hell are you?’ style has long been the norm for the Western establishment. Including in sport. And in this regard, the Friendship Games, which are being held in Kazan, look like a completely otherworldly phenomenon — an island of dignity and independence. For the national team of Belarus and Russia, they have become a substitute for the World Aquatics Championships. 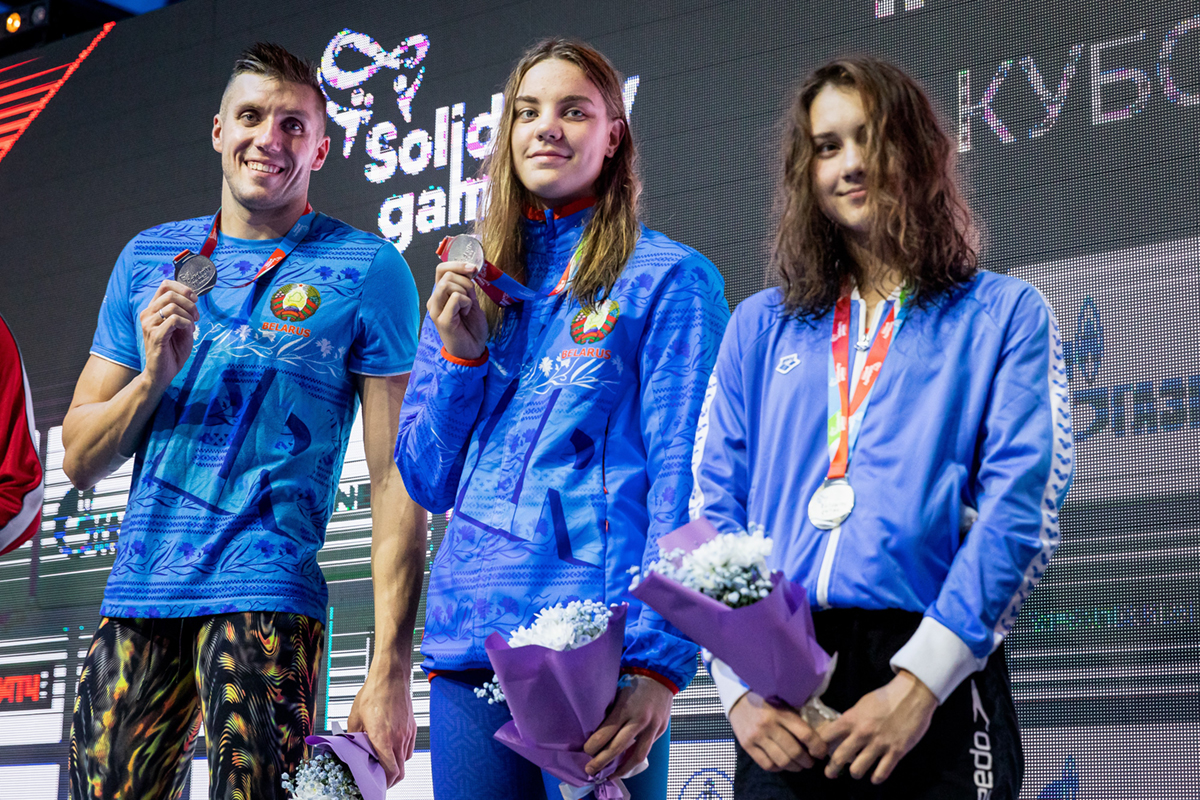 
Friendship begins with a smile

The World Aquatics Championships took place in Budapest at the end of June, but according to new world trends, athletes with Belarusian and Russian citizenship were not allowed to enter this members club. The Friendship Games in Kazan, whose programme included swimming, diving and synchronised diving competitions, brought together athletes from 16 countries, and became something of a Goodwill festival, which during the Cold War period acted as a kind of alternative to the mired in politics Olympic. There are no boycotts here, everyone is equal here, and the main criterion for being awesome is a sports result. It turns out that this still happens in the world of modern sports.
The swimmers’ tournament opened the programme of the Games in Kazan. The incredible beauty of the city, the broad beauty of the Volga River, good-natured and friendly people, a lot of tourists and participants, noisy fans — all this filled the competition with an incredible atmosphere of a great and sincere sports festival. The national team of Belarus arrived at the tournament with the most competitive and full squad, having entered 27 athletes, including juniors. They competed together with the stars, and this gave the Games an additional flavour: one could see and appreciate the full potential of swimming in the participating countries at one time and in one place. Neither Russian nor Belarusian swimmers conducted special training for the tournament. However, their results are very, very impressive even in comparison with those shown by the winners and champions of the World Championships in Budapest: there were golden seconds, and those that allowed to stand on a podium. In general, there are so many swimmers and regions in Russia that it seems that they don’t need anyone else — they can compete with each other without much loss of quality and motivation. But the participation of Belarusians and other athletes harmoniously gave the Friendship Games an impressive international status and made them a truly significant event. Therefore, it would be great if they became traditional.


As thick as thieves

Our team performed excellently in Kazan — Anastasiya Shkurdai and Ilya Shimanovich confirmed their status as first-rate stars, won the 200 metres backstroke and 100 metres breaststroke, won the combined relay, setting a new national record, and also climbed the podium in other disciplines. Alina Zmushko, Anastasia Kuleshova and a whole scattering of young talents perfectly showed their quality, not only fighting on equal terms with high-class competitors, but also outstripping them in a sharp struggle. So there is the potential of the Belarusian swimming, and it pleases. The very fact of the emergence of such competitions as the Friendship Games cannot but reassure. This is not the first, but, perhaps, so far the most visible and noticeable change in the conduct of tournaments by Russia and Belarus with the participation of our representatives. There is no doubt that there will be more competitions. At the same time, we do not forget that next year Belarus will host the CIS Games — and this will certainly be a very, very noticeable event in the international sports calendar, the format of which, as we see, is being transformed and can change beyond recognition. On the sidelines, rumours are increasingly circulating about the non-admission of Russian and Belarusian athletes to the 2024 Olympics (here, however, the question is whether Paris, moaning about a lack of money and big organisational problems, will be able to organise the Games at all), and this will lead to a radical changing the sports landscape around the world. Russian Sports Minister Oleg Matytsin touched upon this topic in Kazan, saying, “We are ready for the development of events in any format. We have enough opportunities and formats — BRICS, SCO, and the CIS — to give athletes the opportunity not to lose the feeling of a competitive environment. Time will tell, but I hope that common sense will prevail, because the development of world sports is impossible as a whole without the participation of Russia and Belarus. Thus, to deprive an athlete of the opportunity to compete at the Olympics is a crime that will lead to even greater discord within the entire Olympic movement.” It would be good for the International Olympic Committee to remember that any crime is invariably followed by punishment.

In Tatarstan, two languages (Russian and Tatar) have parallel circulation and state status, which is not surprising — Tatars, Russians and Chuvashs make up the vast majority of the population of this republic. The region is amazing and picturesque, and its capital, ancient Kazan, which is very important, was not affected by the destructive wave of the Great Patriotic War and managed to preserve all its wonderful historical architectural values. Their roots are in ancient times, and a significant part is directly connected with the reign of Tsar Ivan the Terrible in Russia. Religions, like languages, also go hand in hand — mosques and Orthodox churches live on the principle of good neighbourliness and complement the unique cosy flavour of the city. 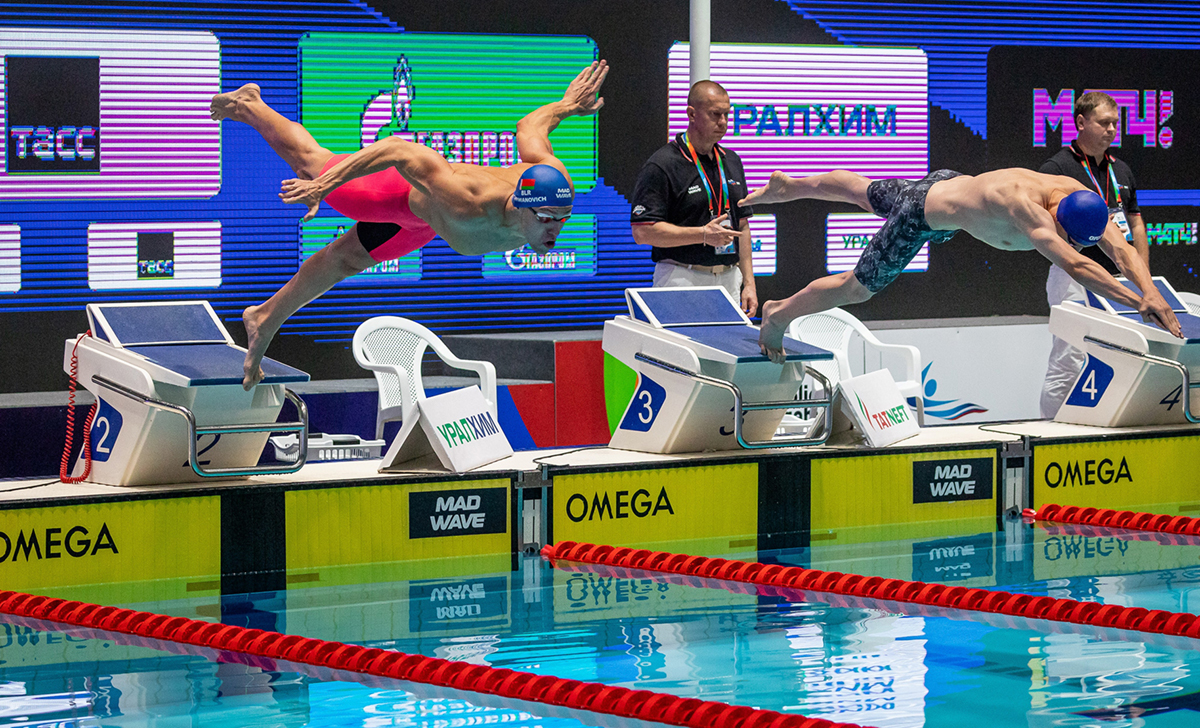 The unspoken status of Kazan as one of the multi-sport capitals of the world is worth noting individually. And these are not empty words. Special attention is paid to professional football, hockey (with puck, ball and grass), volleyball (men’s and women’s) and basketball clubs with a reputation of leaders in Russia. Hockey players of Ak Bars Kazan won the Gagarin Cup three times and thus forced the sweetest joke about renaming the prestigious trophy into the Tatar Cup. Kazan has hosted so many competitions lately: the Candidates Tournament and the European Weightlifting Championships, the Universiade and World Curling Championships, top tournaments in taekwondo, karate, judo and sambo, athletics, badminton, shooting, rowing and rally... And, of course, the FIFA World Cup matches. If desired, the city can hold the Olympics here, because sports facilities are literally situated on top of each other: centres for boxing, table and tennis, gymnastics, badminton... All they are equipped not only for perfect results, professional sports and the pleasure of fans, but also for children, ordinary lovers of a healthy lifestyle.
Kazan is so good that one could not help comparing it with our native Minsk. These cities really turned out to be similar: here they love order and appreciate comfort, people are kind and helpful, walking along the streets, when you feel safe. It is comfortable and good here, these are cities for life, and you really want to live here. So there is no need to be sad about the sanctions — we have alternative directions in sports and tourism. They are not allowed to go to the West, so fly to the East and enjoy new discoveries.