One of the key points of the summer season, the Bard Music and Fishing music and sports festival, having returned after a two-year break due to the pandemic, gathered a record number of guests on the banks of the Chigirinskoye Water Reservoir. Fans and new participants who missed the unique atmosphere of a fun bard gathering came from all over Belarus, from Russia, Lithuania, Estonia, Germany... More than one and a half thousand people gathered at the concert of one of the headliners of the festival, Vyacheslav Malezhik. The return of the Bard Music and Fishing Festival turned out to be truly triumphant. 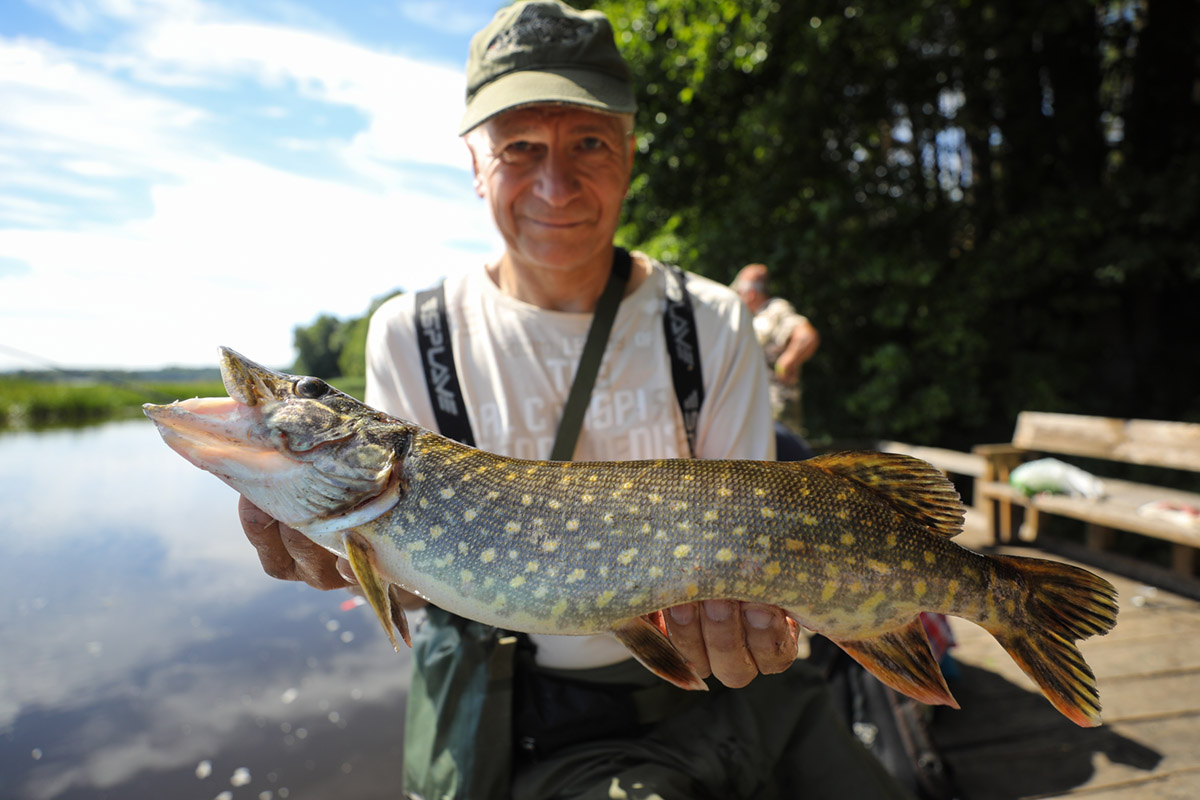 “We have created a unique brand: not just a bard music contest, but the revival of family and corporate tourism,” says Sergey Kulyagin, one of the founders and organisers of the festival. “We earn on entrance tickets to the festive site. This is a fairly effective measure from an economic point of view. However, another important point of this festival is advertising this region. Places at all recreation centres are booked two months in advance.” 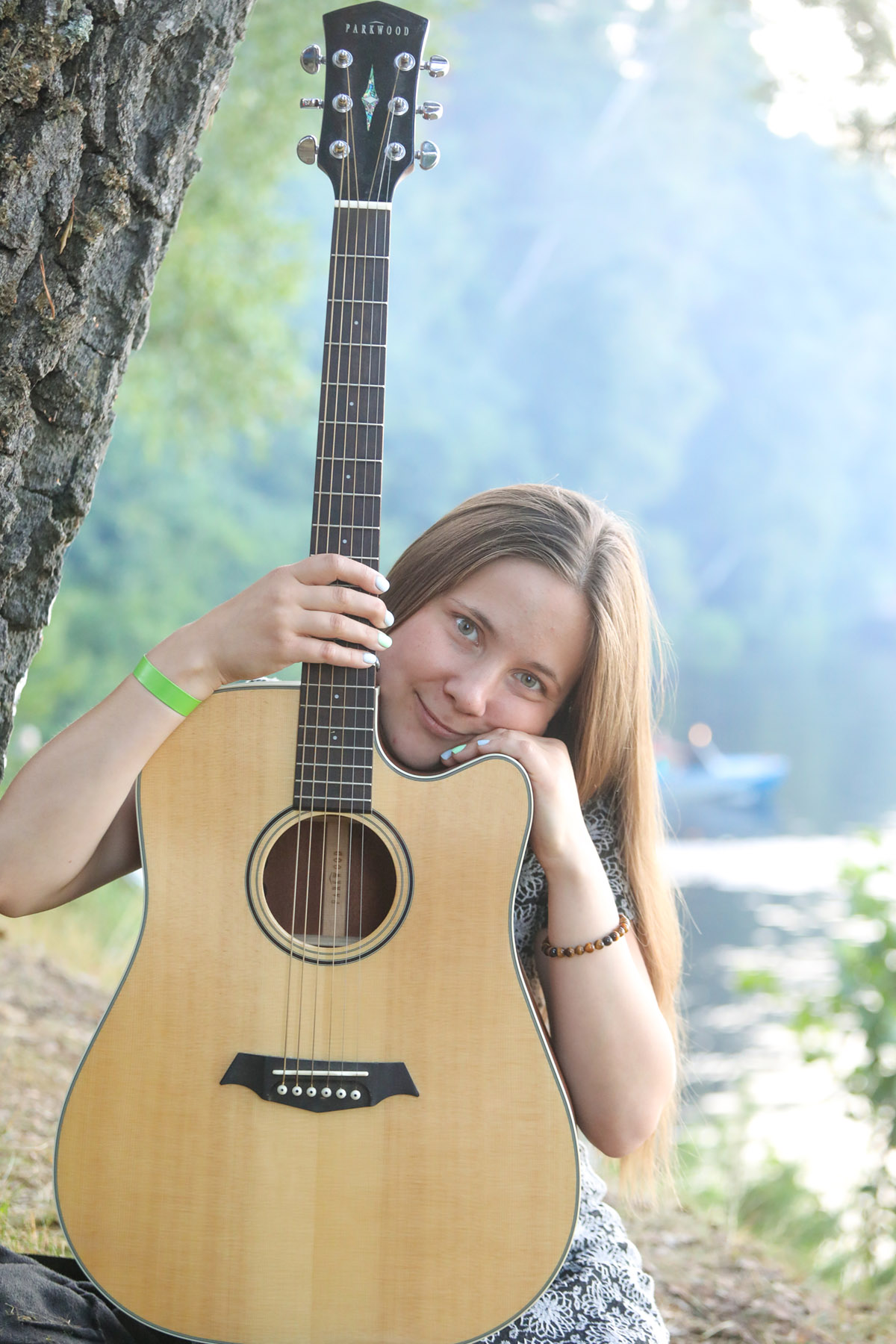 Marina Smolenchuk,
winner of the bard song contest
Sergey himself gave an anniversary concert on the main stage of the festival. The ‘Forest Scene’ in a tent camp right in the forest turned out to be very atmospheric. After all, many guests came to the Bard Music and Fishing Festival with their families. Yekaterina Dubovik is one of the members of the Molodechno bard trio Fiesta. The girls performed at the opening, gave a solo concert, but the scene at the edge of the forest, according to Yekaterina, creates a special atmosphere, “It is so homely, chamber-like. For an artist, the place where there is an audience is important, even if it is a forest glade. With the big stage, you are at a distance from the audience, but here you get a confidential conversation.”
Next door is ‘Bathhouse Meadow’. Who would have thought that hot steam baths would be so popular in summer! Those who wished could attend a master class from aces of hot steam from Belarus, Russia and Lithuania. Professional bathhouse attendant and steamer Gennady Moroz noted, “Bathhouse attendants from farms and agro-farms will present their skills here. There are different types of techniques, massages, a Lithuanian bath attendant shares the secrets of healing herbal tonics after a bath. We do not compete, but exchange experience. People bombard us with questions ‘How to hit the body with a bath besom?’. You don’t have to hit it. ‘What temperature should it be?’. The temperature is not important, the amount of steam is important. There is even a ‘shaman bath’.”
Within the framework of the festival, there was the Chigirinka Fish Soup culinary contest, the Bard and Fishing Queen beauty contest and the fishing contest, which is one of the most popular among guests. 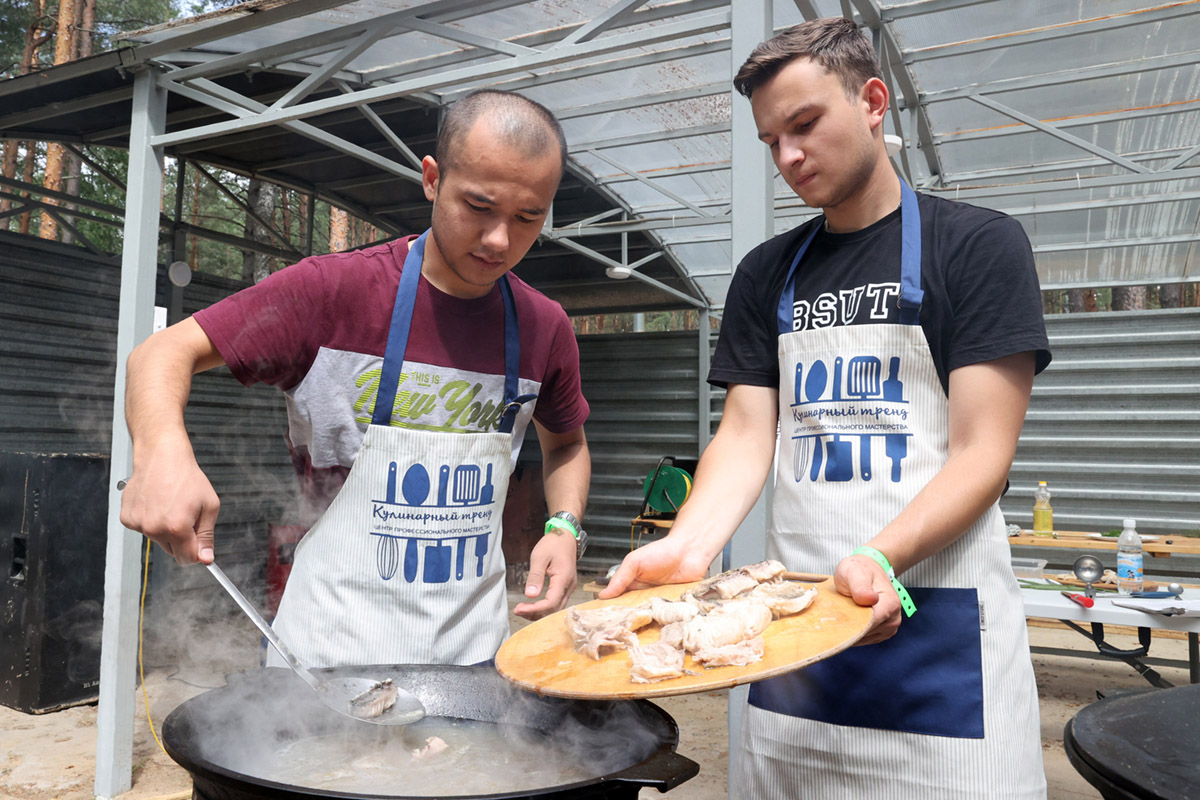 All participants of the fishing contest were placed on the pier under the vigilant control of the judges. The fishermen, who came from all over Belarus, checked the nets to make sure they were empty by the time of the start, and then the catch was weighed and prizes were awarded to the luckiest ones. ‘Goldfish’ went to Andrey Soldatenko with 1 kilogram 385 grams. The victory was brought by a weighty pike! 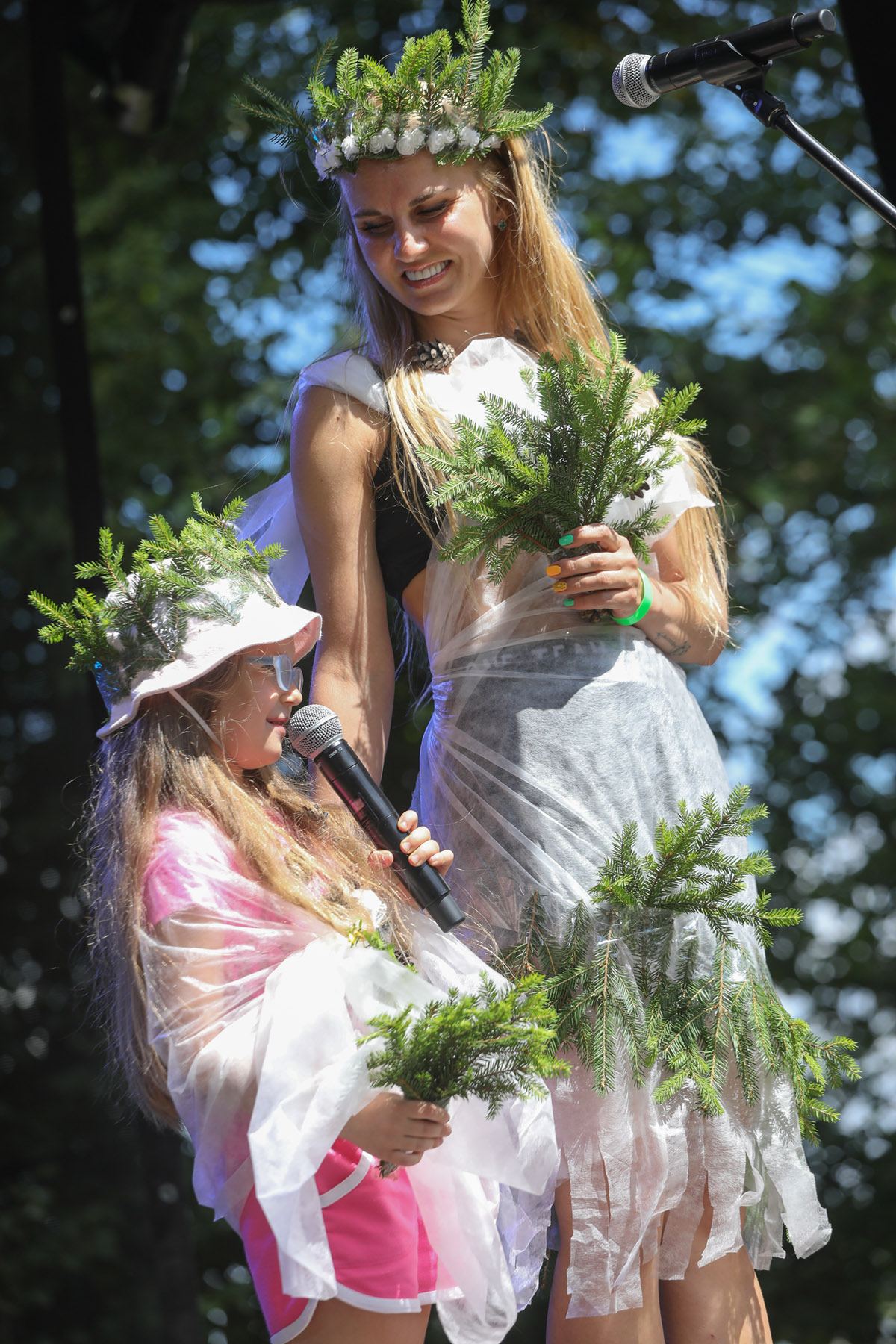 During the Queen of the Bard Music and Fishing beauty contest
But it is not all about the fish. The main intrigue of the festival was who would win the Close Circle contest of bard song and poetry, which was held for two days and gathered about 100 participants. The winner was Marina Smolenchuk from Gomel, who conquered both with her guitar and her gentle voice. The girl will enter the ‘Belarusian Five’ and next year represent our country at the largest festival Siberia Station in Novosibirsk.
The bard song is for all ages, both the elderly and the young came to the Bard Music and Fishing Festival. An impressive delegation arrived from the city of Vyazma in the Smolensk Region: 21 pupils of the Dialogue club of the bard song, which is led by the famous singer-songwriter Lidia Chinaryova. Each and every one with their guitars, courage and the desire to sing. And although the voices are brittle, and the fingers have not yet gained virtuoso skill, the listeners’ welcome for the kids was almost warmer than for the masters.
“The youngest of our pupils is ten years old, the oldest is 17 years old,” said Lidia Chinaryova. “I want the children to take over from us the kindest thing, the classics of the bard song.”
This is not the first time Lidia Chinaryova has visited the Bard Music and Fishing Festival. It is her third time in Belarus, “We really like it here. We are in our element, at ease, in a place where we understand people by a half-word, a half-look, a half-chord, by intonation. Feeling: we are like home! Our children will take away love for Belarus from this festival.”
The guest from Moscow, the poet Mikhail Iverov, one of the leaders of the poetry workshop, was also pleased, “Everything is wonderfully organised, just amazing. It can be seen that a huge preparatory work has been done, everything is clear and without failures. As for the literary component, everything is a little experimental, because bards will be bards, although poetry is also important in their work. But people who just write poetry also came, they were looking for an opportunity to get some kind of commentary, advice, and they found it.”
In addition to old fans, the Bard Music and Fishing Festival attracted many new guests, who can now be safely credited as friends of the festival. 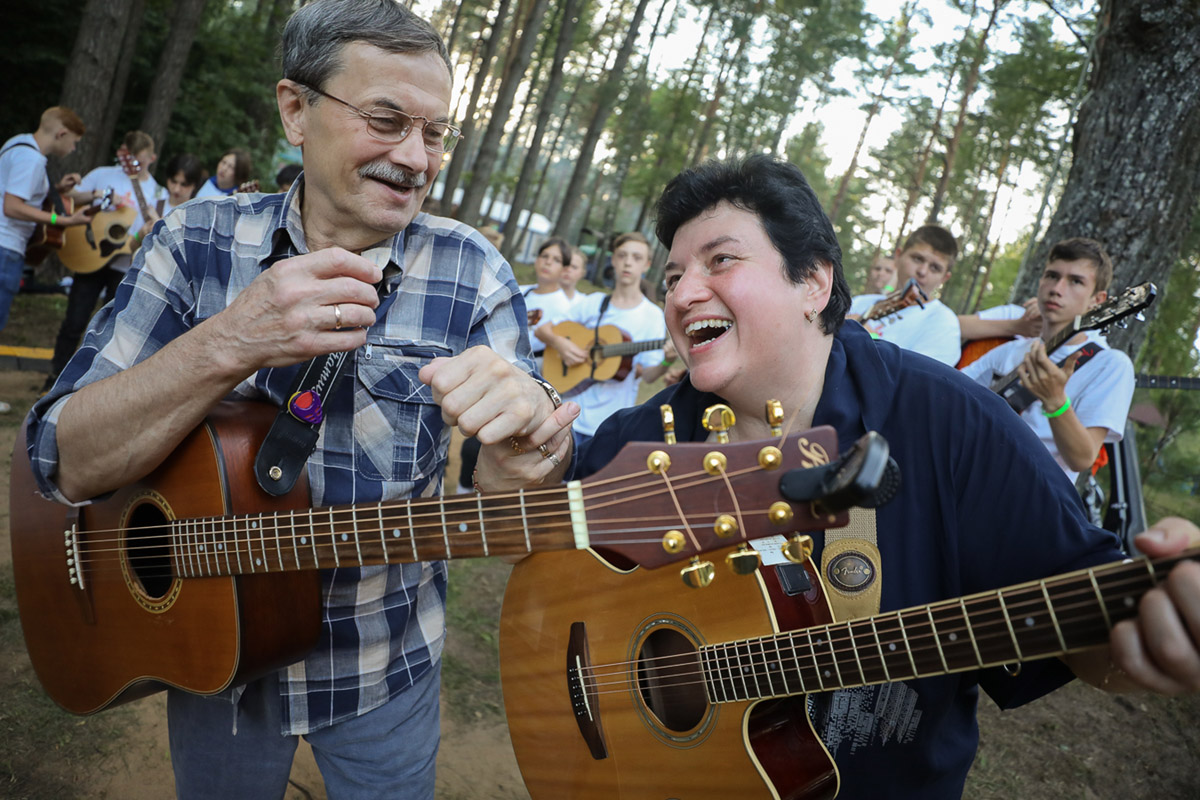 So, the metropolitan entrepreneur Valentina Germanova, despite the already considerable age (an active lady exchanged her seventh decade), went to the festival for the sake of fishing, and suddenly found herself on the jury of a beauty contest, and managed to listen to some music, “Excellent experience! It was a right idea to gather like-minded people to relax together outdoors. I am pleasantly surprised, I liked it very much. I will definitely come back here next year and in all subsequent years!”