The victory of the Soviet people in the Great Patriotic War became an integral part of the Belarusian national idea – as stated by the President of Belarus, Aleksandr Lukashenko, during the wreath-laying ceremony at the Victory Monument on the occasion of the 77th anniversary of the Great Victory 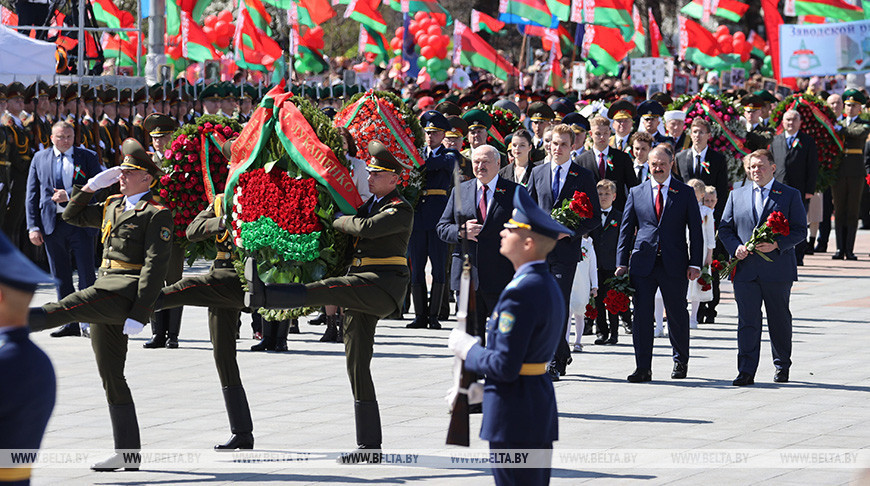 Speaking to the participants of the ceremony, Aleksandr Lukashenko addressed the words of congratulations on the holiday to all veterans, citizens of Belarus and our guests, “Dear veterans! Dear compatriots and guests of Belarus! I wish you happy Great Victory Day. This victory has preserved the Belarusian nation and predetermined the path of development for all generations of Belarusians. It has become an integral part of the common national idea.”

The Head of State noted that on this day at the sacred Eternal Flame, we bow to our veterans, paying tribute to the memory of those who died defending our right to live, “To live freely on our native land and in our state. We remember everyone who held back the enemy to the last bullet on the border and near the Brest Fortress, near Minsk and Mogilev, who was tortured to death in the dungeons of the gestapo, who burned to death in Khatyn, Dalva and Trostenets. We remember everyone, whose blood saturated every inch of our Belarusian land. Grief and death were brought to the world by Hitler’s executioners. Our great common motherland – the Soviet Union – laid millions of lives on the altar of Victory. The past eighty years have not drowned out this pain. Honour and glory to the winners! Eternal glory to the dead!”

Those who gathered on Victory Square honoured the memory of those whose lives were claimed by the Great Patriotic War with a minute of silence.