On visiting the Lida Central District Hospital, the President stated that the situation is getting stabilised and less cases are registered 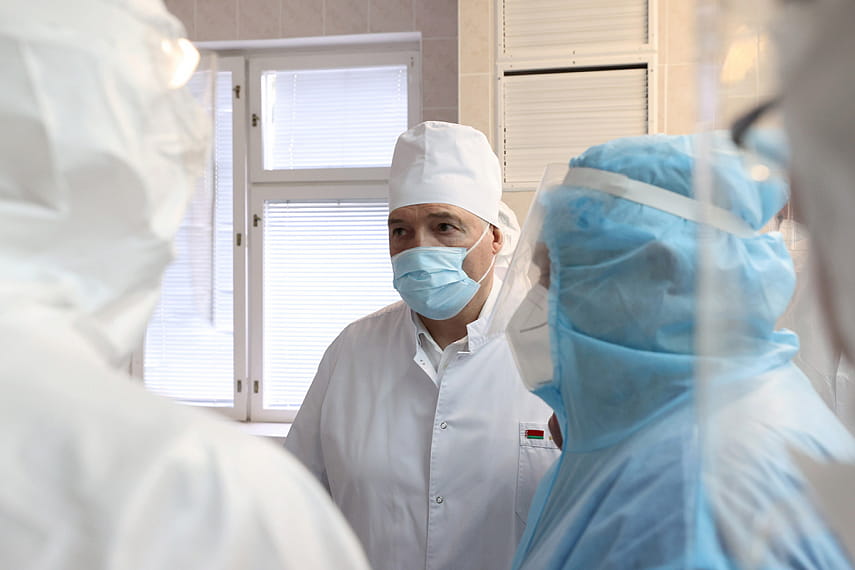 “The situation in the Grodno Region is better than in other areas. However, the trends there are the same – that is, stabilisation and a slight reduction in incidence,” the President said.

In his conversation with the hospital employees, Aleksandr Lukashenko later noted, “The number of cases is falling by 1.5-2 percent daily. As a result, there is a decrease in the incidence rate. We are at a high level but we do not observe the previous growth. The number of hospital admissions of patients with pneumonia remains at the same level.”

The Head of State cited statistics: over the past week, the number of people discharged from hospital rose by 6.4 percent, 44 fewer people are on mechanical ventilators, which is confirmed by a 1.3 percent drop in oxygen consumption compared to last week, while oxygen consumption in the Vitebsk and Gomel regions decreased by 10 and 2 percent, respectively.

Importantly, as the President noted, the specialised healthcare facilities that had previously been repurposed to treat COVID-19 patients are beginning to return to their usual mode of work. For example, in the Brest Region, the gynaecological departments of the regional maternity hospital, several units of the regional cancer centre, the heart surgery department and the department of thoracic and abdominal surgery and transplantation of the regional hospital are gradually returning to their routine tasks.

“Of course, we are not there yet. However, the current situation produces cautious optimism. I’ve been praying God for not a single week for the situation not to get worse. Give it a rest. We are already fed up with this,” the President commented on the COVID-19 situation.

Vladimir Karanik, the Chairman of the Grodno Regional Executive Committee, reported on the epidemiological situation in the region to the Head of State. According to him, the incidence of coronavirus infection has decreased by 6.5 percent over the past two weeks. At the moment, around 35 percent of all hospital beds available are allocated for treatment and rehabilitation of COVID-19 patients. Their repurposing is carried out as needed. Healthcare organisations of the region are fully provided with artificial lung ventilation devices, with 1,725 oxygen points available.

“We registered the maximum incidence during the first wave. At present, the region is far from that level – staying at 80 percent. This is the only region in the country so far. Minsk is at 101 percent level which is slightly more than previously,” Aleksandr Lukashenko said.

The President also spoke about oxygen availability in hospitals. He emphasised that there are attempts to stir up society on this topic: some say that there are allegedly not enough oxygen points for patients in medical institutions. The Head of State commented on the basis of statistics, “Only 52 percent of them are occupied. How is it possible to speak about a lack of oxygen points?”

The situation is approximately the same with artificial lung ventilation devices: in the Grodno Region, half of the available ventilators were allocated for COVID-19 patients. Of this number, only 44 percent are currently used – which is 23 percent of the total number.