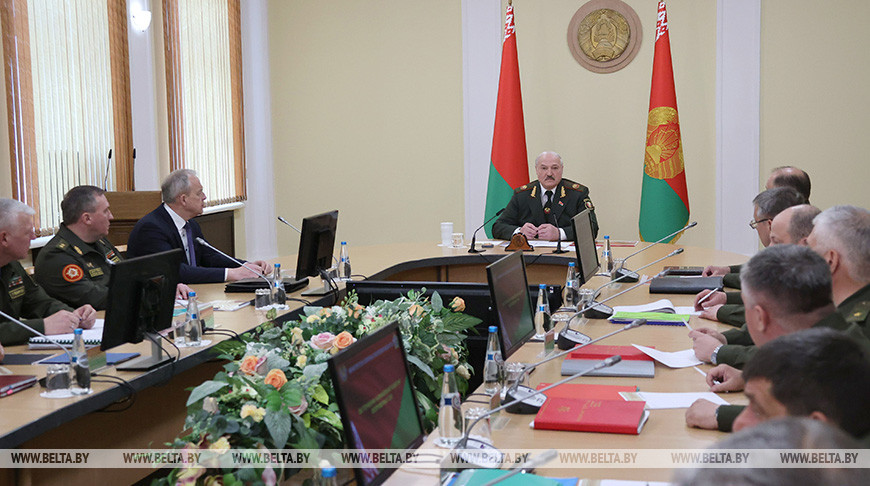 Aleksandr Lukashenko stressed that the events taking place in the neighbouring countries indicate high dynamics of changes in threats to Belarus’ military security, “Views on the use of military force and methods of armed struggle are being transformed. The United States and its satellites continue to pursue a course to aggravate relations with actually the whole world, also increasing their military presence near the borders of Belarus – which is an ally of Russia – and conducting large-scale exercises.”

According to the Head of State, under a defensive cover of these manoeuvres, the issues of troops transfer from America and Western Europe, creation and use of groups are being worked out. “We see the true goals of the events held by NATO. These actually include reconnaissance and development of a possible theatre of military operations in the future. Based on America's plan, Europe and NATO have entered into a global confrontation with Russia. In this struggle, Belarus will have to face an unprecedented and long-lasting economic, political and even military pressure. Moreover, this military pressure will be exerted on us through Poland, Lithuania, Latvia and the North Atlantic Bloc troops stationed there, as well as by maintaining and escalating hostilities in Ukraine. The current situation more than ever requires our troops to be ready at any moment to give an adequate response to military encroachments towards Belarus,” he stressed.

The President emphasised that it is necessary to determine the main directions for further development of our army, “We proceed from the fact that the level of military threats to Belarus will increase in the future, and these measures should be taken as soon as possible. Therefore, on meeting the Defence Ministry’s leadership, I set a task to work out proposals to clarify the directions of development of the Armed Forces in modern conditions.”

The Commander-in-Chief asked those present to report on the results of the work done.