Aleksandr Lukashenko has met with Russian Foreign Minister Sergei Lavrov and discussed the situation on the external contour of Belarus and Russia, noting that Western countries are building up their military forces 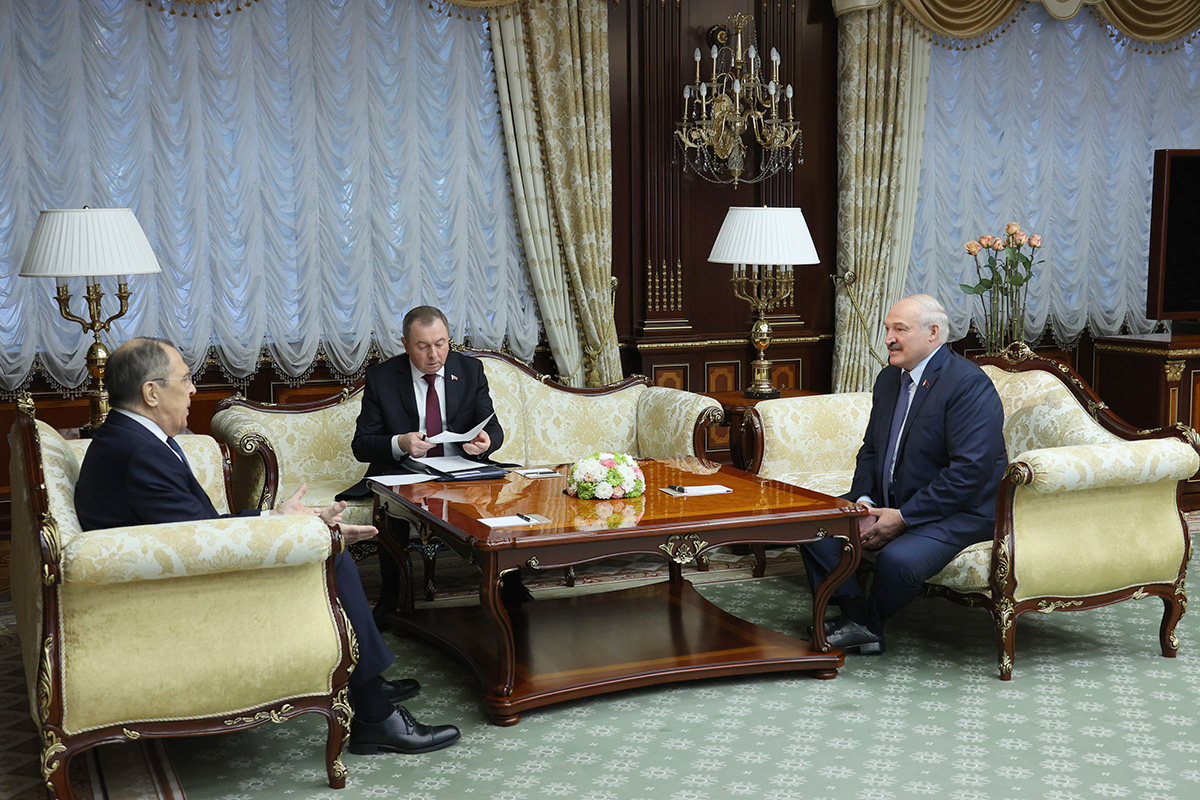 “They are flying and training. Why do they do it? Why do they carry nuclear warheads? In order to put a nuclear bomb on the plane tomorrow and drop it where it needs to be. Therefore, we have not yet responded adequately. Warehouses of nuclear weapons are located in Russia; we do not have them. As Vladimir Putin rightly said, six countries have their nuclear weapons,” said the President of Belarus.

“They have been flying for many years, letting the pilots of non-nuclear countries to control aircraft that are designed for nuclear weapons. We believe this violates the Treaty on the Non-Proliferation [of Nuclear Weapons],” added Mr. Lavrov.

“Absolutely true,” Aleksandr Lukashenko agreed. “But we must be ready. We did not fight in 1941, but we have a good memory of history: when we believed. Therefore, we believe, but we must keep the gunpowder dry across all directions. Moreover, there’s no need to shout that Putin has seized Belarus and is doing here what he wants. We have a well co-ordinated, reasonable policy of the two sovereign states, for which Makei and Lavrov are primarily responsible.”

“Under the leadership of our supreme commanders,” added the diplomat.

“But it’s you who advise us,” Aleksandr Lukashenko agreed with a smile. “Anyway, this does not relieve us of responsibility. We absolutely reasonably understand what is happening around us. It’s better to show them [Western adversaries] what can happen, than it will happen in real life. We don’t need this war.”

“They understand it, Aleksandr Grigoryevich. I think that there are now more and more sober-minded people who are starting to think what will happen next when this situation ends? It’s necessary to think about pan-European co-operation. But I do not know what kind of interaction it can be, it is difficult to imagine in the current conditions. Nevertheless, it is a fact that it is impossible to maintain security in Europe without Russia and Belarus. Many in Europe are beginning to understand this,” Mr. Lavrov shared his vision of the situation.

In this regard, the President of Belarus told his guest what surprised him, particularly, about nationalism, which develops into fascism, “We don’t need it and Europe does not need it either. They cultivate it in Ukraine, they support it. What if tomorrow it spills out in Europe? Europe does not need it, especially Germany. They remember the lessons of history. They must also understand that it will sprout with all its roots throughout Europe.”

Sergei Lavrov gave a fresh example in this regard: a non-governmental organisation was established in Germany to combat Russophobia.

“You understand better than anyone else that they left us no other way. They were offered security on the eve of the operation, and they were suggested to sign agreements at the negotiating table, without any operations, without any war, without any shooting. They didn’t want to. This is their choice,” the Belarusian leader believes.

Sergei Lavrov added that at the NATO summit, documents called Russia the main threat, and China the main challenge, the so-called open door policy was again confirmed, and the 2008 decision taken in Bucharest regarding the prospects for Ukraine and Georgia to join NATO was confirmed.