The number of crimes is decreasing in Belarus, and this is a tendency – as stressed by the Head of State at today’s meeting focusing on law and order issues 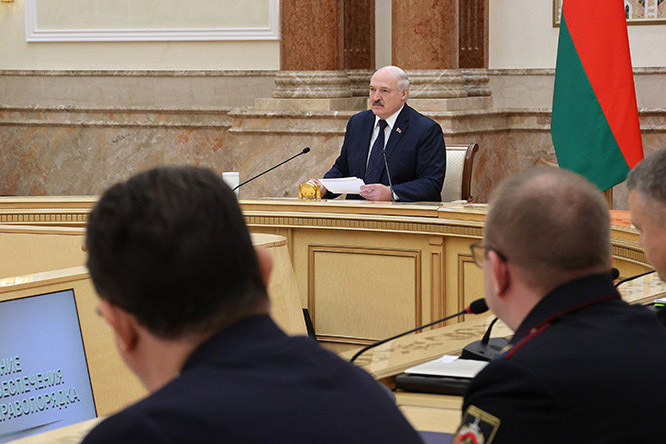 Heads of state governing bodies, chairmen of regional executive committees and the Minsk City Executive Committee, prosecutors of regions and the city of Minsk, heads of regional departments of the Investigative Committee, the Department of Internal Affairs, the Ministry of Emergency Situations have been invited to the Palace of Independence, and – as Aleksandr Lukashenko noted – the topic of today's meeting has been brewing for a long time.

“This is probably the first time we meet with such membership. After the Presidential elections, there has been a rotation among the law enforcement leaders and heads of other state bodies,” the President addressed those present, adding, “The state of law and order envisages not only the level of a criminogenic situation in the country; it is also the observance of laws in all spheres of life of our society.”

According to Aleksandr Lukashenko, if to look at official data of registered crimes, the situation then seems good and has positive trends. “Over ten years, the number of criminal assaults has dropped 1.5-fold and, since 2007, more than halved – to make 87,000 crimes. The crime rate in the country is lower than the average in the CIS countries. The number of citizens who died due to illegal encroachments has significantly decreased: by about 40 percent,” he explained.

At the same time, the Head of State believes the overall positive dynamics is not a reason for complacency. “Last year, there were factors reinforcing negative trends, and I would like to draw your attention to this. At the same time, I consider we need not immediate response measures, not protection of narrow departmental interests in line with the principle of shifting responsibility ‘from a sick head to a healthy one’, not reports for show – but real co-ordinated work of state bodies,” he stressed.

With this in view, as the President noted, not only people in uniform have been invited to the meeting. It is important not only to hear reports of security, defence and law enforcement chiefs but also to pay attention to the shortcomings, take a critical look at the power structures’ work from the outside.

The President stressed that the issue of countering terrorist and extremist threats is still topical, even more than in previous years, “I am interested in how the principle of inevitability of responsibility is ensured, and what measures the Interior Ministry and other state bodies plan to take to uncover and prevent such crimes.”

Aleksandr Lukashenko also added that the issues of ensuring security on the railway, countering cyber-attacks and information confrontation are high on the agenda.