The Head of State, Aleksandr Lukashenko, is to hold a meeting on military security at Belarus’ Defence Ministry today, BelTA reports 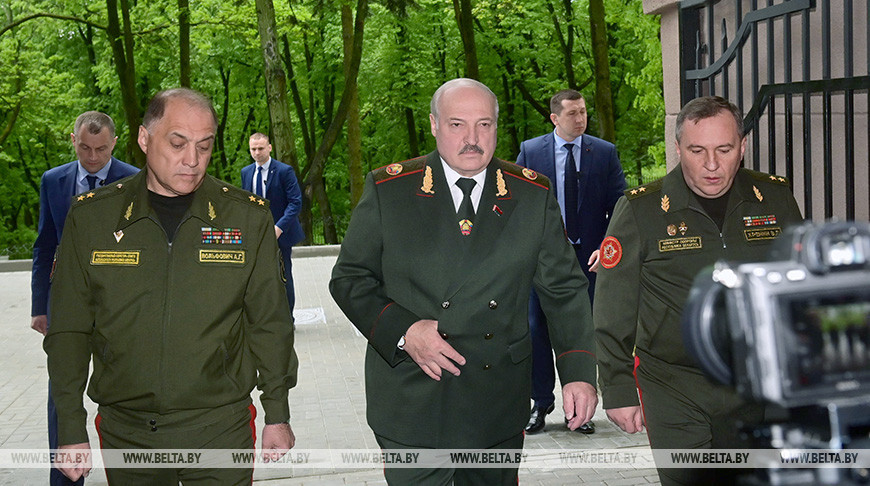 As reported, at a meeting on issues of the state defence order on May 10th, Aleksandr Lukashenko said that Belarus had learned lessons in terms of developing and equipping its troops, including based on the experience of Russia's military operation in Ukraine. Earlier, at the end of November 2021, a relevant issue had been discussed at the Defence Ministry’s Strategic Management Centre. “Openly speaking, we then viewed our army and, primarily, its armament differently. Moreover, to be sincere, Russia's military operation in Ukraine has taught us a great deal,” the President said.

Aleksandr Lukashenko noted that he regularly discusses relevant issues with the Defence Minister and instructed that lessons be learned from the experience of this conflict in terms of equipping and further development of the Belarusian troops, “I constantly demanded from him to observe what is happening around and draw lessons. And as I have been informed, lessons have been learned. When I asked ‘Have the approaches changed from the perspective of today?’, [I was told] ‘Yes, they have changed’. It could not have been any other way.”

The President also stated the need to see and objectively assess the situation in Belarus and abroad from a military point of view – ‘since if we fail to adequately assess the situation and plan our actions, we will not succeed in any collision, in any conflict situation’. In this regard, he mentioned NATO exercises in the neighbouring countries, the constant build-up of the military contingent in close proximity to the Belarusian borders.

Aleksandr Lukashenko emphasised the effectiveness of mobile groups in conditions of modern military operations; these make it possible to quickly move to the right point and strike at the enemy. "The parts should be very mobile, and we need to focus on this. Of course, S-400s, ultramodern aircraft and others are good, but – as you have seen the lesson – large high-tech forces, whether the United States or NATO, have enormous potential able to destroy all kinds of airfields and so on in 1-2 hours. Where will you land your planes then? Moreover, the survivability of these aircraft today is just nothing. Therefore, mobility is of paramount importance,” the President stressed.

The Head of State recalled that, about ten years ago, he convinced Belarus to develop along this path, “And – as it has turned out – we are right. We have benefitted in this regard. The army might be seemingly not large – just 65,000-70,000 people – but it is not small as well. It is very mobile. Suddenness and unexpectedness played an important role in any war, and it is necessary to be mobile to ensure this. This is how we have been building and restructuring our Armed Forces and our army for the third or fourth time."

At the same time, the President stressed that Belarus spares no expense to maintain the defence capability of its army, but each allocated Rouble should be used wisely and thriftily – and this is a very strict requirement.

The most important issues of ensuring Belarus’ military security were also discussed on March 10th, at a meeting with the Defence Ministry’s leadership. "The situation in the region and the forecast of its development clearly show that in the near and medium term, threats to the military security of our country will be at a high level of aggravation," Aleksandr Lukashenko said then.

The Head of State stressed that the country's security requires him and, above all, the leadership of the Defence Ministry to ensure a proper level of combat readiness and combat capability of the Belarusian Armed Forces. "Things will not be quiet,” the President noted.