During his visit to Zhuravlinoe agricultural company in the Pruzhany District, the President of Belarus, Aleksandr Lukashenko, thanked the workers of the agricultural enterprise and rural dwellers for their work 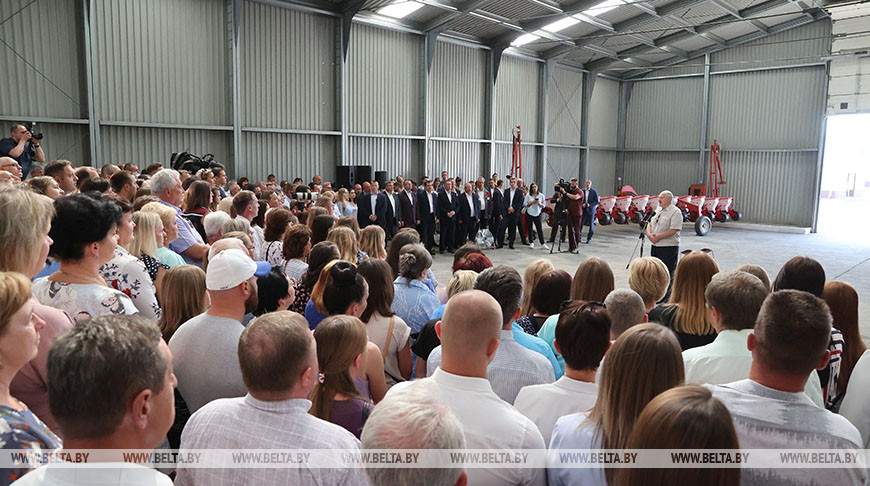 Aleksandr Lukashenko noted that agriculture in Belarus was created at the cost of the efforts of the whole nation. The President recalled that at one time he had initiated a rural revival programme, facilitating the establishment of large commercial agricultural productions countrywide. At the origins of this work then were the former deputy PM Aleksandr Popkov and the ex-chairman of the National Bank Piotr Prokopovich. The creation of new industries required a lot of money and extraordinary measures, but it brought the result. The powerful agricultural complex Aleksandriyskoe was established in the Mogilev Region while the agricultural complex Zhuravlinoe was set up in the Brest Region back then.

“At the cost of the efforts of the entire Belarusian people we created these projects. It was not easy, but our Belarusians survived thanks to their patience and perseverance. Now we see that, thank God, we did so. Otherwise, we would have nothing to feed not only ourselves, our people, but also to sell for export while we get $7bn from this,” said Aleksandr Lukashenko. “This means that agriculture has worked. There was the first five-year plan, then the second plan. Now we are already in the third five-year plan. It is already less noticeable, because we do not need to ‘storm’ anything. We need to work quietly. The main directions have been defined.”

The President also noted that in any case, the peasants need help: they themselves will not build either dairy farms or modern machinery maintenance facilities.

“We will help only those who are trying to work. We can’t do otherwise. But we will not abandon agriculture. We are now deepening, and we need to take a serious look at local roads now. There are two programmes for the whole five-year period. We will restore all local roads. In some places, a lot of work needs to be done. Moreover, reclamation systems that were once built have been launched. Everything must be restored immediately. It’s not easy. We need to restore the technology. We need to produce new equipment: excavators, bulldozers ... It’s a complicated task, but we will allocate money. And you, please, take care of what was created at the expense of the people.”