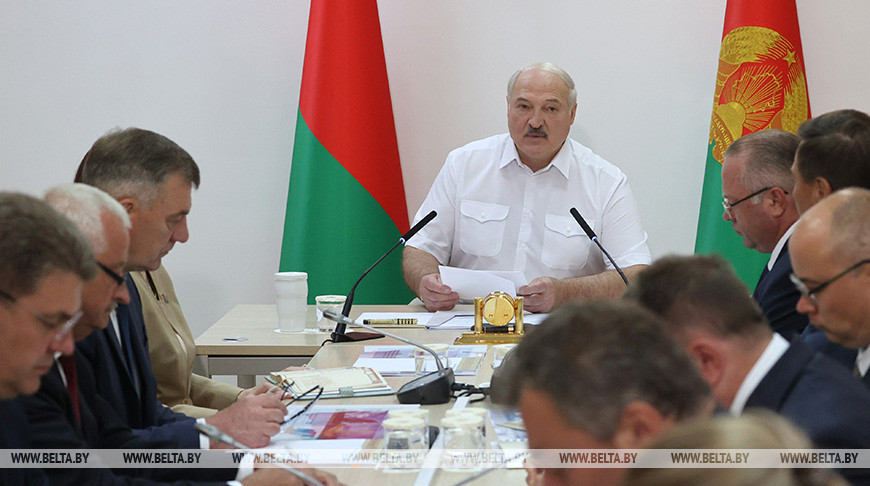 Opening the meeting, the Head of State outlined the main issue on the agenda. It is connected with the development of urban infrastructure in the capital and the construction of new facilities, “Once again, I would like to draw your attention to the fact that we are talking about construction in compliance with all standards and obligations. There is no need to remind you that Minsk is a calling card. Much is being done for the improvement of the capital and for the comfort of people. This is seen by the guests of the capital and Belarus. But how long-term construction projects can fit into this concept of a beautiful cosy city?”

Aleksandr Lukashenko recalled that construction projects, e.g., the former facilities of the Minsk Production Association of Computing Machinery (MPOVT), have not been implemented for years. Only after the intervention of the President the object at the city exit along Pobeditelei Avenue was brought into order. It is not the only such project. The same refers to Gazprom’s long-term construction facility. They cannot put into operation a hotel opposite the Minsk Arena for a long time. The construction of a parking lot and built-in premises in a residential building on Nemanskaya Street has not been completed either. Moreover, the Gulliver shopping centre stands on Kalvariyskaya Street in mute reproach to mismanagement, as does the building near the circus in the most iconic place in Minsk.

“What are these examples talking about? There is more chaos in the capital than anywhere else, Natalya Ivanovna [Kochanova], and it’s not about the lists. There are enough crooks here, but the sluggishness of city officials also has its role to play. You, like no one else, must understand that these are not only monuments of mismanagement. First of all, these are uncreated jobs, lost taxes to the budget, and frozen economic activity. That’s not the way it should be. There is the mayor, the President’s representatives and even the President’s Aide for Minsk. It's time to take drastic measures, starting with Gazprom’s projects and ending with housing construction,” the President said.

The Head of State demanded to report on the situation with the completion of construction of facilities at the site of the former MPOVT plant, the prospects for the development of MotoVeloZavod territories of and how the leadership of Minsk sees a solution to the problems of other long-term construction projects in the capital.