The Louvre, the Hermitage, the galleries of Florence and Vienna... Everyone who knows a little about art dreams by looking at the famous creations of renowned artists and sculptors. But it turns out that the masterpieces of world art can be seen very close: in the Cathedral of the Protection of the Holy Virgin in Baranovichi. Why is it so unique and why is it chosen by tourists from the USA, Germany and Italy? 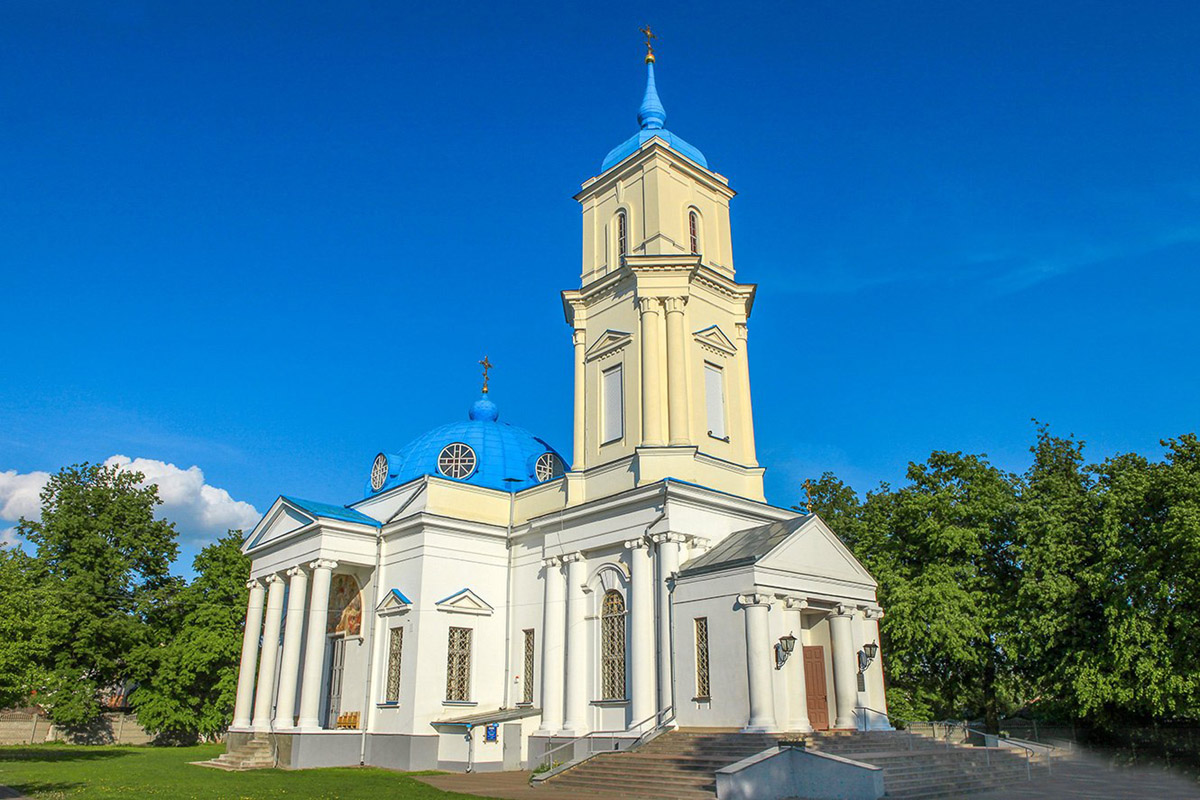 
Secrets of the ruins 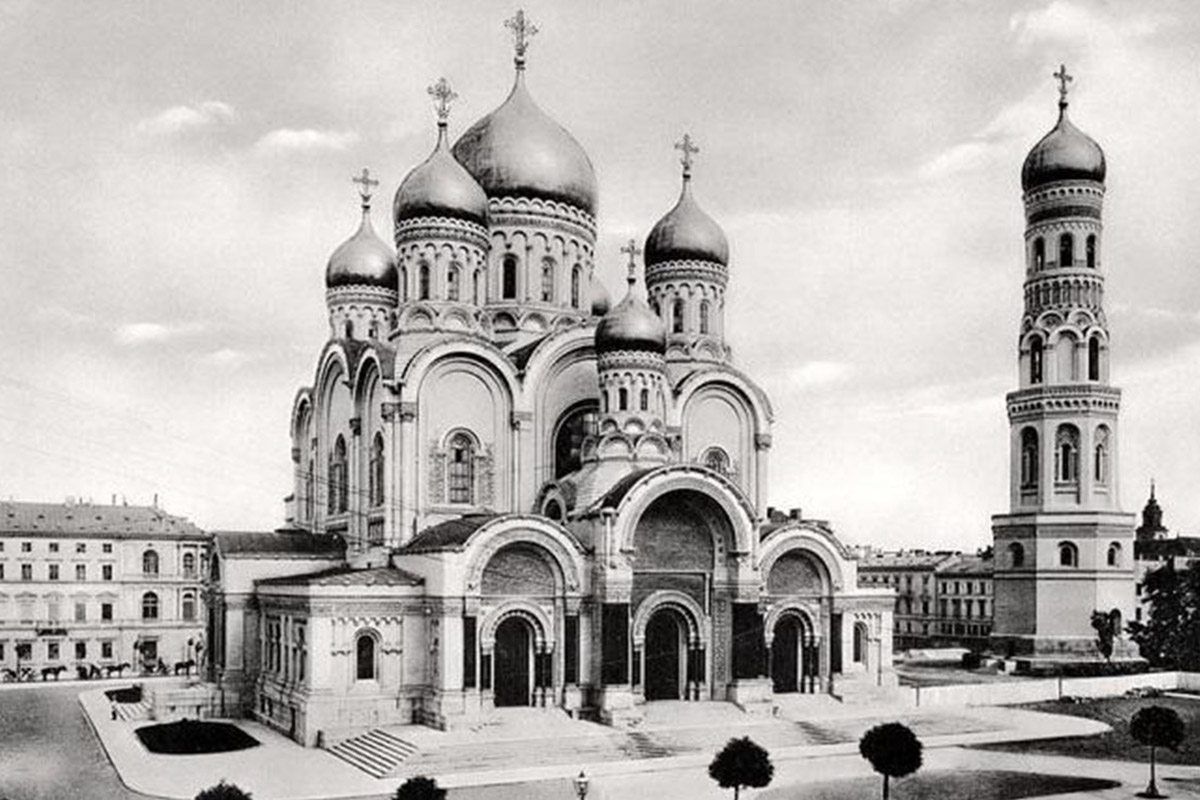 Cathedral of St. Alexander Nevsky in Warsaw
“Everything was a little different,” protodeacon Andrei Gorbunov tells us. “This story began in 1893 in Warsaw. The then Governor-General Iosif Gurko appealed to Emperor Alexander III with a request to approve the construction of a temple in the city. There were many Orthodox Christians among the inhabitants of Warsaw, so the emperor not only agreed, but also set an important task: this church should testify to the greatness of the Russian state and faith while also being a sermon for Catholics, so that they can immerse themselves in the history of Orthodoxy. It was decided to build the temple on Saxon Square, and a competition for the best project was held among the architects. It was won by the master of the Imperial Court, Leonty Benois.”
The construction of the cathedral in honour of St. Alexander Nevsky began in 1894 and lasted for six long years. It was a truly grandiose temple: the height of the bell tower reached 70 metres (the size of a modern 20-storey building).
While the construction was going on, famous artists arrived in Warsaw who were engaged in the decoration of the temple. Viktor Vasnetsov was in charge of creative works while Aleksandr Frolov looked after the creation of the mosaics. By that time, he had brought from Venice a unique reverse set technology, which significantly reduced the cost of work. The cathedral turned out to be grandiose and very expensive: gems, marble and granite were not spared for its decoration. According to various estimates, the construction cost 2.5 tonnes of gold (if you transfer this into modern money, you get about $100m).

The heart of the cathedral, even years later, is considered to be mosaics: masterpieces of world art which were created by Viktor Vasnetsov, Nikolai Koshelev, Nikolai Bruni and Viktor Dumitrashko. The most impressive in terms of size was the mosaic ‘All of Creation Rejoices in You, O Full of Grace’. It was located in the altar of the temple and its area was more than a thousand square metres. This work is also unique because the image of the Virgin on it is considered perfect.

Vasnetsov searched for it for a long time. He studied and analysed all kinds of faces of the Mother of God, trying to create the same one. And, we must say, he did it, as many art critics attest. The Mother of God has an unusual face with large eyes and a heartfelt gaze. Later this image became almost canonical and the artist was nicknamed the creator of the Russian Madonnas.
The cathedral has preserved about twenty mosaics. According to art critics, 10,000 items represent world-class artistic value. Today we could have admired them in the rich expositions of museums, but this was not destined to happen. Everything that demonstrated the same greatness of power and faith was razed to the ground. 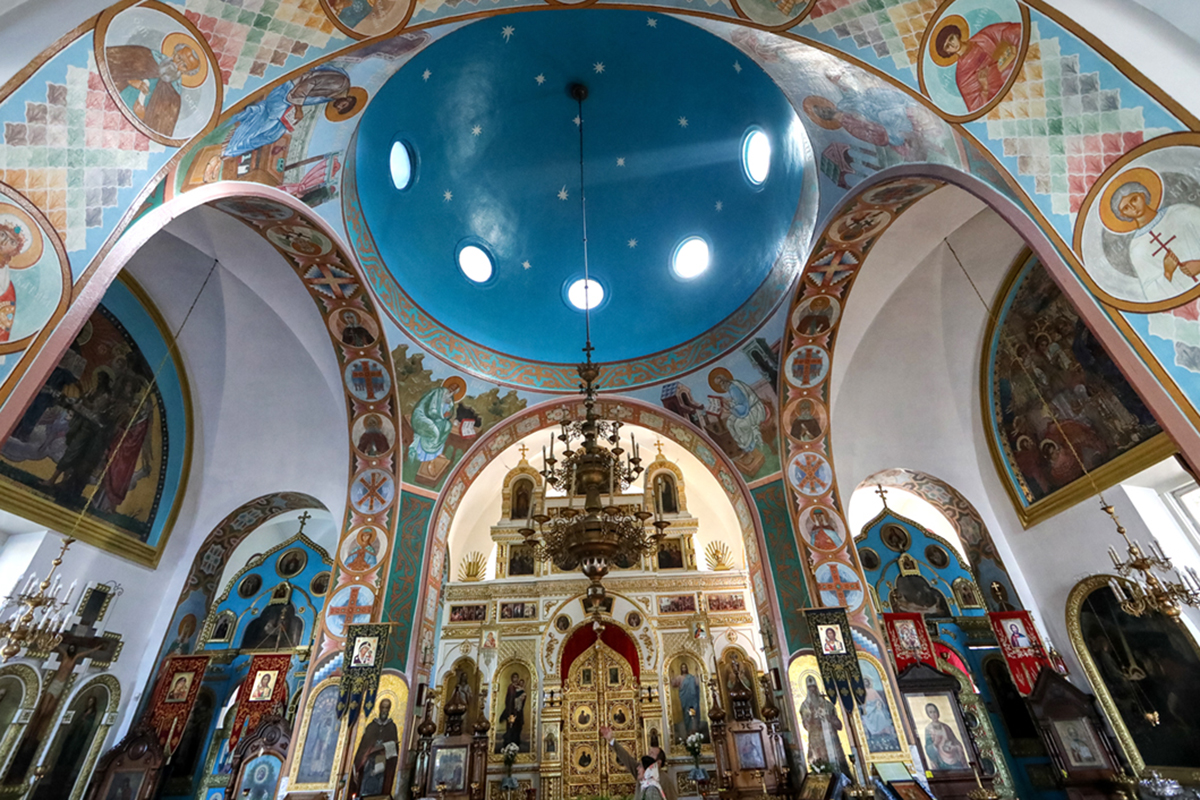 The vault of the Holy Protection Cathedral
PHOTO BY ALEKSEY VYAZMITINOV

The inevitability of being

‘These vile Byzantine domes have no place in the centre of Warsaw’, the Polish government thought in 1918. The hatred of Russian culture was so strong that the fate of the cathedral turned out to be fatal. The Warsaw magistrate even issued bonds for destruction — so that every Pole could become involved in the ‘great’ mission. People contributed cash, and in return they took bricks and other materials for this amount, thus destroying the temple. The cathedral was destroyed over two years, by summer 1926, not a trace remained of the Christian shrine.

By the grace of God, something was saved, with Orthodox believers in Poland taking doors, icons and mosaics. They were literally ripped off the walls in pieces, just not to be torn to pieces. But how did some of these masterpieces end up in Baranovichi?
“In 1908, there was a wooden church on this site,” says Father Andrei, leading us on a tour. “But in 1921 the church burned down. In the years when Baranovichi was part of Poland, churches were erected only on the territory of Belarus while in Warsaw, on the contrary, they were destroyed and closed. Therefore, the Metropolitan of the Polish Orthodox Church, Dionysius, decided to transfer part of the mosaics to the cathedral under construction and the first gifts came to us in 1926.”

Near the side entrance to the Holy Protection Church, you can see in detail the panel by Nikolai Koshelev ‘Saviour with a Donator’ — it is placed on the facade under the roof itself. Its small-coloured pieces of glass shimmer in the sun. The mosaic tells a story: it depicts the architect Leonty Benois, who presents to Christ a model of the majestic Alexander Nevsky Cathedral. The Saviour gives the benefactor (donor) a golden crown because he did not hide his talent but used it for the good of people.
On the north side of the temple there is a mosaic Cathedral of the Archangel Michael, designed by Nikolai Bruni, depicting Christ in adolescence and angels. Fragments of the panel have been collected together.
These mosaics were made using the Venetian method: the reverse set method. The craftsmen had over 20,000 shades of smalt, which is why the colours of the mosaics are so vibrant.

Five more unique mosaics are kept inside the church. The protodeacon opens the gates of the altar so that at least from afar we can see the very work based on Vasnetsov’s sketch, which in the last century crowned Alexander Nevsky Cathedral. A host of angels and saints, images of churches: much of this panel will never again appear before the eyes of the Orthodox. But the central faces of the Mother of God and the Child have survived and now rise above the worshipers in the cathedral, as if blessing them.

On the sides of the altar, in the columns, there are two mosaics based on Viktor Dumitrashko’s sketches: Saint Alexis of Moscow and Saint Joseph of Volotsk. They were made in memory of Iosif Gurko, who initiated the construction of the Warsaw church. The vestments of St. Alexis are a separate work of art: it is woven from biblical subjects.
And under the vaults of the temple, two more mosaics were placed: The Mother of God with Angelic Ranks according to a sketch by Nikolai Bruni (it was assembled from nine fragments) and Deesis with Bystanders by Nikolai Koshelev.
The Rector of the temple, Father Aleksandr Dzichkovsky, has been serving here for several decades. He sadly admits that many parishioners do not even know about unique images they pray with. But the priests try to conduct excursions for people, they never refuse to give interviews to the press and do their best to preserve history.
The masters of the Silver Age have much to surprise us with.