The Chairperson of the Council of the Republic, Natalya Kochanova, had a rich programme of participation in the 3rd Eurasian Women's Forum in St. Petersburg – meeting the Chairperson of the Federation Council of the Federal Assembly of Russia – Valentina Matviyenko, the Vice President of the Parliamentary Assembly of the Organisation for Security and Co-operation in Europe (OSCE) – Pia Kauma, and also delivering a speech on a global mission of women in the new reality 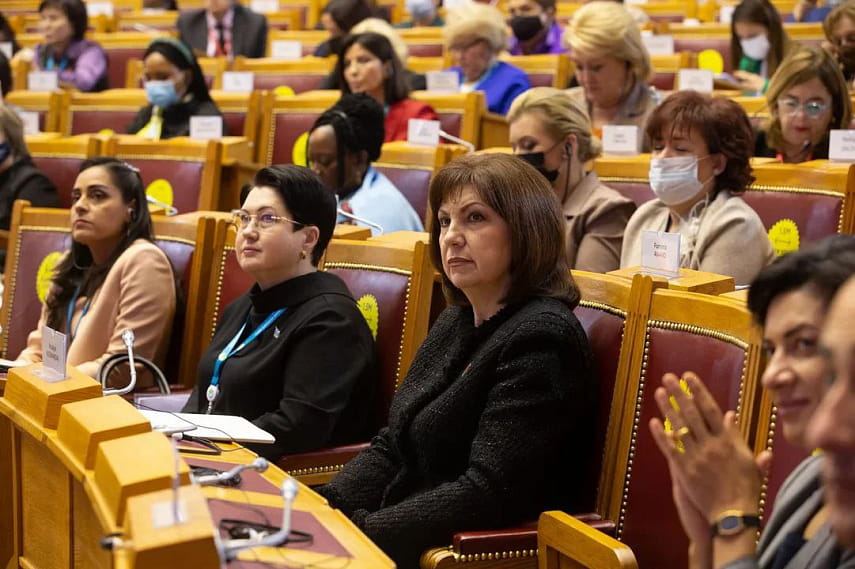 “I’m convinced that the global mission of women is to prevent conflicts, reconcile countries and peoples – guiding them along the path of creation and development. Our heavenly intercessor – Saint Euphrosyne of Polotsk – is the ideal of a woman for me. Thanks to her active peace-making and educational activities, Euphrosyne is revered by Orthodox, Catholic, Uniate believers. Our modern world needs such women – diplomats and peace-makers – more than ever. Having gathered at the forum, we become involved in this great mission,” Ms. Kochanova addressed those present.

People need to jointly resist lies, falsehoods and fakes, while protecting our youth from harmful informational influence. That was the key message of Ms. Kochanova’s speech. She emphasised, “We must bring the truth to the world. Our strength lies in live human communication. When united, women of goodwill can do a lot. Together, wherever we are and whatever we are involved in (politics, public initiatives or household management), we must stand up for peace, security, and confidence in the future. The future of humanity depends on us, women.”

The Chairperson of the Council of the Republic also mentioned the events of 2020 – the year which became a true test for Belarusians. Ms. Kochanova reminded that a large-scale and intense hybrid war has been launched against our country, and some of our compatriots are involved in political games. She stressed, “Some women are the outright disappointment and deep shame of the Belarusian nation. Contrary to the nature of a Belarusian woman – to be the guardian of family well-being, a source of creative inspiration and spirituality, a symbol of mercy and harmony – they were the first to take to the streets and are now hanging around in other people's homes. By begging for grants and calling for sanctions, they are selling the well-being of people in our country. We, Belarusians, cannot accept this... Representatives of the Belarusian people – members of the Council of the Republic, deputies, labour teams, trade unions and public associations – have called on the world community to leave Belarus alone and not interfere with us to build our own destiny. We are always ready for an open and honest dialogue with everyone.”