Paralympic athlete Uladzislau Kandratau talks about his sports dream, the support of his family and overcoming himself

18-year-old Uladzislau Kandratau, pupil of the Mogilev Regional Specialised Children and Youth Sports School of the Olympic Reserve of Trade Unions Spartak, has six training sessions a week. The wheelchair did not become a barrier for him. Uladzislau is sure that being an athlete is a state of mind — you need to fight to the end and perceive any life problem as a new bar. 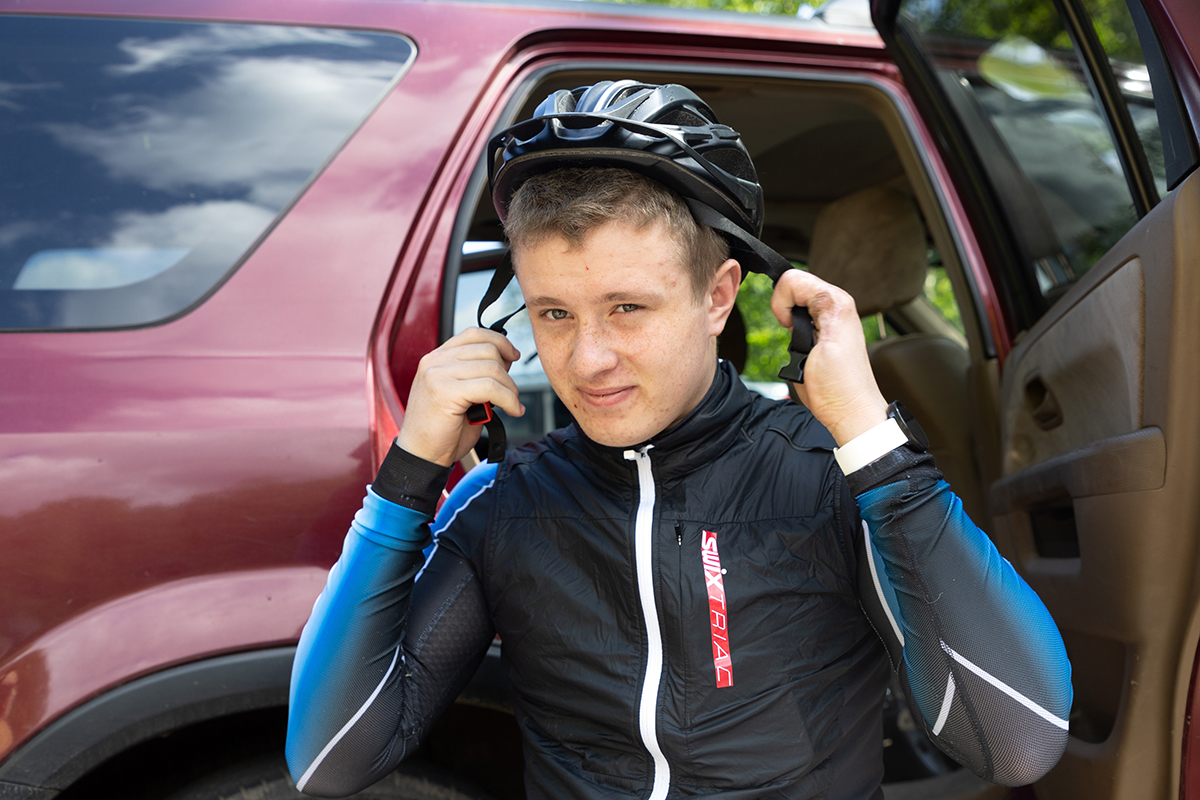 The height difference on the roller-ski track near Mogilev is up to 80 metres, the athletes rush like bullets. The tips of the poles are sharpened for good grip on the asphalt, a helmet is an integral element of the equipment. Uladzislau Kandratau is not inferior in speed to other athletes, the only thing is he does not stand on roller skis but sits on a sled. The first sled was welded by Uladzislau’s support team: in summer, the skids are replaced by rollers. These are already the third ones — the workload is growing, and Uladzislau himself. The training arsenal of the special athlete includes a skateboard, a gym and a swimming pool. The guy has steel muscles: without legs on hands alone he does 50 push-ups.
The training lasts more than two hours. The load is under the strict control of Vasily Gavrukovich, Uladzislau’s coach. Readings from the athlete’s heart rate monitor are transmitted online to his phone. Today, Uladzislau calmly tells the story of three years ago as a result of which he ended up in a wheelchair, “At that time, I completed the first course of the professional lyceum. I studied to be a mechanic, like my father and brother. On an August day, on the eve of my birthday, I got on an old scooter which I had repaired myself and drove off. I could not stop in front of the train — the brakes failed. I was taken to the hospital... After that, I returned to school, graduated from it and entered the Mogilev Economic Vocational and Technical College as a PC operator. I have always loved sports. I went in for football and swimming, ran marathons, played hockey with my peers at our ice palace and was a forward in the adult team.” 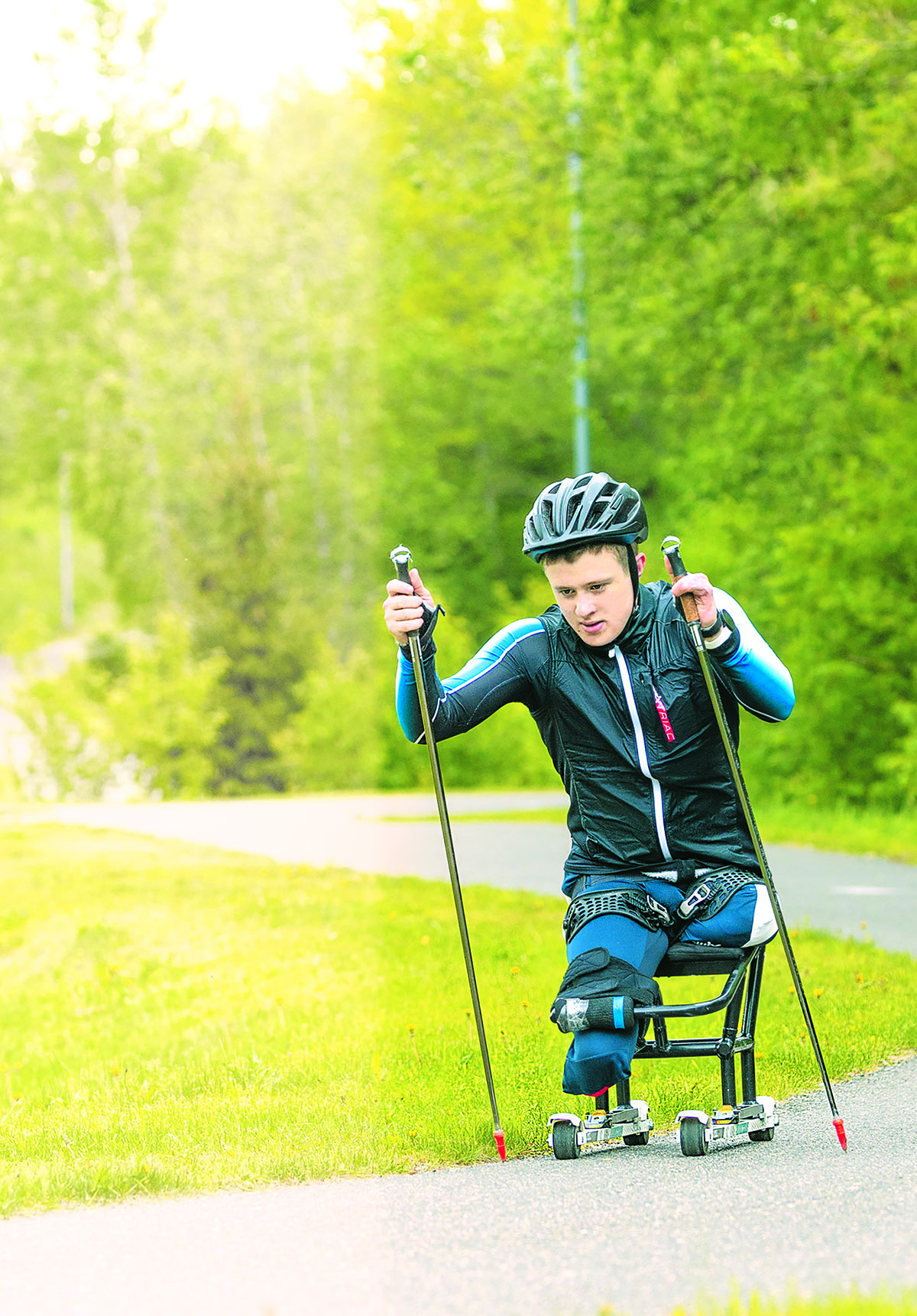 In life, things can go not according to plan, but this is not a reason to give up on your dreams and lower the bar, Uladzislau is sure. He won a license for the 2022 Paralympic Games, but, as we know, Belarusian and Russian athletes were excluded from participation. Ulad zislau comments on the missed opportunities, “I was hardly ready for prizes, but experience was important to me. I do not have a sparring partner, meanwhile, it is very stimulating when there is a stronger opponent to look up to. I took silver at the national championship. I received the title of Master of Sports. I took three fourth places at the world championship in winter sports in Norway this year. I perform in a number of disciplines: sprint (800 metres distance), 5, 10 and 18 kilometres, and also biathlon. Thanks to sport, I have got a friend — Aleksandr Davidovich, a two-time bronze medallist of the Paralympic Games. He plays for the Russian national team. He comes from Shklov. Aleksandr is going to come home this summer, he will bring a professional bike for training, and he promised to give me a master class.”
Uladzislau met his ski coach via his physical education teacher who decided that sports were the best rehabilitation for the guy. By that time, at the Mogilev Regional Specialised Children and Youth Sports School of the Olympic Reserve of Trade Unions Spartak, there was already a sports department for people with disability. Honoured coach Vasily Gavrukovich constantly came from Mogilev to train children from the Shklov Boarding School for children with visual impairments. Even totally blind children were trained. Vasily Gavrukovich recalls that the whole family of Uladzislau supported him, “His father and older brother even brought Uladzislau to training at first. Now he gets on a regular bus and comes from Shklov to Mogilev. There are 17 athletes with musculoskeletal disorders and visual impairment at our sports department for people with disability. There are many examples of how training helped children improve their health, increase self-esteem and socialise. However, there is a problem: many parents are not ready for the fact that their child will be outside the greenhouse conditions. Therefore, most often we go to them, not they to us.”
Once Vasily Gavrukovich coached Yadviga Skorobogataya who became the champion of the 2002 Winter Paralympic Games, and in 2018, a cross-country skiing department for people with disability was opened at the Specialised Children and Youth Sports School of the Olympic Reserve — the only one in the country. The same is planned for the archery department. By the way, for the last four years in a row, the school has become the winner of the Republican Spartakiad.
Uladzislau has no time for rest this summer. He is looking forward to the training camp of the paralympic team in Raubichi. Recently, he succeeded in handling new prostheses — now he can walk around the house with no cane. To become more mobile, Uladzislau plans to get a driver’s license. The athlete calls his family the most important value in life. He is ready to do everything to make his family proud of him, “My parents, brother and sister support me very much. I want to win gold at the Paralympic Games. I invest in this victory every day. Four years of training for one chance. My strong suit is patience. When I ran marathons, it happened that I had no more strength but I did not give up to the end and won through willpower. And now I want to prove to everyone that I can! And above all, to prove it to myself.”