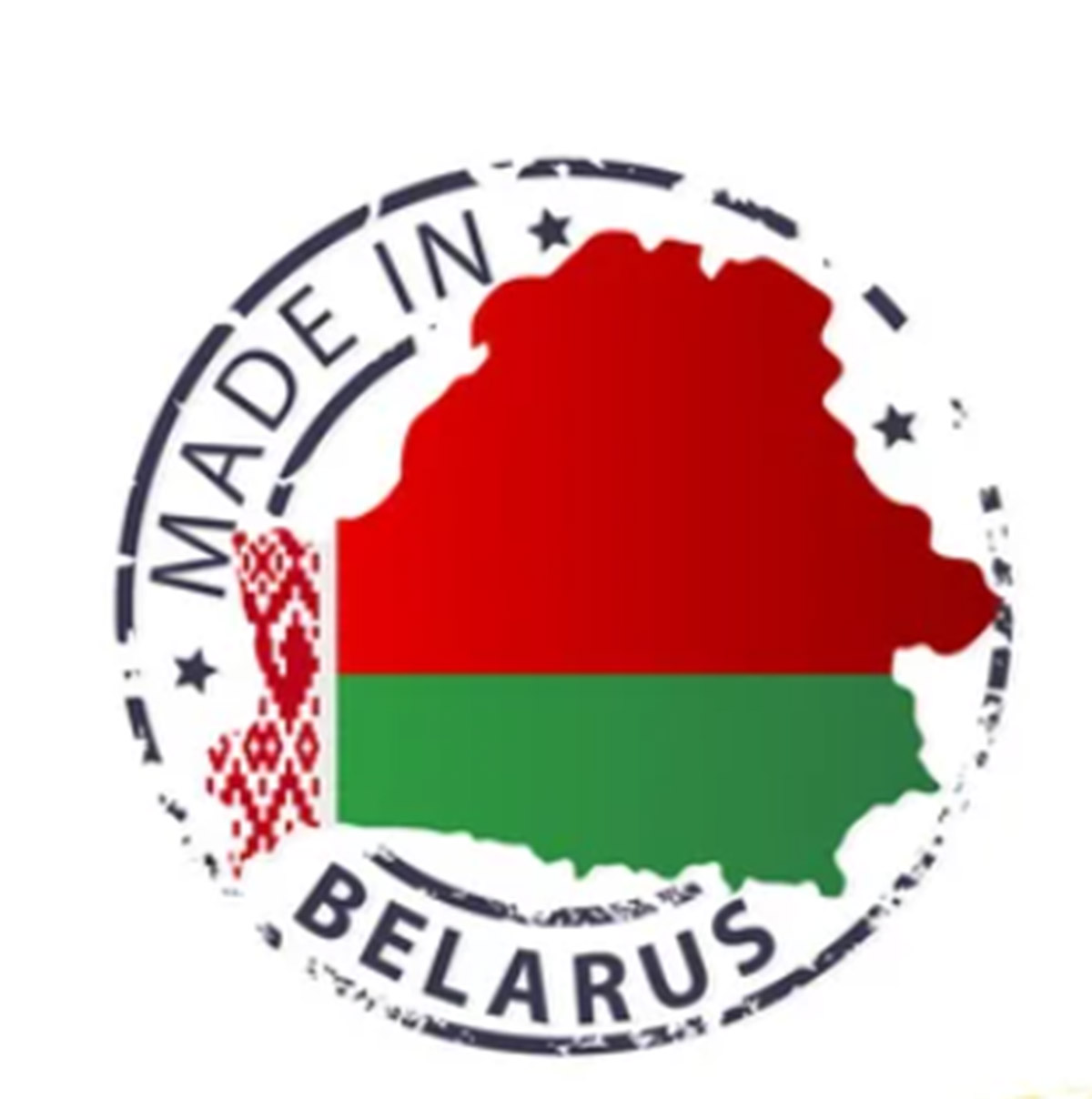 The most curious spots for industrial tourism in Belarus

Today, people want to know more about the things that surround them, such as by whom and how appliances, dishes, clothes, food are created. Therefore, many factories not only opened checkpoints for tourists, but also offer to participate in the creative process. The advantages in this are obvious in terms of additional income from services and promotion of the company. Meanwhile, for young people, this is a chance to see the working conditions at the enterprise and try on a profession.


Minsk Tractor Works: a city within a city
The cost of the tour is 6 rubles (a little more than $2.3) for a child and 12 rubles (about $4.7) for an adult.
This is the first Minsk enterprise that dared to open a checkpoint for tourists. In 2021 alone, more than 20,000 of them visited here.
What are their impressions? They say that the Minsk Tractor Works is a city within a city with its avenues, alleys, the hum of machinery and busy traffic. And this is not surprising because 16,000 people work at the Minsk Tractor Works, and its territory is 150 hectares.
One-and-a-half-hour tour is one of the most popular tourist services. It has several viewpoints. In the mechanical workshop, the guests watch how the units of the future BELARUS tractor are assembled from gears and shafts. After that, they can watch how a tractor is born from these assemblies on a moving conveyor in the assembly workshop. By the way, in an hour and a half of the tour, the workers manage to assemble nine pieces of equipment. For a surcharge, those who wish are offered to try on the role of a worker and install an exhaust pipe or a steering wheel. Then they are given a certificate signed by the director, which indicates what model of tractor was assembled and who assembled it.
You can sit in the cabin of the finished BELARUS at the exhibition of equipment samples. Among the tourists there are many who wish to ride a couple of kilometres on a tractor with a capacity of 350 horsepower across the territory of the enterprise. Unfortunately, only in the passenger seat. 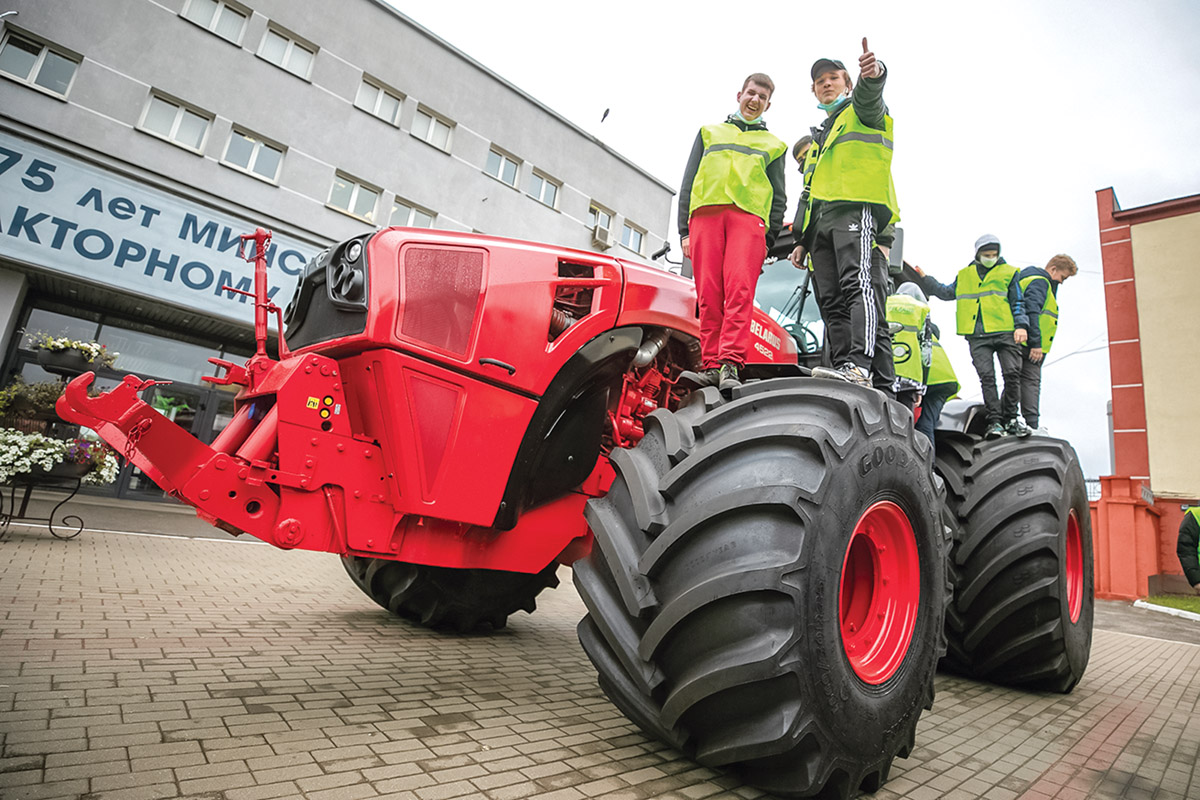 
In addition, the Minsk Tractor Works has its own museum. What’s interesting about it? Did you know that the plant has two stars of its own in the galaxy? One is in the Ursa Major, the second is near the Lyra constellation. These are all gifts from a foreign partner for the anniversaries of the Minsk Tractor Works. Certificates and a star map with the location of shining gifts are far from the only pride of the museum, so you won’t get bored there either.


Orsha Flax Mill: a man-made miracleTours are free, pre-registration is required.
The company started in 1930 with a small flax factory.
Today, five factories with state-of-the-art equipment operate on 43 hectares. Linen yarns, fabrics and finished products from Orsha are well-known in 43 countries of the world. 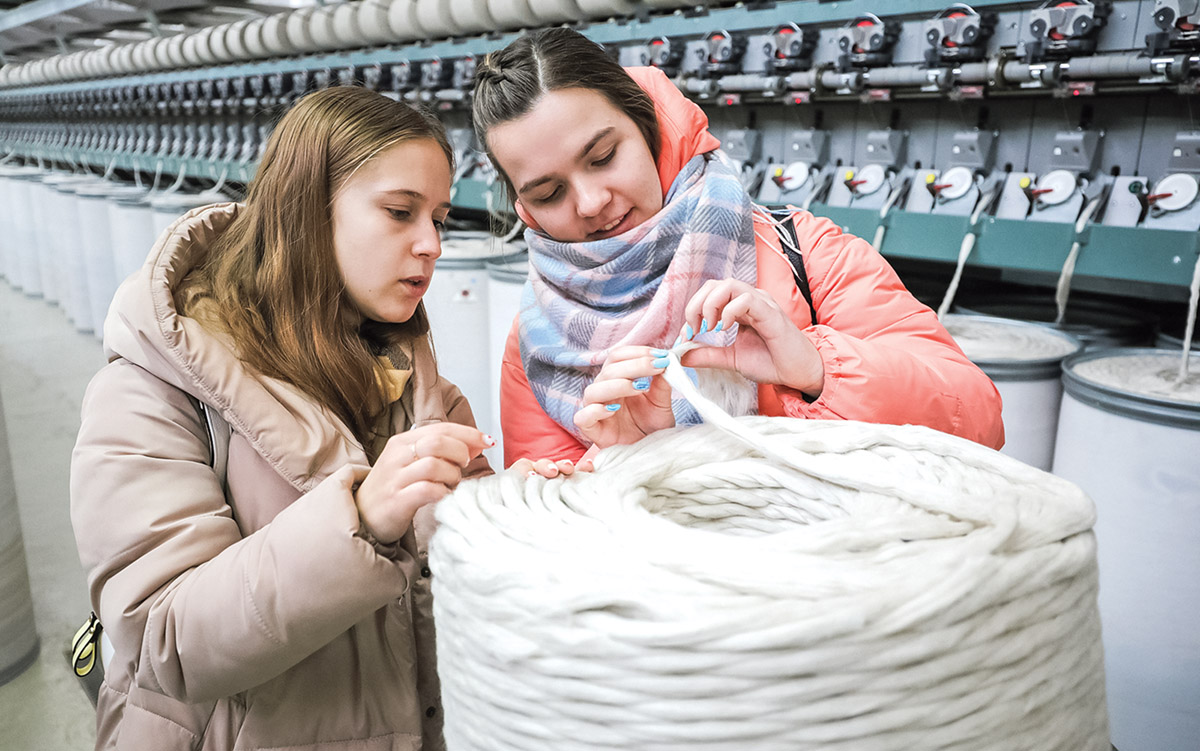 
Although flax has long been a brand of Belarus, the main industrial linen giant opened its doors just three years ago. Three tour routes have been developed here at once. One is for the business community. Recently, the Ambassador of Pakistan and 26 military attachés with their wives got acquainted with the linen production in Orsha. The second route is for high school students who plan to enter specialised educational institutions. The third programme, which is Orsha Region, the Cradle of Belarusian Flax, is designed for a wide audience. The route goes through different shops. The guest can see the entire technological process from combing the fibre and processing it into a roving, and then into yarn and fabric, to the manufacture of products. At the end of the tour, tourists are usually willing to buy towels, table and bed linen, blankets, bedspreads and even clothes as a keepsake.


Granite: mountain landscapes from the BELAZ window
The cost of the tour is 2 rubles (about $0.8).
What is interesting about this plant? At the very least, the fact that it is the largest plant in Europe for the extraction and processing of dense rocks.
Tourists are especially impressed by the Mikashevichi quarry. They say that you seem to have been not in the heart of lowland Polesie, but somewhere in the middle of the Caucasus Mountains. 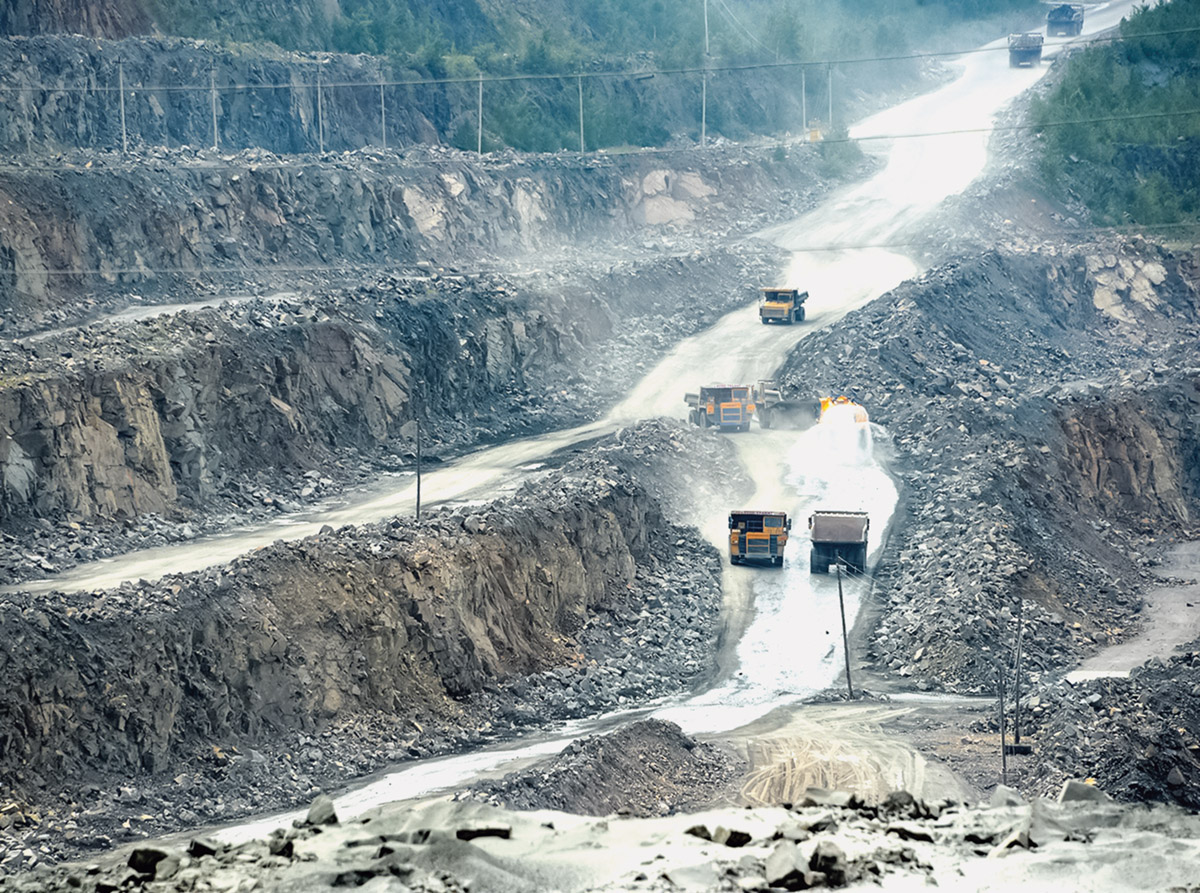 
In 2021 alone, over 2,500 tourists visited Granit, including from Russia, Poland, Lithuania, and South Africa.
In total, more than 30 types of rocks have been incorporated into the museum’s collection including diorite, biotite, garnets in slates. Here, the remains of animals with a thousand-year history are found in a quarry, such as those of the Khazar elephant, woolly rhinoceros, long-haired bison.
By the way, many of the guests do not miss the opportunity to ride a 90-tonne BELAZ. The route of the giant runs along picturesque 20-metre waterfalls at minus 50 metres from the ground level, and at minus 120 you can see the work of drilling rigs up close. The trip lasts an hour and a half. Moreover, according to tourists, the impressions from it are so strong that they are not put off by the amount of 280 rubles (almost $110) for the service. 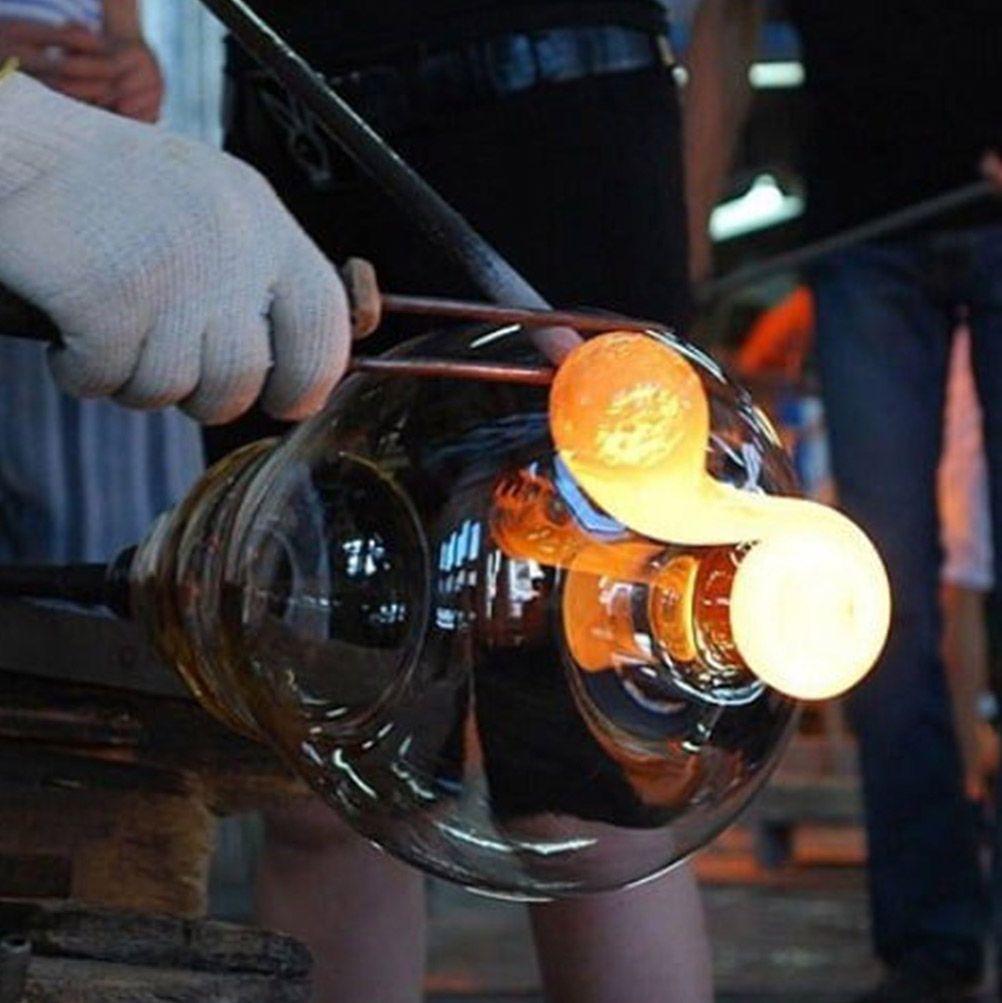 The cost of the tour is 12 rubles (about $4.7) for an adult, and 10 rubles (almost $4) for a child.
The enterprise can be called the Mecca of industrial tourism in Belarus. Last year alone, more than 14,000 guests visited it. By the way, this is the first Belarusian plant, which began to invite visitors back in the 80s. 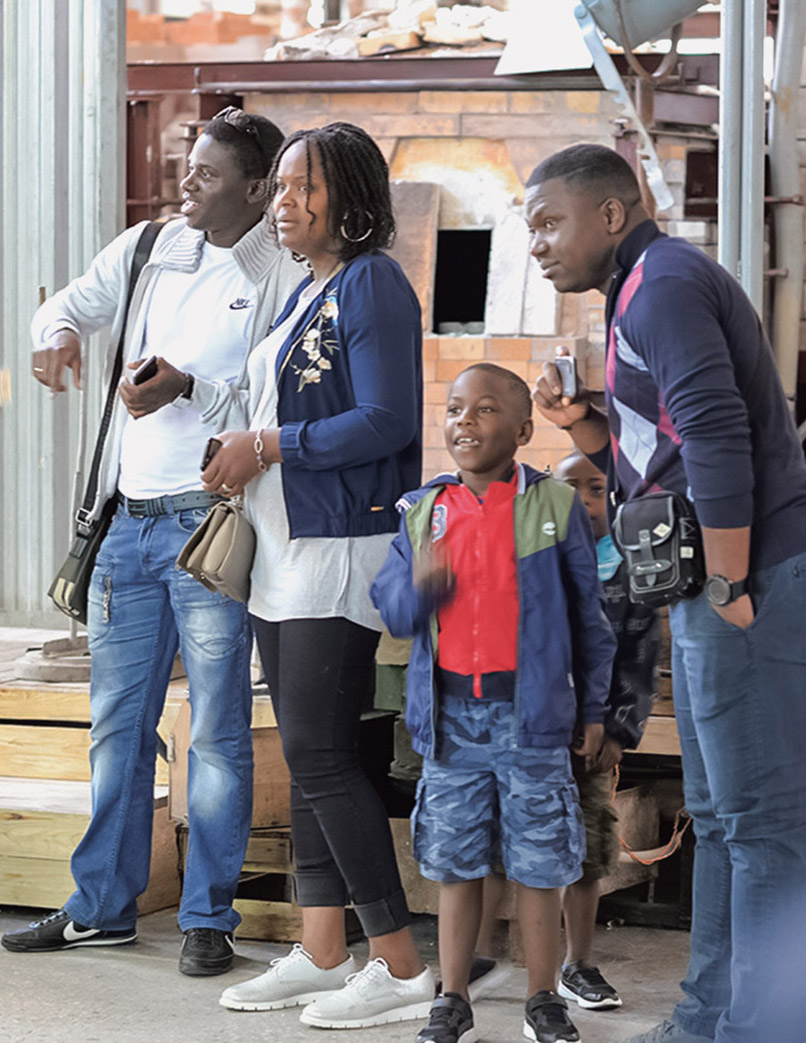 And it has something to show you. For more than a century, unique objects have been made from a liquid mixture using fire and tools in the small town of Berezovka in the Lida Region. We are talking not only about vases, candy bowls and glasses, but also piece goods, such as chess boards, bison, swans, glass slippers.
The museum, where there are old dinnerware set, kerosene lamps and luxury items dating back to 1910, as well as original compositions by contemporary artists, is very popular among tourists. However, the most vivid impressions of the guests are, of course, from the production itself. Tourists can spend a long time near the oven. The master takes out a fireball and blows a dog figurine or a vase out of it. The process is intricate and lasts only a couple of minutes, so the glassblower calculates the moves to accurately embody the artist’s idea. Products are born, which are then sold to astonished spectators like hot cakes.
Industrial tourism brings not only direct financial benefits to the factory with a rich history, but also helps to improve its image. Most of the company’s employees are former Berezovka schoolchildren. The Neman factory can boast dozens of labour dynasties of glassblowers and artists. There group tours, as well as individual ones.