The clergy and the army have always been inextricably linked in our lands. A striking example of this is the history of the Aleksandr Nevsky Church, located in the territory of the Military Cemetery in Minsk. The temple appeared at the end of the 19th century in memory of the officers and soldiers who died in the Russo-Turkish War, and was intended primarily for the 119th Kolomna Infantry Regiment. Although this military unit ceased to exist more than a century ago, its shrine protects Minsk residents to this day.

Both the monumentand the temple 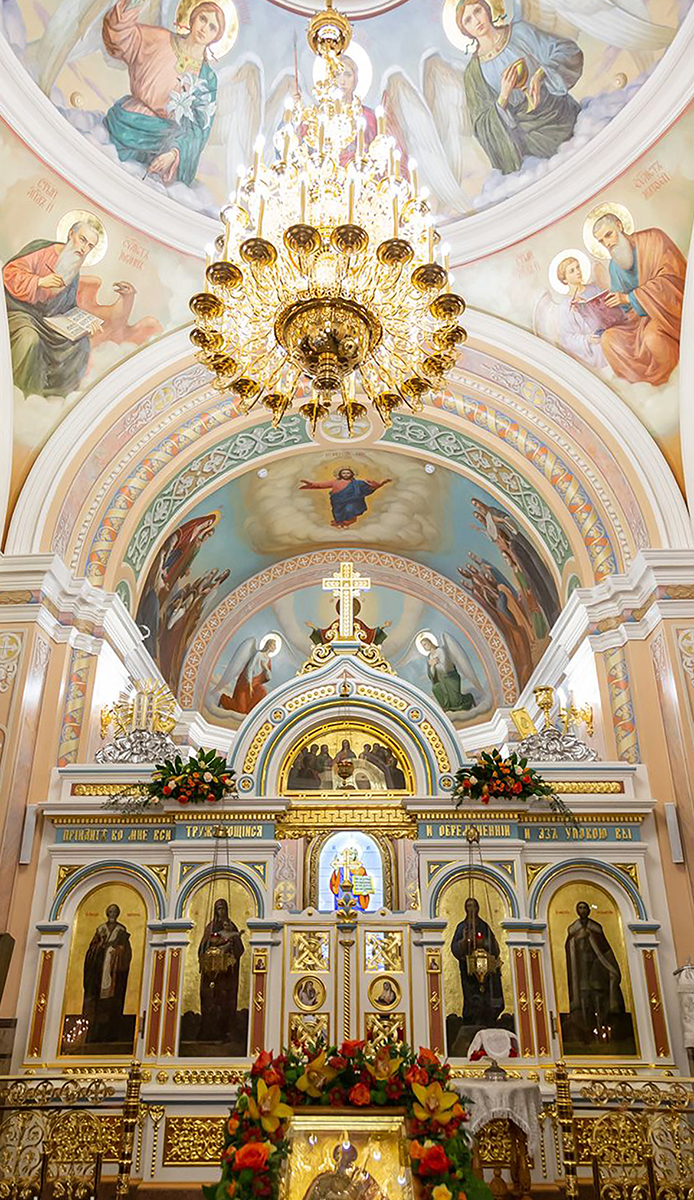 The first thing you think about when you find yourself behind a massive wooden door: is this really a church?.. At the entrance, on both sides, the walls are decorated with murals that you would never expect to see in such a place. On the left, there is a fragment of Vasily Vereshchagin’s The Defeated. Memorial Service (the original is on display in the Tretyakov Gallery), and on the right is an episode of communion of wounded soldiers in a hospital.
“Don’t be surprised. The scenes are most directly related to these walls,” says Archpriest Nikolai Korzhich, Senior Priest of the parish of the Church of St. Aleksandr Nevsky.
The temple was founded by the military for the military. Now the place where it stands is the centre of Minsk. However, in the second half of the 19th century, it was not even on the outskirts, but in a suburb. Here were the officers’ quarters, barracks, warehouses. A real military town. What defined the life here? Battles and the memory of them, of course.
Few know that the character of the famous painting by Vereshchagin was inspired by the Belarusian priest Ioann Nosovich. During the Russo-Turkish War (1877-1878), he served in the 119th Kolomna Regiment. In the first battle, the unit suffered serious losses: 15 officers and over 120 soldiers of lower ranks were killed. The moment of their funeral service and burial inspired Vereshchagin to paint the picture. And Father Ioann himself compiled the first lists of fellow soldiers who died in battle. It was the starting point for the construction of a church near the hospital.
“As conceived by the creators, it was supposed to become a kind of monument in honour of those who fell on the battlefield during the Turkish campaign and at the same time a temple for the servicemen of the Kolomna Regiment,” says Archpriest Dmitry Khoroshko, who today serves as a veteran here.
The construction fell on the shoulders of the priest Pavel Bogdanovich, who was in the Kolomna Regiment. In close cooperation with the clergy, veterans of the Turkish War and the families of the fallen, as well as active military personnel and the authorities, Father Pavel took on a difficult task. By the way, he inspired the second scene at the entrance to the temple. The communion of wounded soldiers is not an abstraction, but a fact from his biography: before the appearance of the Aleksandr Nevsky Church, Pavel Bogdanovich served in the church in the Minsk Military Hospital.


Half of Minsk residents were baptised here

The guidebooks often call the church at the Military Cemetery the only church in Minsk that has managed to preserve its original appearance. But this is only partly true. 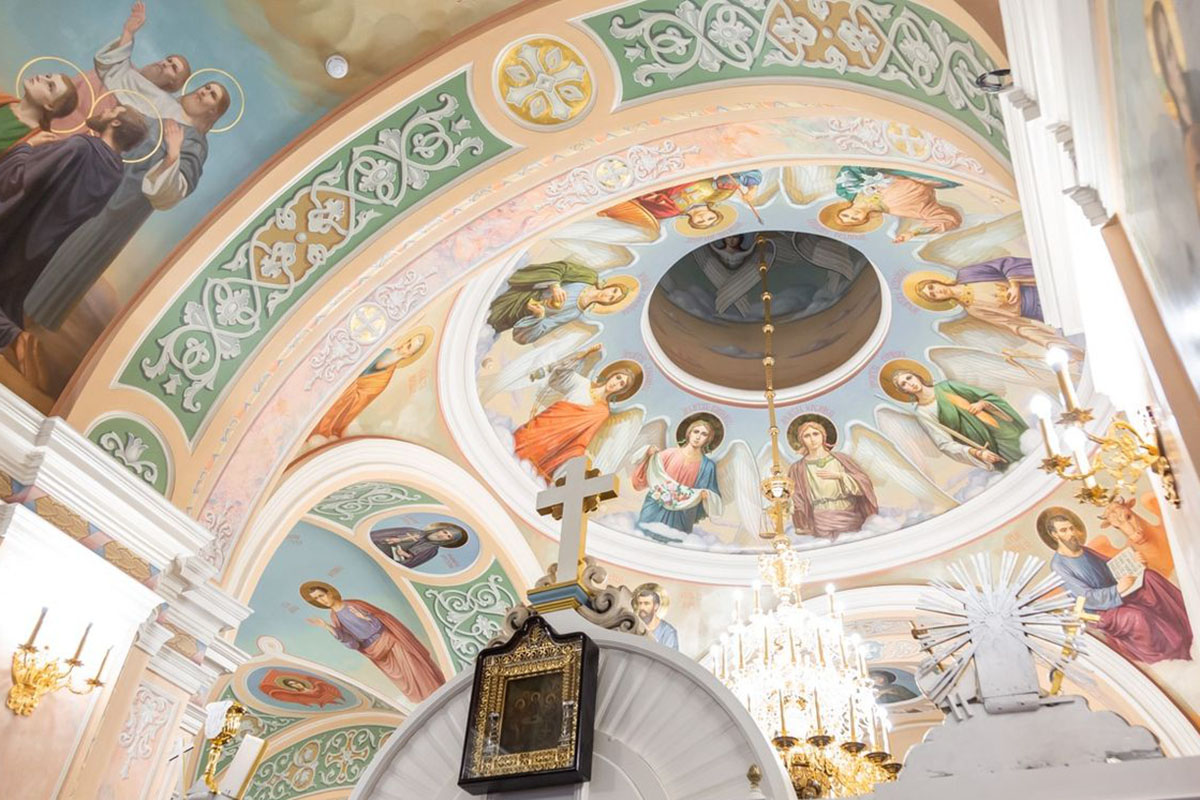 “Only during the reconstruction did we find out that initially our temple looked different. It’s hard to imagine, but in 1898 it was ... without side-altars,” Dmitry Khoroshko reveals the secret. “We have noticed some oddities in its architecture before. For example, under the roof there are certain architectural forms — stucco mouldings, pilasters, cornices. Why would such beauty be actually hidden in the attic? It turned out that the side-altars were completed in the first two years after the consecration of the church. We managed to find the rarest picture without them. But in 1900 it already looked like it does now.”
Despite the fact that the twentieth century brought great shocks to the temple, the building was never used for other purposes. In World War I, the Kolomna Regiment was almost completely destroyed twice at the front, after the revolution it ceased to exist. The church went from the regiment to the parish; in 1937 a lock was hung on the door. But the parishioners spent days and nights inside, not giving icons and utensils for the plunder.
In June 1941, the Military Cemetery was heavily bombed. One of the shells pierced the dome of the church, fell at the icon of St. Nikolai, but did not explode. Isn’t this a real miracle?
“During the war, services resumed and since then have not stopped. In the time of the God-fighting, there were only two active Orthodox churches in Minsk — the Cathedral of the Holy Spirit and the Aleksandr Nevsky Church. We are not exaggerating when we say that half of Minsk residents were baptised in our basement,” smiles Dmitry Khoroshko.
“This temple is an architectural monument. Reconstruction has been needed for a long time,” notes the Senior Priest of the Aleksandr Nevsky Church.
The roof, walls and floor were restored. The main thing is that now the dome and vaults are decorated with hand-painted faces of amazing beauty.


Get to the bottom of it

The original iconostasis has been preserved here. Among the images of the saints there are many donated by the families of the officers who died in the Russo-Turkish War. There are dedication inscriptions. There is even an icon donated to the Kolomna Regiment by Nikolai II himself.
“Let’s be objective: there are few churches in Belarus with so many worshipful icons that have come down to us through the difficult 20th century,” says Father Nikolai. He doesn’t hide, “We had to select murals for them, not vice versa.” 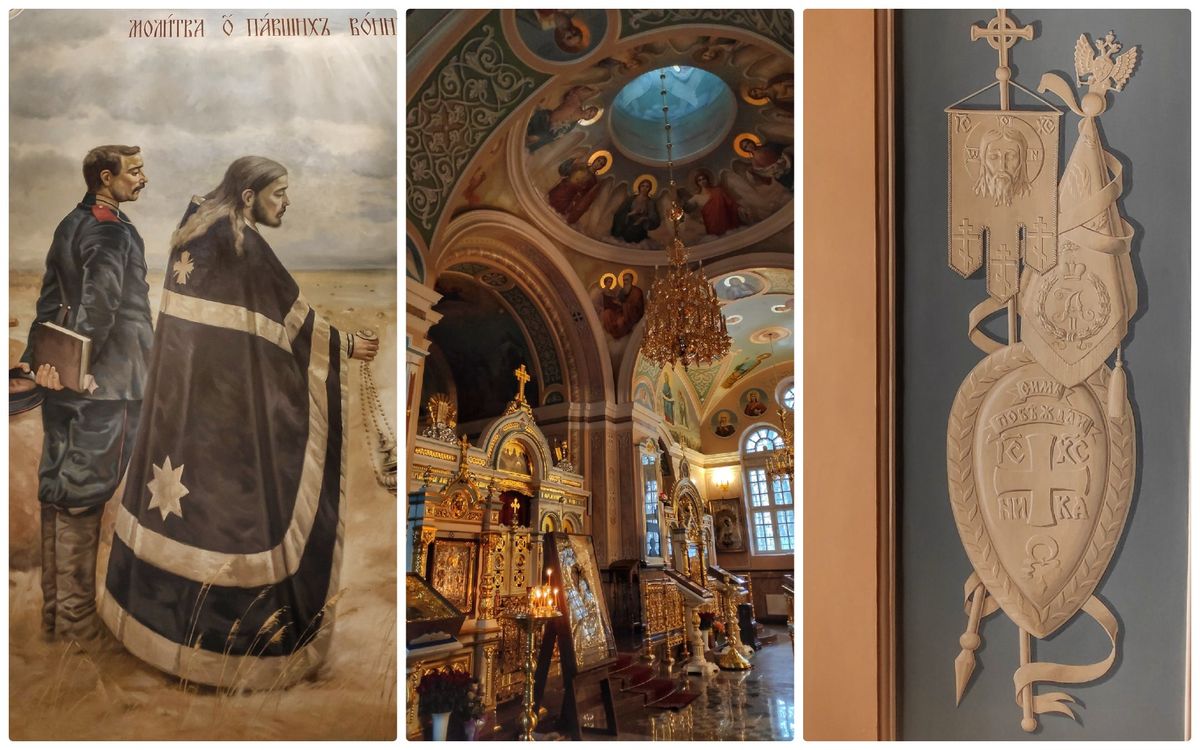 In order not to destroy the style set by the icons, utensils and interior details of the 19th century, the murals were made in the academic style. For this they invited Palekh masters who work in pre-revolutionary traditions.
The Kolomna Regiment, which gave life to the Aleksandr Nevsky Church, has been gone for more than a century. However, the church still bears the memory of it to its contemporaries. Here, every detail is speaking to you: from graves and slabs with the names of those killed in the Russo-Turkish War to the regimental coat of arms over the entrance and laurel wreaths, banners, and sabres in the paintings.
The Belarus Segodnya Publishing House has been ‘patronising’ the graves of several Belarusian writers buried at the Military Cemetery in Minsk for several years. Among them are the graves of the classics of Belarusian literature Pavlyuk Trus and Kuzma Chorny, as well as of the author of the text of the anthem We, Belarusians Mikhas Klimkovich and others. 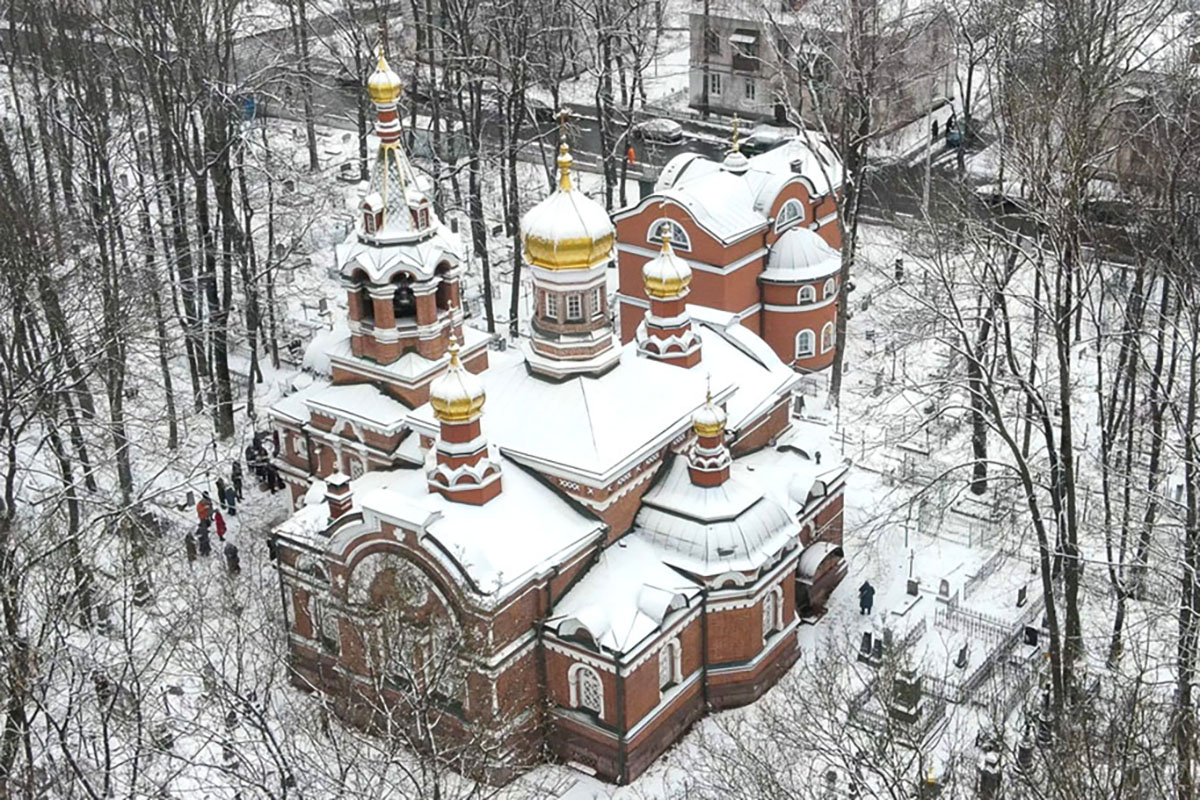 Victor Drazhin, Chairman of the Board of Trustees of the Temple-Monument in Honour of Aleksandr Nevsky:
Our church is of great importance not only for Minsk and its inhabitants, but for the entire Belarusian people. Taking this into account, His Grace Filaret blessed us for its reconstruction in 2017. A colossal work has been done in the shortest possible time. We did not renovate the temple, but restored it in the way that was intended by its creators at the end of the 19th century.
It is gratifying that the state supported us at all stages. Fruitful collaboration attracted many caring people and even entire organisations to support and preserve the shrine.
Pre-design work is already underway to restore the facade of the church. In addition, there are plans to attend to the restoration of the graves of the soldiers of the Russo-Turkish War, the fraternal burial ground of the soldiers of the First World War, which are a couple of hundred steps from the temple. In general, the Military Cemetery requires special attention. This is, without exaggeration, a national pantheon. Poets and writers, artists and art workers, great people of medicine and scientists are buried here together with the heroes of several wars.

BY THE WAY
During the reconstruction, the temple was replenished with new holy relics. Thus, through the efforts of a benefactor, an image of the Mother of God with a Child (Hodegetria) was brought from Athos.
With the blessing of Archbishop Guriy of Novogrudok and Slonim, icons with the relics of Blessed Matrona of Moscow and Saint Luke of Crimea appeared in the church.
Furthermore, an altar cross was made for the Aleksandr Nevsky Church, which was created in the image of the Cross of Saint Euphrosyne of Polotsk. The Abbess of the Saviour-Euphrosyne Convent Evdokia handed over part of the relics that are kept in the monastery especially for it.