The President of Belarus traditionally took part in the celebrations in honour of the Victory Day on May 9th. The Head of State laid a wreath at the Victory Monument in Minsk. Together with Aleksandr Lukashenko were his three sons. 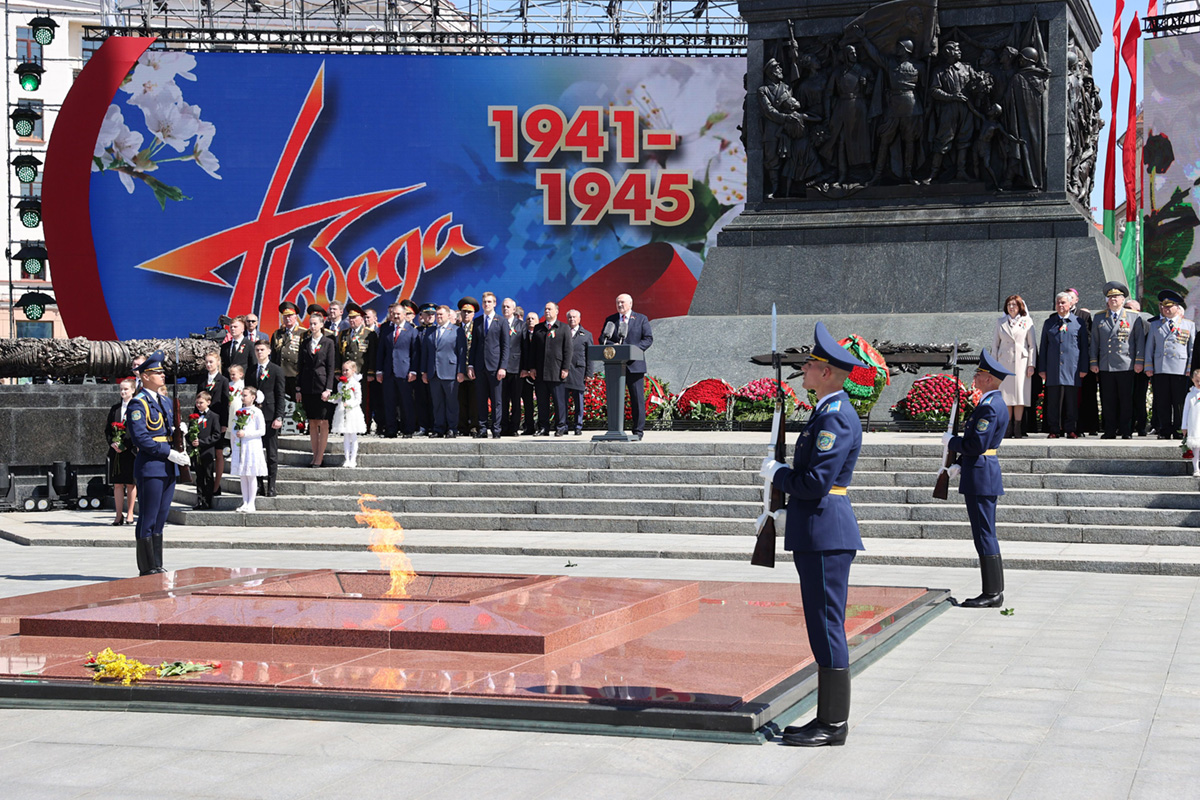 Speaking during the solemn ceremony, the Head of State stressed that Belarus remembers everyone who held back the enemy on the border and at the Brest Fortress, near Minsk and Mogilev, who was tortured in the Gestapo dungeons, who was burned down in Khatyn, Dalva and Trostenets.

“Knowing and understanding the place of Belarus and my place in today’s world, I nevertheless, as a representative of the victorious people, appeal to the peoples of western countries. I emphasise that my address today is to you, people like us. Your politicians have worked hard to make you forget to whom the world owes liberation from fascism. Today, not many people living outside Belarus and Russia know that the Second World War was won by Soviet soldiers, by the Soviet Union, that the Second Front, which is much talked about in the West today, was opened only in the summer of 1944 when the victory of the USSR was assured. It may seem so strange, but the victorious advance of the Red Army, which led to the defeat of Nazi Germany, was seen as a threat by the mighty of the world, no matter how strange it may seem today. Therefore, they immediately set a course to denigrate and demonise the Soviet Union and the Slavic world,” noted the President.

Aleksandr Lukashenko stressed that unfortunately today the medieval fight for territories and resources continues. It is just that crusades have been replaced with the expansions of foreign funds. We are now witnessing the same old aggression, now under the slogans of human rights and some kind of sustainable development. In fact, Western politicians do not want to admit that billions of people on Earth have been living according to their own laws for centuries. To create the world in its own image, the West is trying to weaken those who live and think differently.

“Addressing the peoples of the West, I want to say: you are not so blind as not to understand all the monstrous ramifications of the failed attempts to reorganise Libya, Iraq, Syria, Afghanistan and other countries by force. This all has happened recently. Did you succeed? Democracy on the wings of NATO fighter jets has brought these countries only pain and suffering, casualties and destruction, economic chaos, and any lack of prospects. No puppet government that you brought to power there managed to turn their countries into a blooming oasis. I want you, the peoples of the West, ordinary people in Paris and Berlin, Warsaw, New York, Brussels, Amsterdam, dreaming of a green Sahara, of saving the Amazon forests and feeding children of Africa, to know that your money, a lot of your money is spent on the most garden-variety genocide. You are not saving any Sahara, you are not saving any forests, and you have not fed the children. You were used without your knowledge — in Yugoslavia, Libya, Iraq, Afghanistan, and now in our Ukraine,” the President said. 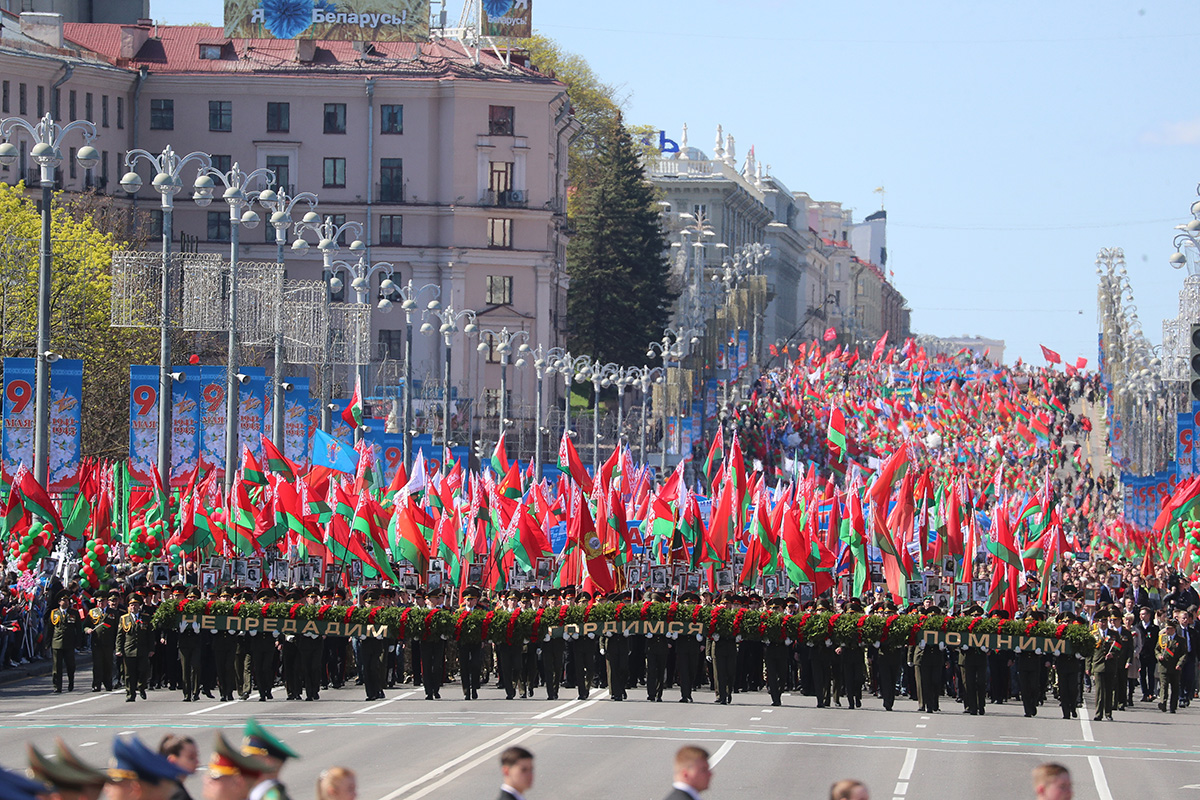 He also added that followers of the Nazis are obsessed with the idea of revanchism. Nevertheless, they are not willing to fight openly with the heirs of the Soviet people, “Well, apparently they’ve learned their lesson. Therefore, they pump Ukraine with weapons, fight with memorials, symbols, veterans, prisoners of concentration camps and even their families.

In the darkest dream, we could ever imagine that Nazism would rear its head again there, in the fraternal country, which miraculously survived under the boot of the fascist occupiers. It is the Western elites, who have nurtured ‘this monster’ in Ukraine, overthrew the legitimate government, made Nazism the state ideology, and pitted the kin peoples of Ukraine and Russia against each other. What mad European politicians do not understand is that, using fascism and Nazism in Ukraine today, they will have to fight against it tomorrow. Because it cannot be contained within the borders of one country. It will sweep across Europe tomorrow.”

Aleksandr Lukashenko noted that no one abroad cares that the Belarusian army is not taking part in the military operation, “We are peaceful people, but do not even try to speak with us from a position of force. Your dreams of driving the Slavs into a new slavery, which you call globalism, are unrealistic. All attempts to strangle us only make us stronger, and our fight inspires others. Because billions of people are looking at Belarusians, Russians, who are again fighting the world evil. China, India, Latin America, Africa, Arab states... Everyone is tired of the American diktat!” 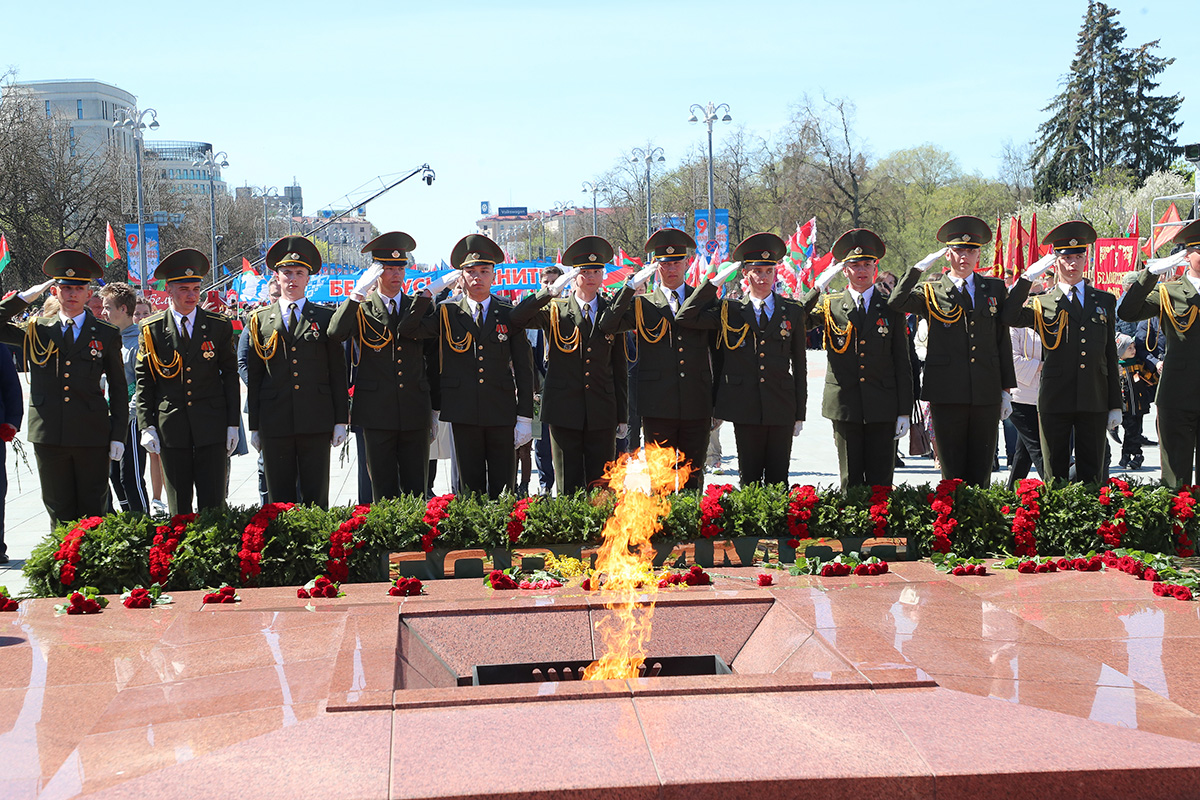 The President of Belarus stressed that the leadership of Western countries will never tell the Europeans the real truth. British, French, American media continue to paint Russia and Belarus black, forming a false image of the aggressor in the minds of their audiences, “Their interpretation may be imprecise to the point of absurdity, when it is forbidden to think that the first human in space was a Soviet citizen, the works of world-famous Russian classics are forbidden. Isn’t it time to hear each other and stop? After all, none of you wants a war. Yet European capitals have done everything to make it happen. It is no secret that the entire Western world is at war against Russia in Ukraine. We are reproached for supporting Russia. Come to your senses! Belarusians have neither the legal nor the moral right to abandon Russia. We’ve always been together, we’ve always been one.” 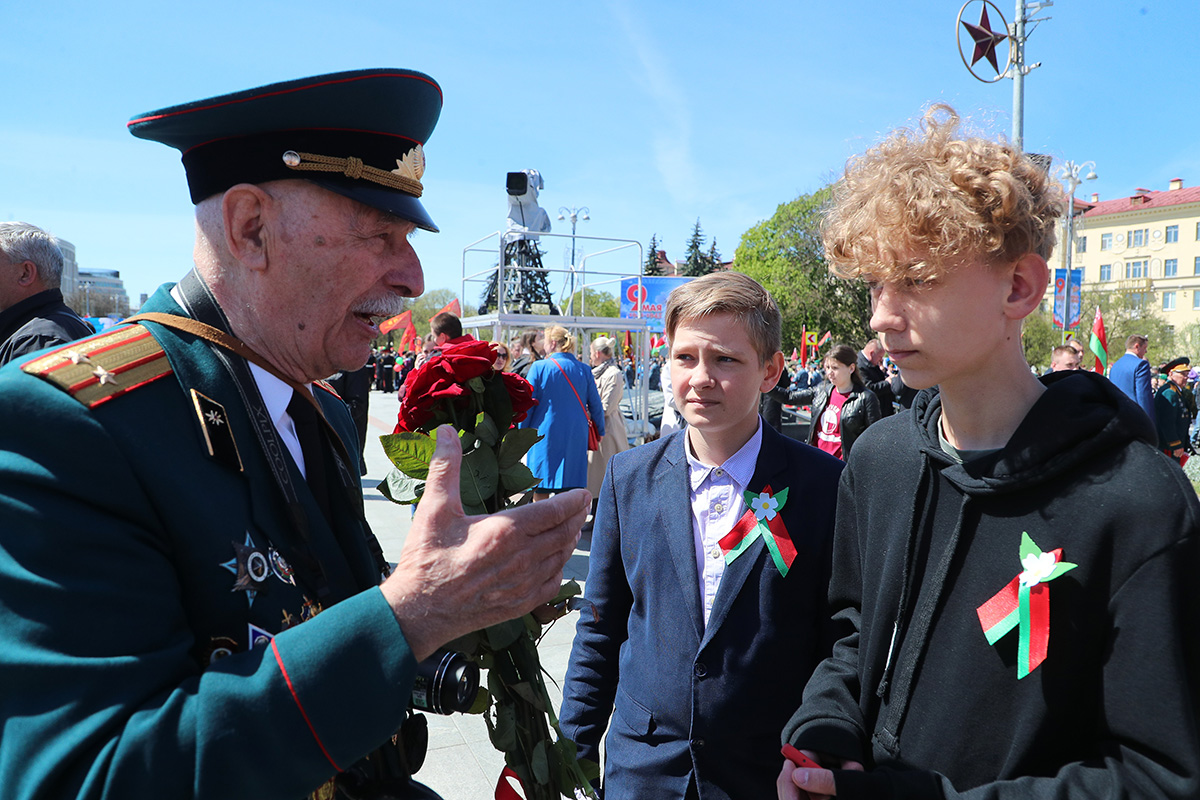 The President of Belarus, addressing ordinary Europeans, asked them to think about one important fact: a world where everyone’s interests are respected is more reliable than momentary decisions about joining NATO or building a fence in the middle of Europe through the thousand-year-old forest of Belovezhskaya Pushcha.

“So where are you, environmentalists? Why are you keeping silence? Why don’t you go there to save animals that have lived for centuries and have seen no boundaries? Where are you? You are hypocrites and scoundrels. Think and re-analyse: Belarus proposes to create the world together, like a neighbour, but for this, you must stop at least teaching us how to live. Think hard about this. Think about ways to bring to the attention of your leaders the things that really matter to the future of the planet,” said the Head of State. 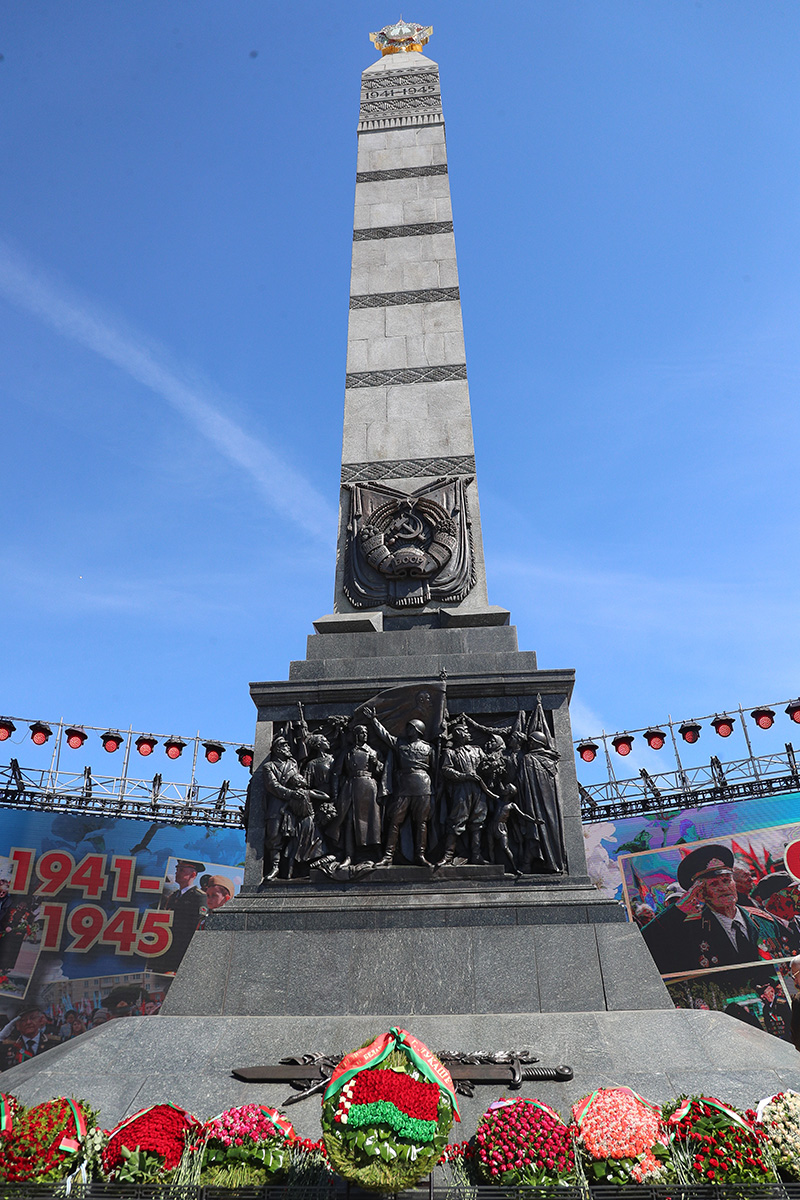 The President had a warm conversation with the veterans after the solemn event. Despite their advanced years, representatives of the generation of winners met the President who approached them standing up.
Words of gratitude were repeated many times, as well as wishes for many more years of life during the conversation of the Belarusian leader with veterans. “I have to repeat the order again: please live as long as possible! Thank you for everything! We owe you! Please live! You have already done your job. Therefore, only live,” wished the Belarusian leader.
Then the President answered the journalists’ questions. The Head of State paid special attention to the significant number of participants in the event on Victory Square, calling it ‘a huge ocean of people.’
The Head of State was asked about the economic genocide that Western countries have actually unleashed against Belarus, and whether it is possible to somehow overcome this pressure.
“We are doing well. What can hurt us are incompetence, mismanagement, and negligence,” answered the President. As a positive factor, Aleksandr Lukashenko noted that the country has preserved the production of key goods, including staples and food.
“Mr Guterres has already urged to lift sanctions on Belarus and Russia immediately, because without mineral fertilisers there will be no food, people will die of hunger. Fuel? We see people from Western countries pouring into Belarus with canisters, kegs, pots to fill up cars and take something with them. This is just the beginning,” reminded Aleksandr Lukashenko.
The representative of Lithuania thanked Aleksandr Lukashenko for the fact that the Belarusian side opened the borders, “Ordinary people come, we get something from you. For example, fertilisers. There are people who have low wages. They buy fuel...”
“Get organised and tell us at what point on the border we have to bring fertilisers, cereals, salt and so on. We will do it. Because Lithuanian are peace-loving, kind, decent people. Such as Belarusians. All these Landsbergis, Linkevicius and others are just a fluff. All that will go away. These are the madmen,” the President responded.
The Head of State was asked a question about the recent reports on the internet that Poland is planning to attack Belarus, and is holding large-scale military exercises.
“Let them try. We defeated enemies here much stronger than Poland… Although I am concerned about this as well. I have always told the military: we should not miss anything. We must not repeat 1941. Therefore, we will respond,” said the President.

Based on materials of sb.by and belta.by
Photos by BELTA and Aleksandr Kushner