2020 Olympic Games winners have received well-deserved bonuses from the state, while the National Olympic Committee and the Ministry of Sports and Tourism discussed further ways to success 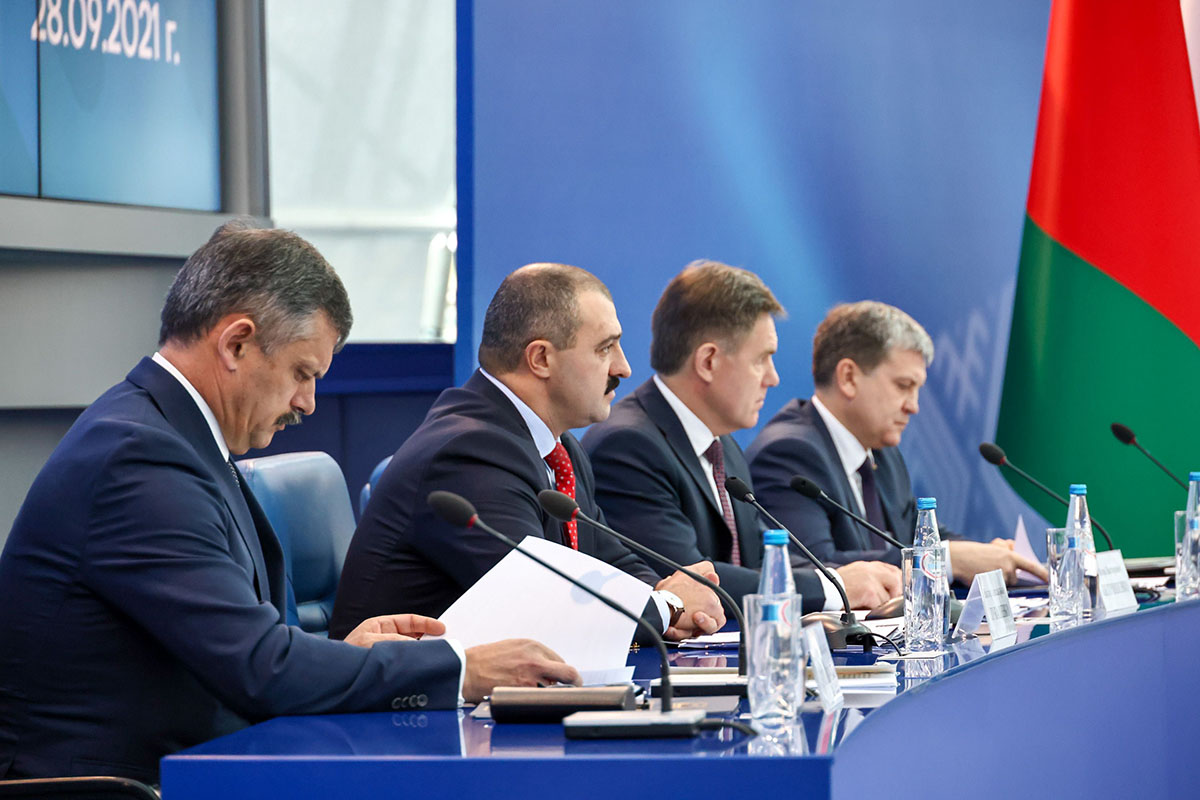 It was noisy and festive at the headquarters of the National Olympic Committee: the Olympic and Paralympic medallists once again bathed in glory. Honours, kind words and monetary vouchers found their worthy holders. Personal and first coaches, as well as federations of the particularly successful sports were not left without attention — receiving serious financial support. Actually, the Tokyo Games are already in the past and Paris 2024 is looming ahead. Accordingly, a joint meeting of the National Olympic Committee and the Ministry of Sports and Tourism focused on this issue. The event was attended by the Deputy Prime Minister — Igor Petrishenko, the Deputy Head of the President Administration — Igor Lutsky, the NOC President — Viktor Lukashenko, the Minister of Sports and Tourism — Sergei Kovalchuk, as well as heads of all Summer Olympic sports federations.
The body is like a mechanism: without working, it rusts. Athletes know this well. It was nice to see our honoured Olympians again — all at once, at the same time, in the same place, smiling and festive. They were happy and it was a pleasure to replay in our memories the inspiring and joyful triumphant moments of Tokyo 2020 and to talk — wishing each other good luck. It was wonderful to enjoy the process when medals and labour are miraculously embodied in tangible material well-being: the presentation of monetary certificates is necessary and, of course, pleasant. 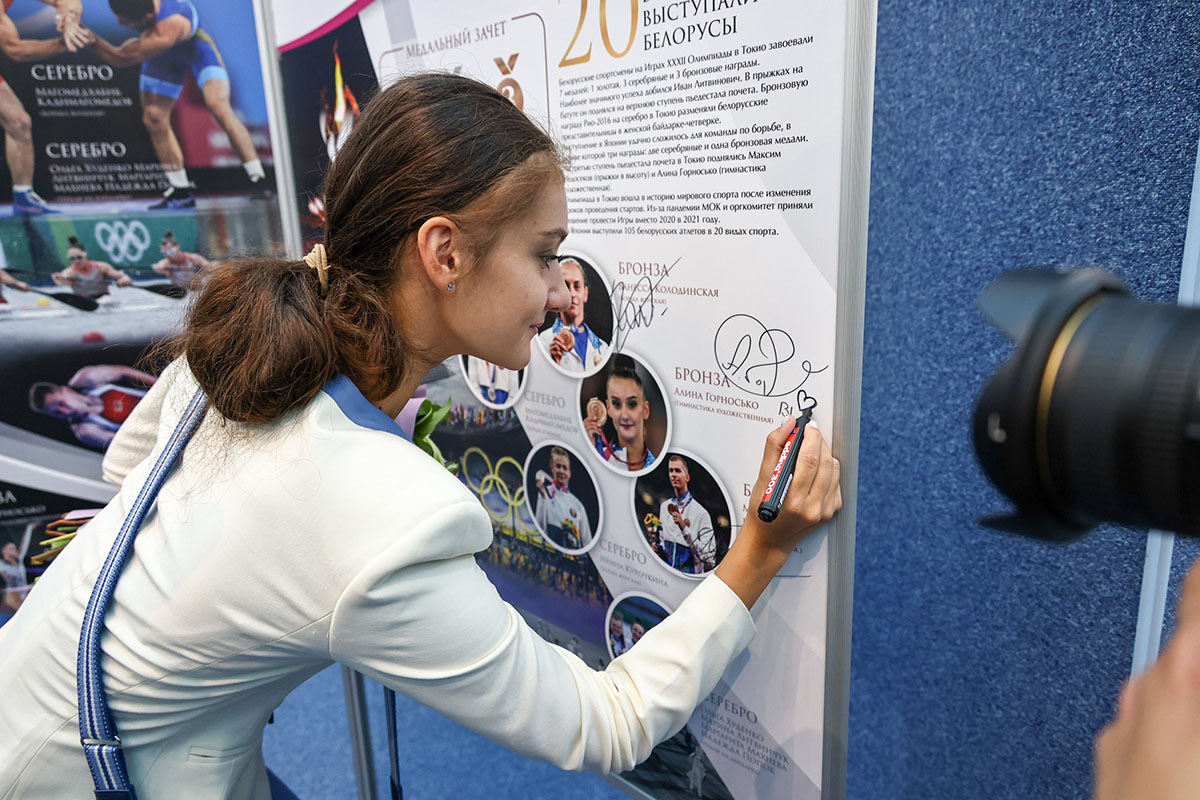 However, in the atmosphere of the Olympic Hall of Fame, the feeling of celebration was mixed with another one: excitement and shining eyes. The heroes of Tokyo were eager to fight again. Some want a rematch. Some seek a new dose of adrenaline. However, they all have a great desire to realise themselves again, to glorify their names and native Belarus.
The NOC President, Viktor Lukashenko, heartily congratulated the Tokyo 2020 medallists and those who had contributed to their success. However, he noted that not everyone coped well and some failed to show the expected results. Viktor Lukashenko added that the state will continue paying close attention to the development of sports and support athletes, but the Tokyo Olympics have already become history. The 2024 Games in Paris are next in line, “The return of the sports industry should correspond to the funds invested by the state. It’s also necessary to seriously analyse the structure of the management personnel of physical culture and sports organisations and evaluate the results of their activities. The most important thing is to get ready to work for the future Olympics in Paris, to make all the necessary decisions. We will continue the practice of financial support for athletes and coaches. It will, of course, directly depend on the results achieved and the medals won. Those who performed well in Tokyo are great but there are enough problems in our sport and some of them were exposed at the past Games.”
Our archery athletes pleasantly surprised us and, accordingly, received a significant financial award from the state. However, how is it possible to look calmly on our failure in weightlifting competitions? Was everything successful in swimming, shooting or equestrian sports? These and other issues were high on the agenda of the recent meeting. 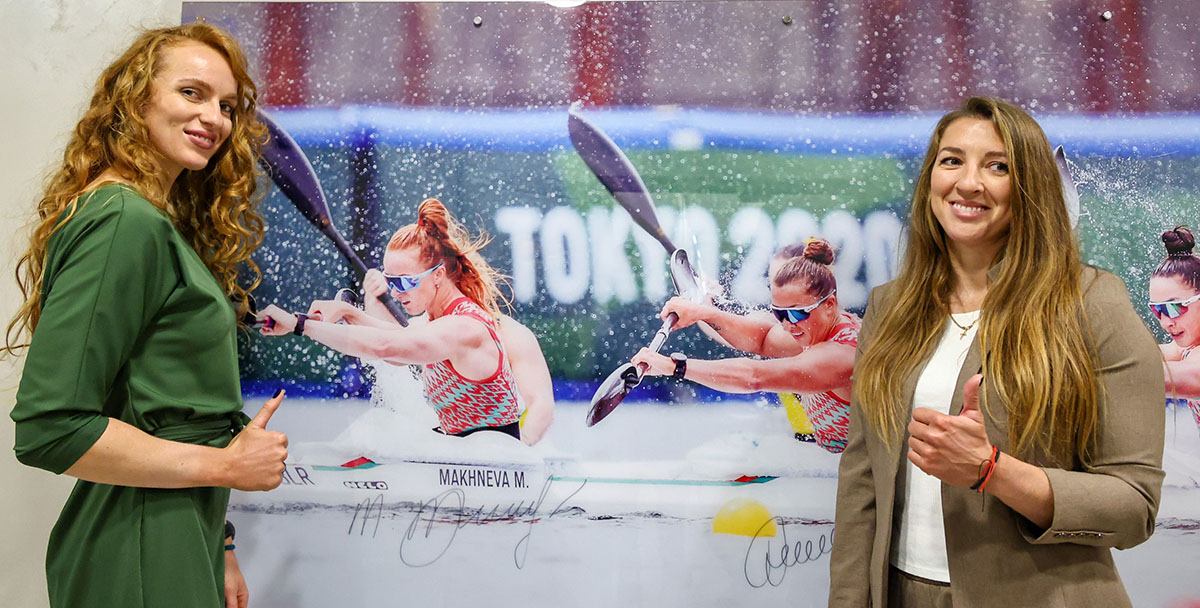 Deputy Prime Minister Igor Petrishenko noted that the athletes received well-deserved awards, but it’s now necessary to assess what failed, “You know that relevant critical comments were also made by the Head of State. So let’s evaluate why it was not possible to achieve the best result and see what needs to be done in order to take into account the mistakes that were made and perform well at the upcoming Summer Olympic Games in Paris. In addition, if necessary, where possible, we will adjust the preparatory work for the 2022 Winter Games in China, which is now at the final stage — so that our sport occupies a worthy place in the international ranking based on the results of various international events: the Olympic Games, world and European championships. Our country has everything necessary for this: infrastructure and financial incentives. The task is only to ensure that all this is implemented qualitatively by the coaching staff and our athletes. Together we must do this work. Then there will be the result that we plan and that people in our country are waiting for in order to be even more proud of the achievements of our state.”
Three years is a long time, but it will fly by, as usual, unnoticed. In order for us to have something to be proud of in Paris-2024, it is necessary to start working hard right now: tomorrow it will be too late.

Sports victories are not an end in themselves. Today, an athlete is a notable and rather significant figure in society. Their life and career are always being watched and interested. After all, in honour of their victory, the national flag is raised and the national anthem is played. They do it, I want to believe, as the song says, ‘for the beauty of sports, for the sake of their homeland!’. Champions should show the younger generation an example of selfless work, readiness to defend the honour of their country, an example of patriotism. Why do the people need ‘champions’ who, even if they have high sports results, work for the destruction of civil harmony in the country, the economy, advocate the impoverishment of people, the loss of sovereignty?