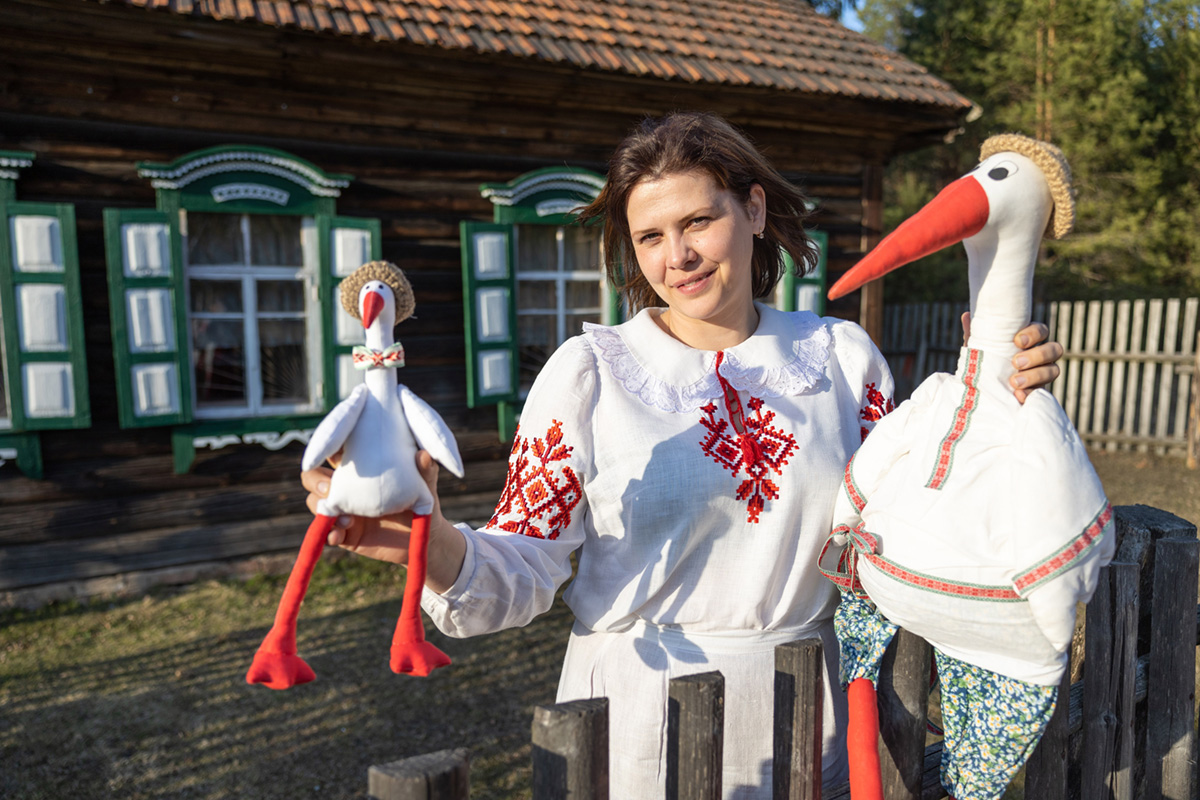 A red-haired boy in a polka-dotted shirt and bast shoes. Funny grannies with pillows. Storks in overalls with Belarusian ornaments... The creations of the pupils of the Businka [Bead in Belarusian] children’s studio of arts and crafts of the Centre for Crafts in the village of Glusha in the Bobruisk District make you smile. By the way, storks, which schoolchildren make under the supervision of the head of the studio Laura Fomtsova, have become for many people not just a souvenir, but a talisman. They are purchased by those who dream of becoming parents. 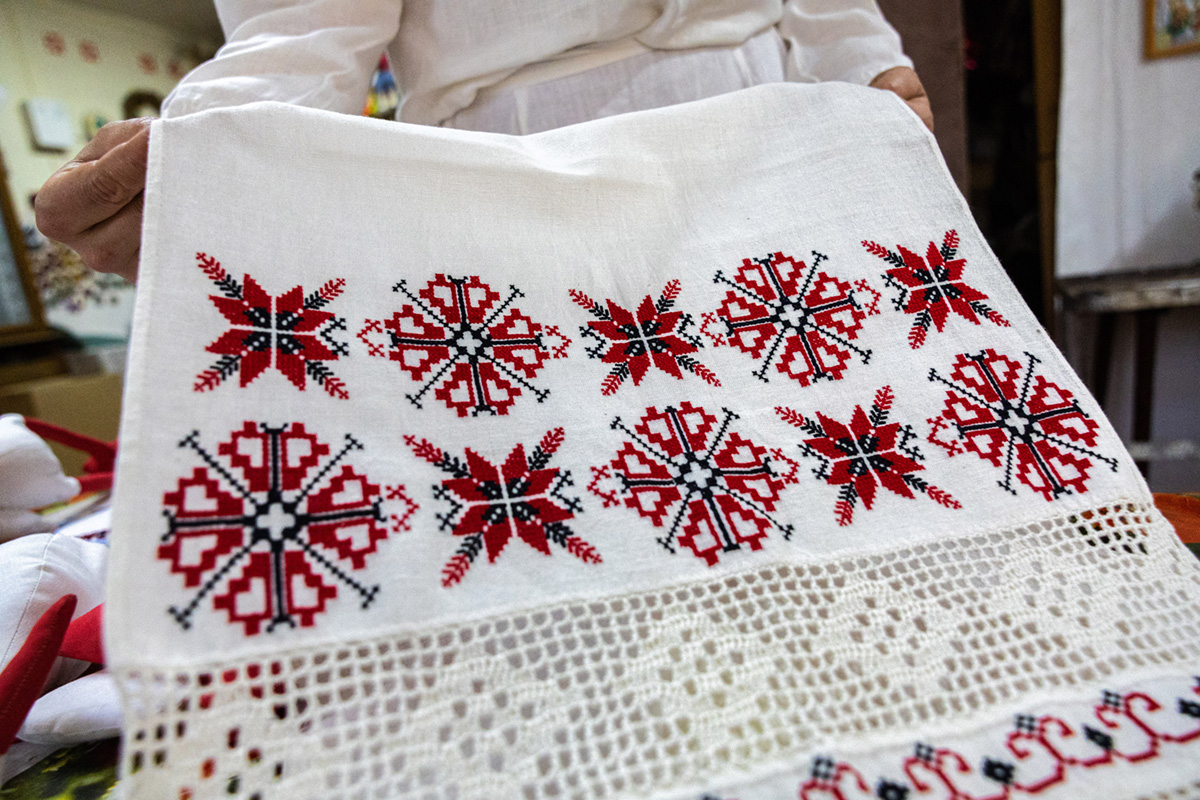 “There are a lot of Slavic amulet dolls. According to legends, such talismans made of straw, thread, fabric, wood, promised good luck for travellers, protected the house from any harm, helped to find love and harmony... When I decided to sew a stork, I did not think that it would be a bird capable of fulfilling sacred desires. I am a Russian, a native Muscovite, for me Belarus has become a second home. A stork, or ‘busel’ in Belarusian, has long been considered among our peoples a symbol of national purity, rebirth, whose white wings, as folklore says, protect our land from evil forces. Our ancestors believed: if a stork settled nearby, there would be prosperity and happiness in the house. They also associated storks with the hope for new additions to the family. It so happened that I saw a stork pattern in a magazine when I was pregnant with my son. I took note, added the author’s vision... I made the first birds in children’s style: their pants, hats were made of flannel, with flower and berry patterns. Over time, I decided: since the stork is a cultural symbol of Belarus, it should have clothes with national ornaments,” admits Laura Bagmanovna.
Patterns, ornaments are the work of the craftswoman herself. The task of the kids is to competently fill the doll with synthetic polyester batting, carefully sew it, attach a red beak and legs. Anna Tishkevich, the head of the Sunduchok Idey [Chest of Ideas in Belarusian] studio of arts and crafts, is responsible for straw hats for birds.
The idea with the storks was a success, the first birds ‘flew away’ instantly. Today they are in the collections of not only Belarusians, but also Ukrainians, Russians, Lithuanians, Latvians.
“Several women who had problems with conception shared the good news after they bought our toy. They say that the amulet worked! Of course, we and our dolls are not magicians, but it’s not for nothing that they say: miracles happen to those who sincerely believe in them,” Laura is candid.
She is the mother of three sons: 15-year-old Gleb, 13-year-old Arseny and Yelisey, who is not even 5 yet. Their family is very creative. The boys are fond of music, they like to draw. Laura’s husband Nikolai, who is a builder, decorates the walls of customers’ houses with stucco mouldings and bas-reliefs. 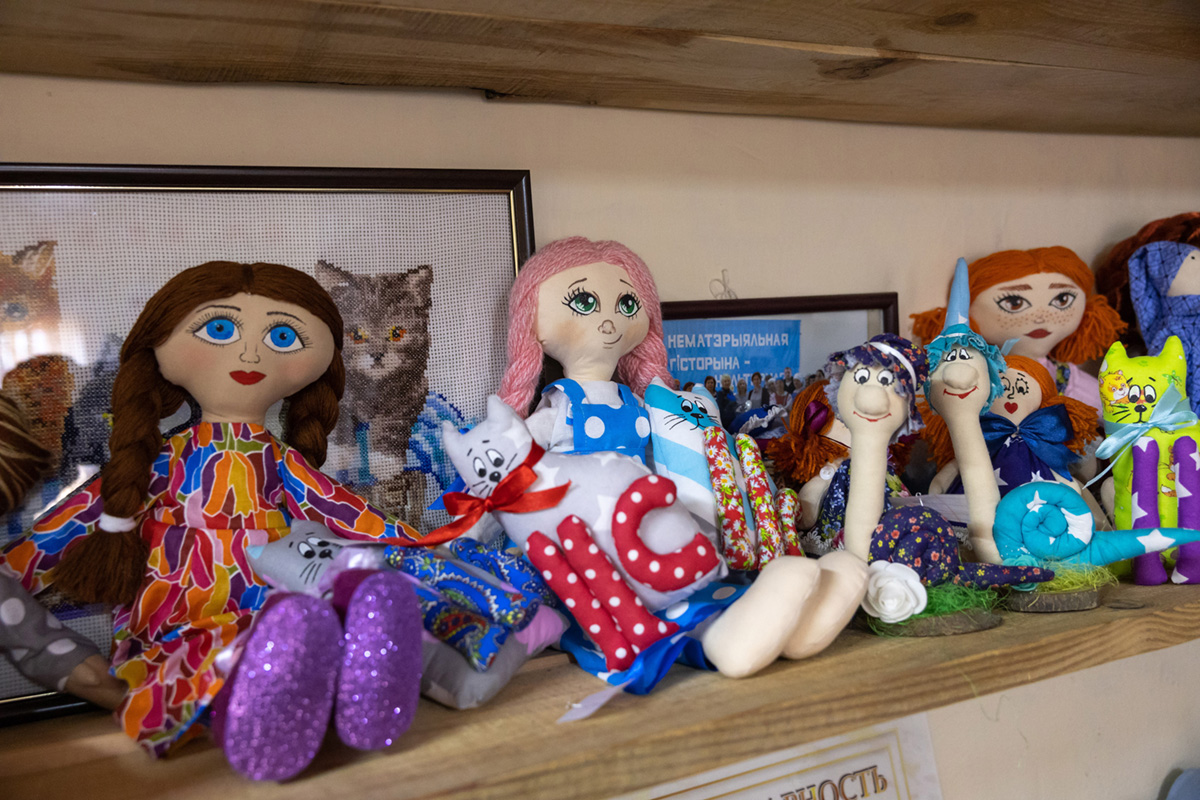 “Because of him, I left the Russian capital for the Belarusian one. 15 years ago I moved to Minsk, lived there with my husband for three years, and then he decided to move to his small homeland, to the Bobruisk District. I supported the idea and do not regret it at all. The village is a storehouse of national traditions. We have an open-air museum in Glusha, a whole complex of old buildings that were brought here from different parts of the country back in the 80s: the wooden church of St. Panteleimon and the mill of the 19th century, the weaver’s house, the rich man’s house, the poor man’s house, which are more than 100 years old. Some buildings were given over to our Craft Centre, they house a pottery workshop, folk art studios, where mentors teach children from Glusha and the neighbouring villages of Gorokhovka and Doinichevo the secrets of the craft,” says Laura Fomtsova with a smile.
There is a lot of beauty in Glusha: products made of straw, wood, clay, fabric, thread, colourful embroidered shirts... 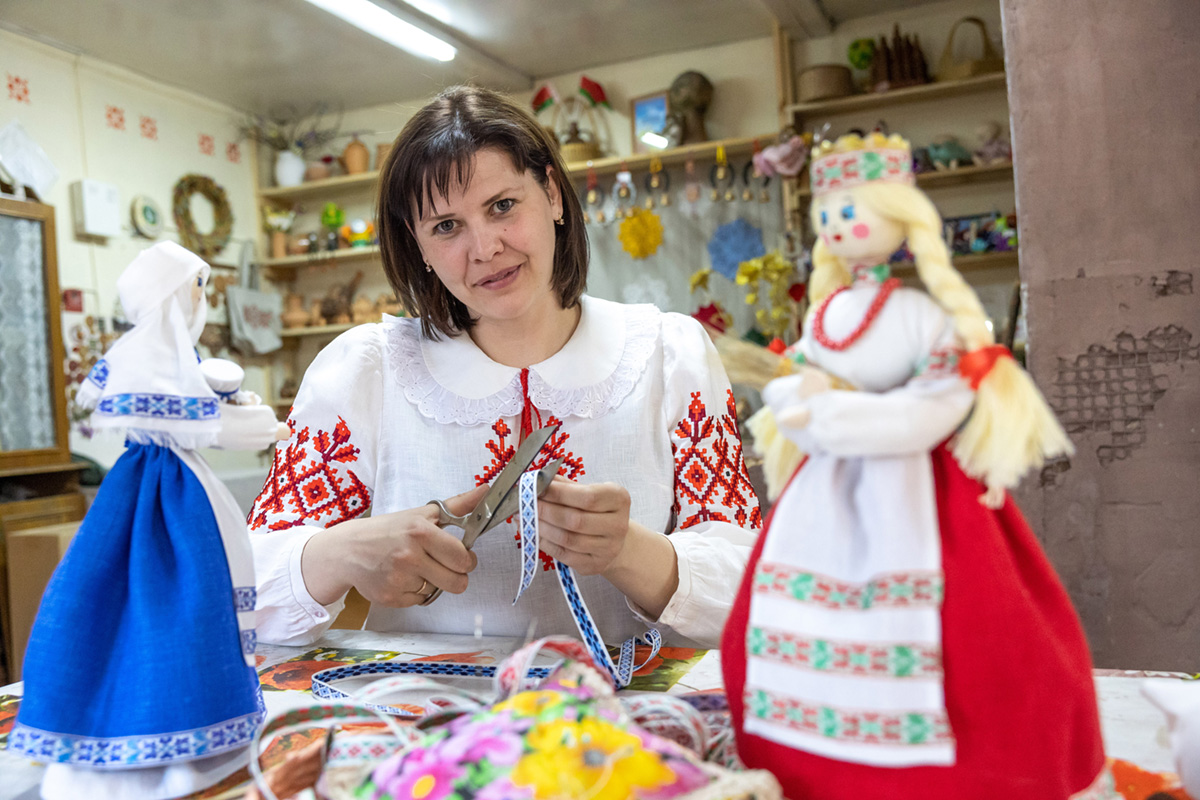 “Belarusians are very sensitive to cultural heritage, they revive and preserve original crafts. Our teacher Anna Tishkevich has a wonderful needlewoman mother, five sisters are passionate about embroidery and knitting. Recently, the former artistic director of the Centre of Culture Lyudmila Vecherko came to work with us. Her wickerwork is amazing, and she teaches local schoolchildren how to do it. I am very glad that young people are interested in folk art, not only residents of Bobruisk, but also residents of Mogilev and Minsk come to us for master classes. We participate in various holidays, festivals in Belarus and Russia,” says Laura, who not only teaches classes in the studio, but also manages the Crafts Centre. She is sure: every person should know the culture, traditions, because this is the genetic code of the nation, “My family is multinational, and everyone brought something of their own to it. When my great-grandmother Fenya, who lived in Penza, came to Uzbekistan for the summer, all her friends there opened their chests. For a year they bought the best fabrics so that she could sew authentic dresses from them. My Azerbaijani grandmother Samaya wove amazingly beautiful handmade carpets. Now here I am, visiting my mother, two sisters and four nephews who remained in Moscow, bringing them souvenirs made by myself. I love both Belarus and Russia very much. And when they ask me when I travel, where I’m from and where I’m going, I answer: ‘From one home to another’.”