Independence Day greetings addressed to the President of Belarus, Aleksandr Lukashenko, and the Belarusian people have come from leaders of foreign states, international organisations and integration associations, foreign political and public figures – as reported in the Belarusian leader’s press service 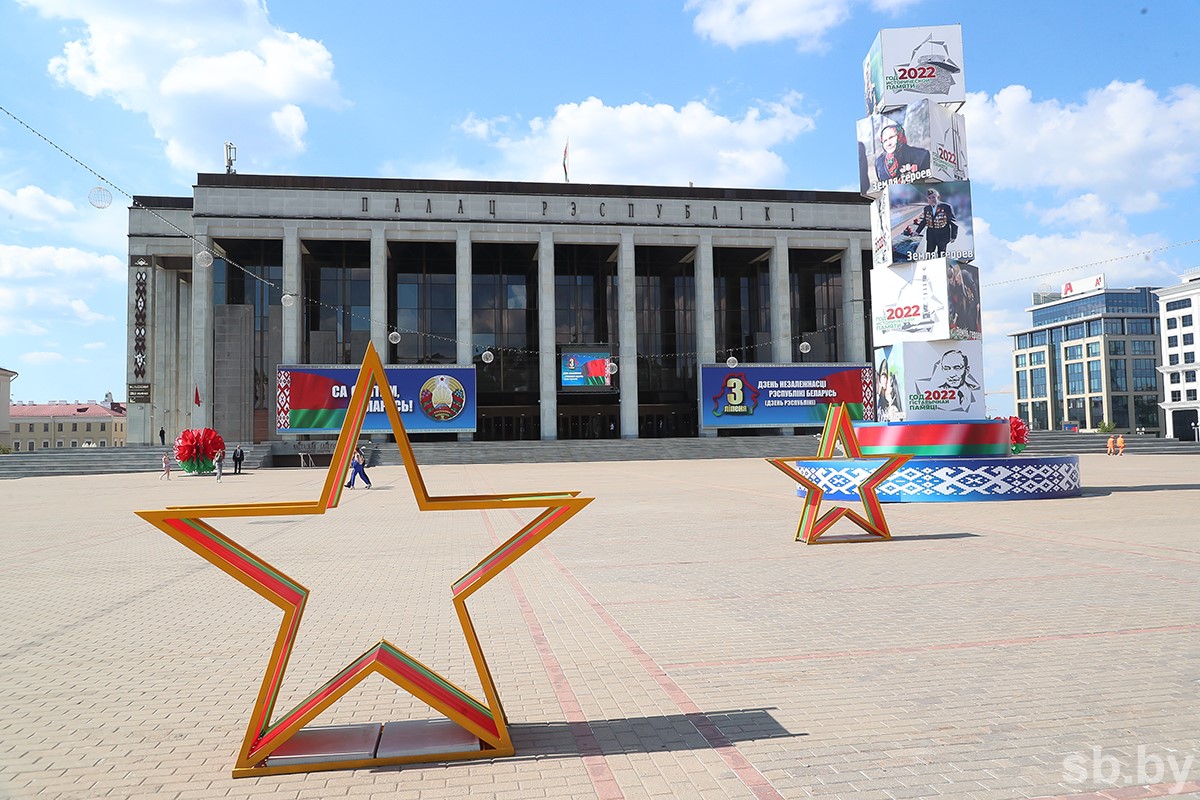 “This date, associated with the liberation of Minsk from Nazi invaders in 1944, is of lasting importance not only for Belarusians, but also for Russians. Fighting shoulder to shoulder, our fraternal peoples made a decisive contribution to the Victory over Nazism. It is important that today the citizens of Russia and Belarus maintain and strengthen the bonds of friendship and mutual assistance. Developing relations of strategic partnership and alliance, our countries together overcome serious trials and defend their interests on the world stage. I am sure that by joint efforts we will continue to build up constructive bilateral ties and improve institutions of the Union State while promoting integration processes within the Eurasian space. This, of course, meets the fundamental interests of Russians and Belarusians,” Russian President Vladimir Putin said in his congratulatory message.

The Russian leader wished Aleksandr Lukashenko strong health and success, and well-being and prosperity to the people of Belarus.

Russian Prime Minister Mikhail Mishustin, Chairperson of the Federation Council Valentina Matviyenko, Chairman of the State Duma Vyacheslav Volodin, and Patriarch of Moscow and All Russia Kirill, alongside leaders of many Russian regions, also extended their greetings to Aleksandr Lukashenko.

President of the People’s Republic of China Xi Jinping addressed sincere congratulations and best wishes both personally to the Head of State and to the friendly people of Belarus, wishing happiness and well-being, and the country – power and prosperity. “In recent years, Belarus has made notable progress in protecting national stability and promoting economic development. China will continue to support Belarus in following a development path in line with its own national conditions and is ready to continue to provide all possible assistance to the socio-economic development of Belarus. I attach great importance to the development of Chinese-Belarusian relations, and I am ready to make efforts together with you to use the 30th anniversary of the establishment of diplomatic relations between the two countries as an opportunity to take Chinese-Belarusian relations and interaction across various fields to a new level for the benefit of the two countries and their peoples,” reads the congratulatory message.

Turkish President Recep Tayyip Erdogan also noted that this year the countries celebrate the 30th anniversary of the establishment of diplomatic relations. “I express satisfaction with the level achieved during this period in our relations, which are based on mutual respect and mutual interests,” the Turkish leader said, wishing the friendly people of Belarus peace, well-being and prosperity.

“Relying on the historically established strong ties of friendship and mutual support of our fraternal peoples, Azerbaijan attaches great importance to further strengthening of interstate ties with Belarus. Close liaisons between our countries on a bilateral basis are of particular importance. I am convinced that through joint efforts the Azerbaijani-Belarusian multifaceted collaboration will continue to develop progressively for the benefit of our nations and countries,” President of Azerbaijan Ilham Aliyev said in his congratulatory message.

The congratulatory message of the Kazakh leader notes the development of a fruitful dialogue and mutually beneficial co-operation between the two countries. “I am convinced that our joint efficient work will continue to contribute to the expansion of multifaceted ties and the implementation of the existing economic potential, including within the framework of regional integration associations,” President of Kazakhstan Kassym-Jomart Tokayev said.

Congratulations were also received from the first president of Kazakhstan, Nursultan Nazarbayev, who noted that Belarus had made great strides in building a strong and efficient state.

President of Uzbekistan Shavkat Mirziyoyev stressed that over the past period, under the leadership of the President of Belarus, great success has been achieved in the field of state and public construction. “I would like to note with pleasure the dynamic development of Uzbek-Belarusian multifaceted relations. In recent years, the volume of mutual trade and investment has grown significantly, a number of industrial co-operation projects have been implemented, interregional contacts, scientific and technical ties, as well as cultural and humanitarian exchange have intensified. I am convinced that effective use of the full potential of our partnership will bring bilateral interaction to an even higher level,” the Uzbek leader said in his congratulatory message.

Shavkat Mirziyoyev also noted that he would be glad to meet personally with Aleksandr Lukashenko in Samarkand as part of the upcoming summit of the Shanghai Co-operation Organisation.

President of Tajikistan Emomali Rahmon underlined that allied relations with friendly Belarus occupy a priority place in the foreign policy of this country, “I’m pleased to note that the time-tested relations of friendship and collaboration between our countries – based on strong historical traditions and principles of strategic partnership – tend to develop steadily. I express my confidence that by joint efforts we will continue to strengthen our relations, making full use of their enormous potential.” He wished the President of Belarus further success in all endeavours, and the fraternal people of Belarus – a peaceful sky, well-being and further prosperity.

President of India Ram Nath Kovind also congratulated Aleksandr Lukashenko and the friendly people of Belarus on Independence Day, “Traditionally warm relations are maintained between our countries. This year, we celebrate the 30th anniversary of our diplomatic ties. This year is also special for India, as we celebrate 75th anniversary of our independence. I am convinced that our bilateral relations will continue to strengthen and expand.”

Pakistani President Arif Alvi emphasised that Pakistan and Belarus maintain close and cordial relations based on mutual respect, understanding and close liaisons, “Our bilateral relations have witnessed impressive progress and diversification across numerous areas of co-operation. The Government of Pakistan looks forward to working together with the Government of the Republic of Belarus in order to take this mutually beneficial collaboration to new heights in the coming years.”

“It is symbolic that this holiday bears the memory of the liberation of the city of Minsk from the fascist invaders, of the Great Victory, which the peoples of our countries won together. I am sure that by joint efforts we will ensure the further expansion of the entire range of friendly Kyrgyz-Belarusian relations both at the bilateral level and within the framework of common regional integration associations, for the benefit and in the interests of the peoples of our countries,” reads the message of the President of Kyrgyzstan Sadyr Japarov.

Serbian President Aleksandar Vucic expressed his conviction that relations with Belarus would continue to develop on the basis of mutual understanding and respect for the benefit of the two states and peoples. “I would like to repeat my gratitude for the consistent support that the Republic of Belarus provides in the issue of preserving the territorial integrity of the Republic of Serbia,” the Serbian leader said in his congratulatory message.

Patriarch of Moscow and All Russia Kirill noted the joy of the fact that the most important values underlying the current social life of Belarus are commitment to Christian ideals and readiness to work together to create a worthy future. He wished Aleksandr Lukashenko good health and God’s generous help in his responsible presidential work, and the people of Belarus – peace and prosperity.

Pope Francis conveyed the wishes of harmony and prosperity to Belarus, “I ask the Lord that the Belarusians, guided by the values of the Gospel, always contemplate each other as a brother who has been given to us. As long as the sounds of weapons are heard, let your country and its leaders serve brotherhood and peace in this region of the planet. I invoke divine blessings upon Your Excellency, the heads of state affairs and all your fellow citizens.”

Independence Day greetings were also received from Secretary General of the Shanghai Co-operation Organisation Zhang Ming, “Today Belarus is a sovereign state that pursues an independent and peaceful foreign policy, actively developing co-operation with foreign partners in different parts of the world and making a significant contribution to strengthening international security and stability. The Republic of Belarus has been an integral part of the SCO family for more than twelve years, taking an active part in its events and making its worthy contribution to the development of the organisation.”

President of Turkmenistan Serdar Berdimuhamedov emphasised in his congratulatory message to the Belarusian Head of State that friendly relations between the two countries – based on the principles of mutual understanding, equality and trust – would continue to develop dynamically for the sake of a brighter future for the peoples. He wished peace, well-being and prosperity to the friendly people of Belarus.

Syrian President Bashar al-Assad expressed satisfaction with the achieved high level of friendly relations and fruitful co-operation between the countries. “On behalf of the Syrian people, I thank you for your country supporting Syria during the terrorist war and blockade it is facing,” the Syrian leader said in a message.

Vietnamese President Nguyen Xuan Phuc stressed in his congratulatory message that Belarus continues to achieve many successes in its development. He also noted that this year the countries celebrate the 30th anniversary of the establishment of diplomatic relations, “Recently, the co-operation relations between the two countries across various fields have become more and more effective, making a positive contribution to the construction and development of each country. With the determination of leaders and peoples of the two countries, I am convinced that the relations of traditional friendship and multilateral interaction between Vietnam and Belarus will continue to deepen.”

King of Thailand Maha Vajiralongkorn conveyed sincere congratulations to Aleksandr Lukashenko, wishing further development and prosperity to Belarus and its people, “I am sure that Thailand and the Republic of Belarus will continue close liaisons in order to further strengthen and develop the ties of friendship and collaboration between our two countries in the coming years.”

On behalf of the people of Singapore, President Halimah Yacob conveyed heartfelt congratulations and best wishes for further peace, progress and happiness to Belarus and its people.

President of Zimbabwe Emmerson Mnangagwa, in his Independence Day greeting, expressed sincere hope that in the coming year the governments of the two countries would find additional sectors of the national economies, on the basis of which Belarus and Zimbabwe would expand and deepen bilateral relations for the benefit of the peoples.

President of Kenya Uhuru Kenyatta also sent congratulations, reading, “I note with satisfaction that Kenya and Belarus have a long history of warm and cordial relations. These strong ties are reflected in close co-operation in the areas of agriculture, trade and investment, healthcare and education.”

Congratulations to the President and the Belarusian people continue to arrive.