Calls to isolate Belarus, to cover the country and its people with a cap of sanctions and destroy it are not new, including in the sporting world. Recently, this vector has been developing more and more actively, more impudently and more shamelessly. Let us recall the ultimatums of the International Olympic Committee, the shameful deprivation of Minsk of the legal right to host several international tournaments, including the World Ice Hockey Championships and the dirty political provocations at the hockey forum in Riga, where our national flag was lowered, as well as attempts to compromise our delegation at the 2020 Games in Tokyo... A once honest world, revived by Pierre de Coubertin, becomes a disgusting slaughterhouse without any rules, where sadistic techniques are not prohibited, but are introduced into the cult and are encouraged. There are no principles here, let alone justice. 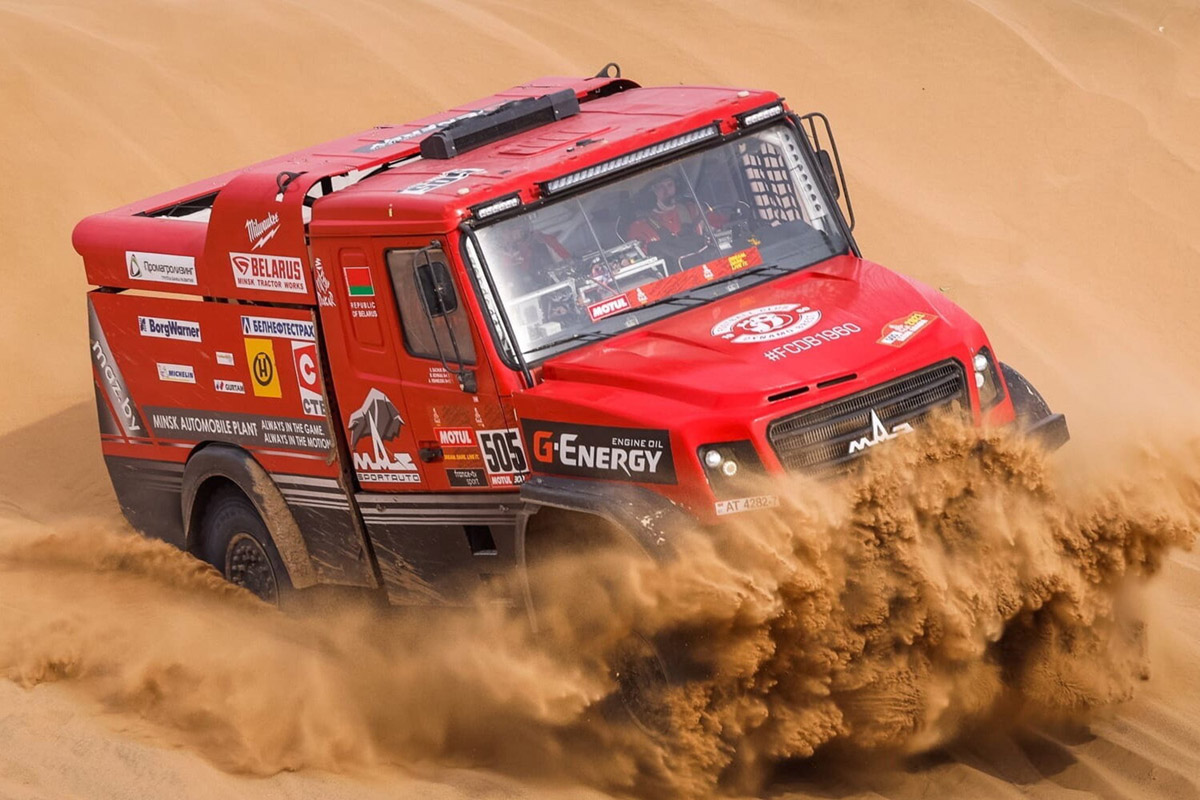 The Dakar Rally has long been a brand event in the world of auto racing. In fact, this is Formula 1 for rally drivers: the elite pool of the automotive world. The additional weight given to the race is added to by the fact that this is not just a competition of pilots, motorcycles or trucks, but a large competitive contest of the world’s leading automobile industries, veiled under a colourful show. The racing conditions and the structure of the track are so difficult that the Dakar is a survival sport, which has almost cosmic technology. It is all the more pleasant to note that Belarus in this crazy race of technologies has always been at the forefront and boldly swung to the championship title. Our MAZ vehicles are not afraid of dirt and sand, having proven to be reliable, fast, powerful and safe over the years while our racers are virtuosos and professionals.
Last year, the crew of the Belarusian MAZ-SPORTauto team led by Siarhei Viazovich took third place in the Dakar’s final standings of trucks, losing only to two Russian KAMAZ trucks. Every year, our trucks have consistently been among the leaders. In terms of reliability and equipment, MAZ vehicles today are one of the most promising vehicles, as seen by the whole world. Our team took part in the rally nine times, and the new event was supposed to be an anniversary one. The athletes and the management of the plant had serious plans for the current Dakar. The level to which the Belarusian team has risen enabled them to talk about the most ambitious task. Our experienced pilot, a participant of all nine Belarusian Dakar raids, Aleksandr Vasilevsky, voiced them quite specifically, “We already have a second place at the Dakar, and we have been third too. It remains now only to add gold to this collection. I think MAZ can win.” But, alas, there will be no victory because the barrier was brazenly lowered in front of our athletes and they were not allowed to go the distance.
Just last week, A.S.O. (the organiser of the Dakar rally-marathon) officially announced that the Belarusian team MAZ-SPORT-auto will not be able to take part in the race in 2022 and this decision is related to the sanctions imposed on the Minsk Automobile Works (MAZ). In a statement to the Championat portal, the organisers stressed that they had to remove the MAZ crews from the starting list by the decision of the French authorities (A.S.O. is based in France). “Due to the measures taken by the European Union and affecting various Belarusian legal entities, including the car manufacturer MAZ, the French authorities informed the organisers of the Dakar that it is legally impossible for MAZ to take part in the 2022 race. The organisers of the Dakar were forced to inform MAZ about this decision,” the A.S.O. press service told the Championat correspondent.

The very fact of this decision is surprising, as well as the way the representatives of MAZ-SPORTauto were informed of it. Minsk did not receive any notifications and our trucks went to Marseille on time to cross by ferry to their destination. However, the crew was not allowed to load.

Without explaining anything or presenting facts or any documents. Everything is as always: in the best traditions of the triumph of lawlessness, imposed on the world as the most correct law.
At a press conference, the head of our team, Siarhei Viazovich, described what happened, "We are very upset about this. For us, what happened was a complete surprise."
The team continues negotiations with the organisers to find a way out of this situation.Siarhei Viazovich has no doubts that A.S.O. did not make such a decision on its own. The pressure exerted on the organisers of the race forced them to take this step, which once again proves that sport does not remain outside politics.
It is not hard to guess that the red light for Belarusian trucks in front of the Dakar is not just an accident, but another hard and dastardly blow. What does the rally and the athletes have to do with the sanctions against the plant? Everything is very simple: to eliminate rivals in the world car market and on the race track.

Are they tired of seeing Belarusians among winners and awardees? Can’t overtake? Then they decide that it is better just to break and to destroy!

Why would anyone know that Belarusian MAZ vehicles are more reliable and cheaper than other world analogues?


Scoring an own goal

In their desire to annoy Belarus, western democracies have long been happy not to shy away from openly underhand methods. However, what happened in the Czech Republic looks almost like legalised state terrorism, like a scene from Franz Kafka’s surreal novel. The Head of the Belarusian Football Federation (ABFF), Vladimir Bazanov, who arrived in the Czech Republic as part of an official delegation for the qualifying match for the Women’s World Cup 2023, was detained in police custody for a day. Even those who arrested him cannot say what exactly the official is charged with: either illegal stay on the territory of the Czech Republic, or violation of sanitary measures.

ABFF and UEFA immediately contacted the Czech Football Association regarding this incident. It is interesting that the head of the ABFF was detained ‘during a routine inspection at the place of residence’. The case is clearly a bit too thin; even COVID, which is always convenient in such situations, was added. Why then did they not arrest the entire national team of Belarus with coaches and service personnel? After all, they are in the Czech Republic on the same terms. Although not everything turned out well for the team: the game didn’t take place being postponed due to the positive results of coronavirus tests among several players of our national team. It is noteworthy that a week ago, everyone left Minsk vigorous and healthy. In Cyprus, where they played before that, the tests were also negative. It’s clear that the disease could be caught anywhere, but all these coincidences of circumstances look painfully strange.

The Ministry of Foreign Affairs of Belarus demanded appropriate explanations from the Czech side.

They break futures like matches, they don’t care about anything except their own benefit. One cannot help but recall another French incident: in spring 2016, just a couple of months before the Olympics, the local police detained the Belarusian rowers at the training camp in Angers as criminals and terrorists. There were also commands to get ‘face down on the floor’, and the use of force, night interrogations and a total search, which looked more like a gangster scam, as well as the threat of criminal cases. They looked for doping, but, of course, found nothing. Nevertheless, no one apologised, and while the proceedings were underway, the entire men’s team was removed from participation in the 2016 Games.
On what grounds? Because there was an order to do it. How do you not lose faith in humanity and justice after that? How do you live if the Olympics is what you have been aiming for your entire long career?

Recent world sports events leave no doubt that there is a purposeful hunt for Belarusian-Russian sports, our coaches, athletes and the entire system as a whole. This is cynical persecution, boorish destruction, shameless ostracism, the purpose of which is to deprive obstinate countries of their state symbols, depersonalise them and leave them without a national anthem and a flag.

All this unprecedented sports terrorism is served under the cover of a sacred concern for the pure ideals of Olympism.


“We would like to support MAZ-SPORTauto in their aspiration to become participants in the upcoming 2022 Dakar Rally. Politics should not influence sport in any way. Guys, we are with you! #MAZ4DKR2022,” wrote the Czech racer, multiple participant of the Dakar rally-marathon, winner of the Silk Way Rally, Aleš Loprais, on his Instagram account.