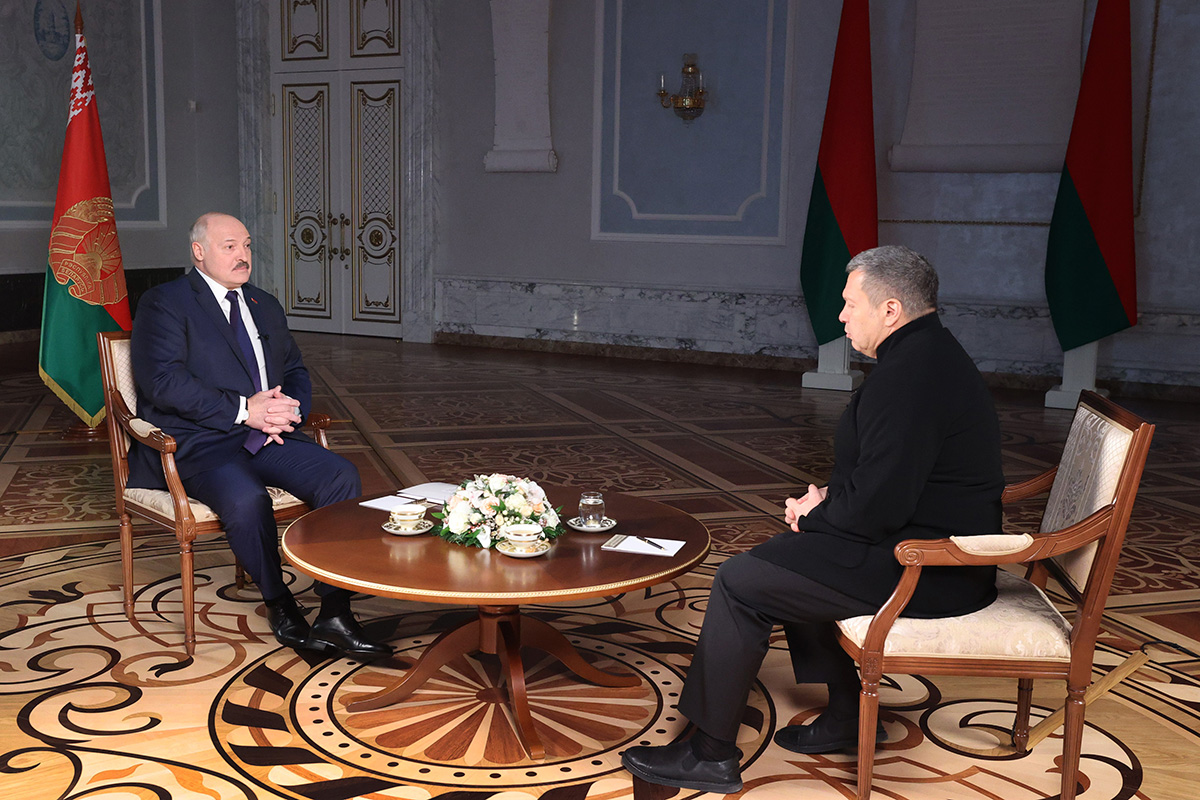 “This has not happened before! Sharp questions, unexpected answers, and exclusive statements,” the journalist of the All-Russian State Television and Radio Broadcasting Company, a well-known radio and TV presenter, left a comment on his telegram channel.
What is Fatherland from Minsk to Vladivostok? Comparison with the creator of the Singapore ‘economic miracle’ Lee Kuan Yew. On traitors. The hottest topics and events of August 2020... These and other topics were discussed during the conversation.

The events of 2020 were given special attention. Vladimir Soloviev emphasised, “For me, there was a critical moment, such a fundamental one, including a change in my personal attitude towards you, when you flew in with a gun. I realised that you were definitely not like Yanukovych...”
Aleksandr Lukashenko immediately shared his perspective, “Yanukovych and I are a big difference. He had a lot of money. You see, money always prevails. They make your pocket heavy, and you need to save money.”
“Well, how can we talk about money? I think when you came out with an assault rifle, it became clear that you were ready to die, but not to leave, not to run away, not to surrender,” continued Vladimir Soloviev.


The President shared the details of that difficult, but, now quite obviously, turning-point day, “The organisers of the riots were spreading this fake that I fled like Yanukovych, that I was already in Rostov, that the children have flown away. I took the rifle, put on a bulletproof vest, I even forgot to put on a helmet. I didn’t know this would happen. Nobody trembled. I knew how our law enforcement guys operate. They did everything I told them. But I had to show them that I hadn’t run away, that I was there. And my children too. I got into the helicopter and just a few minutes later landed there with the assault rifle.”


The Head of State drew attention to the fact that the residence of the President, as well as the place where he lives, are always coveted for ‘any bastard’ during such periods, “They were planning an attack on the residence. I assumed that was possible. They were planning to storm the Palace of Independence. This was a big risk. They knew they crossed the line.”


About madmen and wars 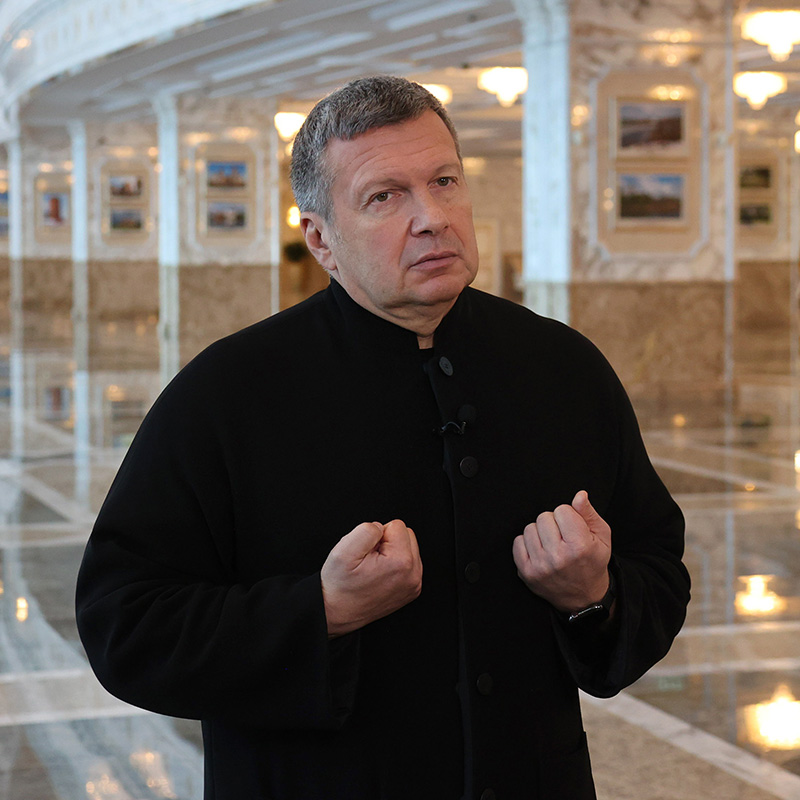 Vladimir Soloviev
When answering the interviewer’s questions Aleksandr Lukashenko expressed the following assumption: if NATO invaded Belarus, there would be a third world war.
Vladimir Soloviev asked the Head of State about the events of August 2020, when the President visited the Gozha training ground located near the border with Poland. Before the elections, NATO had just begun to concentrate its forces not far from the Belarusian borders.
“You were ready for a war on the border with Poland because ...” started the journalist.
“More than ready,” emphasised Aleksandr Lukashenko and recalled that one of the protesters’ plans was to shake up the situation inside the country and appeal to NATO with a request to send troops to resolve the conflict.
“NATO would be invited literally for a moment. And imagine the situation: they invited NATO here, and what? Then there would be a war,” said the Head of State.
“World War III,” continued the presenter.
“Yes,” the Belarusian leader supported his opinion.
During the interview, the Head of State also revealed some details of his talks with former US Secretary of State Michael Pompeo, who visited Belarus in early 2020. According to the President, during the meeting, among other things, the US policy towards China and Russia were discussed.
“When Pompeo came here, we sat in his office. I asked him several questions in a row. I say, “Are you mad? Tell your Trump you are madmen.” He looks at me, “What do you mean?” “Why did you unite the most powerful nuclear country with huge military potential with the greatest economic power and are trying to wage war against this union? You will never win. Why are you fools doing this?” I told him about it. He said, “China is stealing technology. We will stop them.” I said, “Too late. I know China better than you do. It’s too late. Nobody will stop China today. They will manage even without your technologies,” Aleksandr Lukashenko said about that meeting.


The country was created by the people

Vladimir Soloviev also asked Aleksandr Lukashenko about how he feels: as the President of Belarus, the father of the Belarusian people, the creator of the modern Belarusian state, or a dictator?

The Head of State replied, “A human... I don’t consider myself the creator. Together with my colleagues who worked with me at different times, I created this sovereign, independent state for the first time (Vladimir Rudolfovich, you know history well) in the history of Belarus. I think so. This is the main thing that my generation, not just me, did.”

“So this is like your baby,” said the journalist.
“This is my Fatherland, I have nothing else besides this.”