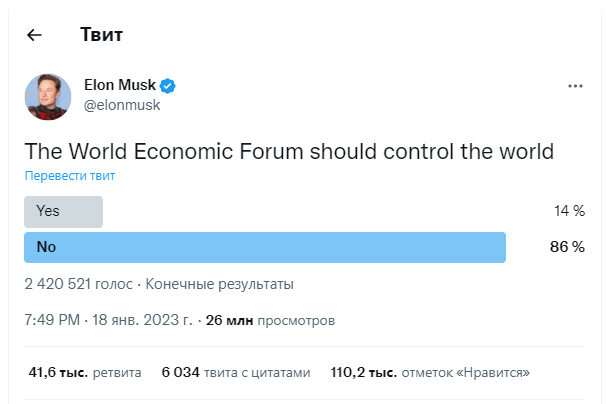 Billionaire Elon Musk is not a fan of the World Economic Forum and he is making it very clear to the uninitiated. The Tesla CEO has unleashed a torrent of criticism against the annual gathering of political and business leaders, seemingly determined to shake things up.
Musk expressed his disdain for environmental, social governance, or ESG, saying that ‘S’ should stand for satanic instead of social. The Tesla founder also scoffed at the idea of the WEF being ‘the boss of Earth’ and called the gathering boring.
He further insulted the forum, comparing it to online message board 4Chan, which is well known for spawning baseless conspiracy theories. Musk didn’t stop there and conducted a poll on Twitter, asking his millions of followers whether WEF should control the world. All this clearly showed his disappointment with the conference and this has been for years.