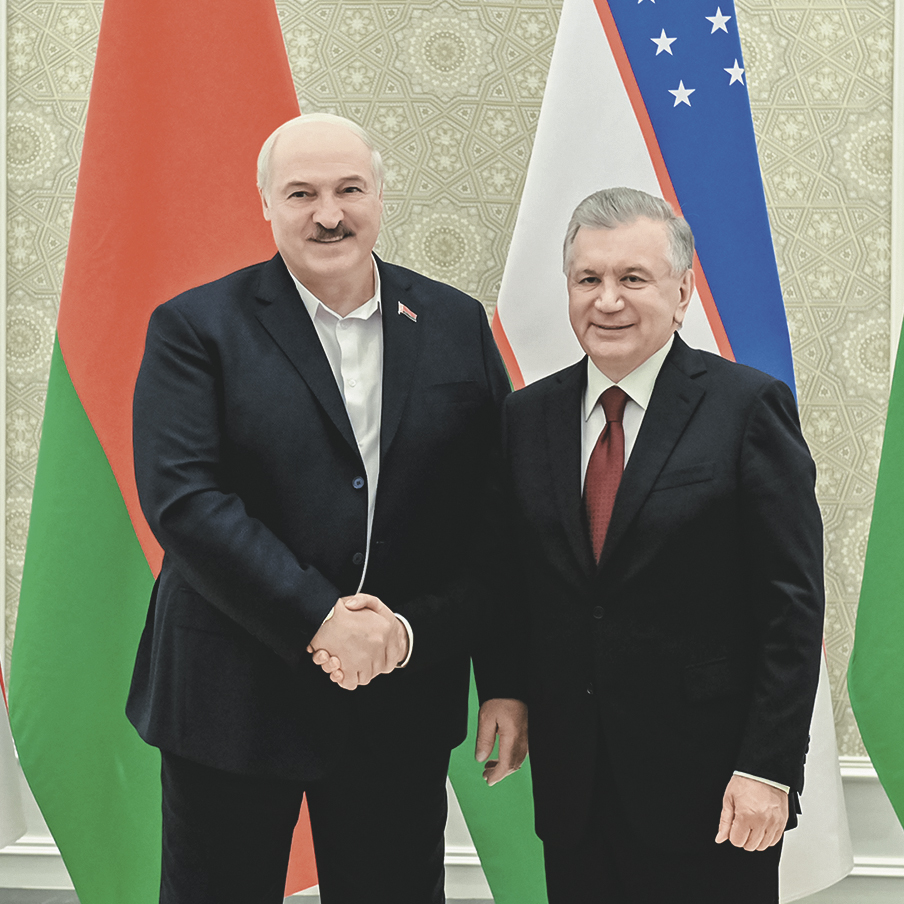 Upon arrival in Samarkand, a brief business conversation took place with Uzbekistan Prime Minister Abdulla Aripov. After that, Aleksandr Lukashenko held talks with the host of the summit, Uzbekistan President Shavkat Mirziyoyev.
The heads of state warmly greeted each other. Virtually the entire meeting proceeded without mass media. Shavkat Mirziyoyev stressed he was glad to meet with Aleksandr Lukashenko in the ancient yet ever young Samarkand, “I am very pleased you have accepted the invitation and have flown here for a session of the Shanghai Co-operation Organisation. A lot has been accomplished. Sincerely speaking, it’s been difficult but we’ve endured everything and have done it impeccably. I am also grateful to your colleagues who supported everything.”
The meeting between the presidents of Belarus and Uzbekistan was held amid a positive trend: the trade turnover between the two countries is growing steadily. For example, it increased by half in January-July 2022, compared to the same period last year.
At a meeting with Secretary General of the Shanghai Co-operation Organisation Zhang Ming, the Belarusian Head of State noted that the authority and influence of the SCO on the world stage is growing. Aleksandr Lukashenko noted that Belarus has been co-operating with the SCO for 12 years, 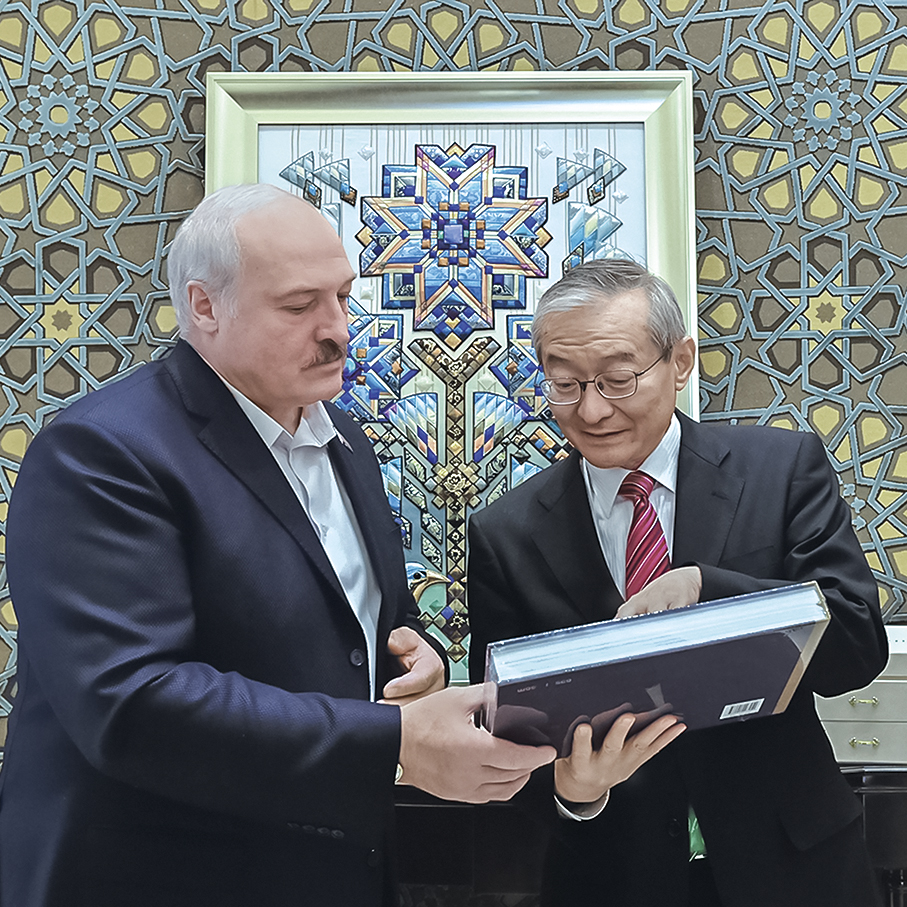 “Our step to join ‘the Shanghai family’ as an observer was neither spontaneous nor accidental. Back then the Shanghai Co-operation Organisation was rather young and was trying to become part of the world order. It was not so back in the day. But back then we made up our minds in favour of advancing co-operation with the Shanghai Co-operation Organisation. Our political and economic future, possibly the military political future lie there.”
The President held his next meeting with Pakistan Prime Minister Shehbaz Sharif. The leaders of the countries communicated like old acquaintances, despite the fact that they met for the first time. There was a benevolent and friendly atmosphere from the first minutes of the conversation.
“Mister President, it is a great honour and a pleasure to meet with you. We’ve brought you the best wishes from the people of Pakistan. Both our delegation and our government know you’ve been a friend of our country for a long time,” the Prime Minister of Pakistan welcomed the Belarusian leader.
“Mister Prime Minister, I am pleased to hear you say we are good friends of Pakistan. It is truly so,” emphasised Aleksandr Lukashenko. 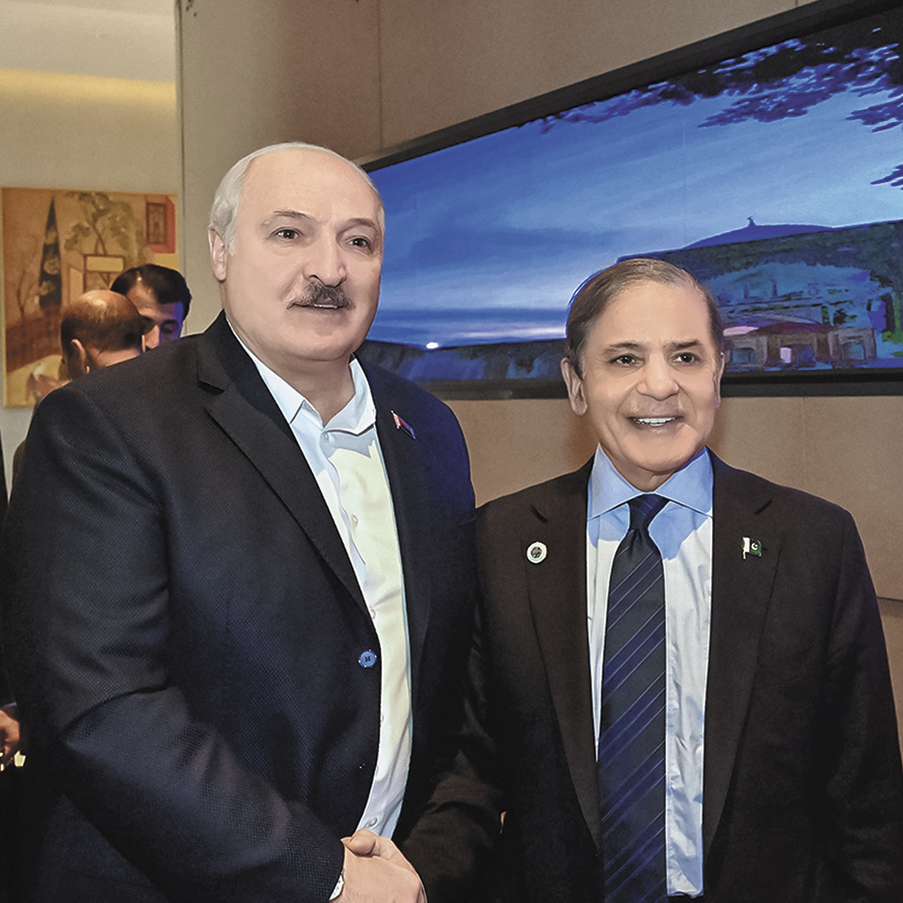 The Prime Minister thanked the President for an invitation to visit Belarus, “I am truly glad you’ve invited me. Let me use the opportunity to invite you to visit Pakistan as soon as possible.”
Many important topics were discussed at Aleksandr Lukashenko’s meeting with China President Xi Jinping. The leaders of the two states have come to an agreement on a historic upgrade of co-operation to a new level.
“Dear President Lukashenko, my good friend, I am very glad to meet with you. It is our first face-to-face meeting since the pandemic began.
A meeting of old friends is always warm. Our bilateral relations have been incessantly advancing over the 30 years of China-Belarus diplomatic relations.
The reached agreements are being effectively realised, all-round co-operation of the two countries is characterised by strength and resilience,” said Xi Jinping.
China President also thanked the Head of the Belarusian State for the special attention to Chinese-Belarusian relations. 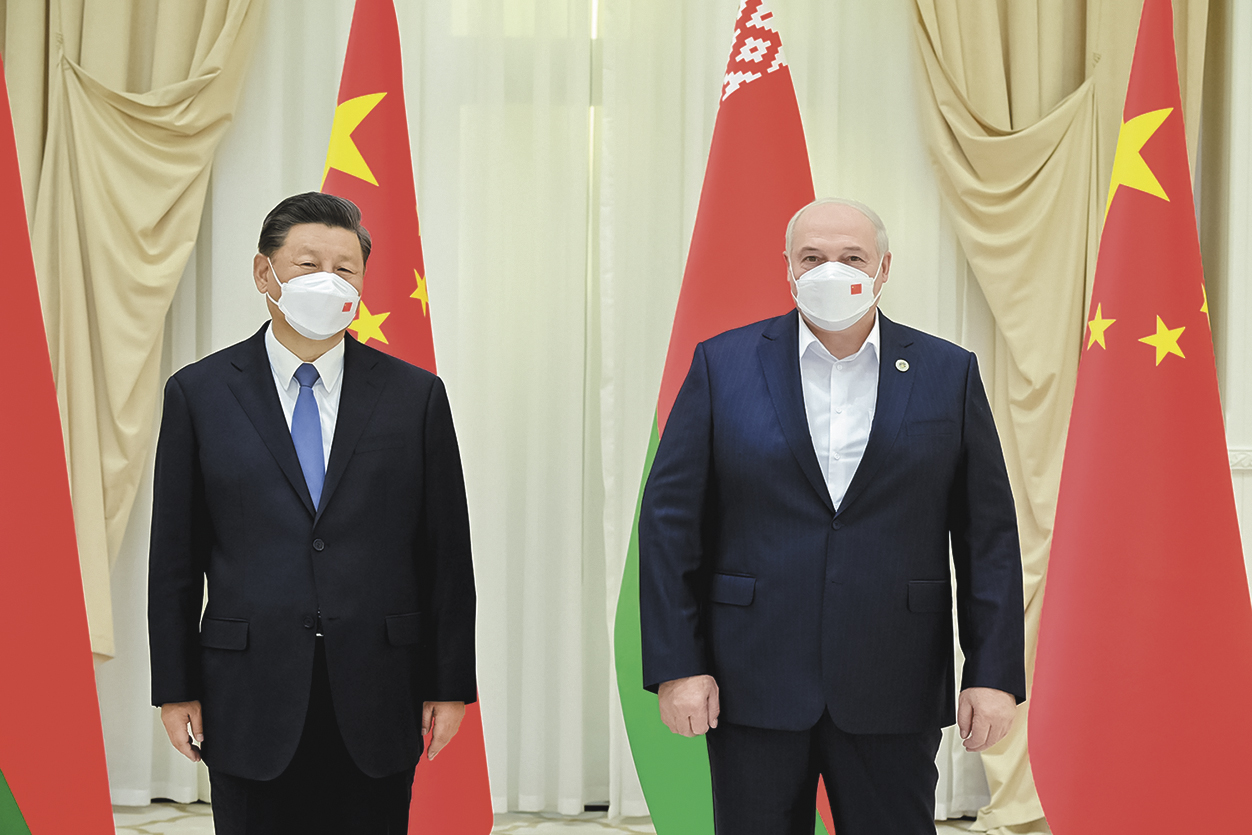 Aleksandr Lukashenko assured his Chinese colleague of the reliability of Belarusian friendship, “Dear President, I thank you for the kind words you’ve just said. You have always been not simply a solid and reliable friend for us but a serious support in these complicated times. You know what those are as well as I do. I’d like to once again underline our determination to advance the relations. We have always supported China on all matters of principle. Such as economic growth, unity, integrity of China, the ‘One China’ policy. We’ve always been nearby on all matters. It will always be like that…
And such a not-insubstantial and reliable friend in Europe like Belarus will always be useful not only for the Shanghai organisation but also for China.”
Another bilateral talks were held with Iranian President Ebrahim Raisi. Aleksandr Lukashenko noted that the format of the meeting on the sidelines of a summit does not allow delving much deeper into the discussion of ways to promote the relations between Belarus and Iran. But this is an opportunity to agree on something in advance such as meetings and agenda, and to talk about some serious issues. 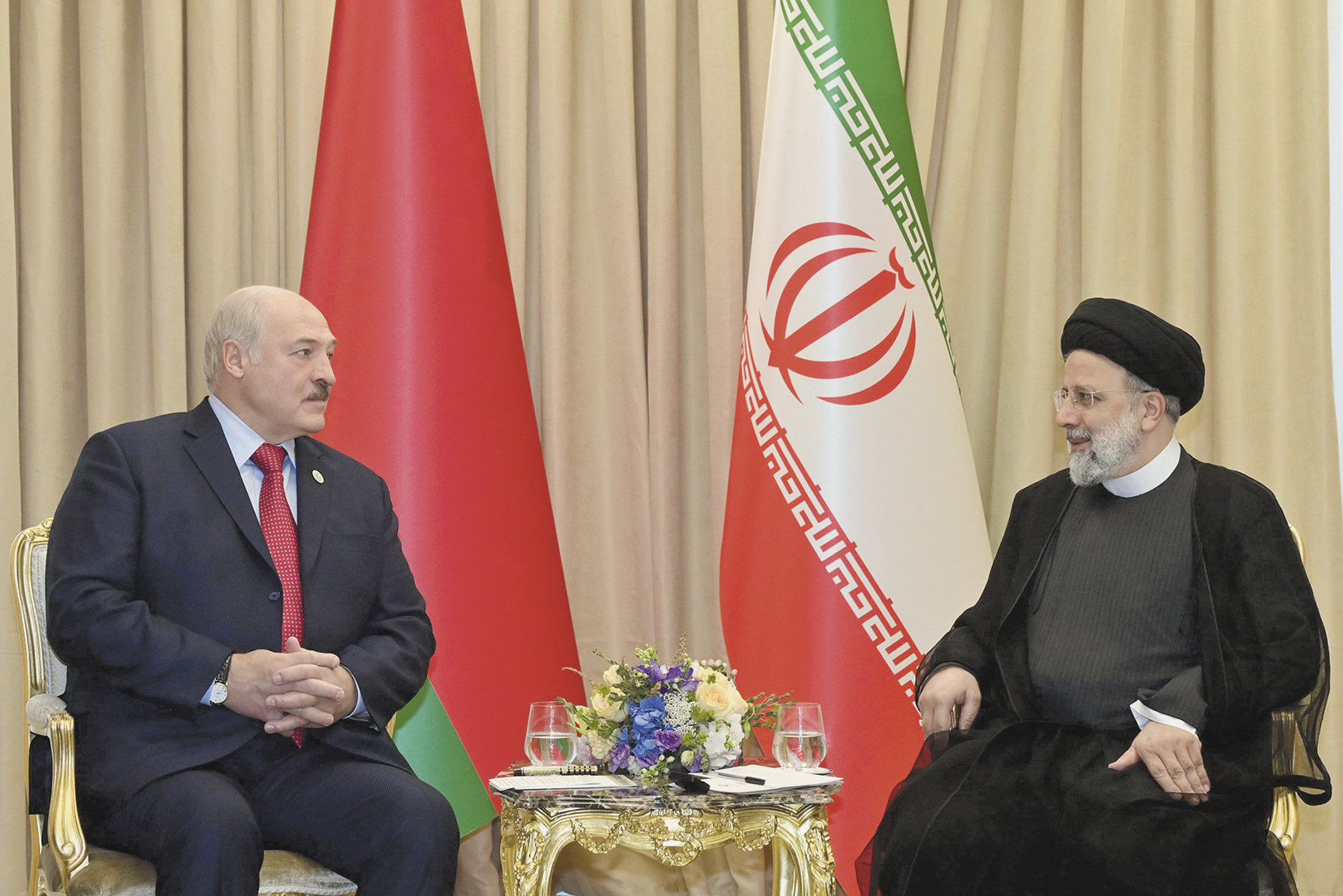 “This is very important. Here we have this opportunity… We need to stick together in order not just to survive but to take our place under the sun,” said the Head of State.
According to the Belarusian leader, the parties have already developed good relations but they need to be intensified, “We need to outline the areas in which we will build relations in the future between Iran and Belarus. To do this, our experts, ministers and foreign ministries must take stock of the issues on which we once tried to reach an agreement and on which we are working now, discard what is already outdated and keep working on the issues that hold promise and that will help us to take our relations further.”

Belarus and China have established all-weather and all-round strategic partnership
The corresponding joint declaration was accepted in Samarkand.
“The Chinese side highly appreciates the progress made in the development of the Republic of Belarus, supports the efforts of the Belarusian side aimed at ensuring socio-political stability and economic development, notes the free expression of the will of the Belarusian people to amend and supplement the Constitution of the Republic of Belarus during the nationwide referendum on February 27th, 2022, and speaks against external interference in the internal affairs of Belarus under any pretext. In turn, the Belarusian side reiterates its adherence to the ‘One China’ principle, recognises that the government of the People’s Republic of China is the only legitimate government representing the whole of China, and Taiwan is an integral part of China’s territory, opposes ‘Taiwan independence’ in all its manifestations, supports all efforts made by the Chinese government for the reunification of the country,”  the document reads.
Raising investments, the development of traditional and innovative Chinese medicine and pharmaceutics have been identified as the driving force of future development of the China-Belarus Great Stone Industrial Park.
Belarus and China stand ready to advance co-operation within the framework of the digital Silk Road. The two countries have agreed to use Belarusian transit potential by expanding co-operation in transportation and logistics. “The two countries will ensure safe and uninterrupted movement of trains between China and Europe, will optimise transhipment, and will increase the effectiveness of customs clearance in key railway ports,” the document notes. Apart from that, Belarus and China are in favour of expanding the geography and offering more flights between countries.

Based on materials of sb.by and belta.by
Photos by BELTA
Lukashenko meetings Co-operation SCO