In the second match of the final series of the 15th tournament, the team of the Head of State beat the Minsk Region team with a score of 5:1 (1:1, 1:0, 3:0). Earlier in the first game, the President’s Team won with a score of 6:1.
The first period of the final meeting on the ice of the Minsk Olympic Arena turned out to be extremely tough — the score was opened only in the 10th minute of the game, when Vyacheslav Morshenok hit the gates of the President’s Team. The guests were ahead for a very short time — in less than a minute and a half, Mikhail Grabovski scored the equaliser. After the first break, none of the opponents wanted to concede, there was a lot of power struggle on the court, and the judges had to send off violators of hockey rules more than once. 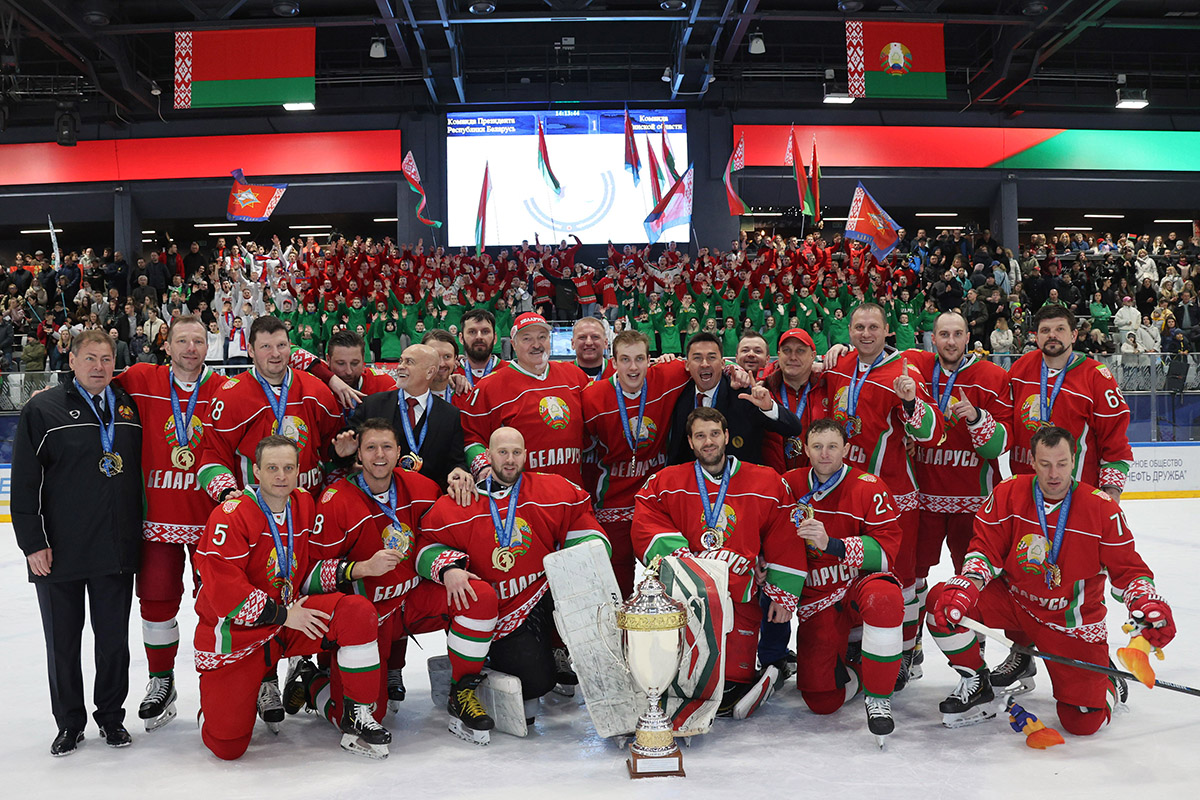 
As a result, in the second period, the visitors saw only one goal — in the very middle of the second period, Alexei Yefimenko managed to score the second goal against the Minsk Region team. In the final third of the match, the President’s Team stepped up their pressure and within 30 seconds Artyom Antonenko and Artem Karkotsky scored two goals in a row. A minute and a half before the end of the meeting, the guests were in the numerical majority, and even substituted the goalkeeper with the sixth skater, but still could not save the game. Moreover, Nikolai Lukashenko managed to run away to an empty net and marked the end of this match. He was recognised as the best player of the final match together with the captain of the Minsk Region team Vitaly Klimenkov.
According to the results of the competition, the best players in their positions were: goalkeeper — Dmitry Filippovich (President’s Team), defender — Sergei Rabiza (Minsk Region team), centre — Oleg Antonenko (President’s Team). Oleg’s son, centre of the winning team Artyom Antonenko, scored 23 points (11 goals and 12 assists) and was the first in the race among the top scorers. Prizes were awarded to the laureates by Chairman of the Minsk City Executive Committee Vladimir Kukharev, Sports and Tourism Minister Sergey Kovalchuk and Head of the Presidential Sports Club of Belarus Dmitry Lukashenko.
As always, the fans were not left without gifts. Just after the game, they received dozens of toys from the players of the President’s Team. In addition, during the intermission, the most active fans took part in competitions right on the ice, the winners of which became the owners of prizes from the President’s Sports Club.
At the preliminary stage of the tournament, the ice team of the Head of State gained six victories in six matches and, having scored 12 points out of 12 possible, took first place. Hockey players of the Minsk Region finished second, the team of the Brest Region took the third place, and the strongest hockey players of the Gomel Region closed the quartet.