Until March 3rd, the newly opened exhibition building of the National Art Museum was closed for re-exposition. Some of the works that were shown to visitors during the first presentation of new projects came in the halls straight from the restoration workshops. To be more precise, from the museum’s restoration building at 25 Kirov Street, the opening of which Belarusian restorers have been dreaming of for years. Let us remember that experts moved there to ‘restore’ and return cultural heritage monuments to the national context in December.

Arkady Shpunt, the Head of the Department of Scientific and Restoration Workshops, does not hide the yearlong problems in the restoration industry. Firstly — lack of space, and secondly — lack of modern equipment. Both of these issues, albeit not immediately, but still managed to be a proof of museum attention and control by the state. Restorers occupied adapted premises, but there were no conditions corresponding to the specifics of the work for a long time.
Now Arkady Shpunt and his colleagues have 14 brand-new workshops at their disposal. 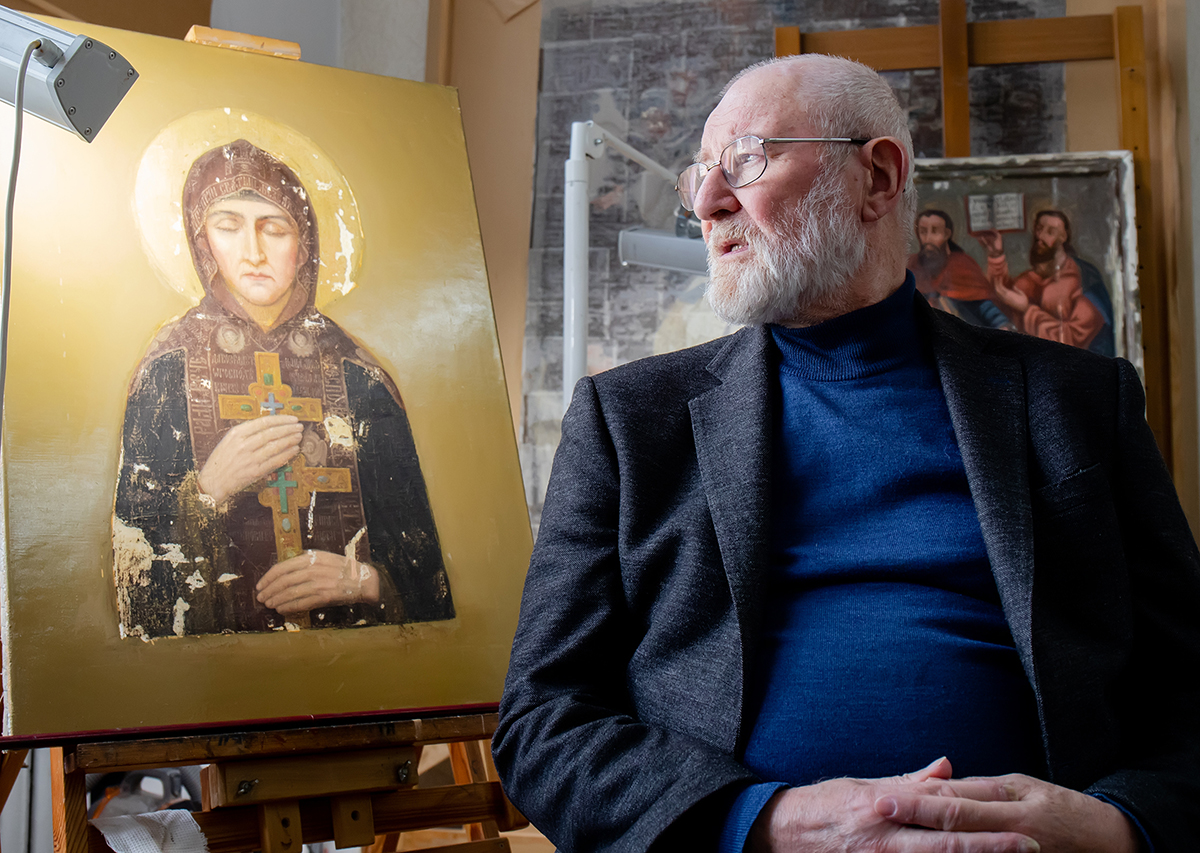 — Each specialist has his own workplace. In addition, this is an unimaginable luxury even for serious restoration establishments. Although, of course, we did not get an ideal space to just immediately enter and make something there. So for now, we’re just settling in here.
With the new premises, the area for restoration work has increased from 810 to 1398 sq. m. The workshops were divided as follows: four — for specialists in the restoration of oil painting, the same number — for restorers from the ancient Belarusian and decorative and applied arts departments. There are separate workshops for the restoration of items made of fabric, metal, wood, porcelain and ceramics. Rooms for varnishing and restoration of large-format paintings are intended for general use. Before restoration, the work must be photographed — for this purpose there is a laboratory on the second floor. Experts are guided on the photos taken there during their work.
The task is to reveal, preserve and convey the author’s intention as accurately as possible, without adding anything strange or of one’s own.
We are going on a tour of the new building with the artist-restorer Olga Mikhailova, a specialist in the field of tempera painting. Her workshop is located on the third floor — we’ll start with it. 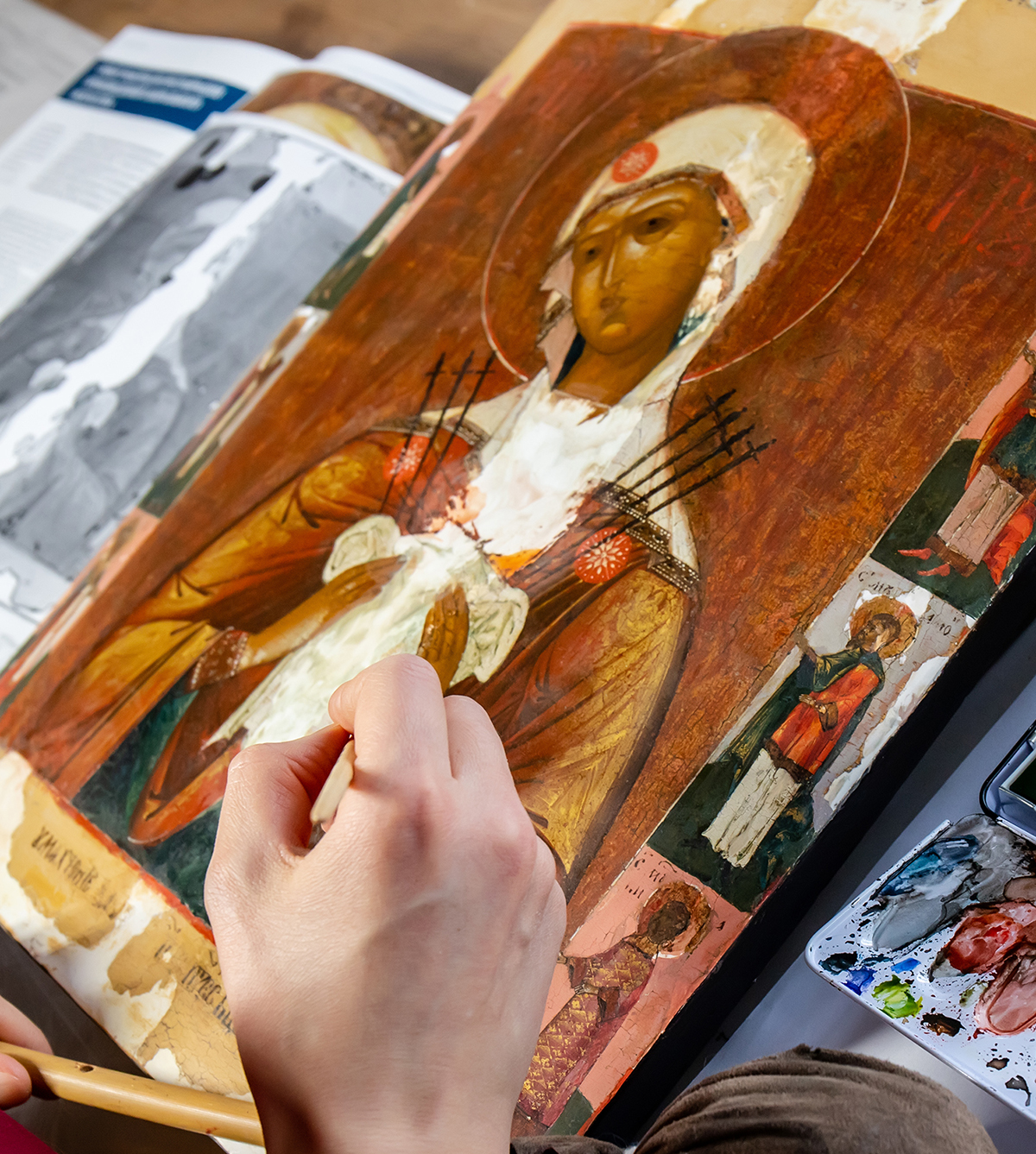 The restoration workshop is more like a doctor’s office according to the set of tools. Works of past centuries are restored with surgical precision by the staff of the department. The principal precept of work is the same as that of professional healers: do no harm.
Olga shows the icon of the Mother of God ‘Helper in Childbirth’. In the 1990s, its illegal removal abroad was prevented by Belarusian customs officers, and later the icon appeared in museum funds.
“It entered our department in an insufficient condition. It was necessary to prepare the icon for the exhibition, so the first thing we did was to strengthen the paint layer and primer, and made an X-ray and an infrared study. There were no changes in the pattern of the painting, so the painting was further uncovered,” Olga comments during the tour.
Two extraction systems assist her in working with solvents. Workshops are also equipped with humidity and temperature sensors.
— Relatively speaking, everything is provided. An important point: earlier, work with solvents had to be transferred to the second half of the day in order to breathe fewer chemicals. Now, thanks to powerful extraction systems, there are no more problems with this, the process of opening the painting can be safely performed at any time. 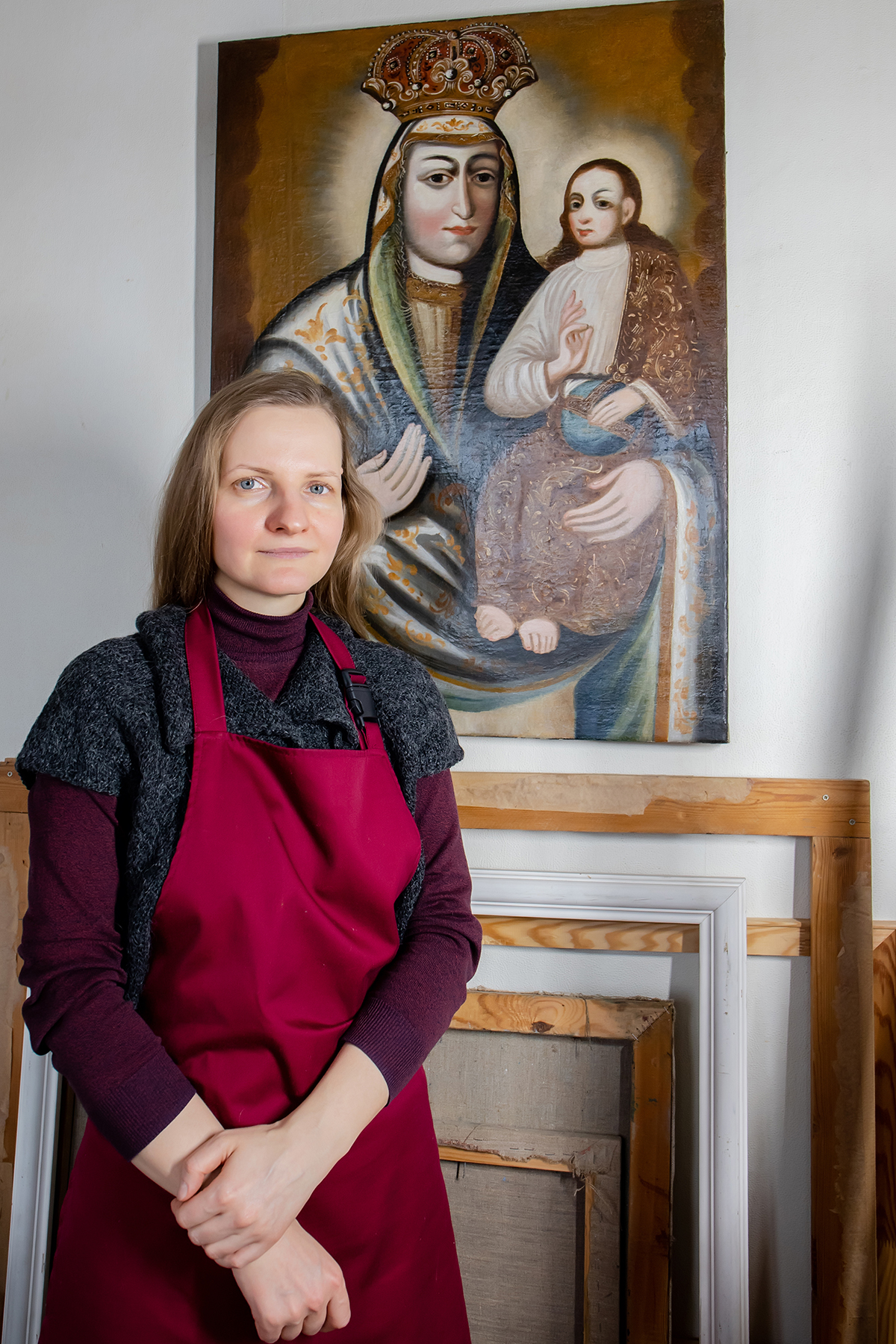 You will be surprised: the refrigerator and the sink area are also new. Olga confirms it with a nod: that is right. To get water, prepare a solution or wash tools, now one do not have to leave the workshop. By the way, there is no need to carry heavy paintings or large-scale canvases in hand: in every room, there are tables on wheels — the same ones are used in operating rooms.
With the opening of the restoration building, the museum library with a separate book depository and a reading room also occupied the new premises. In two rooms with a total area of 164 sq. m, there are 40,000 units of books and periodicals.
— If there is a need to move the work, for example, to the office of physical and chemical research, then I calmly carry it on this table. Consider this: there are no barriers and thresholds in the corridors, there are ramps everywhere for ease of transportation.
A museum depository is one floor above. There are not only those works that are waiting for restoration, but also ready for exhibiting. However, the allocation of additional space is not all that needs to be done to preserve the Belarusian restoration as an important area of the national museology, Arkady Shpunt believes, “Also, firstly, it is necessary to ensure an assessment of the professional level of restoration specialists and the development of a competent system for assigning them the appropriate categories. Such a system is successfully operating in all neighbouring countries. Secondly, it is important to work out and approve a strategy for the development of museum restoration in our country. Its goal should be 100 percent coverage of objects of the museum fund of the republic with restoration services. Thirdly, it is necessary to continue strengthening the physical and technological infrastructure of the workshops of the Art Museum, which employ the best and most trained specialists in the country. There is still a lack of expensive but necessary equipment: high-precision microscopes, laser scalpels, vacuum tables…”
All this will ultimately make it possible to preserve essential evidence of the life and work of our people for future generations.