Industrial co-operation, free trade, countering sanctions... What other important topics were raised by the President of Belarus at the meeting of the CIS Council of Heads of State.

Belarus ends its chairmanship in the Commonwealth of Independent States on the eve of the 30th anniversary of the organisation. The CIS celebrates this anniversary against the background of a special international situation when the main thing is to preserve unity. Aleksandr Lukashenko also reminded his colleagues of this, moderating the discussion as Chairman, “We need to intensify mutual trade and investment and to minimise artificial barriers. Only by combining efforts and increasing the role of the Commonwealth as a regional player will we be able to successfully counter all challenges and threats.” 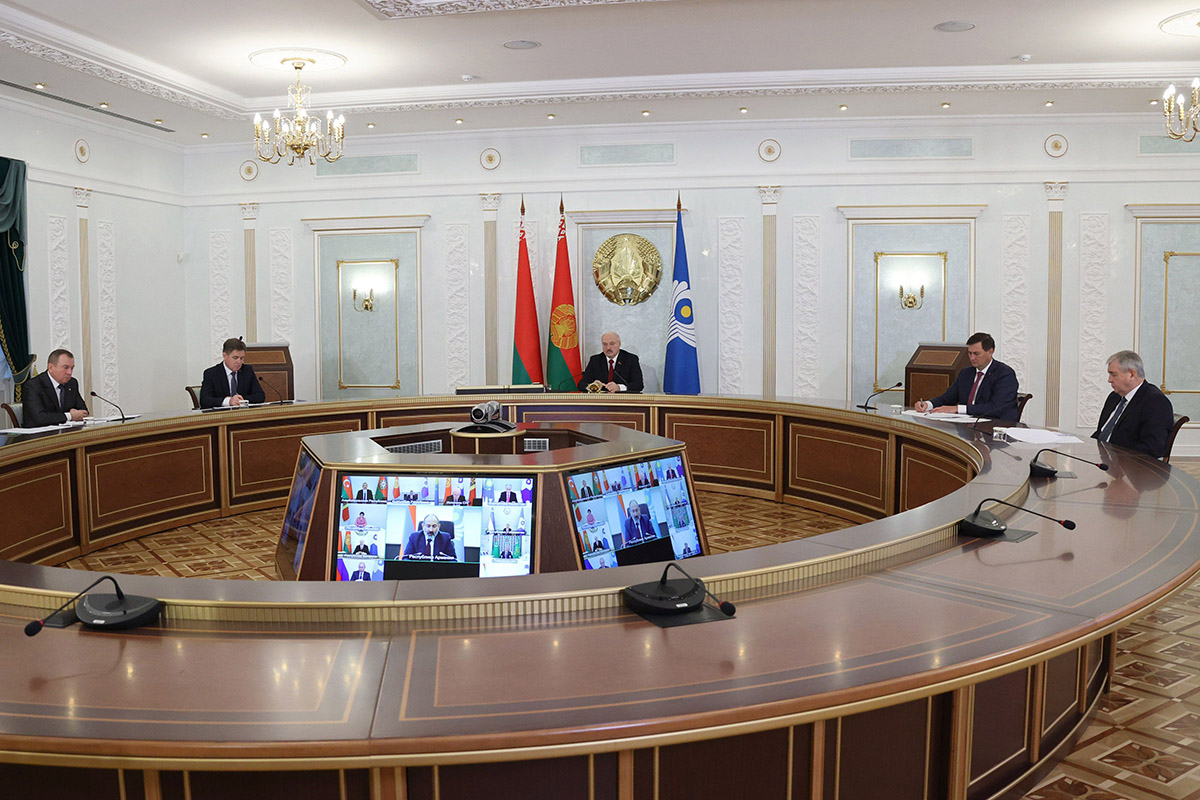 
Items on the agenda

The Belarusian Head of State drew attention to the key aspects of interaction in the CIS, “Great importance is attached to the development of the common economic space, expansion and enhancement of the efficiency of mutual trade. Work is underway on an agreement on free trade in services, to reduce to a minimum restrictions and exemptions from the free trade in goods, as well as on the elimination of technical barriers, unification of rules and procedures for public procurement.”
The President of Belarus noted that significant efforts were aimed at further developing co-operation in youth policy, culture, science, education, healthcare, sports, tourism and social protection.
Aleksandr Lukashenko focused on a particularly relevant topic, “We continue to work to minimise the spread of the coronavirus infection and its consequences.”
The agenda of the summit included such important topics as the development of interaction in the field of biological security, in the spheres of migration, protection of the electoral rights of citizens and guarantees of electoral sovereignty of the CIS member states.
The leaders of the countries have also identified the Moldovan city of Comrat as the CIS Capital of Culture in 2023.

The President assured his colleagues,

“Belarus has been and remains an active participant in regional integration associations. And today we confirm this once again.”

Aleksandr Lukashenko also noted that this meeting is significant, “It takes place on the eve of the thirtieth anniversary of the CIS. There are different points of view about the termination of the existence of the Soviet Union, or more precisely, its forced collapse. Everyone is well aware of my negative attitude to these events... But in that critical situation, the creation of such an integration, one might say, ‘dome’ that sheltered the former Soviet republics from the inevitable chaos and economic collapse was most likely the right decision.

For three decades, the Commonwealth has had a difficult path and has become a regional organisation recognised by the international community.”

Co-operation of economies is a topic that is among the priorities under the chairmanship of Belarus in the CIS. It is ‘at the junction’ of the interface between the integration processes in the CIS and the EAEU, and it’s to this that states intend to continue to pay the most serious attention. Aleksandr
Lukashenko stressed,

“In conditions of instability in the world, the co-operation of the mutually complementary economies of the CIS states is of decisive importance. We must understand that no one is waiting for us anywhere in any markets. The markets have long been divided. Therefore, God willing, we must keep our own, and it’s here we need to seek our happiness.”

The subject of discussion at the summit was also the topic of sanctions pressure applied by the collective West contrary to all norms of international law. The Belarusian leader stressed that from year to year, due to impunity and the notorious law of force, the measures applied to our countries are becoming wider and not so harmless for national economies, “You all know what unprecedented sanctions pressure Belarus faced this year. And it was not only Belarus.”
In this regard, Aleksandr Lukashenko proposed to take further real steps to unite efforts to jointly protect interests in the world market to strengthen the role and weight of the Commonwealth.
At the same time, the Head of State noted,

“I believe that under the current conditions, the Union State can once again act as a locomotive of integration processes, offering the best practices for the EAEU and the CIS.”

The heads of state — members of the Commonwealth of Independent States — adopted a statement in connection with the 30th anniversary of the CIS
The document, in particular, says:
Our common task is to make the most of the potential of the Commonwealth, strengthen its position in the international arena and facilitate its dynamic development. Viewing trade-economic co-operation as a key factor of closer economic integration and sustainable development of the CIS member states, we declare our commitment to creating an enabling environment for effective economic interaction, fully-fledged operation of the free trade zone and transition to deeper economic integration.