The Victory Train travels around Belarus: a unique journey to the events of the Great Patriotic War, which was created using modern technologies

The arrival of the Victory Train is a significant event for each of the localities, because letters with a request to bring the project to their city are still received by the organisers from all over Belarus and Russia. The Victory Train is the large-scale historical and educational project, which is being implemented on the initiative of Belarusian Railways together with Russian Railways as part of the Year of Historical Memory with the support of the Belarus President Administration and the active assistance of the Republican Volunteer Centre. 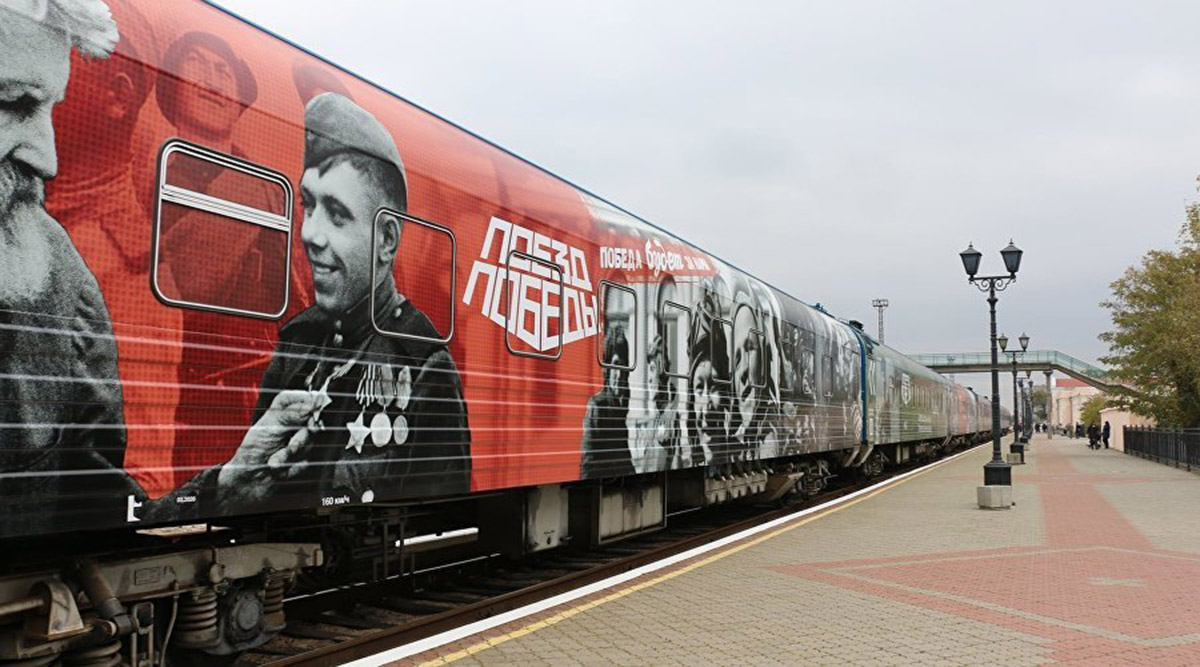 The Victory Train reached Belarus for the first time last year. Then its exposition was visited by more than 25,000 inhabitants of the country in 8 cities. This year, the unique mobile museum runs on the Belarusian Railways from June 10th to July 4th. Its geography has been significantly expanded — the mobile museum makes stops in 17 cities — Orsha, Polotsk, Vitebsk, Krichev, Zhlobin, Osipovichi, Baranovichi, Luninets, Pinsk, Brest, Grodno, Kalinkovichi, Gomel, Mogilev, Bobruisk, Soligorsk and Minsk. The project is a unique interactive exposition based on the ‘participation effect’, which is dedicated to the feat of the Soviet people during the Great Patriotic War and was created on the basis of nine carriages of a mobile exhibition and lecture complex.
The exposition is based on three-dimensional panoramas: paintings, life-size models and a lot of subject plans at arm’s length — more than 150 figures in total and over 4,000 original props. To date, there are not so many multi-figure compositions in sculpture in the museums of the world.
The route of the Victory Train is a transition from one episode to another. Pre-war years — the Great Patriotic War — Victory. All solutions used in the exposition make it possible to show the scale of events, to present the feat of the Soviet people. 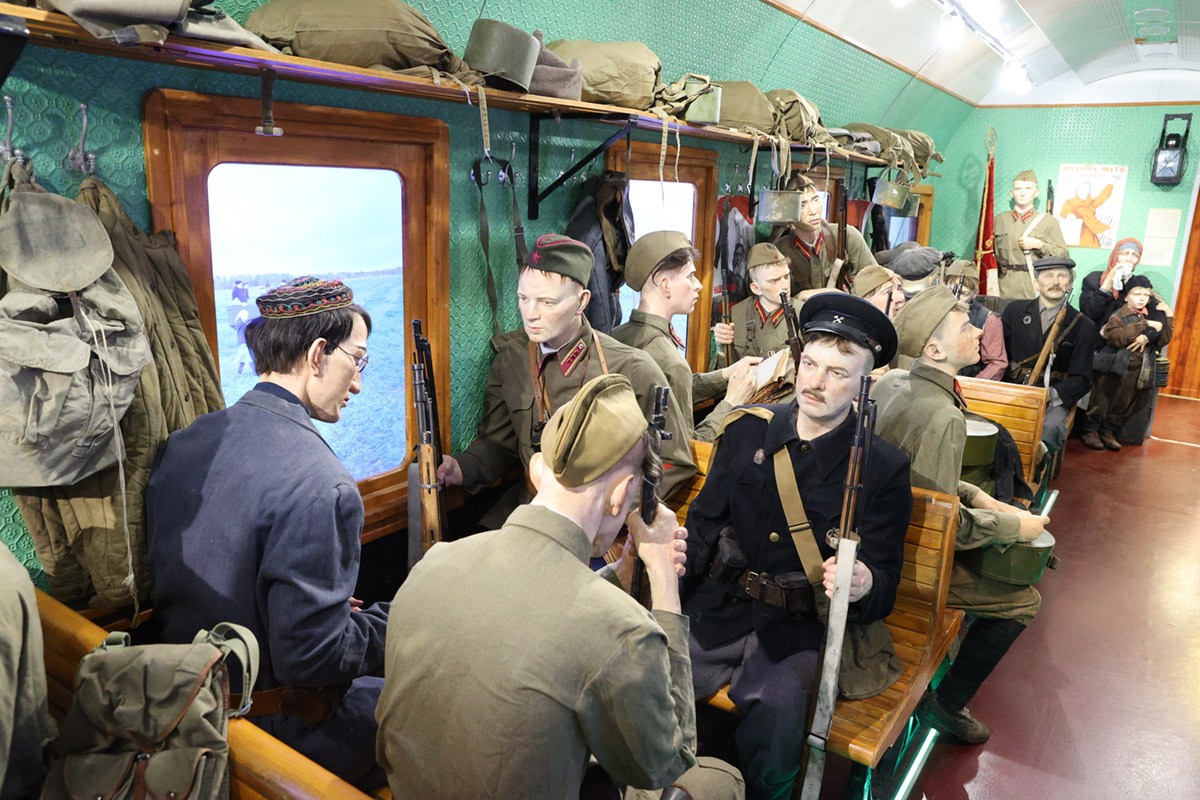 
The museum exposition started in Belarus on June 10th from Orsha, where the residents of the ‘eastern gate’ of our country could visit the Victory Train. Those wishing to get into the museum gathered in the morning— both residents and guests of the city.
Last year, about 2,000 residents of Orsha were able to get acquainted with the unique project. There are even more visitors this year, because interest in it does not weaken, the first deputy chairman of the Orsha regional executive committee, Viktor Kolochev, is convinced, “Today many are trying to rewrite the history of the Great Patriotic War. Our task is to convey to the younger generation the truth about the great feat of partisans and underground fighters, soldiers and officers, civilians — all those who forged the Great Victory. It’s nice to see a lot of young people here — the grandchildren and great-grandchildren of the winners. On such days, we are always together, and we will not give our victory to anyone!”
Schoolchildren stood out in bright flocks among the many who wanted to get into the museum. There is age limit — over 12 years old. The reasonableness of this measure becomes clear when one gets inside the museum, Alexander Gorbanev, a third-year student of the Orsha Railway College, shares his impressions. For the second year in a row, he was involved in the project as a volunteer and is very happy about it, “Everything is very realistic here. Each visitor fully feels the ‘participation effect’. It touches the soul and gives the shivers. The concentration camp wagon has made the strongest impression on me and on most people. Here one can realise how terrible the conditions of the prisoners were, how terrible it is as a whole. Even now, visiting the train for the second time, I experience a storm of emotions, my feelings do not fade. I am sure that every person, leaving the train, feels pride in the feat of our grandfathers and great-grandfathers, the high price of their gift — a peaceful sky over our country. Therefore, no excursion is complete without tears.” 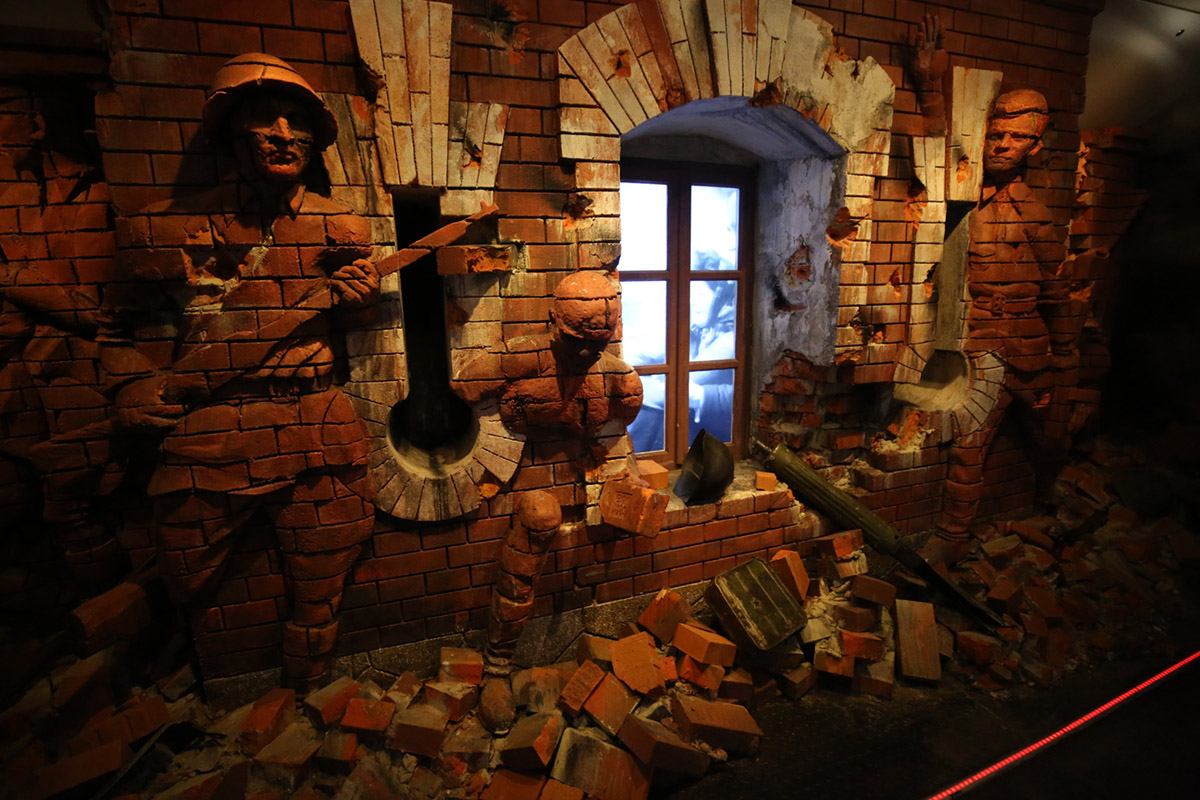 
The 87-year-old Viktor Yuranov agree with the young guide after finishing the tour. At the age of six he was taken prisoner and was taken to Auschwitz in a carriage similar to that of a train, and was in other concentration camps together with his parents and three sisters. Then there was liberation, return to their homeland, a period of restoration of the country and the national economy, recalls the veteran, “I myself have seen and experienced all these horrors. Such projects are the must for young people. They help to better understand the tragedy that our people had to endure. New generations should know how scary it really is, so that such events never happen again.”
His words echo the thoughts of veteran Zinaida Kontanistova, who spent 90 days in besieged Leningrad in her youth. With tears in her eyes, the woman looks around the well-groomed station, blooming greenery, smiling faces of the townspeople and returns to reality, “Thanks God, we have a quiet life, so that our land no longer knows war. And thanks to our President that he is trying to make everything go well with us.”
The first station in the southeastern region that met the museum-train was the city of Belarusian metallurgists — Zhlobin. On the platform, Zhlobin residents arranged a patriotic reception with a rally, concert numbers, and the presence of veterans. Honorary veteran Tamara Momotova noted that the unique train arrived in the city on the eve of liberation from Nazi invaders, and this is very symbolic moment. 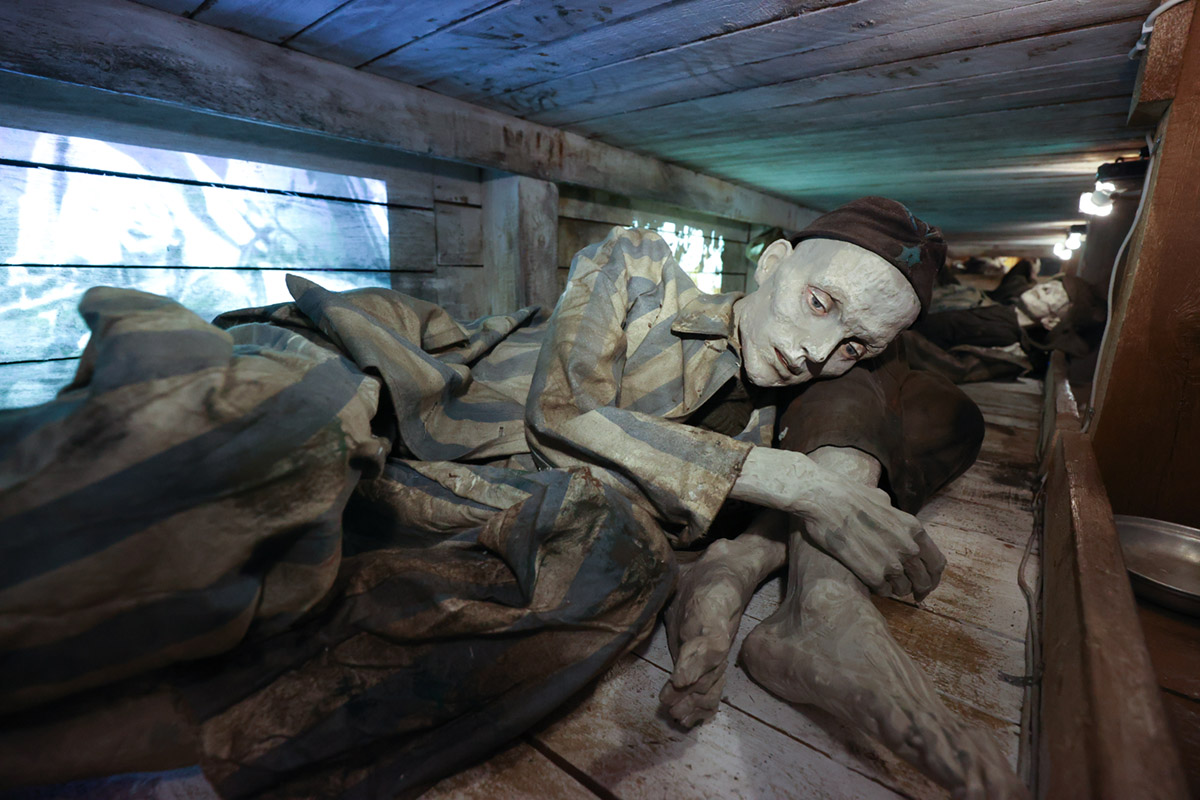 
As the first secretary of the Zhlobin District committee of the BRSM Youth Union, Elena Kholupova, said, there are a lot of people who want to get on this project in the region, “People often call us, sign up with their families. This is easy to explain: the museum has united the stories of the fates of people who gained the Great Victory at the cost of their own lives, people whose exploits will live forever in our hearts. It is these projects that become an important element in uniting all generations. Young people, passing through the cars of the Victory Train, come out with tears in their eyes, it really impresses them. This train shows firsthand the terrible events of the Great Patriotic War, which, unfortunately, some contemporaries are trying to distort.”
The entire train schedule is made taking into account public holidays and memorable dates. The Victory Train arrived in Brest on June 21st, on the eve of the National Remembrance Day of the Victims of the Great Patriotic War and the Genocide of the Belarusian people. By the way, one of the carriages of the exposition is dedicated to the feat of the defenders of the Brest Fortress — participants in the heroic defence, soldiers and commanders of the Red Army.
In Mogilev, the exposition can be visited on June 28th, on the Day of the liberation of the city from the Nazi invaders. However, the tour of Belarus will end in Minsk — during the celebration of the Independence Day of the Republic of Belarus.

Notice
On June 22nd, the Memory Train began its journey from the Brest railway station, on which 200 schoolchildren from the two countries went to the cities of Belarus and Russia. The international project Memory Train was initiated by the heads of the upper houses of the parliaments of Belarus and Russia — the Chairwoman of the Council of the Republic Natalya Kochanova and the Chairwoman of the Federation Council of the Russian Federation Valentina Matviyenko.

Together we will preserve historical memory
The international parliamentary conference Historical Memory: The Great Victory Gained by Unity was held from June 14th to June 15th in Minsk
Delegations of parliaments from the countries — the former republics of the USSR, representative of the CIS Inter-Parliamentary Assembly, the CSTO Parliamentary Assembly, the Parliamentary Assembly of the Union State of Belarus and Russia, government bodies, scientific and expert communities were invited to participate in the conference.
From Aleksandr Lukashenko’s greeting to the participants of the conference, “I am convinced that together we will preserve the common heroic past, we will not allow the Victory won by unity, exceptional courage and sacrifice of soldiers, partisans, underground fighters and many ordinary people to be taken away from us, and we will pass on this truth to future generations.”
To prevent the falsification of historical facts and preserve the memory for the sake of future generations — this idea was the main message of all the speeches of the conference. The plenary session absorbed all the meanings of the concept of historical memory that exist today not only in our country, but also in other states where the events of 1941-1945 are honoured and remembered. In the Belarusian Parliament’s Oval Hall, the high ranking officials of the country, scientists and representatives of state bodies, parliamentarians, foreign guests were unanimous that the issue of preserving historical memory has acquired strategic importance today more than ever.
The participants of the international conference adopted a resolution at the end of the international conference, in which they called on to sacredly honour the memory of those who died in the struggle against Nazism, to condemn any justification of the Nazi movement, and also appealed to the peoples and parliaments of the countries of the world to actively impede the efforts to revive the ideology of Nazism and condemn any attempts to falsify the history and revise the results of the Second World War.