The opening ceremony was attended by the BSU Prorector for Academic Work and Education Internationalisation – Konstantin Kozadayev, the Dean of the Journalism Department – Olga Samusevich, the founder of China’s Yaotian Education Centre – Wang Yaotian, BSU employees and students, as informed by the Belarusian State University’s press service 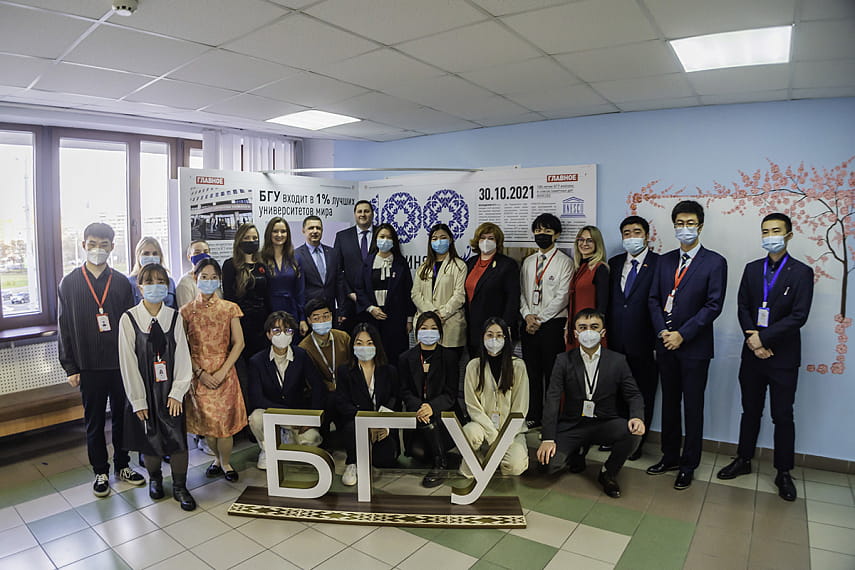 In his address to those present, Mr. Kozadayev congratulated the Journalism Department on an important event, stressing that the new media centre confirms reliable Belarusian-Chinese partnership. He thanked Wang Yaotian for his assistance in implementation of the joint project and expressed hope that the new structure would contribute to further fruitful co-operation.

The media centre will be aimed at formation of practical skills among journalism students and promotion of BSU among Chinese applicants. Since training is ensured for various kinds of mass media, the centre is structurally divided into network TV, social network and technical departments. Seminars, practical classes on video and photo editing, production of journalistic and PR texts will be held here. The centre boasts modern equipment, computers for video editing and layout of publications, an interactive panel, a projector, a TV set and other equipment. Educational projects with participation of leading scientists and practitioners of the two countries will be implemented on its basis as well.

It is assumed that the centre will become a practical platform for student media products. Chinese students, for example, already make videos about BSU studies for Instagram, WeChat and TikTok. They interview lecturers and friends, while taking photos of Belarus’ sights.

Opening of the Belarusian-Chinese media centre has become possible thanks to the Yaotian Educational Centre and its founder Wang Yaotian, who has been co-operating with BSU since 2012. By now, BSU’s information and education centre in Beijing, BSU’s pre-university education centre in Sanya and an information centre for foreign students as part of BSU’s International Relations Department have opened with his assistance. In addition, an agreement was signed on allocation of grants to Chinese students in recognition of their academic excellence and scientific accomplishments.

At present, 2,177 Chinese study at the Belarusian State University.