Belarus and Russia will continue to unite their effort to oppose Western sanctions – as a joint statement of Belarusian and Russian foreign ministers, Vladimir Makei and Sergei Lavrov, signed on the occasion of the 30th anniversary of the establishment of diplomatic relations between the countries reads, BelTA reports 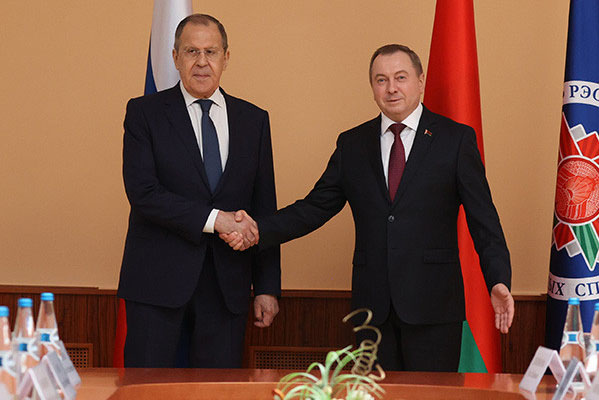 As noted in the document, after the start of Russia's special military operation to protect Donbass’ residents, a tendency inspired by the collective West to limit interaction with Belarusian and Russian official representatives is intensifying, up to the suspension of membership and exclusion of Belarus and Russia from various international organisations and multilateral treaties, including industry-oriented ones.

"The Ukrainian theme is widely exploited on all international platforms without exception, without regard to organisations’ areas of specialisation and the consequences of the ultimatums put forward by the West in relation to Belarus and Russia. A growing sanctions policy of the West against the Republic of Belarus and the Russian Federation is aimed at producing maximum damage to our states and economies, as well as at defeating the rights of citizens of Belarus and Russia. These unprecedented harsh sanctions are not limited to financial and economic prohibitions: they apply to sports, cultural, tourist and educational spheres, as well as contacts between people. Unprecedented information aggression has been unleashed against the two countries and the Union State," the ministers stressed.

Belarus and Russia announced the continuation of their consolidated efforts to challenge illegitimate sanctions decisions in international organisations and convince partners in multilateral mechanisms of the harmful consequences of what is happening both for the principle of multilateralism itself and in terms of damage to socio-economic development of individual states. "Co-ordination between our countries will be strengthened at all levels, including through relevant departments, in order to develop tactics and concrete counteraction measures in a timely manner," the document reads.