The well-being of the state and its food security are in the hands of the workers of the agro-industrial complex. The President of Belarus stated this during a solemn ceremony at the Palace of Independence to honour best agricultural workers. 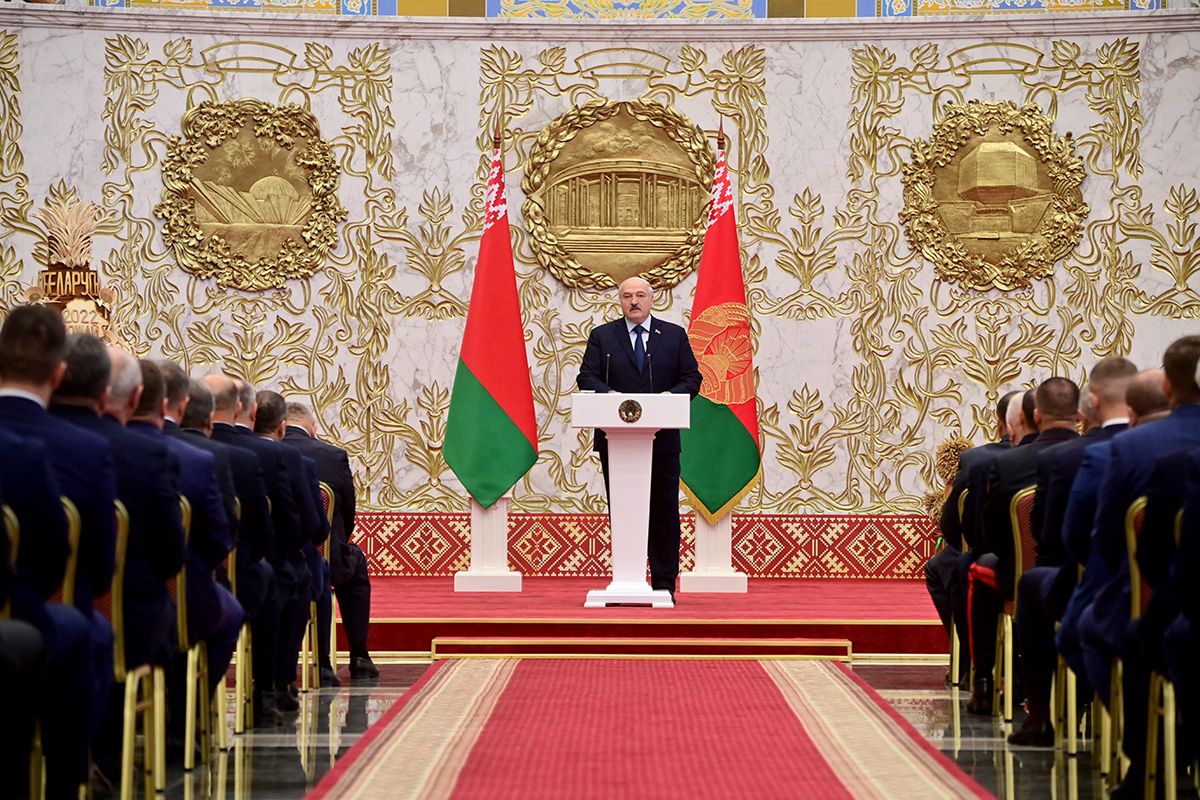 “You are the keepers of the traditions which were born on this land thousands of years ago. We, Belarusians, know well that our centuries-old history — including estates and palaces, families of the richest — was built primarily by the work of peasants. The development of our native land has always rested on the shoulders of those who cultivated the land, sowed, ploughed, reaped the harvest and baked bread,” Aleksandr Lukashenko addressed the representatives of the agrarian sector.
According to the President, nothing has changed since then,
“Yes, the world is at the peak of technological, digital progress, and there is no limit to innovative development. However, this is possible only on one condition: if people are fed and clothed. Every Belarusian understands that wellbeing of the state and our food security are in your hands, the hands of machine operators, agronomists, cattle breeders, veterinarians, bakers, cheese makers, scientists — all those involved in agriculture.”
On behalf of the entire nation and himself, Aleksandr Lukashenko also thanked those who come to help the rural area: machine builders, chemists, transport workers, biotechnologists, builders, military personnel, employees of the Emergencies Ministry and law enforcement agencies.
“Thank you very much for your hard work, and, first of all, for the record-high harvest you gathered this year. More than 10.5 million tonnes of grain have been threshed. This is almost a million and a half more than we had last year.
Every wheat spikelet is worth its weight in gold in our time. Look at the situation in the world. Last year, 828 million people (about a tenth of the world’s population) were affected by hunger. The number of people who cannot afford a healthy diet has exceeded 3 billion. Growth of consumer prices for food has played a role as well. The world is one step away from a global food catastrophe.
For a variety of reasons. Not only climatic and geographic. There are countries that at one time abandoned their own agricultural production becoming markets for imported products. In the eyes of Western curators, they are more democratic than you and me,” the President said.
On the other hand, Belarus was ahead of the CIS countries in the Global Food Security ranking last year and is able to feed itself, the President stressed. Not just itself.
“Export earnings this year will reach record levels — more than 20 billion rubles. No matter how they stifle domestic producers with sanctions, we traditionally occupy worthy positions in world rankings. We are one of the five largest exporters of dairy products, which today can be found on the shelves of supermarkets in almost 50 countries around the world. For the first time in history, we have produced more than a tonne of bread and grain for each person. This is a success that, I am sure, even the largest states of our planet have not achieved,” noted Aleksandr Lukashenko.
Belarus has penetrated the Chinese market and successfully competes with New Zealand, an internationally recognised leader of the dairy industry, the Head of State stated.
“We truly have something to offer. We make over 1,800 dairy product titles. 1,800! We make cheeses, which taste and quality are on par with prominent world brands. A number of Belarusian companies have reached world level results in milk production. We make over 1,000 meat product titles. These products are exported to over 30 countries across the globe. At present Belarus is recognised not only thanks to the famous MTZ tractor and the BELAZ truck but also thanks to such brands as Savushkin Product or Babushkina Krynka. Everyone, who appreciates organic food, opts for Belarusian producers. I am told that even Western sophisticated citizens of the collective West leave Belarus with huge sacks these days. They buy up everything our market has to offer. But primarily food. While introducing modern technologies, we’ve managed to preserve our traditions. The fact that today we can offer products for the most exacting gourmets and for people in need of special and medical nutrition is another great accomplishment of ours,” said the President.
Belarus’ self-sufficiency with regard to the main foods exceeds 100 percent. All of them are of high quality and affordable. 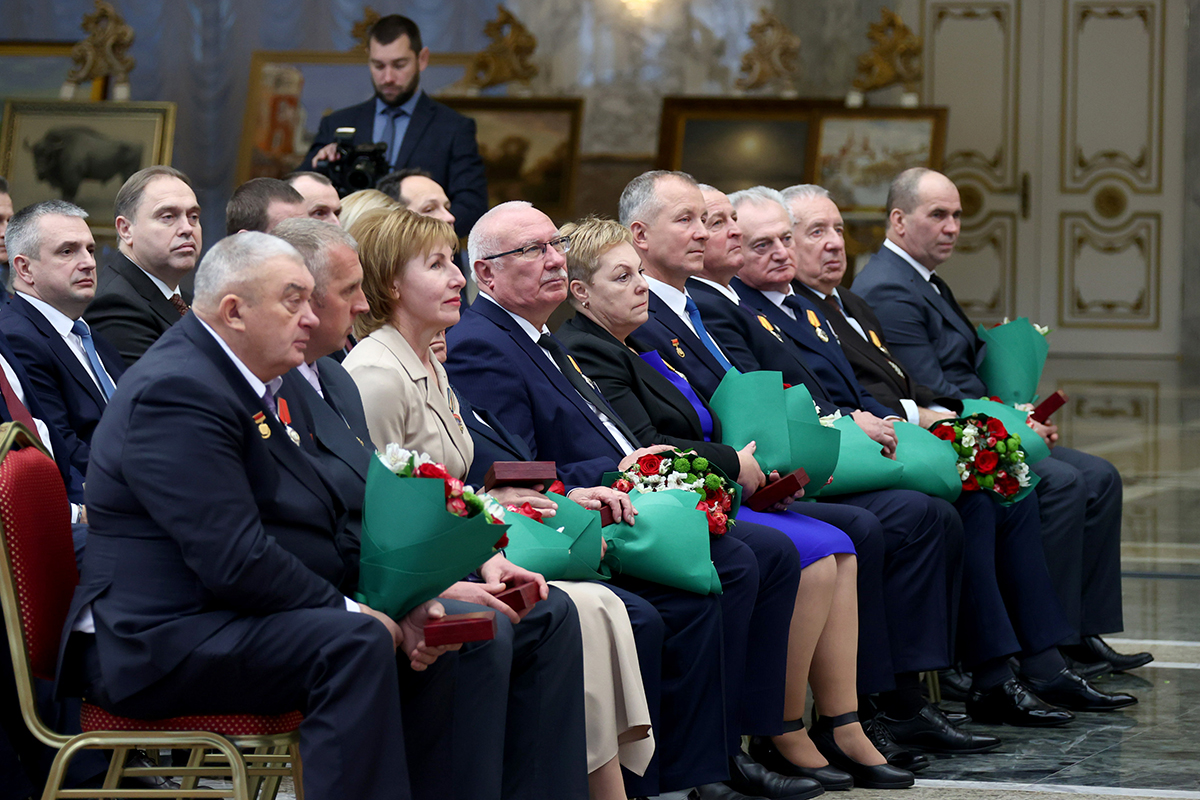 “I thank those who are in this hall and the thousands of workers who remained at their jobs, continuing to perform their professional duties, without even thinking about the magnitude of their role in the history of the state, preserving its sovereignty and independence. You are the humblest, but the most reliable, the most hardworking of all of us. You have withstood everything: the pandemic, sanctions and attempts to draw you into political games under the guise of a rebellion. Furthermore, you passed the tests with honour and dignity, because we are always busy with work, you know the value of work, look wisely and realistically at our sometimes frantic life,” noted Aleksandr Lukashenko.
According to the President, life shows that the most effective and diligent leaders, famous scientists, doctors, teachers, inventors are born and grow up in an ordinary village:
“The village is the best school of life. There, from an early age, everyone is involved in household chores. Everyone knows what daily physical labour and responsibility for the household, for the family. This sense of responsibility, the skills of planning, mobilising funds to achieve results are instilled once and for all, and experience is passed down from generation to generation,” emphasised the President.
The Head of State stressed that without intensive and meticulous work, without innovations and mutual assistance it is impossible to achieve high results. Prosperity can be achieved only through creative labour, “You and I have accomplished a lot. By straining the nation’s strength, through manufacturing cooperation with close and friendly countries. A lot has yet to be accomplished. The task of income levelling in the countryside and in urban areas remains topical. It remains on the watch list. Requirements for those, who are responsible for accomplishing this task, will be raised. But money needs to be earned. The components are well-known: investments, technologies and discipline.”
Aleksandr Lukashenko assured the government will continue providing support to agricultural enterprises with modernising their manufacturing capabilities. Primarily with the construction of farms, acquisition of expensive machines, tools, and vehicles, with land amelioration.
In total, about 600 people were invited to the solemn event. On this festive day, the President wholeheartedly wished everyone strong health, happiness and wellbeing, and also peace and kindness to the Belarusian land. 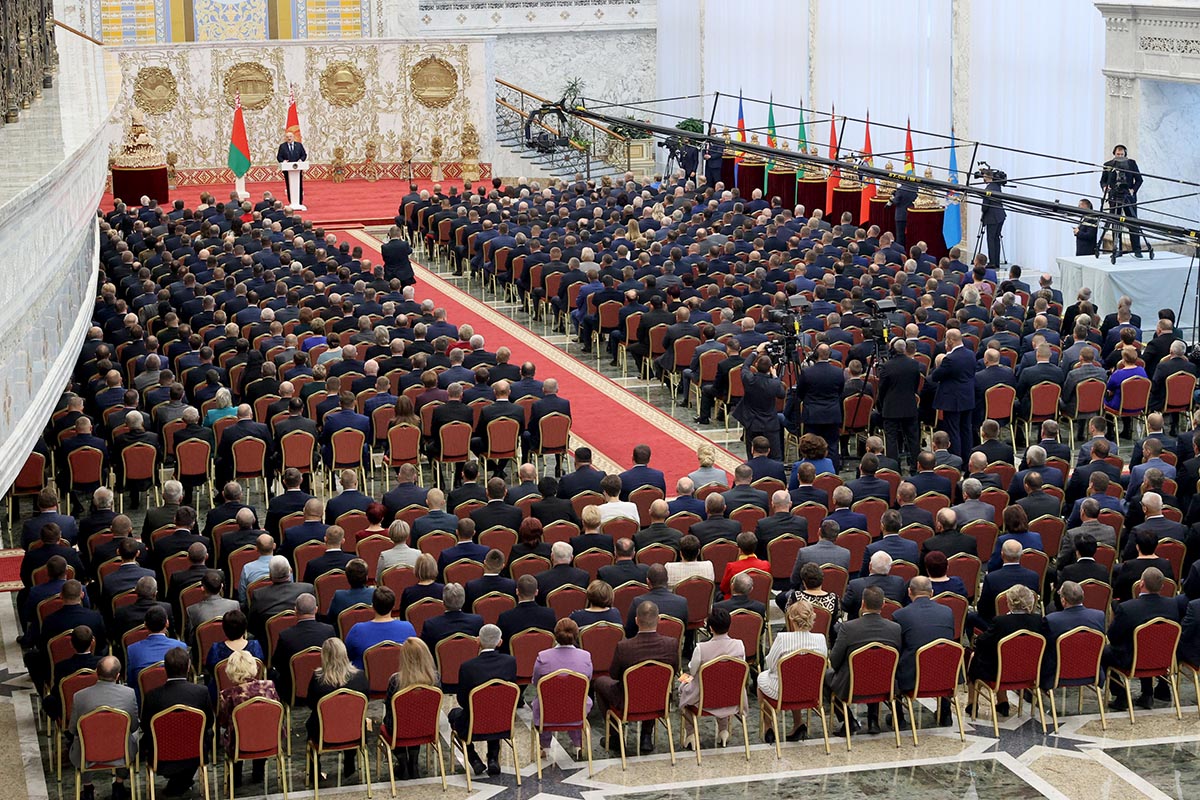 The Head of State said that perhaps today’s celebration in the Palace of Independence would give birth to another tradition of modern Belarus, based on the traditions of the past:
“All the districts and regions of the country held Dazhynki celebrations. We thanked everyone. At the same time, the number of qualified and hard-working rural specialists keeps increasing, and it is impossible to honour them all in the Belarusian capital. Many of them are awarded for their work on site,” he said.
Aleksandr Lukashenko added that ministers, members of the government, the prime minister, top government officials, and he will keep agricultural people on their toes,
“It is necessary to use this time to make life better for our peasants. So that they could live a decent life. In good conditions, in good houses. So that their kids would have an opportunity to get good education, go to university like everyone in cities, including in Minsk, can. So that they could occupy a decent position in our society as diligent people, the future, our personnel reserve. You have to agree that peasants, agribusiness workers deserve it. Let’s do everything for the sake of our children.”


The President spoke about the withdrawal of McDonald’s from Belarus
The place of McDonald’s, which is leaving the Belarusian market, should be taken by domestic enterprises and manufacturers. Addressing the Belarusians, the Head of State focused on the following, “I always urge you to eat locally-produced food and ignore imported stuff. This is relevant today. Some people, especially youngsters (and, probably, middle-aged, and maybe older) are lamenting the withdrawal of McDonald’s. I say, thank goodness they are leaving! McDonald’s, which employs our people, our specialists and sources our products, should be replaced by Belarusians.”
Aleksandr Lukashenko addressed Prime Minister Roman Golovchenko, who was present in the hall, “Roman Alexandrovich, Belarusians! Remember, no one else. We ourselves must do what this McDonald’s once did, if someone needs it, and even better.”