The President of Belarus met with head of the Udmurt Republic of the Russian Federation Aleksandr Brechalov. Aleksandr Lukashenko is convinced that Belarus and Russia are capable of doing a lot if they unite efforts, “Actually, we can do a lot. I will refer to the talks with the Russian President. The main thing we discuss is that we can do everything, but we need a little time for it. Even today the main thing is not money. Today Russia has a lot of currency. Imports have decreased. Yet, we do not have much time and need to act.” 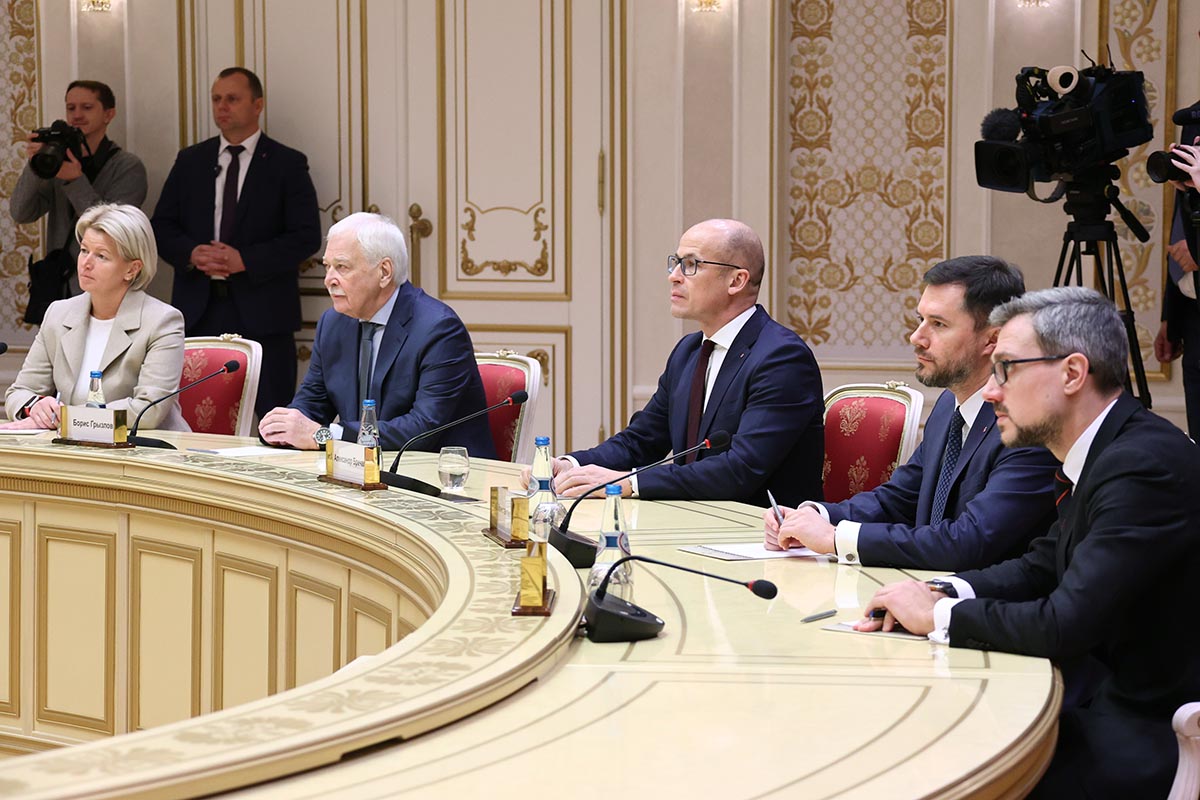 The two countries have outlined joint import substitution projects. More than a dozen of them will be implemented in Belarus and very many in Russia. At the same time, Russia finances, provides loans for projects.
According to the Head of State, Belarus is very interested in co-operation with the enterprises of Udmurtia, “You know our capabilities in hi-tech, car manufacturing, even the defence industry.”
The President named the supply of eco-friendly types of public transport, including the elevators, as one of the areas of potential interest for the Russian region, “President Putin asked me to pay attention to the issue of replacing imported elevators in Russia with Belarusian ones. I promised to do it, and we are fulfilling this promise.”
Aleksandr Lukashenko is convinced that it is important not to forget the base and experience that were accumulated back in the days of the Soviet Union. The President stated that today Belarus has introduced the development of high-tech sectors in addition to the traditional sectors of the economy,

“The Belarusian National Biotechnology Corporation, nuclear energy, space, military-industrial complex, Hi-Tech Park — these are five such powerful areas. They raise the nation to a completely different level of development.”

Aleksandr Lukashenko also emphasised, “I am sure that the people in Russia also think that we will be able to withstand, both militarily and economically, this attack coming from the so-called collective West and our other enemies. An extremely fierce warfare is going on in the media.”
In this regard, the Head of State noted that he is closely watching the discussion of these issues in Russia, “This is also a hot topic here in Belarus. I am following it with interest, I am getting additional information. Especially now as something has fallen on the territory of Poland.”
Aleksandr Lukashenko noticed that no one asks and answers a number of questions, “Why did this frantic rocket fired by the Ukrainian military (and they fired it eastwards as they were trying to hit Russian missiles in the east) turn around and fly in the opposite direction? Let experts answer this question. There is no way it can happen. It does not look like an accident. Well, one can say that a Russian missile flew to the west of Lvov, towards Poland, so the S-300 turned around and fired westwards. The question is: how come you, Ukrainians, fired towards a NATO state? Well, the main question that no one, including the Americans, answers is the following: at the moment when the Ukrainians were launching the S-300 missile, what target were they hitting, what objects? There were no missiles in the air at that time. No answer. The Americans are keeping silent as well. Because they understand that we also have means of control. We see some things from here.”

“They need to answer simple questions. Why did this attack on a NATO state, as it was originally presented, occur during the G20 summit? You know, I’m afraid to draw conclusions, but it seems like a big-time false flag that nothing can compare to. But things did not go smoothly. People were killed. Poland needs to give answers to its own people. The Polish leadership needs to explain to the Poles how this could happen, why they hit the territory of Poland, who gave the green light, why the missile suddenly veered around from east to west and why they launched a rocket at a time when there were no Russian missiles in the air. There were no missiles at that point. These questions need answers, and then everything will become clear,” added the President.

In connection with this situation, he spoke approvingly of U.S. President Joe Biden, “Well done, Joe Biden. We should give credit where credit is due. He said honestly: ‘Sorry, it was not fired from Russia [missile that fell on the territory of Poland]’.”
“They are waging a fierce war against us. This example is telling. They stumbled and backtracked quickly, like thieves. This topic is already off the headlines in the West. Well, this is just the beginning. Poles and Ukrainians regret that it was not a Russian missile. They need a provocation, an escalation. Therefore, we need to take care of our people, our economy. Economy is at the heart of everything. With strong economy, no wars will scare us. I think if there is a god, he will soon uncover the truth,” concluded the President of Belarus.