In the expositions of military museums, dioramas reproducing battle scenes attract the special attention of visitors. You can stand in front of such an exhibit for a long time, plunging into the atmosphere of the event, examining the details of military equipment, weapons and ammunition. But even more time and effort are spent on making the models. Ruslan Shilov, a Gomel resident, shared the secrets of his skill with The MT. 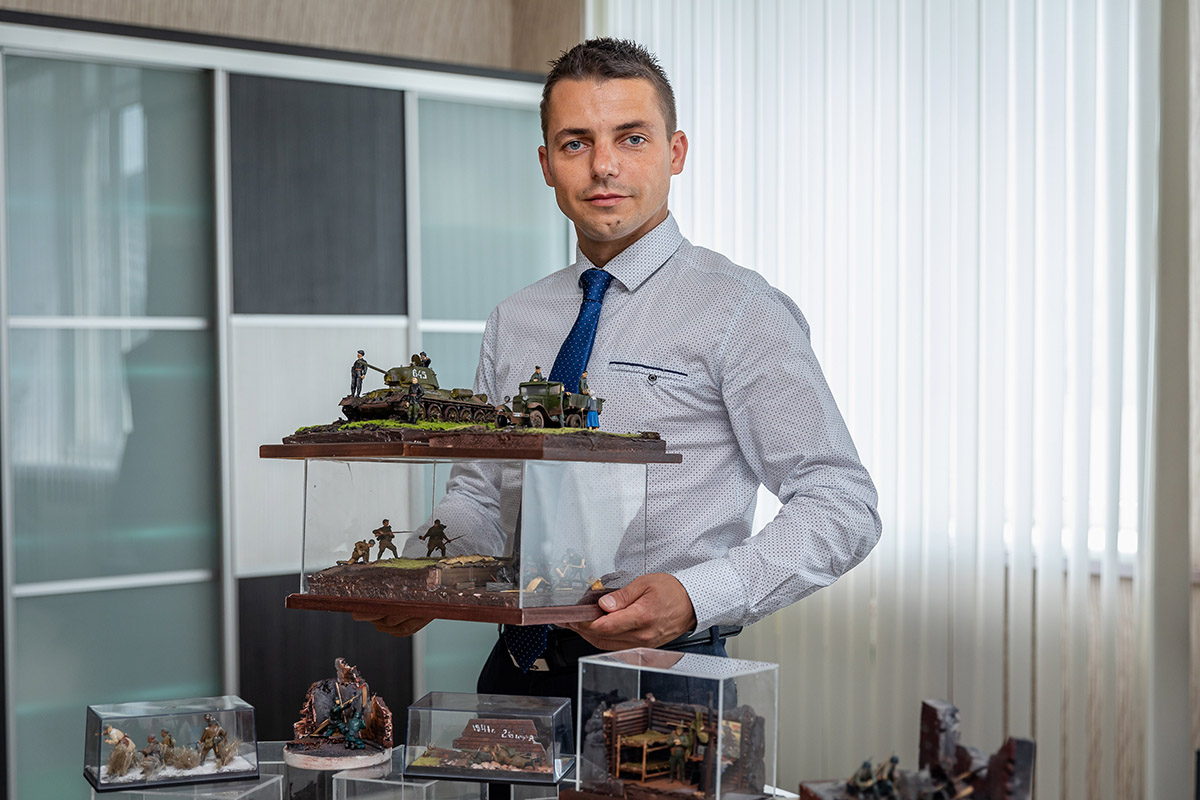 He has been creating models for a little over two years though the theme of the Great Patriotic War has attracted him from childhood. The development of his interest was facilitated by films and books, as well as the subject study of WWII events during his years of study at pedagogical college.
A test of strength was the production of a model of a family house in the village of Uborok, Loev District. 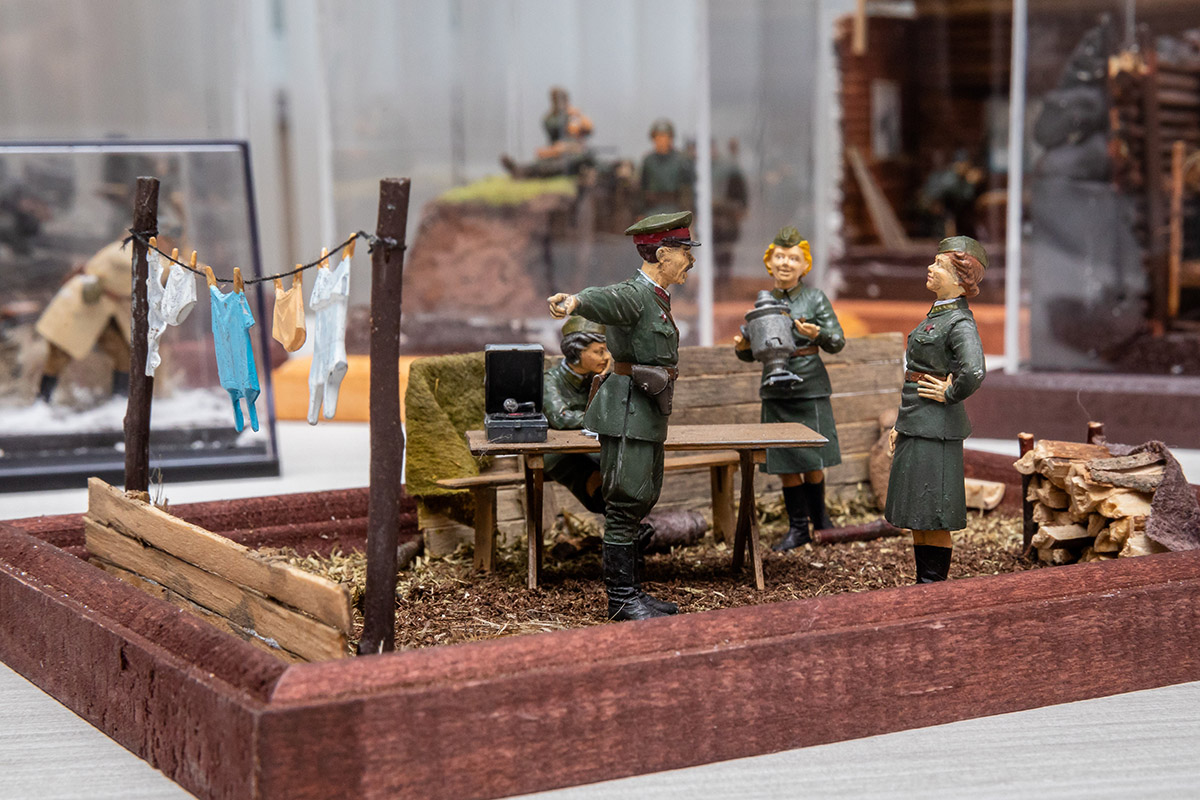 “I photographed every detail, drew a plan and began to do it,” said Ruslan, describing the progress of the work. “I tried to reproduce it as accurately as possible. When I posted the photo on Instagram, many — not knowing the scale — thought it was a real home. The result pleased me, and I decided to continue.”
To implement the artist’s intention, materials that were to hand were used. The walls of the house were built from coffee stirring sticks and real putty. To simulate the soil, real earth was used: sifted through a strainer and mixed with tea leaves and coffee to add texture. 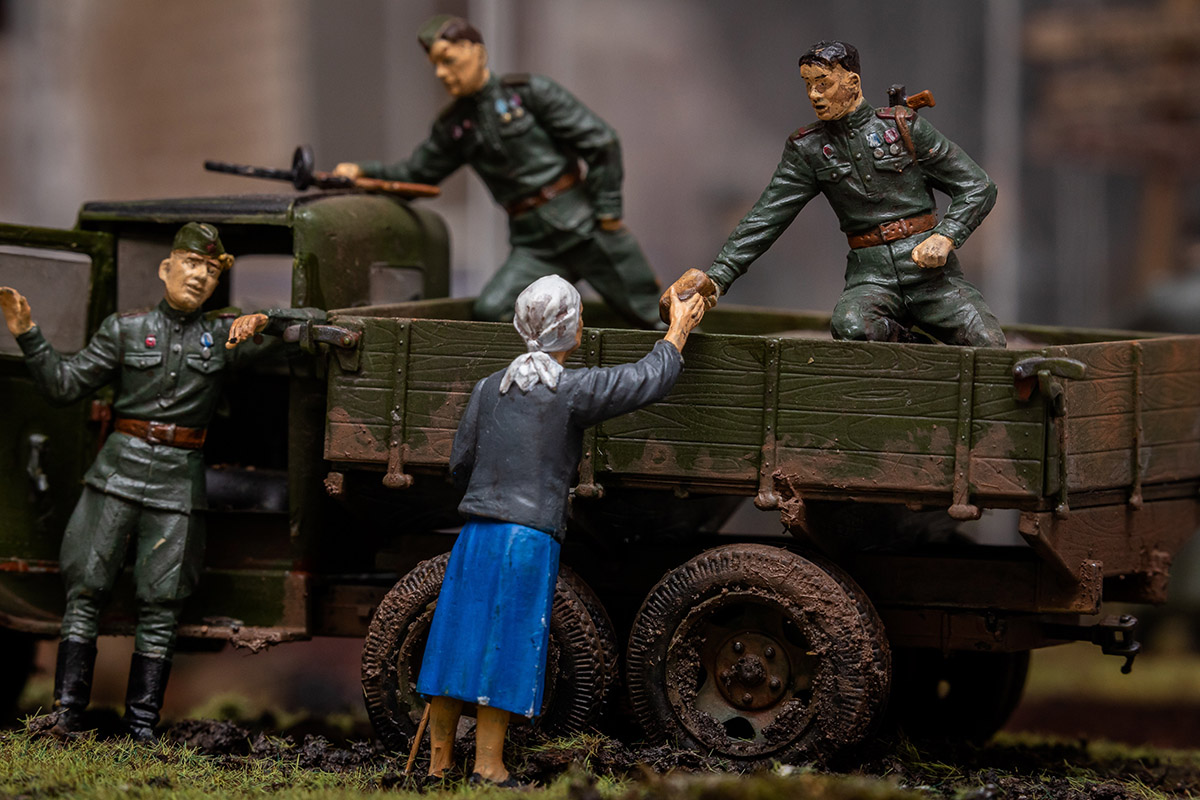 In general, there are no trifles in the business of model-makers. More precisely, the greatest attention is paid to details. After all, the thoroughness of the study and the realism of the details is one of the main criteria for evaluating the quality of work.
Figurines of people are ordered through online stores and come disassembled. It takes more than one hour to assemble them. Each element must be degreased, primed, painted, fixed in the necessary position and glued. The master’s arsenal includes a special tool for performing microscopic operations. For example, it’s necessary to hold a miniature brush with tweezers. If it suddenly falls to the floor — and this happens — you have to look for a long time. The observance of safety precautions shouldn’t be forgotten either. When working with glue, glasses prevent irritation of the mucous membranes of the eyes while a medical mask that protects against fine pollen is needed when planting ‘grass’ with the help of a special flock device. 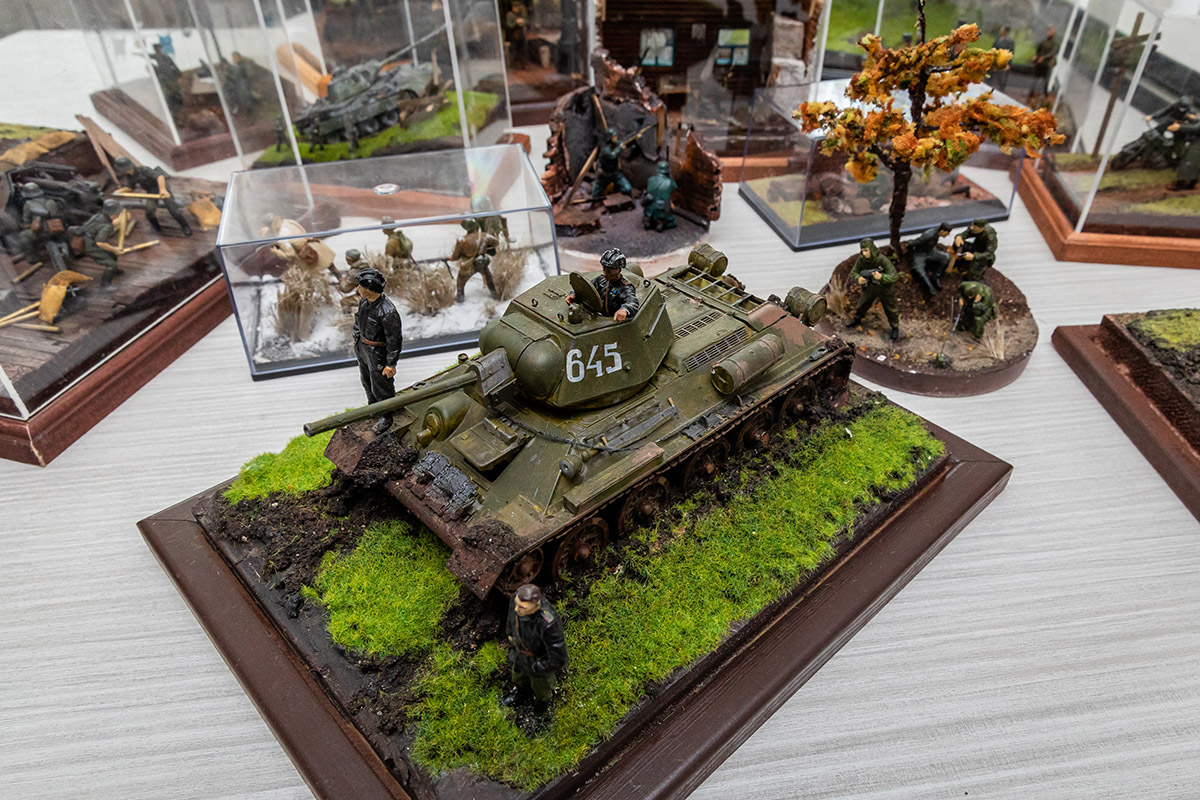 Some technological points were suggested by the Internet, but most were mastered empirically: by trial and error. Modelling is not a cheap hobby. However, a quick mind can significantly reduce costs. For example, Ruslan makes artificial snow from baking soda and PVA glue. Outwardly, it is no different from the purchased product. Wood, if you know how, can be made from a dish sponge. Moreover, if you paint it green and rub it through a fine grater, foliage can be made. Hairspray also performs well. For some properties, it is even better suited than glue. 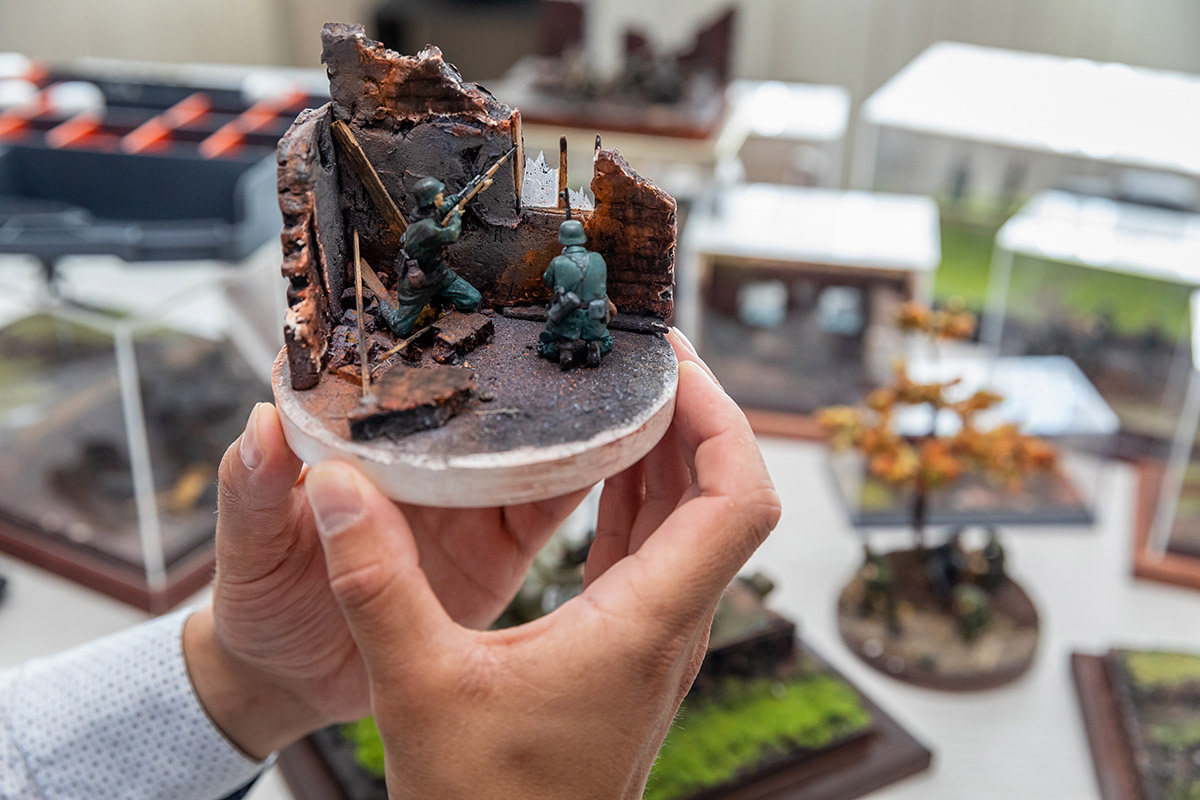 The plots of future scenes mature gradually. Some of them are inspired by movies. One of the first works is based on the famous film, entitled The Dawns Here Are Quiet: an episode in which the foreman Vaskov scolds the girls for hanging out clothes that betray the positions of the enemy aircraft. Another composition displays a mise-en-scene from We Are from the Future: senior lieutenant Demin is pointing the hands of his wristwatch, and there is an unfinished letter from his mother on the table. Yet another work shows the legendary sniper Vasily Zaitsev in the interior of a dilapidated house among the ruins of Stalingrad: there is a portrait of Stalin on the wall, a poker by the stove, broken windows, torn curtains... The more details, the more interesting it is to examine the model. One of the most difficult to perform was a German motorcycle with many small elements. It took three days to assemble it. 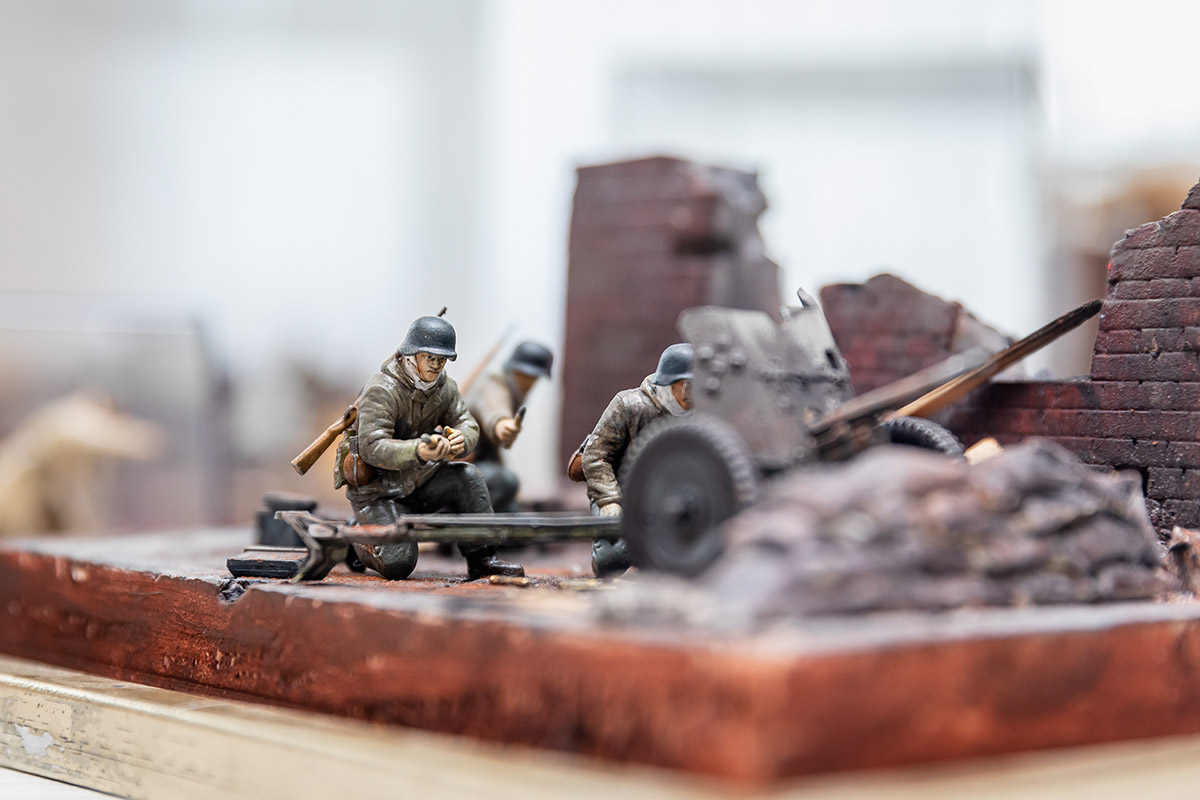 To date, Ruslan Shilov’s collection boasts fifteen works, and the creative process continues. There are plans to simulate not only front-line episodes, but also scenes from the Headquarters of the Commander-in-Chief, of course, with the participation of the main character: in the same grey jacket and with a pipe in his hands.
“The process itself gives me the greatest pleasure,” admits the artist. “Of course, it’s interesting to see the result: one you achieve with your own hands. It’s incredibly addictive and captivating.”