Strengthening interregional co-operation, successful projects in construction and agro-industrial complex — the main topics of the meeting of the President of Belarus with Voronezh Region Governor Alexander Gusev 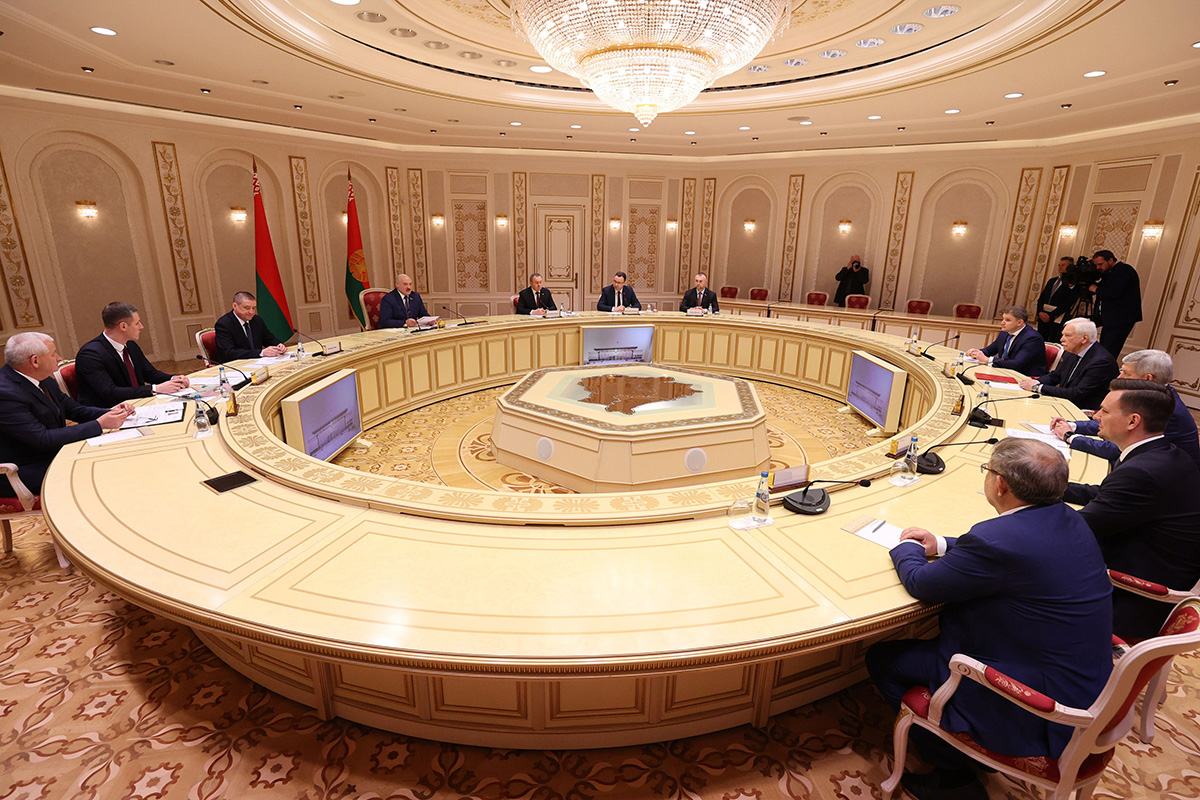 Greeting the guests,  Aleksandr Lukashenko noted  that he sees a great interest in the development of co-operation with Belarus on the part of Russian regions,

“Thanks to you, we have this co-operation. We are building a single Union State on the new principles to ensure that everyone’s interests are respected, that the sovereign independent states — Belarus and Russia — keep developing. I am sure that this union will attract other countries...”

Industrial co-operation should become a key aspect of trade and economic relations between Belarus and the Voronezh Region. The President emphasised, “Practice shows that it is co-operation that lays a strong foundation for long-term relations and gives a good integration effect. For example, when opening assembly plants in Russia, Belarus aims to increase the degree of their localisation, which guarantees new jobs in the region. It is obvious that one of the leading issues is co-operation in the construction sector.”
“You know how Belarusian builders work. Perhaps it is no match to Belarusian specialists in terms of value for money. The quality of construction works is very high,” the Head of State stressed.
He added that Belarusian school was the best in Soviet times, “It is not my achievement here, neither the current minister’s nor the government’s. It came from those times. We did not destroy this school, we preserved it. I am more and more convinced today that it became possible only because we did not destroy the state construction institutions. We still have the industrial groups we once had. They have risen to a higher level.”
However, if a private company has the same base, it participates in construction projects. On the other hand, requirements to the developers are quite tough in Belarus. This helps to avoid fraudulent schemes and regulate the price of housing.
Currently, Belarusians are building a football stadium and two schools in Voronezh Region. One of the schools will be designed for 3,000 students. According to Belarusian Architecture and Construction Minister Ruslan Parkhamovich, both education facilities will be commissioned in mid-2023.


Belarusian brands with a worldwide reputation 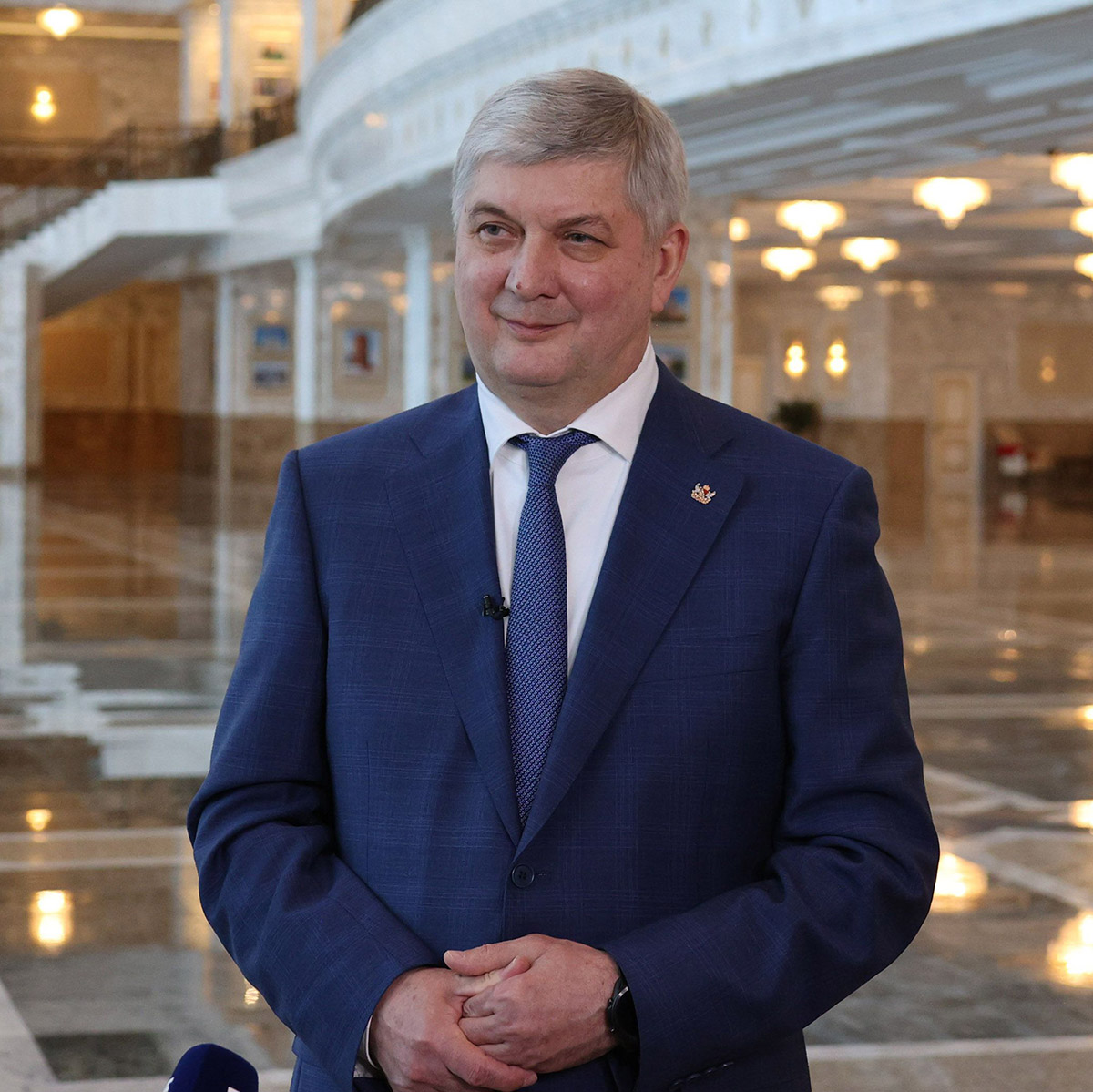 Alexander Gusev
Aleksandr Lukashenko drew the attention of Russian partners to the developments that Belarus has in modernising the transport infrastructure, “Belavtodor Holding Company successfully fulfils orders in the CIS countries. Belarus offers a comprehensive approach to repairs and reconstruction of roads, bridges and overpasses. We can do it. Moreover, we are now very much modernising in this direction in Belarus... If you need it, you show us the place, we come, we do it, we hand over these facilities to you on a turnkey basis.”
According to the President, our country is ready to supply all kinds of passenger, municipal and agricultural equipment. For Russia, this is especially relevant now, given the withdrawal of Western companies from the country. Thus, the broadest opportunities are opening up for our countries, which will allow Belarus and Russia to become even stronger.
Aleksandr Lukashenko noted that he had always asked the Russian leadership not to get involved with westerners, “You don’t have to depend on them like that. We must offer them our conditions.”
The Head of State emphasised that Belarus got large industrial enterprises after the collapse of the USSR. We carefully preserved the Soviet heritage, did not destroy and break everything, did not rush into the maelstrom of the wild market and did not sell off assets for next to nothing. Gradually, step by step, the state modernised and improved what it had. As time has shown, it was a strategically correct decision. Today, almost all Belarusian products are in demand on the world market. Aleksandr Lukashenko cited BELAZ as an example,

“Such a school! The town was built near the factory. Today, BELAZ accounts for more than 30 percent of the world market. Huge Russia, Kazakhstan and Uzbekistan are asking us to supply them with BELAZ vehicles. We supported the level that was created at that time and turned out to be in demand on international markets.”

According to Aleksandr Lukashenko, since there is a huge demand for cars, tractors, machine tool building, other enterprises that are less involved should be involved in import substitution, “We are not facing such big problems with import substitution as Russia. You relied too much on others giving preference to German and U.S. equipment. Their products were three times as expensive, and now you have none of them at all. This is where this practice of relying on partners has led you to.

Western countries are a sort of partners who will not stop at anything until you are on your knees. We are ready to co-operate with Russia on any front today.”

“Belarusian companies are ready to supply all kinds of passenger, municipal and agricultural equipment to Voronezh Region. Agriculture is another promising area of co-operation. In addition to direct supplies of high-quality foodstuffs to Voronezh Region, Belarus is ready to share its experience and technologies in the construction of agro-towns and industrial holdings, cattle breeding, pedigree farming and seed production,” listed Aleksandr Lukashenko.
“The housing and utilities sector means both water purification and drainage. We’re doing a lot of this now, from drainage to elevators. If our experience is useful to you, you are welcome to study it. We are ready for comprehensive co-operation,” the Belarusian leader concluded.
He personally thanked all the guests, the Russian governors, who contribute to the development of close co-operation between the two countries.

The Voronezh Region Governor thinks in the same pragmatic way: relations between Belarus and the Voronezh Region should be built on the basis of mutually beneficial co-operation. Alexander Gusev told the President that the Russian delegation has already visited the MAZ and Belkommunmash mechanical engineering companies, “The interest is mutual. Voronezh Region has been continuously developing the transport infrastructure and therefore the goods made in Belarus will be useful. I think we will sign contracts and make purchases. This applies primarily to electric transport as the basis of passenger transport for Voronezh.”
The Russian delegation also visited Alexandrov National Cancer Centre of Belarus. According to Mr. Gusev, they are now building a comprehensive system for providing care to cancer patients in the Voronezh Region, with a large surgical building being currently under construction, soon followed by a therapeutic building.
“Of course, the experience gained in the National Cancer Centre is extremely relevant for us. We’ve agreed that our doctors would come in a large group, talk, and learn something. We also saw that it was possible to purchase equipment that is manufactured in Belarus. It is of high quality, meeting the expectations and requirements of our medical community,” the Governor emphasised.
Alexander Gusev also paid attention to the trade-economic interaction between Belarus and the Voronezh Region. Last year, the mutual trade turnover amounted to about $350 million.
“Last year, we increased by almost 30 percent, but I don’t think we should be satisfied with the absolute value.

We expect that the trade-economic turnover will certainly grow. This year, we planned to grow up to 10 percent, but taking into account the sanctions, I think we have much more serious opportunities and prospects,” clarified the Russian guest.

Agreements for the future
Following the meeting, the parties signed an action plan to fulfil the agreement between the governments of Belarus and Voronezh Region of Russia on trade, economic, scientific, humanitarian and cultural co-operation for 2022-2024. The volume of mutual trade between Belarus and the Voronezh Region amounted to more than $348 million last year. A significant share of the trade turnover is occupied by the export of Belarusian goods — $217 million. At the beginning of this year, the trade turnover continued to grow and exceeded $58 million in January-February 2022. This is almost 58 percent more than in the same period of 2021.

Based on materials of sb.by and belta.by
Photos by BELTA
Belarus Voronezh economy Co-operation