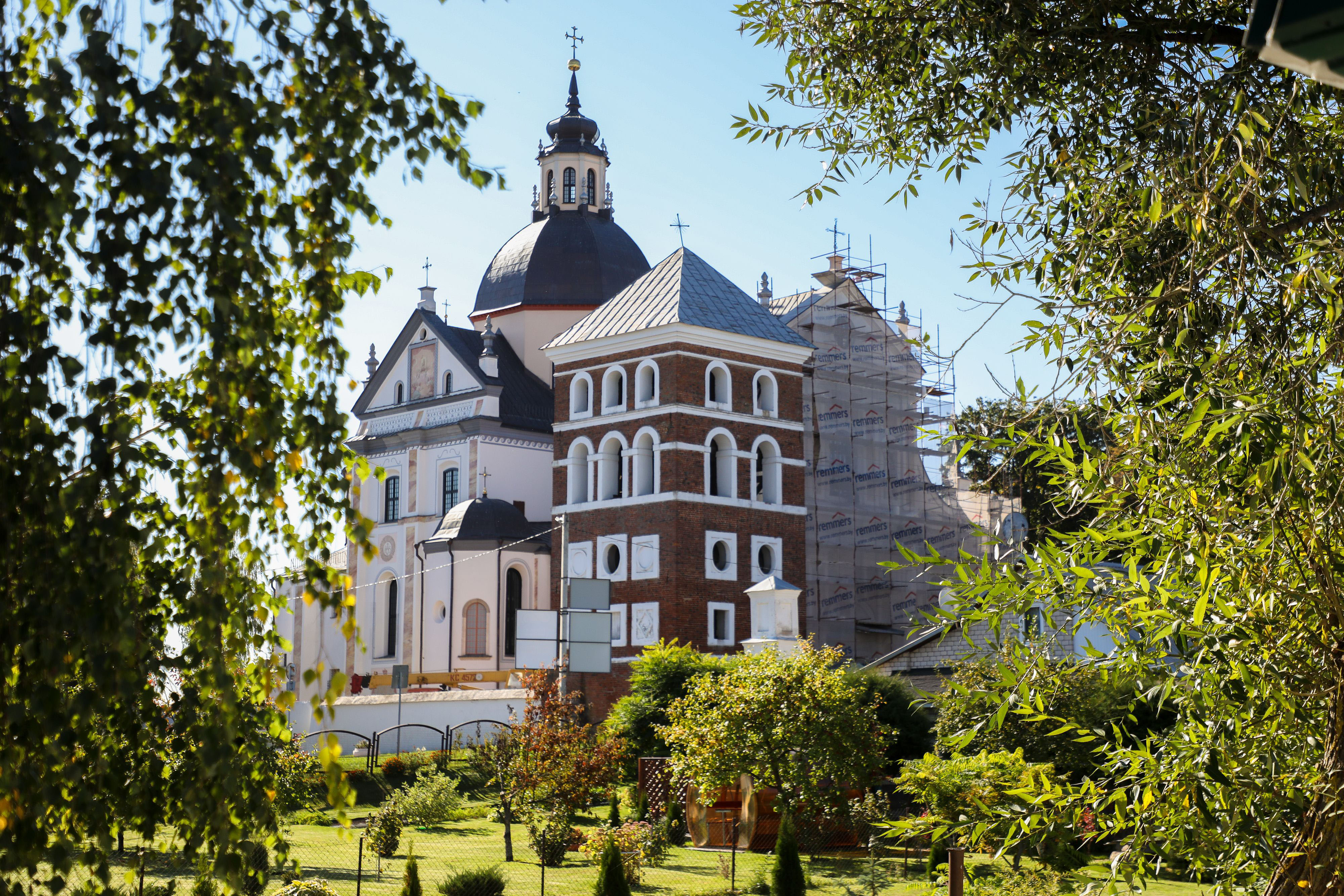 The Church of the Body of God in Nesvizh is one of the main Catholic shrines in Belarus. It’s a place with a long and very difficult history which strongly echoes that of the whole country. Moreover, it’s the first Baroque architectural monument in Eastern Europe and the Radziwills’ tomb (the princes’ incredible wealth once made it possible to invite the best architects of Europe to Nesvizh).
Over the last decade, other experts have been working here: restorers. Large-scale works launched in 2010 are now nearing the end. If everything goes well, parishioners and tourists will hardly recognise the church next year. It seems that several layers of white plaster on its central facade have hidden late 16th-early 17th centuries paintings for many years. They were later covered with 18th century frescoes and soon it will be possible to enjoy them once again. We simply need to wait until the scaffolding is removed. 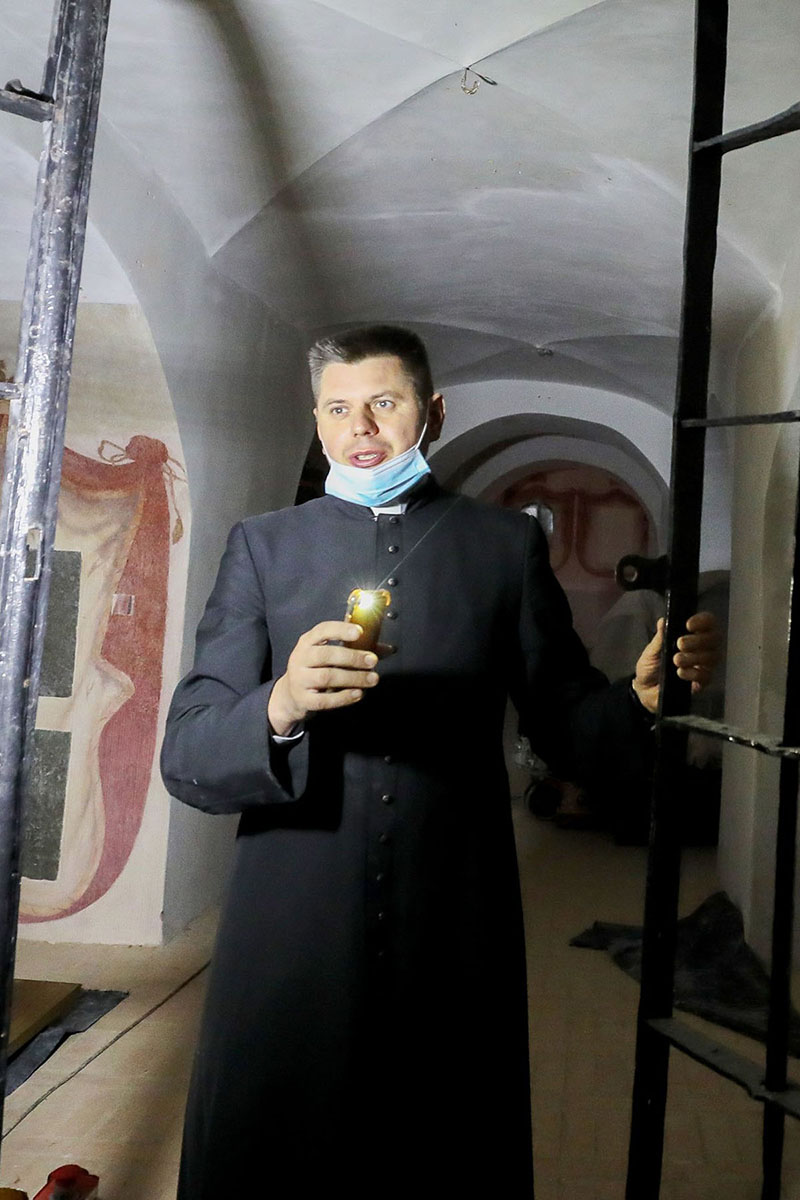 In 2010, when restoration works began, nobody imagined that the process would take so long. Moreover, the restorers could hardly imagine that their work would be transformed into a surgical operation. After all, these are different tasks: to strengthen the walls, change the roof, repair engineering networks and improve the site or to reveal fragments of numerous murals on the central and side facades.
The first exploration showed that the Belrestavratsiya specialists would have to work hard. Measurements were made, and historical and archival research started. However, historians have not yet found an answer to the main question: why this beauty has been hidden from prying eyes for several centuries.
Prior Piotr Sharko suggests, “Probably, they wanted to preserve the church in this way. The early 19th century inventory books mention multi-coloured paintings. The facade was whitewashed, most likely, after 1812. The then owner of Nesvizh, Dominik Radziwill, fought on the side of Napoleon and many heraldic Radziwill symbols were preserved on the outer walls of the church. Therefore, it was decided not to attract too much attention to it and simply paint over those murals — out of harm’s way. As a result, the Roman Catholic Church became less noticeable of course but has survived until modern times. Happily, the murals have not suffered much over the years.”

The Prior is tired of telling people why the restoration works have continued for so long. “In 2010, a state investment programme was adopted; it planned the church’s reconstruction. Each year, a certain sum is allocated from the regional and Republican budgets for a certain amount of work. Another thing is that all restoration works should be subject to modern general construction standards. However, this doesn’t work with architectural monuments (especially those protected by UNESCO) since their historical appearance can change dramatically. Therefore, it is necessary to submit the issue for consideration: how reasonable is it to adjust a 400-year-old church to modern building codes and regulations? Of course, it’s important and necessary to comply with fire and other regulations. However, we should not cross a certain line,” he explains. 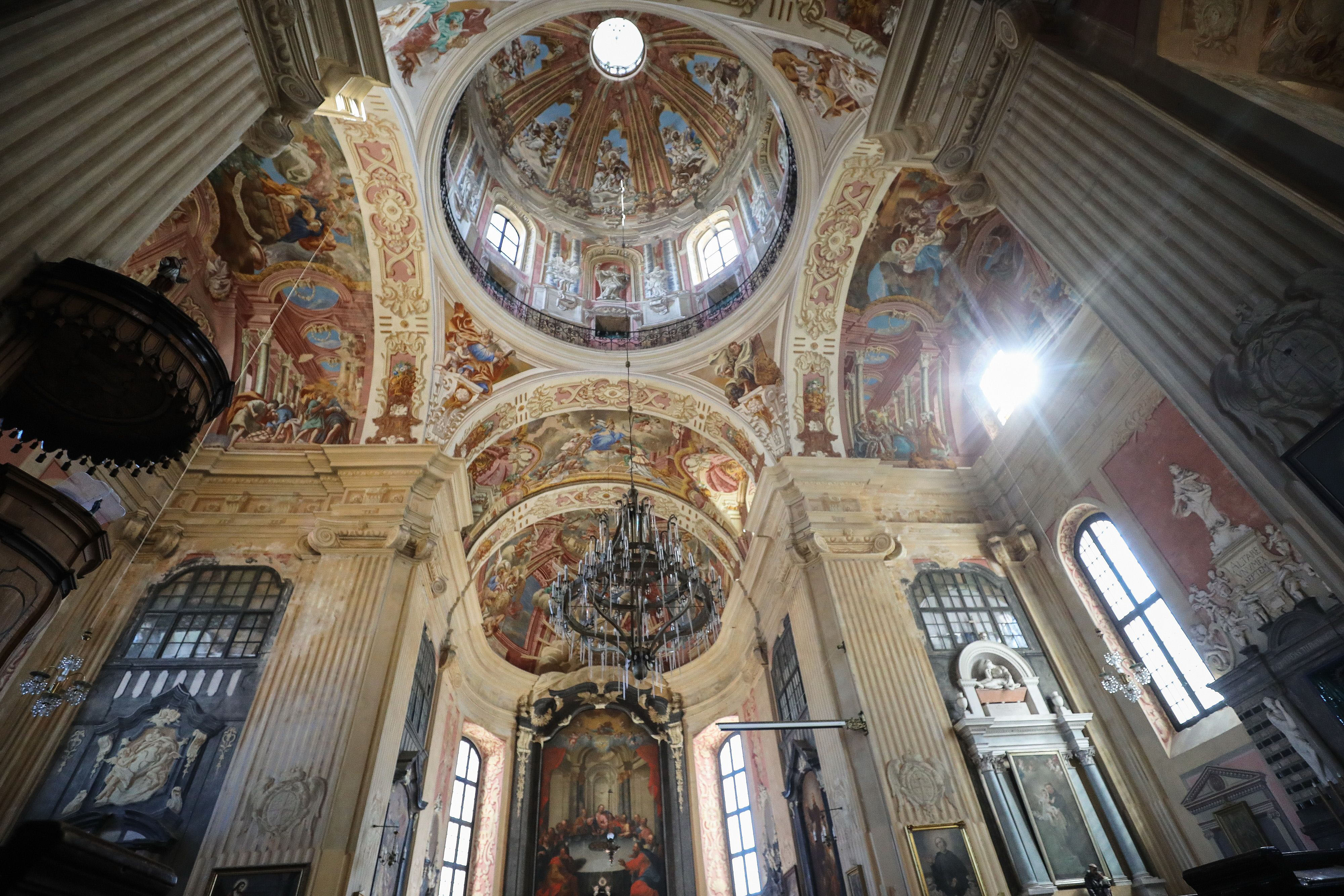 As the Prior recollects, a decade ago, the main problem that needed an urgent solution was the roof. Overall, it had not been repaired since 1944 when it was restored after a fire from an artillery shell. Only minor repairs were carried out. “With this in mind, we addressed the Culture Ministry. Our request was met, and the church was included in the investment programme. Within a year, builders replaced the dome, and it took them two more years to restore all other sides and naves,” he adds.
After completing the roof, workers focused on facades: the sides and facades of the altar part were updated. Then engineering networks (water pipes and sewers) were repaired, and the site around the church was landscaped.
Piotr Sharko says, “Of course, it’s much easier to build a building from scratch than to reconstruct a 400-year-old one. Rough work requires large financial costs: dismantling, clearing, garbage removal. However, we’ve done most of the work by now, thank God.”


Front for the organ 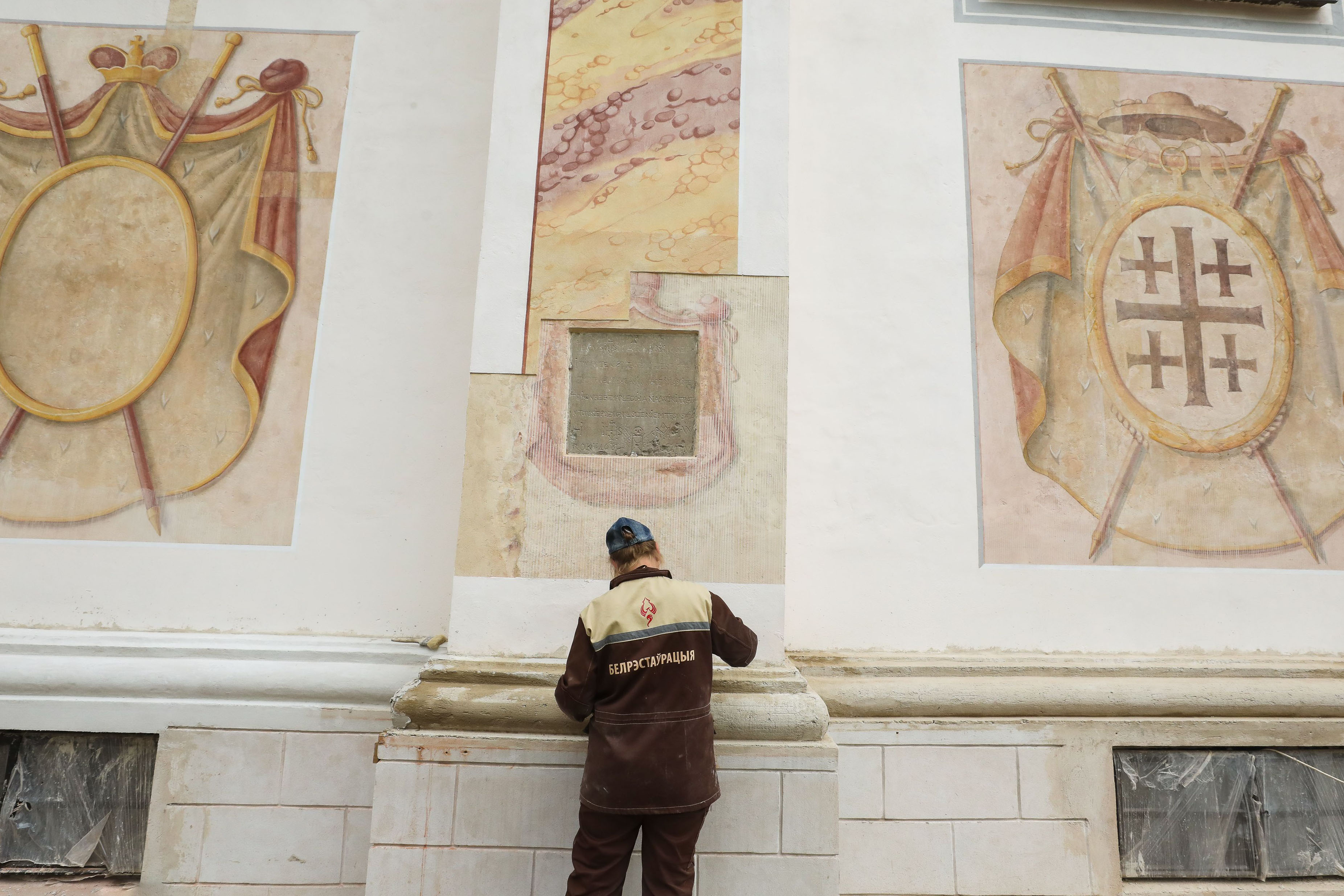 Three years ago, the Nesvizh church was covered by the media when the underground tomb of the Radziwill family was heavily flooded with water. Speaking of the present affairs, the Prior notes, “The general works are coming to an end. However, there are still issues with electricity. Experts didn’t recommend we put supports in the vaults so there would be no collapses, so they were only strengthened and plastered. For a long time, we couldn’t figure out how to comply with building codes, and not to harm it from the point of view of historical compliance. Moreover, in the coming days, we are replacing the steps leading to the crypt: the old wooden ones are completely rotten.” 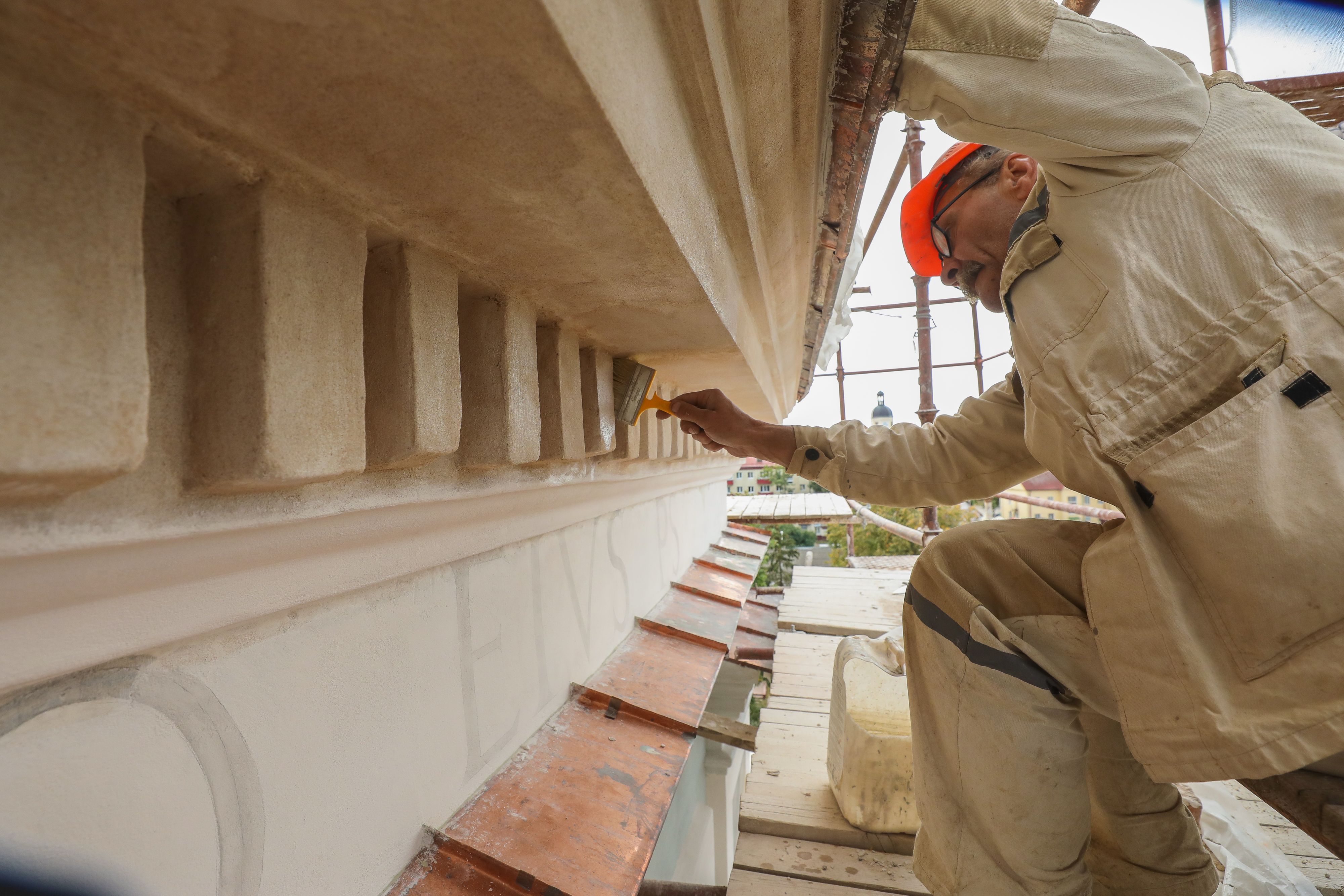 Without financial assistance, restoration of the organ will not be completed soon. Its renovation is not included in the state programme and previous works (cleaning, tuning, replacement of stops) were carried out at the expense of donations from parishioners and patrons. Thanks to the latter, a few years ago, the instrument also got a new German electric motor. However, the Nesvizh organ still doesn’t have a beautiful front.
“We thought of ordering a front in Riga. A school operates there and its masters carve altars. They could make a facade for our organ. However, while the borders are locked and the coronavirus is continuing, I can’t go there to negotiate,” says the Prior.


Construction work will soon be launched in the belfry and St. Roch Chapel which is also known as the Bulgarin Chapel