Relax in the outback: what fascinates tourists is the old noble estate in the agrotown of Krasny Bereg

One need to move away from the city in order to take a break from the hustle and bustle, to feel all the delights of rural life. The agrotown of Krasny Bereg in the Zhlobin District invites one to plunge into a real fairy tale of an old estate, the history of which goes back five centuries. The building has survived to our time almost in its original form, despite the wars and hard times. 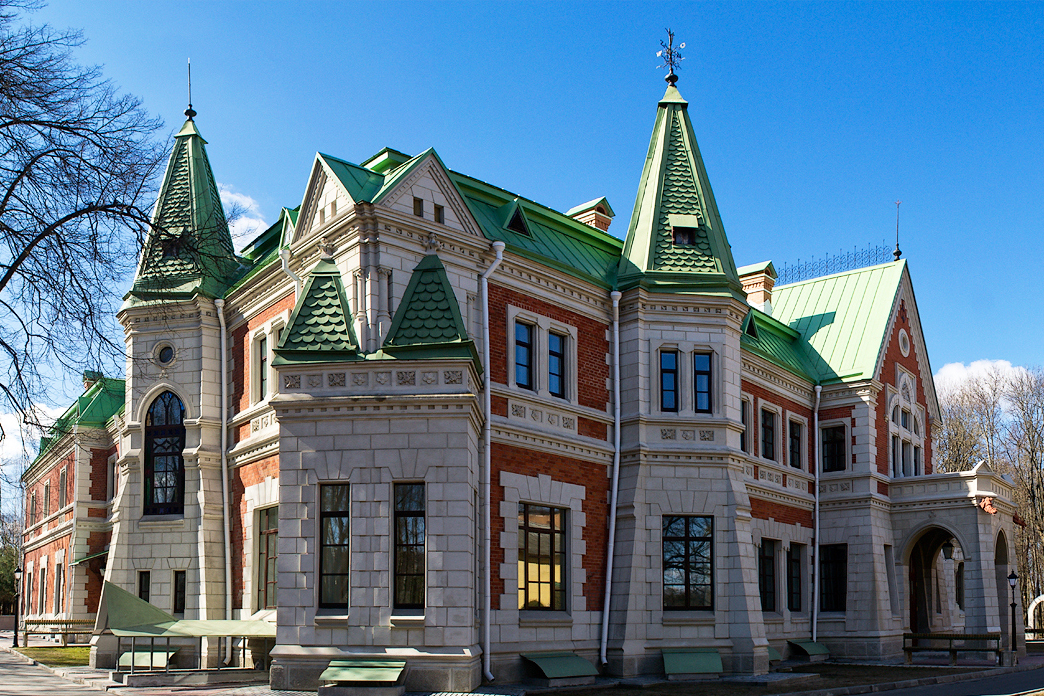 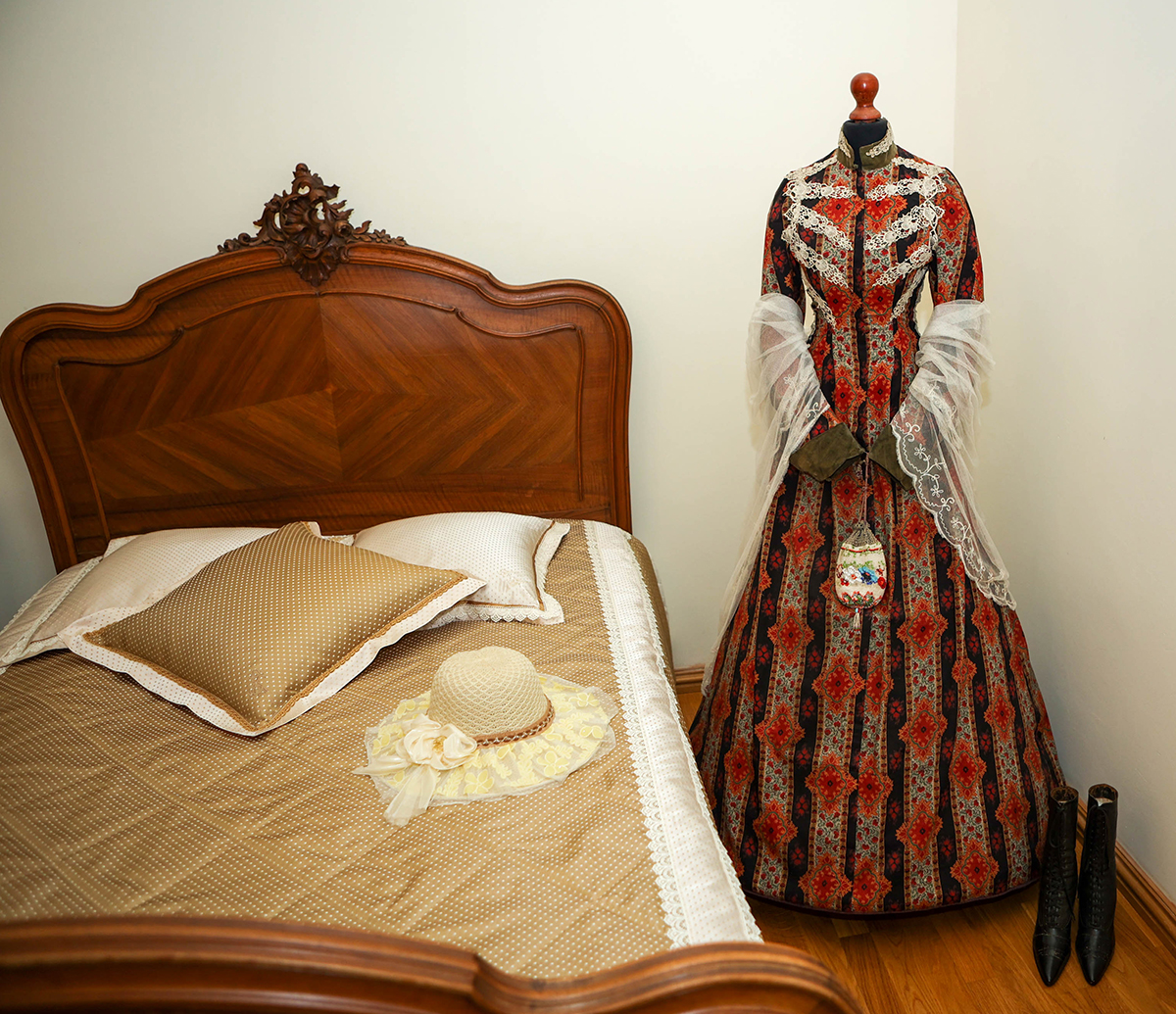 It’s not so easy to reach the Koziell-Poklewski estate for tourists. Only one who longs for a meeting with the beautiful is able to find the way to it. Krasny Bereg State Agrarian College is the main landmark. There is an amazing heritage site on the territory adjacent to the educational institution.
At the entrance, a textured fence made of bright red brick immediately catches the eye, which gives the fence a special flavour. We pass through the big gate. Fifty metres — and in front of us is not a house, not a mansion, but a real palace in miniature! White-pink shades of the walls immediately give rise to associations with a confectioner’s house made of icing on top of a Christmas cake. It seems that now its former owners will come out onto the porch and say: ‘Welcome to the fairy tale!’.
A truly magical atmosphere, both mysterious and mystical, reigns in the magnificent halls. The figures of chimeras alone on the facade of the building are worth something! Apparently, the former owners thus wanted to drive away evil spirits from the snow-white walls of the two-story palace.
Centuries ago, many noble people owned Krasny Bereg. But the heyday began in these places, when a military engineer, Lieutenant General Mikhail Gatovsky, decided to build a chic manor house. To implement the idea, he invited the professor of architecture of the St. Petersburg Academy of Arts Viktor Schröter. According to his project, a huge mansion was built. 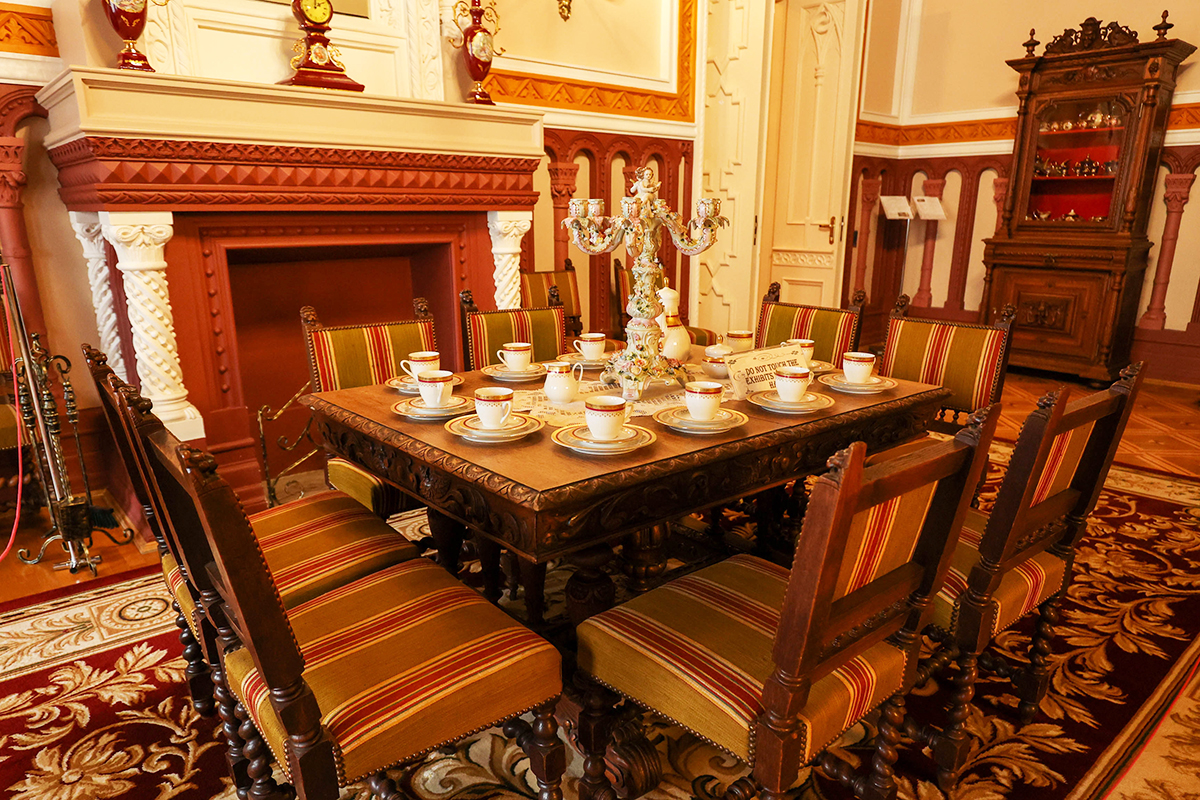 After the death of the owner, the rights to the house passed to his daughter Maria. Having married, she actually transferred ownership of the estate to her husband, a prominent Russian nobleman, philanthropist and public figure Koziell-Poklewski. Their family had numerous mansions in the Urals and Siberia. The house in Krasny Bereg served as a dacha where the owners liked to relax with their children and friends.
We go into the first room. Mannequins in beautiful puffy dresses, miniature shoes, a hat, lace on bedspreads and pillows create the atmosphere of a dollhouse.
“The dress is genuine, it was really worn by beauties in the 19th century. It is noteworthy that if today the female model parameters are 90-60-90, then here the waist circumference is only 50 centimetres! This outfit was presented to the museum by the collector Igor Sukmachevsky,” says senior researcher at the museum-estate Maria Tkacheva.


Mystery of the big closet 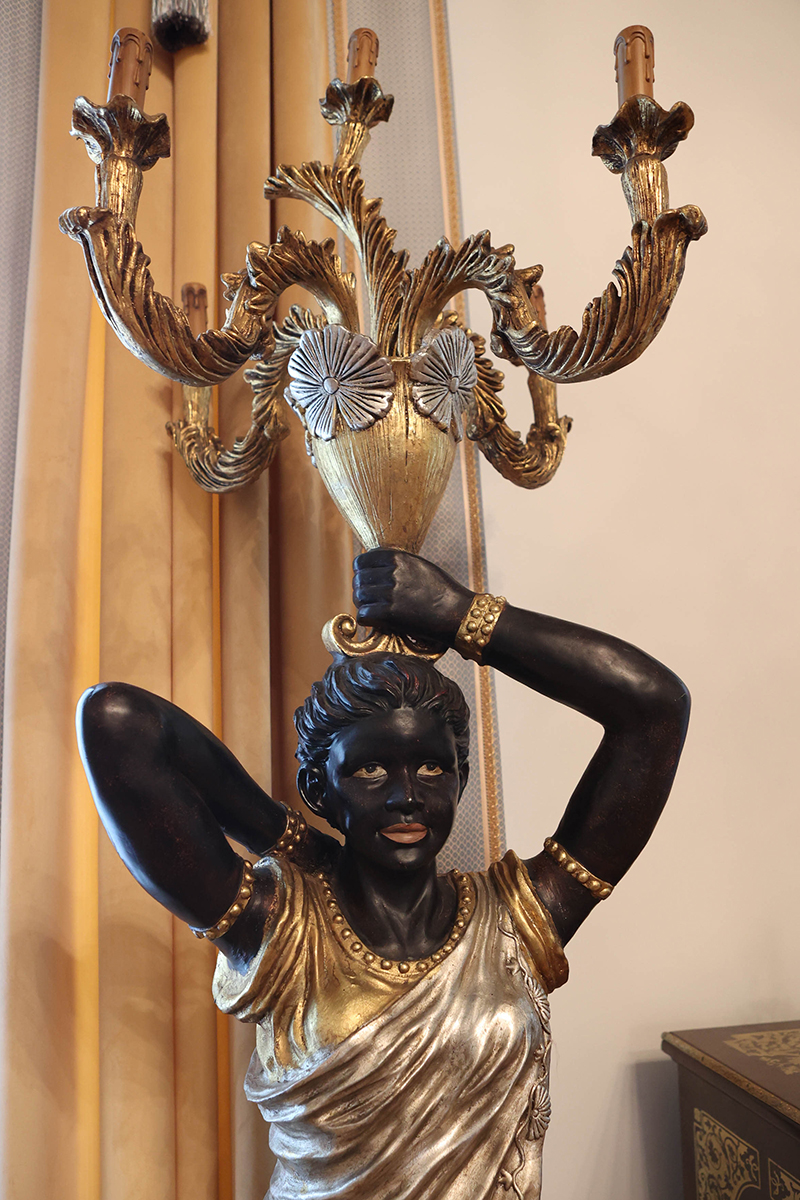 We pass along the corridor — we find ourselves in the boudoir of the hostess in the style of classicism. In the room for her solitude, Maria Mikhailovna could sit at a table, write a letter to relatives, read a women’s newspaper. By the way, entering the hostess’s room, one can see a genuine newspaper of 1901, which was brought to the museum from Europe by one of the visitors.
The central place in the boudoir is occupied by a large closet — a true piece of art. Made in the marquetry style, it is a kind of inlay, surface finishing by gluing decorative veneer elements onto a wooden base. The hostess attached great importance to the interior decoration of the cabinet: velvet inserts, a massive lock, floral decor.
We pass into one of the living rooms. Here the whole family gathered at a large table by the fireplace. Today in the room one can see portraits of the former owners of the house and the architect who created the magical beauty. Every detail emphasises the wealth and status of the owners. Interior items, even the sofa and armchairs, are decorated with porcelain medallions.
The tea set made of porcelain by the first manufactory in Europe, Meissen, founded in 1710, is particularly impressive. Chic candlesticks, tureens, spice sets, and a huge mirror in a massive wooden frame — all this creates the atmosphere of a royal palace.


Authenticity as it is

What catches the eye in most halls and living rooms is the chic ceilings, even trimmed with gold leaf. The decor in the form of twisting vine branches is mesmerising. It is amazing how this beauty has retained its bright colours over the centuries.
One of the highlights of the estate is a high degree of authenticity. Here, not only the facades of that time, but also the interior decoration were miraculously preserved: stucco, forged products, fireplaces, paintings, carvings. Thanks to the collector, who provided interior items of that time for the exhibition, the halls ‘spoke’ in the language of the 19th century. 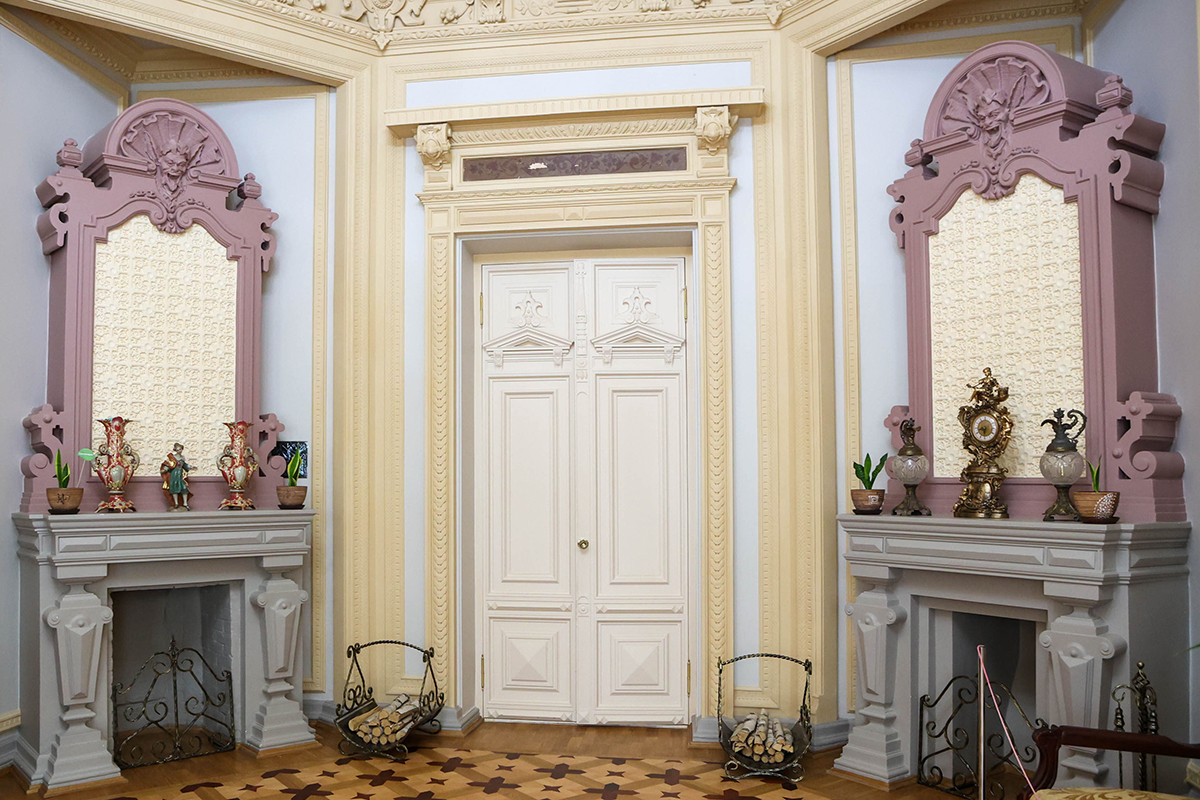 Here is the owner’s office. There, expensive writing sets, clocks, and a library are set up in a serious way. The owner’s original books have not been preserved. Instead, visitors can see rare publications from the collections of the National Library of Belarus. A unique exhibit is a real album for photographs of the early 20th century, donated to the museum by Galina Levina, daughter of Leonid Levin, the architect of the Krasny Bereg memorial in memory of the child victims of the Great Patriotic War. 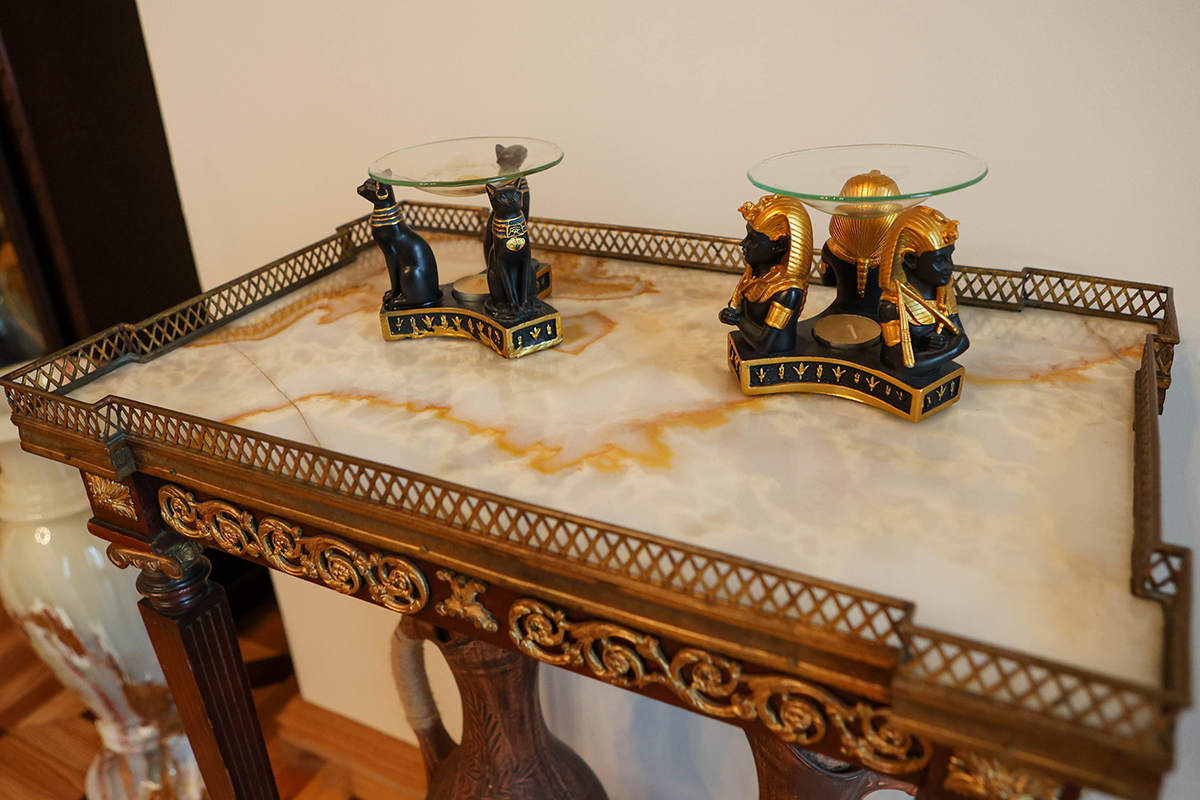 One can literally bathe in luxury in the rococo hall. Fabulous decor, paintings by Richard Tuccat in gilded frames, walls with figurines of flowers and grapes, birds and dragonflies give a feeling of celebration and solemnity. By the way, the palace originally had 36 rooms. And each has its own style — Gothic, Romanesque, Classicism, Empire and Art Nouveau, Baroque, Rococo and Mannerism. The owners collected them all. Today one can see the only museum hall in Belarus in the rare Arabic Alhambra style. Vincent Koziell-Poklewski loved travel and the exotic. Dark-skinned mannequins, African amulets and even camel figures — all this was necessary for the owner in order to impress frequent guests.
The peculiarity of the Gothic hall is a lot of amulets encrypted in the decor elements. Above the fireplaces are oak leaves, doors bordered by figurines of fluttering butterflies. We notice the symbol of Christianity — a branch of grapes, shamrocks — symbols of the Holy Trinity. It turns out that religious hosts thus created a feeling for the guests: when they come to the house, they fall under the spell of the Lord.
In the winter garden, located right in the building of the mansion, there is a special atmosphere of love and warmth. And next to it is a music hall, where real balls in retro style are held these days.

After the 1917 revolution, the estate housed an agricultural school.
During the Great Patriotic War, the estate building itself was not destroyed and was used as a hospital, so the palace and its interior decoration were well preserved.