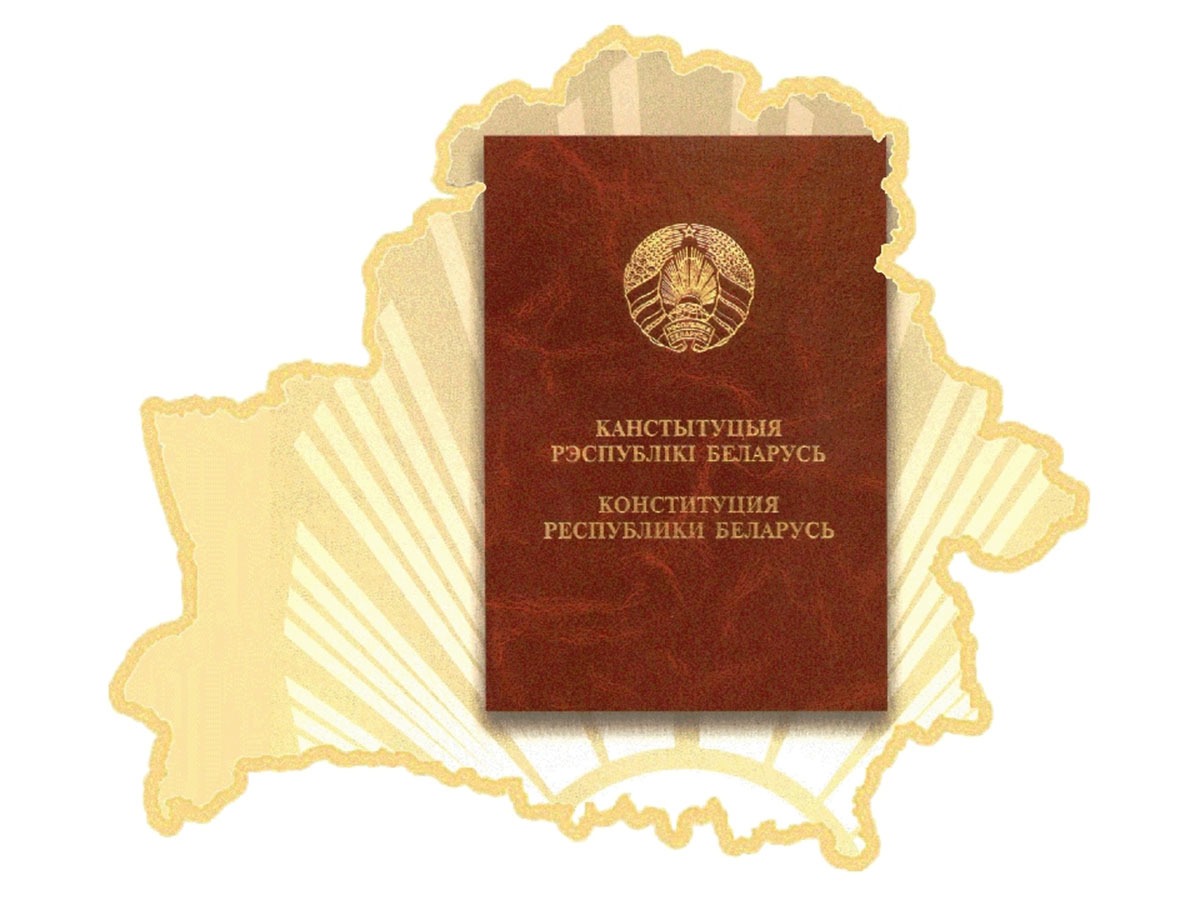 Public reception and dialogue platforms for discussing the draft amendments and additions to the Constitution continue to work throughout the country. The nationwide discussion was another confirmation of the maturity of civil society.


Dialogue platforms for discussing the draft amendments and additions to the Constitution are held on the basis of cultural and educational institutions, various public associations. But the most massive ones are based on the country’s industrial enterprises. They, as well as various public receptions and hotlines opened throughout the country to discuss the draft Constitution and collect proposals, have one thing in common: Belarusian citizens study the proposed draft amendments and additions to the Constitution with interest, actively make their proposals and corrections.

Chairwoman of the Council of the Republic of the National Assembly of Belarus Natalya Kochanova spoke about this during her visit to the Minsk Bearing Plant and a meeting with its workforce. 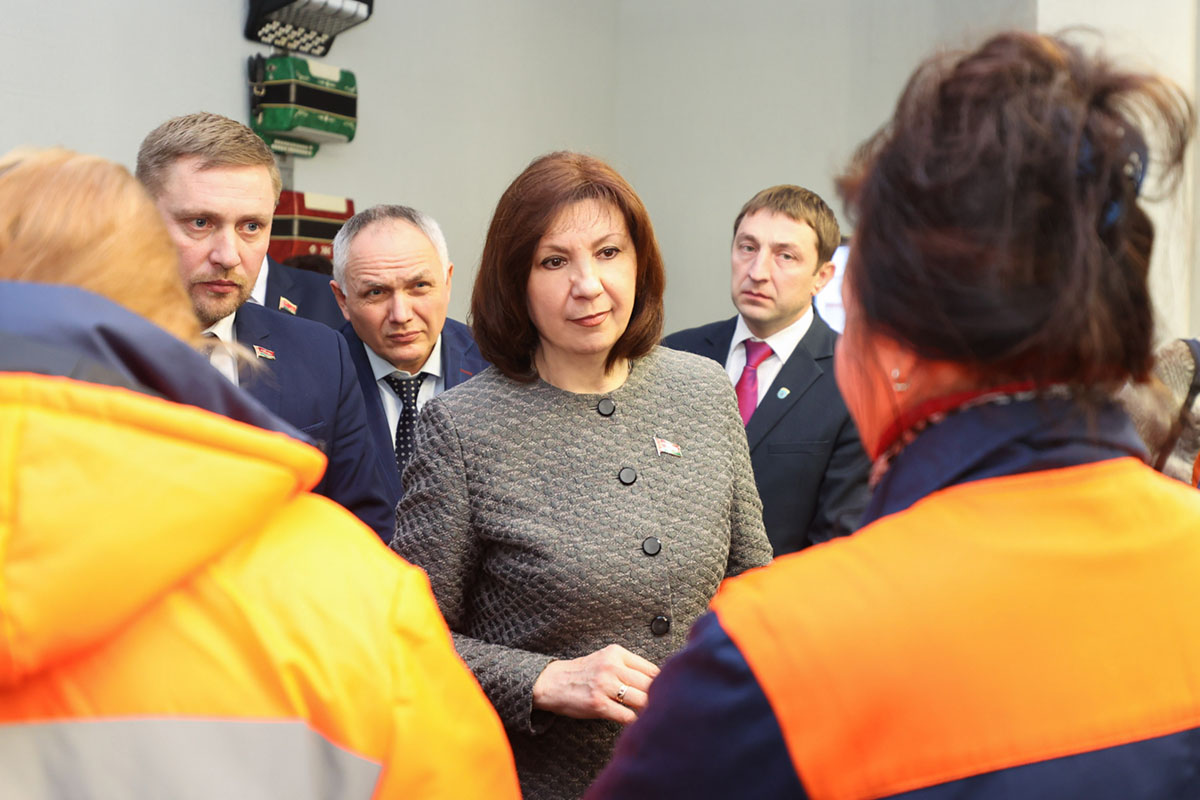 Natalya Kochanova at the Minsk Bearing Plant
Photo by BELTA


Speaking about the work on the draft amendments and additions to the Constitution, the nationwide discussion of which is taking place these weeks throughout the country, Natalya Kochanova noted that the senators are deeply immersed in this work, “Members of the Council of the Republic are members of both the Constitutional Commission and the working group to finalise the draft Basic Law of our country. Now we take an active part in meetings with labour collectives, with citizens — a public reception has been organised under the Council of the Republic, through which people turn to us on issues of making changes and additions to the main law of our country. There are many questions, but the most important thing is that people are really interested. They study the draft with interest, make their suggestions and adjustments.”
And there are quite a lot of such proposals, added the Speaker of the upper house of the Belarusian Parliament. Natalya Kochanova named the main ones,

“Most of all appeals from citizens come under articles on social support. They remained unchanged, only expanded, for example, in matters of support for families and the disabled. For many, it is also important to consolidate the concept of marriage between a man and a woman — the population is in favour of preserving traditional values.

They also ask about items related to maintaining health. By the way, people asked for a ban on the privatisation of large city-forming enterprises in the Constitution. For many, it is important that the factories remain in the ownership of the country.”

Head of the President Administration Igor Sergeyenko took part in a meeting with the activists of the Grodno Region on the topic ‘Constitution. Discussion. Referendum’. 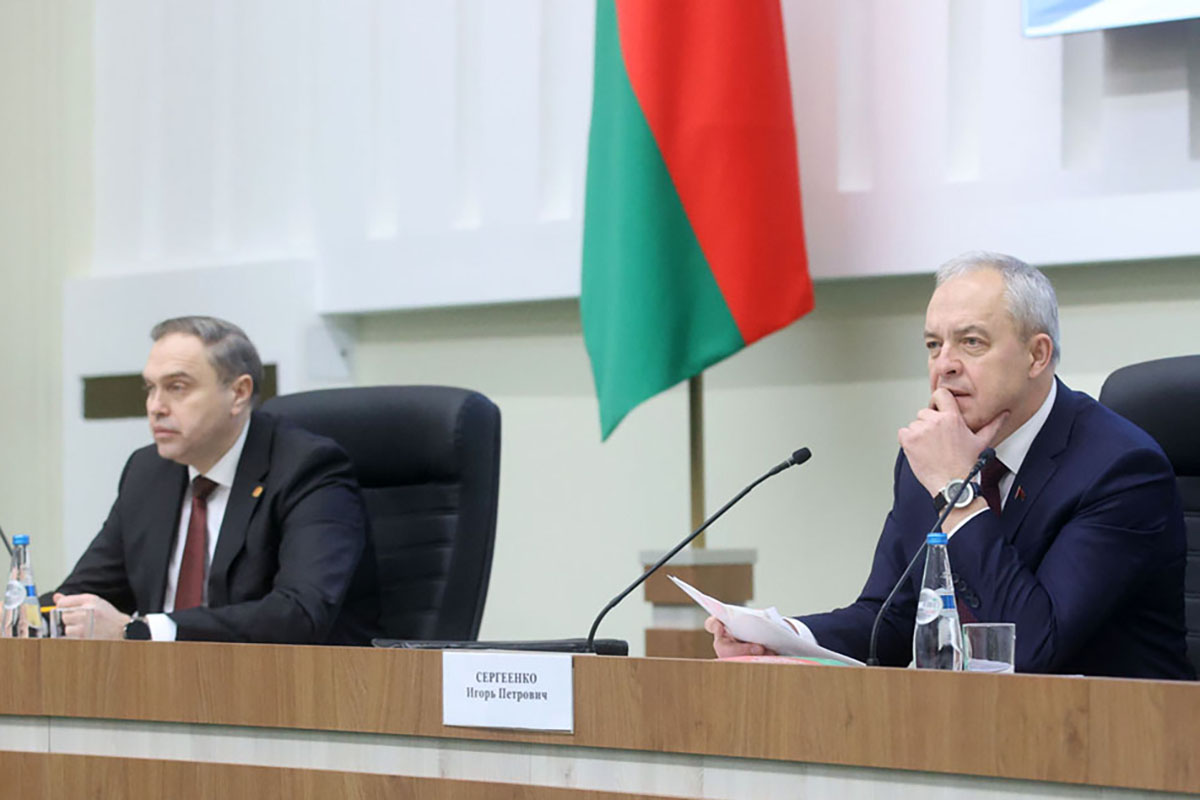 Igor Sergeyenko at a meeting with senior officials
of the Grodno Region
Photo by BELTA
“An analysis of the events held in the country to discuss the draft Basic Law showed that in the Grodno Region they approached this work in an organised and non-standard way,” Igor Sergeyenko addressed the audience. “Especially at dialogue platforms, in labour collectives of enterprises and organisations, educational institutions. The main task that the President has set before us is to prepare for the referendum as soon as possible.”
The first days of the discussion showed a significant interest of our citizens. In the first five hours alone, more than 70,000 views were recorded. A little less than 5,000 different responses, recommendations, proposals from state bodies, individuals, and collectives were received.
A number of proposals are constructive and will be summarised in the next few days. It is worth noting that the basic cornerstone provisions of the Constitution are not rejected by an absolute majority.
“At this stage, it is important not to turn the work on updating the Constitution into a formality, not to hold events for the sake of appearances,” Igor Sergeyenko addressed the audience.

“It is necessary not only to bring and explain the information, but also to get feedback, to organise a discussion. In the process of communication, you need to go out to discuss topical topics.”

With an eye on the future

The First Deputy Head of the Belarus President Administration, Maksim Ryzhenkov, and the Chairman of the Board of Znanie (Knowledge) Belarusian Society Republican State Public Association, Vadim Gigin, met with students of Brest State University named after A.S. Pushkin. The conversation was lively and casual. Young people, not embarrassed by authoritative speakers, asked questions on various topics: from the need to preserve historical memory to increasing the social responsibility of every citizen for themselves, their health and their country.
Maksim Ryzhenkov positively assessed the genuine interest of students in the processes that are taking place in Belarus, including amendments to the Basic Law,

“The Constitution is turned to the future, it consolidates the transformations achieved in our country and builds a strong configuration of public administration for the future. The principles that form the basis of the document are aimed at changing life for the better, so that people, especially young people, can reveal their potential and realise themselves in our country.”

He noted that the discussion of the document is of a large-scale and nationwide character; never before have so many people been involved in the development of fateful decisions. 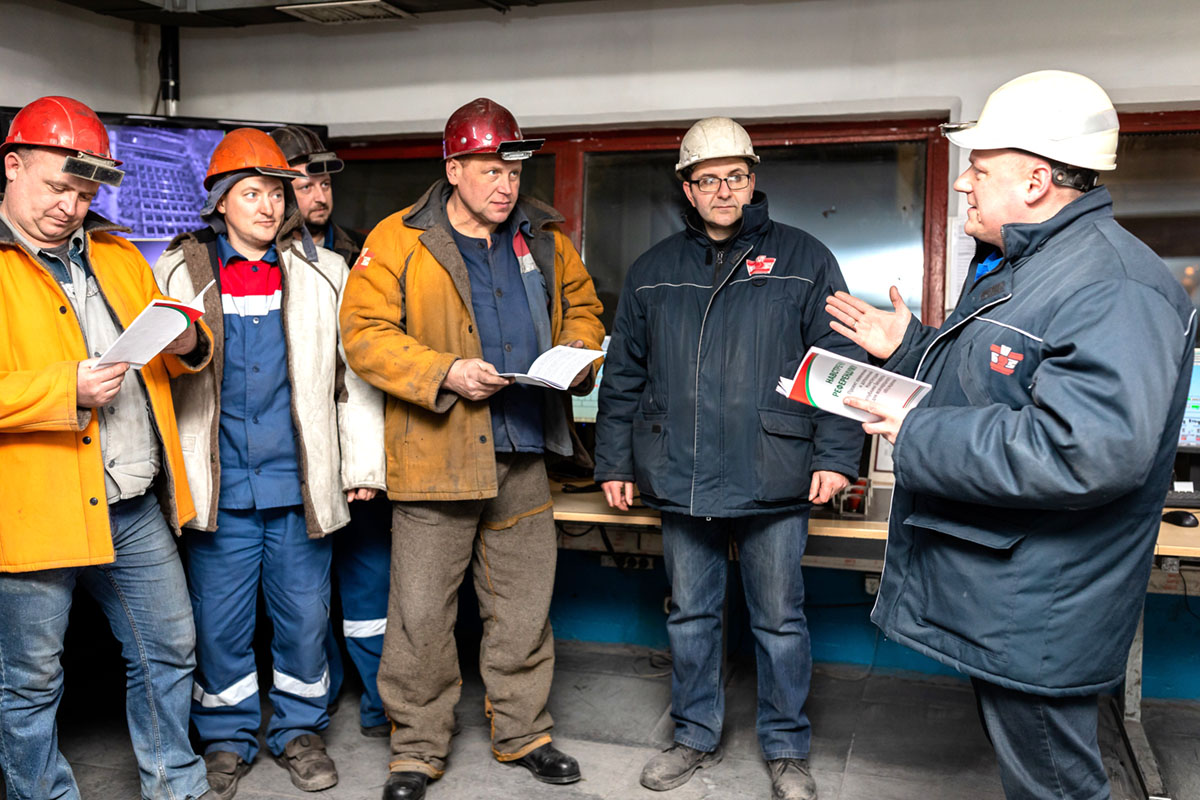 Dialogue platforms are being held these days in many labour collectives.
Discussion of the draft Constitution at the Belarusian Steel Works
Photo by Ivan Yarivanovich

University students shared their impressions after the meeting. Thus, Kirill Keda, a 2nd year student of the Faculty of History, says, “It is very important that according to the Constitution, the state promotes the development of young people, creates conditions for their participation in public life. I also liked that today we talked about the preservation of historical memory, especially about the feat of our ancestors during the Great Patriotic War. Belarusians should remember these events in order to continue to protect the sovereignty of the country.”

OPINIONS
Oleg Slinko, member of the Standing Committee of the Council of the Republic on Regional Policy and Local Self-Government:
Opponents of positive changes are trying to escalate the situation, convincing Belarusians that the high status of the Belarusian People’s Congress is, in fact, the birth of a new representative body, which in the future may lead to dual power. But this is far from being the case, because this mechanism has been successfully functioning for more than a year. At the legislative level, it is proposed only to assign to it the powers that the Belarusian People’s Congress already has. Its main task will be to develop and approve the directions of the country’s development for the next five years. I have repeatedly taken part in the work of the Belarusian People’s Congress, I was impressed by its scale and have a positive view of the work of this body of people’s power.

Dmitry Murashko, Chairman of the Gomel Regional Organisation of the Belarusian Trade Union of Construction Workers and Building Materials Industry:
Changes are being actively discussed, and I am glad that all of them are primarily aimed at the benefit of people. Particular attention is paid to the preservation of the historical memory of the Belarusian people and their role in the Great Patriotic War. And one of the key points, in my opinion, is that the updated Constitution will consolidate the duty of the state to provide citizens with free education and medicine and, in general, focuses on human life and health. Among the main activities of trade unions is the promotion of healthy and safe working conditions. And I hope that the new Constitution will spur employers to be even more active in maintaining and strengthening the health of their employees, because a healthy person is the future of the country.

Igor Borisenok, resident of Molodechno:
I propose to introduce the following wording of the national idea into the updated Constitution: ‘FAMILY — UNITY — FATHERLAND!’ The family is the basis of the present and future of Belarus, as well as of every country, every society in the history of mankind. The protection and support of the family must become a common cause on a national and international scale. Unity — of all citizens in the name of the protection and prosperity of the state, cooperation for the good of our native Belarus. Fatherland is the historical, spiritual and cultural roots of the nation, the Fatherland needs each of us. Only together can we resist external and internal threats. In addition, I consider it necessary to make a number of changes and additions, including changing Article 33 of the current Constitution (‘censorship is not allowed’): it is necessary to allow moral censorship of the media. I think that raising children, young people without moral censorship of the media is like throwing grenades into your own yard.

Rita Kundikova, parent-teacher of a family-type orphanage of the Department for Education, Sports and Tourism of the Klichev District Executive Committee:
I support amendments to the Constitution, especially in the part where it comes to family values. Article 32 added a provision that the state provides support to families with children, orphans and children left without parental care. This is an important point. Our family-type home turns 32 on January 25th. I see how the attitude in society towards parents with children has changed over the years. Remember how many boarding schools and orphanages used to be! And now the kids get into a family where they are surrounded by love and care. After they graduate, they are also not left to fend for themselves. My children (I raised 47 children, the eldest are already under forty) got the opportunity to solve the housing problem with state support. It is difficult to imagine how much money is spent from the budget for these needs. But this is a really important item of expenditure.