The new Stadler Plant was solemnly opened in Fanipol, near Minsk

The new Stadler Plant was solemnly opened in Fanipol, near Minsk

The new Stadler Plant was solemnly opened in Fanipol, near Minsk. 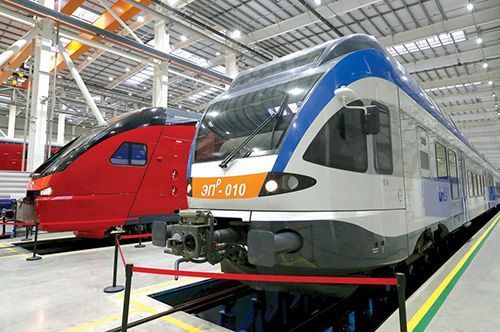 Some time ago, I came across a photo-report dedicated to new Moscow Aeroexpress trains, in a popular blog. I’d previously heard of these carriages but had to admit that the shots of super-modern and super-comfortable double-decker trains were truly impressive. However, seeing them before my very eyes was another thing altogether. The first three trains have been supplied to Moscow by Stadler Company, from its plant in Switzerland. Meanwhile, the next 25 will be manufactured in Fanipol, near Minsk, which recently hosted a solemn opening ceremony for the new Stadler Plant, attended by the President.

The ceremony was held at the plant workshop which confirmed the production level and culture. Truly, the atmosphere was comfortable: a check-room, a stage, places for invited guests, stands with tea and coffee and national Swiss sweets wonderfully matched with the spacious and light room. Actually, there was an impression that everyone gathered at the reception hall rather than at the factory. No characteristic smell was in the air as well — although the newly painted carriages stood nearby and the assembly process did not stop.

All those present were impressed by the quietness of the new train, which Mr. Lukashenko boarded, alongside Stadler Head Peter Spuhler, to travel to the official ceremony venue, within the plant workshop. It was almost hard to believe that assembly continued nearby, as there were no unpleasant smells, despite the newly painted carriages being beside those gathered. The spacious room itself was comfortable, including a place to hang coats, a stage, seating, and stands serving tea and coffee, as well as national Swiss sweets.

The Fanipol facility has been constructed in a short period of time, with the first stone laid just two years ago. Now, it’s ready to fulfil a major contract for Russian Aeroexpress. New orders are in hand, so the facility has been designed with expansion of its range in mind.

The President sincerely thanked Mr. Spuhler for his hard work and exemplary partnership: qualities not to be taken for granted.

Stadler’s work in Belarus has been a perfect investment example of injecting cold hard cash into the country: constructing a factory and sharing the latest technologies. In addition, it already enjoys healthy sales markets and is gradually expanding them. Minsk advocates such an approach and, according to the President, will view the factory as its own — rendering support as it would to a Belarusian company. Mr. Spuhler is appreciative, seeing the factory as ‘a sign of progression rather than recession’.

Stadler’s investments into the Belarusian economy are a wise response to modern economic challenges: in times of economic disturbance, solidarity is more useful than sanctions. Only joint efforts can help overcome objective global problems.

“I’m convinced that our production premises in Belarus will become the foundation for expansion of collaboration across the Eurasian Economic Union,” notes Mr. Shuhler, the Head of Stadler Rail Group AG. He assures us that the manufacture of contemporary double-decker electric trains in Belarus is very much like that elsewhere in Europe, ensuring the same quality. He praises his good and trusting relations with all those involved in setting up the new production in Fanipol.

Mr. Shuhler is grateful to the President of Belarus, Alexander Lukashenko, for his personal support of this important project, saying, “I understand that this is more than a matter of course, so it’s very pleasant to me to have found an optimal solution to every issue.”

In line with the plan, Stadler’s partner, Belkommunmash, is to undergo further development, including staff training, to ensure that modernization is embraced in every sphere. The President has tasked enterprise heads with having their scheme for future development ready by late 2014; this is a zone of responsibility.

Western sanctions will not affect the co-operation between the European Union, Belarus and the Eurasian Economic Union, noted Mr. Lukashenko when answering journalists’ questions during his visit to the Stadler Minsk Plant.

Speaking about sanctions, Mr. Lukashenko believes they are an anachronism. “You know that it was not Europe who initiated it. Europe is suffering big losses because of these sanctions. But apparently Europe is too dependent on other centers of power for the time being,” the President noted. In his opinion, no matter how difficult it is now, the situation in Ukraine will calm down and these sanctions will be abandoned sooner or later.

“Whatever the sanctions may be, people in the West and in the East are much smarter than those who impose sanctions; they will find avenues of co-operation in all areas. It is impossible to squeeze business and hard to isolate ‘one person’ today. Such gigantic regions as the Eurasian Union and the EU will never be isolated,” Mr. Lukashenko added, noting that ties remain close. “The time will come and we will forget about these sanctions. However, before we do so, we’ll overcome them, as will such businessmen as Peter Spuhler. No one will make them abandon the investments they’ve brought here. No politician will agree to this, otherwise they are not politicians. Business will not let them do it,” the President remarked.

The Head of State underlined that its opening in the town is of special importance. “Firstly, it strengthens Belarus’ export potential and, secondly, the project will play a social role, inspiring new life into Fanipol. The town is projected to become a Minsk satellite-city — uniting suburban communities and a mechanical engineering centre, with good infrastructure and comfortable living and working conditions,” the President said.

There’s confidence in expansion of economic co-operation with foreign partners.

The Head of State is convinced that the successful operation of Stadler Rail Group in Belarus will inspire other companies. “We have many promising investment projects, which we are eager to implement, with the assistance of foreign capital,” noted Mr. Lukashenko. “Therefore, we are always ready to discuss initiatives and proposals bolstering our economy, creating modern high-tech enterprises, alongside infrastructure and new, highly-paid jobs.”

Congratulating all those present at the launch of the Stadler Minsk Plant, the President stressed, “The quality and reputation of Belarusian electric trains should be top notch, inspiring pride. We are not planning or building any secondary-level companies nowadays, since we have no need for facilities producing unpopular products. Modern markets are strong and demonstrate serious competition.”

As the President explained, Swiss Stadler Rail Group enjoys good conditions in Belarus, to set up production of modern electric trains. The company’s goods are well-known for their high quality and are definitely popular worldwide — including on demanding European markets. Stadler recently received a major order from Moscow. “The Swiss company has come here with money, new technologies and its own market: it knows where to sell its products,” noted the Head of State.