You can’t be a marginal participant 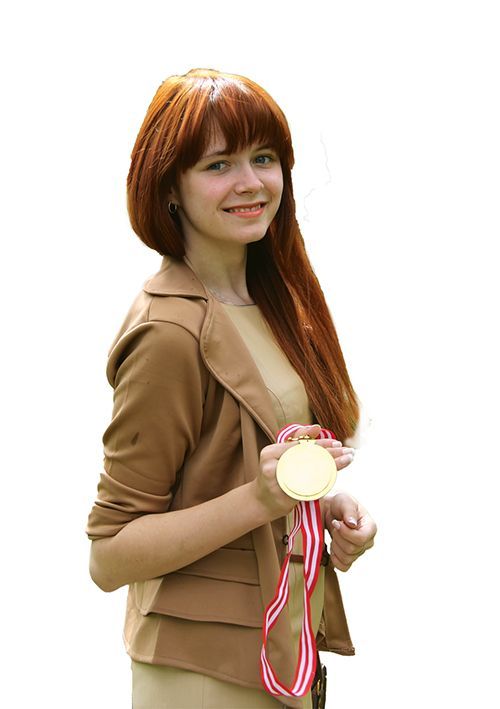 Today, she has three golden medals from international ecological Olympiads in Azerbaijan, Indonesia and Georgia. What is a secret of her success? The sphere of interests of this charming girl is researches in the field of radio-ecology and biology. In Belarusian Branch of the Russian-Belarusian Information Centre on the Problems of the Consequences of the Catastrophe at Chernobyl NPP, they say, “Khristina is able to tell about the most difficult scientific processes simply and clearly. No matter, in Russian or English. And add to that a love of science, profound knowledge in the sphere and enviable purposefulness.”

Kristina made her first steps towards science in the school centre of practical radiological culture, under the direction of her father, Gennady Pavlovich (by the way, her mother Irina Anatolievna is a teacher too). Interest in such a difficult theme did not arise from scratch. Her native Luninets District also suffered from the catastrophe at the Chernobyl nuclear power station. It is not necessary to be a statistician, the girl says, in order to see the consequences of that accident even after 30 years, “With ever increasing frequency, friends, acquaintances and acquaintances of acquaintances have a diagnosis of cancer. Having read a lot of literature, I have understood that the development of cancer is also caused by a way of life and food. For example, when summer comes, all our population actively goes into the woods for mushrooms, but the dose of caesium-137 in them at times exceeds the norm by seven to tenfold! Then I wondered if was possible to help people somehow. I set before myself a real aim — to find a way to reduce the concentration of caesium in mushrooms, and to carry out active educational work among the local population. My first research was devoted to it, and the work was carried out, not only in the centre of practical radiological culture at the school, but also at the Faculty of Biology of BSU, under the direction of my teacher, Olesya Alexandrovna Sheveleva.”

Kristina received her first ‘gold’ for this research, but she was more pleased with the fact that people had started talking about this problem. The results of the work of the young researcher were discussed at schools, at enterprises and in the local newspapers. And the girl is sure that her victory is some kind of recognition of the whole country, “Do you know, how pleasant it is to hear ‘Kali laska’ (‘You are welcome’ in Belarusian) from Mexican delegations?”

Moreover, you have another bonus — acquaintance during the international events with foreign cultures, traditions and cuisine. Kristina was especially impressed with Georgia. “There, I felt a special spirit of Christianity, an atmosphere of love and a deep respect of people to each other. In Indonesia, they have very interesting customs. Can you imagine: during an excursion across Jakarta, at a certain time the bus stopped in order that all the relevant people could pray. While Baku won me over by its architecture. Now a tree grows there, which I planted in honour of Belarus...”

By the way, the interests of the girl include not only science. She reads, reads a lot and especially likes the poetry of Akhmatova and Orthodox literature. One more secret passions of hers is dancing, in one of her video-clips on social networks, she dances waltz.

For Kristina, BSMU will become the next stage of her experiments.

After university Kristina is going to return to her native Luninets to work as a doctor. There, in a small city, she wants to help people. At school, the girl was lucky to attend training courses in the Canadian hospital, to see how cardiological operations were performed. And she will never forget the sensation of the mighty force of medicine, when you see how doctors stop and restart the heart.