Word must be honest

At a media forum in Minsk, the problems of globalisation were discussed

At a media forum in Minsk, the problems of globalisation were discussed

In Minsk, the 9th Belarusian International Media Forum entitled Partnership in the Name of the Future: Realities of the Global World was held. Representatives of 26 countries discussed at thematic panels, participated in expert-sessions, became acquainted with each other and considered new common projects — just co-operation and dialogue are the main objectives of such meetings.

The issues which have been discussed at the forum are very relevant: ‘Sovereignisation and Integration. The Eurasian Economic Union as a Platform of Creation of New World’, ‘World Communication in the Contest of a Multipolar World’, ‘Challenges and Menaces of the 21st Century and The Role of the International Community in the Prevention of Conflicts and Wars’. 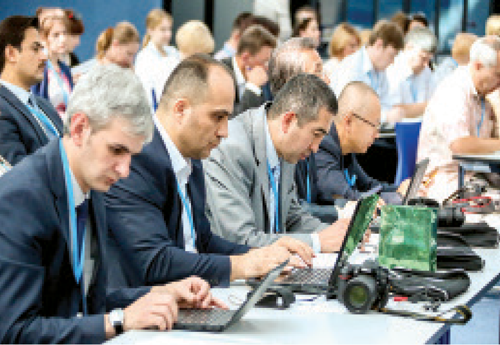 Grigory Rapota, Secretary of the Union State, who took part in the work of the forum, commented on this event. “Always, when you appear in front of people united by a common professional interest, you want to give a message, to define the issue whose discussion will help to solve the problems. Today, we are discussing the problems of globalisation. The theme is very broad. If I were asked what is interesting for me, I would have answered ‘the fact of how the Union State has to position itself in a steadily changing structure of integration associations that exist in the former Soviet Union and worldwide.’ Sometimes it’s difficult for average people to puzzle out the mosaic of existing integration formations. Currently this theme will arouse interest because of the appearance of the EAEU.”

About 500 participants of the forum are the heads of news agencies and web portals, editors of newspapers and magazines, reporters and press secretaries, TV presenters and broadcasters, as well as political analysts, historians, social scientists and economists from various countries of the world. So it’s natural that opportunities of objective delivery of information have been discussed, and how journalists can promote the prevention of international conflicts and wars. The issue of the Eurasian Economic Union has been actively discussed. According to Liliya Ananich, First Deputy Minister of Information of Belarus, the media forum is a serious discussion of relevant problems of the modern world, significant discussions about geopolitics, world economy and journalism.

The forum was held on the eve of the 70th anniversary of Belarus’ liberation from Nazi Germany. So the programme contained a lot of events connected with the theme of the Great Patriotic War. The participants placed wreaths at the monument on the Victory Square in Minsk and visited the ‘Stalin Line’ Historical and Cultural Complex. The first ‘Minsk — Heart of Belarus’ expert-session, held in the City Hall, discussed the theme of preservation of historical truth. Nikolay Ladutko, Chairman of the Minsk’s City Council, told about the opening of a new museum of history of the Great Patriotic War, as well as about the fact that Alexander Lukashenko, President of Belarus, took part in the laying of the memorial complex at the place of the ‘Trostenets’ Death Camp near Minsk. They couldn’t overlook the fact that sometimes, truth about events of the war is distorted. Rizvana Sadykova, a guest from Kazakhstan, a granddaughter of four participants of the Great Patriotic War and a grand-niece of Khasan Mamutov, Hero of the Soviet Union, who had liberated Belarus, said that the mission of a journalist is to not allow the rewriting of history.

The work didn’t isolate itself in a narrow circle of specialists. Masters of the pen and the microphone gave master classes in the ‘Summer School of Journalism’. Leonid Mlechin, Diplomatic Analyst, Master of a TV programme on the ‘TV Tsentr’ channel, explained to young people that it’s impossible to work as a journalist without wanting to first find and then to tell other people about something unknown. A real journalist can’t hide from the eternal question of his profession — “And what useful thing have you done for people?”

The ‘Belarus Hospitable’ expert-session became the finishing event, and as 2014 had been declared the Year of Hospitality, guests could get acquainted with the sights of our country and learn better the culture of the Belarusian people.