Whose prediction is more exact

The exit poll questions voters when they leave the polling station

The exit poll questions voters when they leave the polling station. Sociologists encourage this as a prediction of the progress of election results before preliminary data is officially announced. This has proved to be a very reliable method. 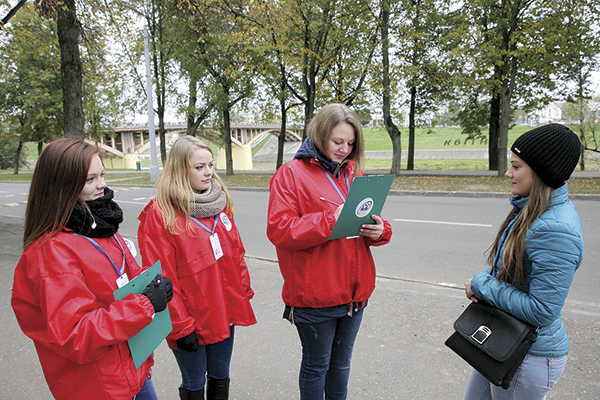 Three electoral districts were centred in the Sports Centre for Children and Youth in Minsk’s Frunzensky District. Unsurprisingly, it was full of people from early in the morning. The Belarusian State University Students — Artem Sapryko, Lina Rovenskaya and Yulia Kuzmich — represented the Eurasian Barometer Institute of Comparative Social Studies headquartered in Vienna. It’s one of the three organisations authorised to conduct exit polls during the Belarusian election campaign. No commentary is allowed until the end of the poll; otherwise, this might be viewed as propaganda on the Election Day.

Most voters answered the interviewers’ questions willingly. In turn, the information was sent hourly to their office for processing. Data from other districts was also collected. Professor Christian Herpfer — the Director of the Eurasian Barometer Institute of Comparative Social Studies — personally supervised the work of his staff. Specialists worked at 303 stations countrywide; three people to each of them. “This is our first exit poll in Belarus. Our organisation is represented by a strong team. We liaise with 13 universities, co-operating with 17 leading professors. Results of our polls are among the most accurate in Europe: the discrepancy with the official data is within the statistics: plus or minus three per cent,” Mr. Herpfer said, sharing his impressions on the election process, “I appreciate that your election campaign is run peacefully. Voters are calm and positive. They feel confident and can openly express their opinions.”

Apart from the Eurasian Barometer, exit polls were also conducted by the National Academy of Sciences’ Sociology Institute and the Youth Laboratory of Sociological Studies at the Belarusian Committee of Youth Organisations. “We receive all the figures from the stations in a coded form. Our staff does not name the station but inform us using certain codes. Only a limited number of people have the key: these are the heads of the laboratory which makes the calculations,” explained Alesya Vinnik, the Deputy Head of the Youth Laboratory. The rules are strictly followed and help to avoid manipulation and abuse in the system.
Заметили ошибку? Пожалуйста, выделите её и нажмите Ctrl+Enter